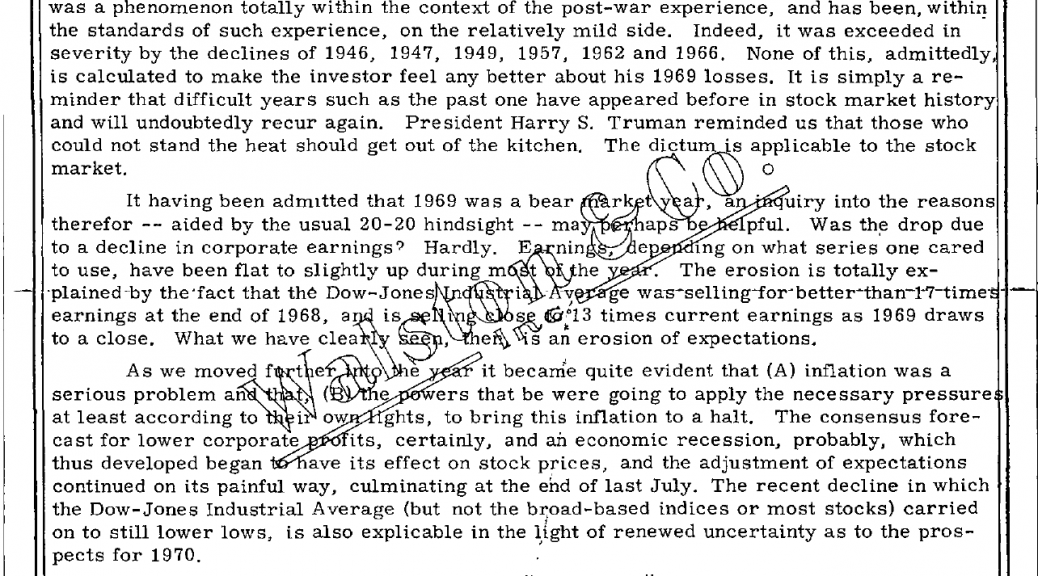 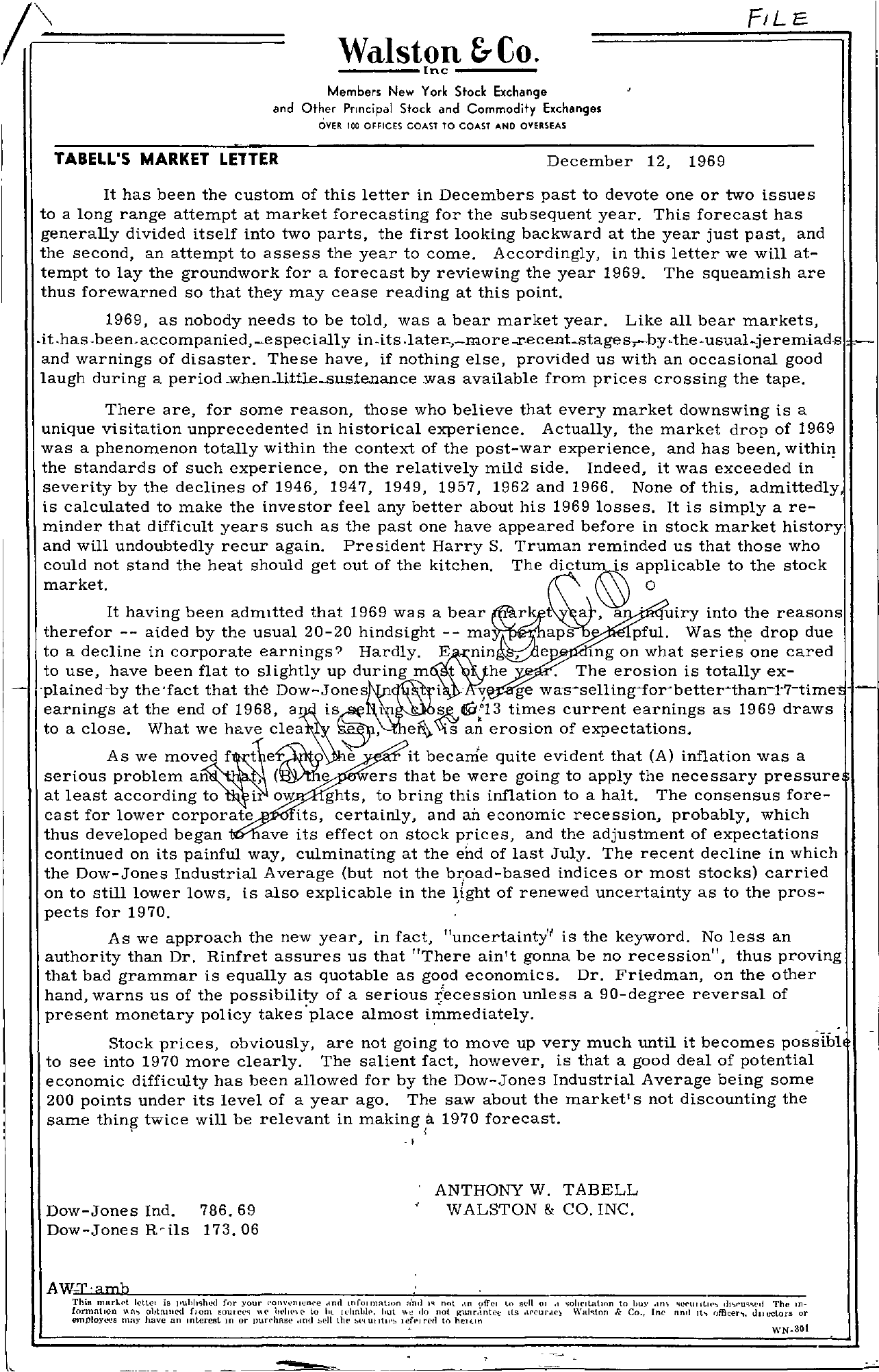 Walston &Co. Inc Members New York Stock Exchange and Other PrlOcipal Stock and Commodity Exchange. OVER 100 OFFICES COAST TO COAST AND OVERSEAS FIL E. TABELL'S MARKET LETTER December 12, 1969 It has been the custom of this letter in Decembers past to devote one or two issues to a long range attempt at market forecasting for the subsequent year. This forecast has generally divided itself into two parts, the first looking backward at the year just past, and the second, an attempt to assess the year to come. Accordingly, in this letter we will attempt to lay the groundwork for a forecast by reviewing the year 1969. The squeamish are thus forewarned so that they may cease reading at this point. 1969, as nobody needs to be told, was a bear market year. Like all bear markets, .it.has.been.accompanied, e specially in.its .lateI'.,-more the .usual-jererniadB , and warnings of disaster. These have, if nothing else, provided us with an occasional good laugh during a period w.h.en.litle-BllSienance was available from prices crossing the tape. There are, for some reason, those who believe that every market downswing is a unique visitation unprecedented in historical experience. Actually, the market drop of 1969 was a phenomenon totally within the context of the post-war experience, and has been, withil! the standards of such experience, on the relatively mild side. Indeed, it was exceeded in severity by the declines of 1946, 1947, 1949, 1957, 1962 and 1966. None of this, admittedly, is calculated to make the investor feel any better about his 1969 losses. It is simply a re- minder that difficult years such as the past one have appeared before in stock market history and will undoubtedly recur again. President Harry S. Truman reminded us that those who could not stand the heat should get out of the kitchen. The applicable to the stock market. 0 It having been admItted that 1969 was a bearakt a, a uiry into the reasons therefor — aided by the usual 20-20 hindsight — ma aps pful. Was drop due to a decline in corporate earnings Hardly. ,e lng on what series one cared to use, have been flat to slightly up during m t he . The erosion is totally ex- 'plained-by the'fact that the . -'; ge earnings at the end of 1968, to a close. What we have clea V ,40;13 times current earnings as 1969 draws ell;.'0iS' an erosion of expectations. As we t e it becacle quite evident that (A) inflation was a serious problem an ,(milie ers that be were going to apply the necessary pressure at least according to i ow ghts, to bring this inflation to a halt. The consensus fore- cast for lower corporate its, certainly, and an economic recession, probably, which thus developed began ave its effect on stock prices, and the adjustment of expectations continued on its painful way, culminating at the ehd of last July. The recent decline in which the Dow-Jones Industrial Average (but not the br;oad-based indices or most stocks) carried on to still lower lows, is also explicable in the l,ight of renewed uncertainty as to the prospects for 1970. As we approach the new year, in fact, uncertainty'l is the keyword. No less an authority than Dr. Rinfret assures us that There ain't gonna be no recession, thus proving that bad grammar is equally as quotable as good economics. Dr. Friedman, on the other hand, warns us of the possibility of a serious r'ecession unless a 90-degree reversal of present monetary policy takes'place almost immediately. Stock prices, obviously, are not going to move up very much until it becomes possibl to see into 1970 more clearly. The salient fact, however, is that a good deal of potential economic difficulty has been allowed for by the Dow-Jones Industrial Average being some 200 points under its level of a year ago. The saw about the market's not discounting the same thing twice will be relevant in making a. 1970 forecast. i ,. Dow-Jones Ind. 786.69 Dow-Jones R-ils 173.06 ANTHONY W. T ABELL WALSTON & CO. INC. AW-T'amb This mnrJ…('t I('lie! is l,uhh.,hL( fnr your ,'OIWo.'IlICnf'e .-Inll InrOlmabnn ,'nd not ,In offer to ,wll 01 .1 formation \HI' oiJtrl.lll('d flom \\.(' 1,.'111'\(' to It'itnlri,, hut do not l'l'ulIr,inte;;, Its ,lrCUrolC emploYL'l'S may have an mterest m or pun'hnse ,md ;,ell the ;,'I Ulltll';, lcfl red to hC1L1n to huv ,lin WIlI;ton & Co. Ine fln,l It.., The 111ullL'Clors or WN30t '''-'