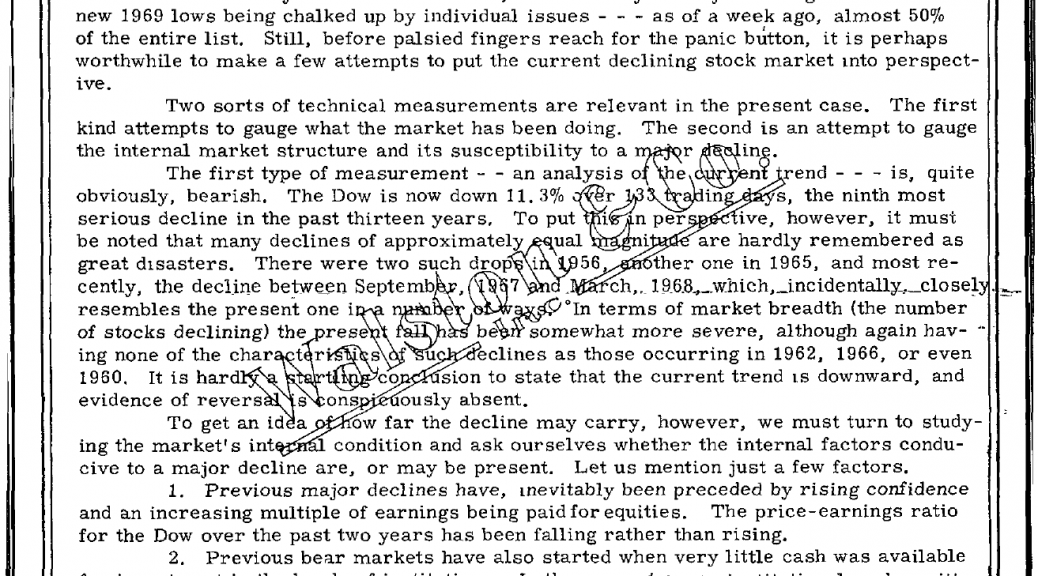 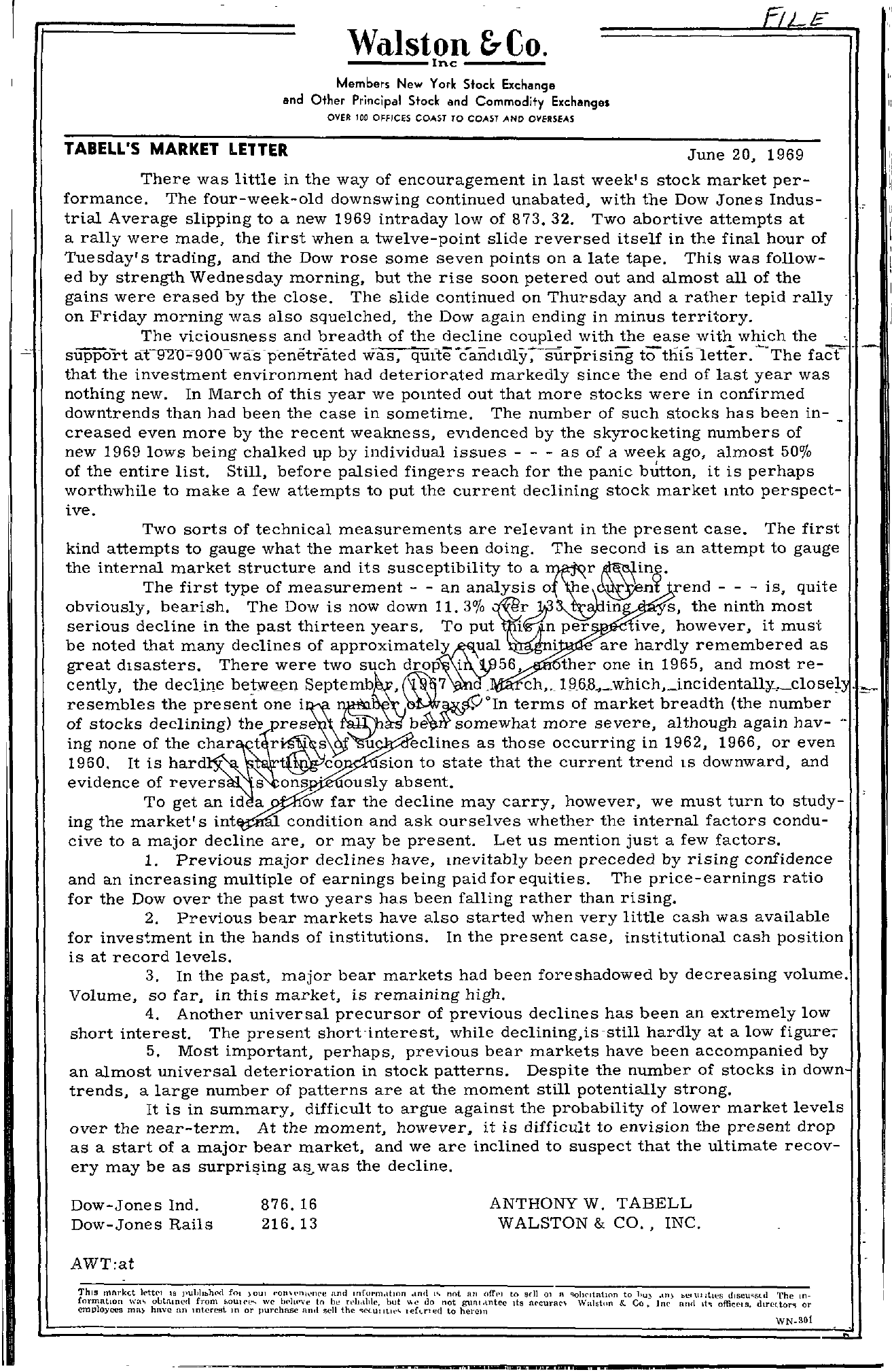 Walston &Co.—–Inc Members New York Stock Exchange and Other Principal Stock and Commodity Exchange. OVER 100 OFFICES COAST TO COAST AND OVERSEAS TABEll'S MARKET lETTER June 20, 1969 There was little in the way of encouragement in last week's stock market per- formance. The four-week-old downswing continued unabated, with the Dow Jones Indus- trial Average slipping to a new 1969 intraday low of 873.32. Two abortive attempts at a rally were made, the first when a twelve-point slide reversed itself in the final hour of Tuesday's trading, and the Dow rose some seven pOints on a late tape. This was follow- ed by strength Wednesday morning, but the rise soon petered out and almost all of the gains were erased by the close. The slide continued on Thursday and a rather tepid rally on Friday morning was also squelched, the Dow again ending in minus territory. The viciousness and breadth of the decline coupled with the ease with which the support ar92-0900-wa-spenetrated was, qUlte-cand1dly-;–surprising toth(s -letfer. fac-C that the investment environment had deteriorated markedly since the end of last year was nothing new. In March of this year we pomted out that more stocks were in confirmed downtrends than had been the case in sometime. The number of such stocks has been in- creased even more by the recent weakness, eV1denced by the skyrocketing numbers of new 1969 lows being chalked up by individual issues – – – as of a week ago, almost 500/0 of the entire list. Still, before palsied fingers reach for the panic bcitton, it is perhaps worthwhile to make a few attempts to put the current declining stock market mto perspect- ive. Two sorts of technical measurements are relevant in the present case. The first kind attempts to gauge what the market has been doing. The second is an attempt to gauge the internal market structure and its susceptibility to a The first type of measurement – – an analysis 0 e On't rend – – – is, quite obviously, bearish. The Dow is now down 11. 30/0 1.13 in s, the ninth most serious decline in the past thirteen years, To put per ive, however, it must be noted that many declines of i are hardly remembered as great d1sasters. There were two such drop i 56, ther one in 1965, and most re- cently, the decline betwe..en R9'57 ch,.196R,which,incidentally,closel. resembles the present one of stocks declining) the rese terms of market breadth (the number more severe, although again hav- .. – ing none of the char t u eclines as those occurring in 1962, 1966, or even 1960. It is hard sion to state that the current trend 1S downward, and evidence of revers sons – ously absent. To get an id a ow far the decline may carry, however, we must turn to study- ing the market's int 1 condition and ask ourselves whether the internal factors condu- cive to a major decline are, or may be present. Let us mention just a few factors. 1. Previous major declines have, mevitably been preceded by rising confidence and an increasing multiple of earnings being paid for equities. The price-earnings ratio for the Dow over the past two years has been falling rather than rising. 2. Previous bear markets have also started when very little cash was available for investment in the hands of institutions. In the present case, institutional cash position is at record levels. 3. In the past, major bear markets had been foreshadowed by decreasing volume. Volume, so far, in this market, is remaining high. 4. Another universal precursor of previous declines has been an extremely low short interest. The present short-interest, while declining,is-still hardly at a low figure7 5. Most important, perhaps, previous bear markets have been accompanied by an almost universal deterioration in stock patterns, Despite the number of stocks in down trends, a large number of patterns are at the moment still potentially strong. It is in summary, difficult to argue against the probability of lower market levels over the near-term, At the moment, however, it is difficult to envision the present drop as a start of a major bear market, and we are inclined to suspect that the ultimate recov- ery may be as surpriEiing aEi- was the decline. Dow-Jones Ind. Dow-Jones Rails 876. 16 216.13 ANTHONY W. TABELL WALSTON & CO., INC. AWTat ThiS mnrk(.t l(tt('l IS \uhhthNI fOI OUI .. and .ind 1, not an offl to edl 01 a ''If)h(,ltation to hu) .lIt The In- (ormatIOn WlI, obtained from we iwh,'c to be rO,IMhle, but \\1.' do not gunl.lntcc Its \alston &. Co. Jnr an.l It; officcls. dlrcttor, or employees rna) have an Interest In or purchase nll'\ !;ell the Ietrl cd to herein