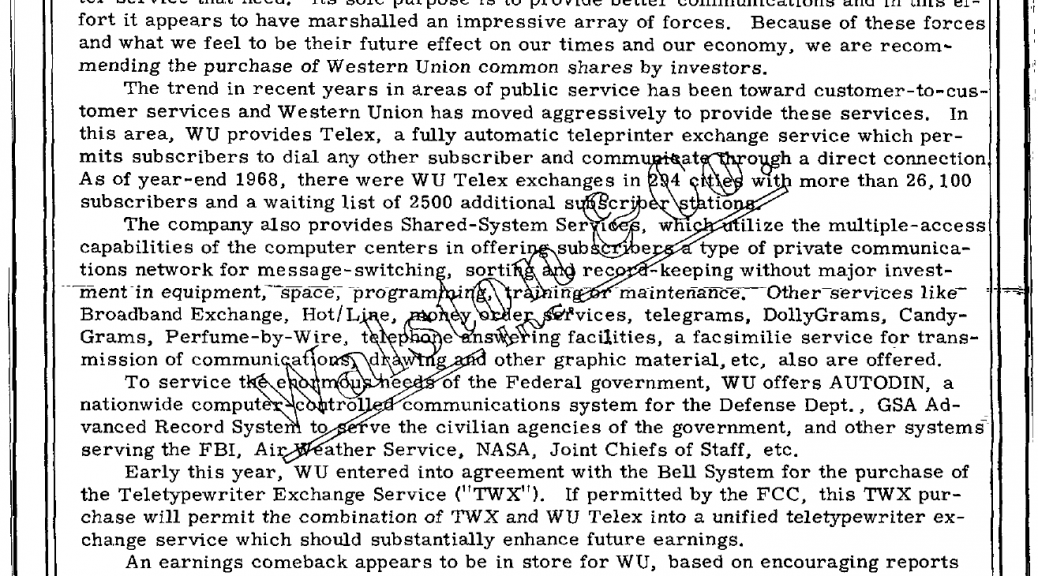 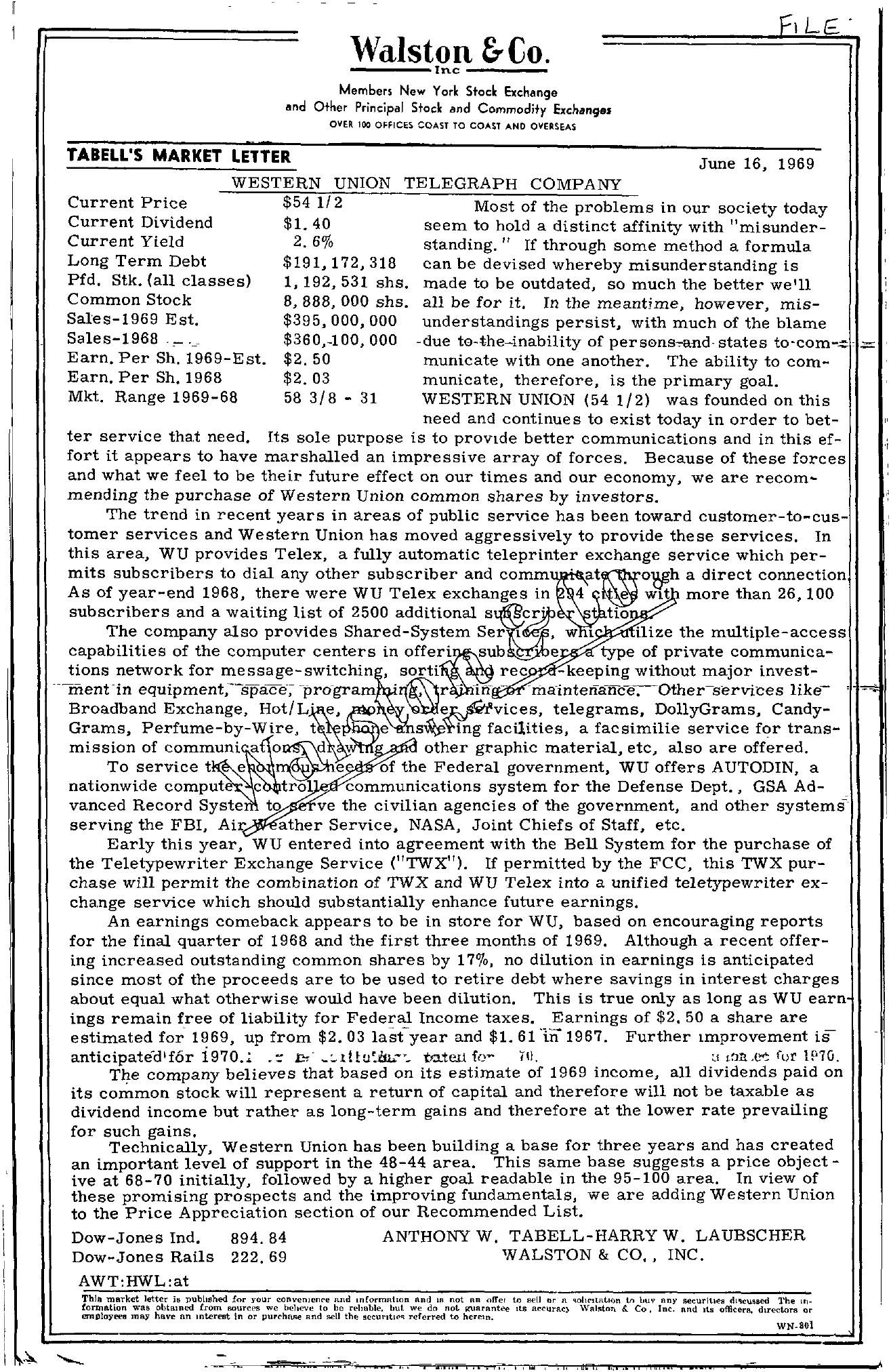 Walston &CO. —-Inc —– Members New York Stock Exchange and Other Principal Stock and Commodity Exchanges OVER 100 OFFICES COAST TO COAST AND OVERSEAS 1 L r;. . lABEll'S MARKET lETTER June 16, 1969 WESTERN UNION TELEGRAPH COMPANY Current Price Current Dividend Current Yield Long Term Debt Pfd. Stk. (all classes) Common Stock SaleS-1969 Est. Sales-1968 .,… . Earn. Per Sh. 1969-Est. 54 112 Most of the problems in our society today 1. 40 seem to hold a distinct affinity with misunder- 2.6 standing. If through some method a formula 191,172,318 can be devised whereby misunderstanding is 1,192,531 shs. made to be outdated, so much the better we'll 8,888,000 shs. all be for it. In the meantime, however, mis- 395,000,000 understandings persist, with much of the blame 360,-100,000 -due to-the-inability of persons.,.and states 2.50 municate with one another. The ability to com- Earn. Per Sh. 1968 Mkt. Range 1969-68 2.03 58 3/8 – 31 municate, therefore, is the primary goal. WESTERN UNION (54 1/2) was founded on this need and continues to exist today in order to bet- ter service tha.t need. Its sole purpose is to provlde better communications and in this ef- fort it appears to have marshalled an impressive array of forces. Because of these forces and what we feel to be their future effect on our times and our economy, we are recom- mending the purchase of Western Union common shares by investors. The trend in recent years in areas of public service has been toward customer-to-cus- tomer services and Western Union has moved aggressively to provide these services. In this area, WU provides Telex, a fully automatic teleprinter exchange service which per- mits subscribers to dial any other subscriber and a direct connection As of year-end 1968, there were WU Telex exchanges in 4 Wlt more than 26, 100 subscribers and a waiting list of 2500 additional tio The company also provides Shared-System Ser w 1 ilize the multiple-access capabilities of the computer centers in sub e type of private communica- tions network for .-rec -keeping without major invest- – Grams, Perfume-by-Wire, t e facUities, a facsimilie service for trans- mission of communi a other graphic material, etc, also are offered. To service t e of the Federal government, WU offers AUTODIN, a nationwide comput c trol communications system for the Defense Dept., GSA Ad- vanced Record Syste to ve the civilian agencies of the government, and other systems serving the FBI, Air ather Service, NASA, Joint Chiefs of Staff, etc. Early this year, WU entered into agreement with the Bell System for the purchase of the Teletypewriter Exchange Service (TWX). If permitted by the FCC, this TWX pur- chase will permit the combination of TWX and WU Telex into a unified teletypewriter ex- change service which should substantially enhance future earnings. An earnings comeback appears to be in store for WU, based on encouraging reports for the final quarter of 1968 and the first three months of 1969. Although a recent offer- ing increased outstanding common shares by 17, no dilution in earnings is anticipated since most of the proceeds are to be used to retire debt where savings in interest charges about equal what otherwise would have been dilution. This is true only as long as WU earn ings remain free of liability for Federal Income taxes. Earnings of 2. 50 a share are estimated for' 1969, up from 2.03 lasfyear and 1. 61'1.n 1967. Further lmprovement is anticipated'for i970.; . z;,' to..tet1 fo- 711. ,n1Llw'; for lP7G. The company believes that based on its estimate of 1969 income, all dividends paid on its common stock will represent a return of capital and therefore will not be taxable as dividend income but rather as long-term gains and therefore at the lower rate prevailing for such gains. Technically, Western Union has been building a base for three years and has created an important level of support in the 48-44 area. This same base suggests a price objective at 68-70 initially, followed by a higher goal readable in the 95-100 area. In view of these promising prospects and the improving fundamentals, we are adding Western Union to the Price Appreciation section of our Recommended List. Dow-Jones Ind. 894.84 Dow-Jones Rails 222.69 ANTHONY W. TABELL-HARRY W. LAUBSCHER WALSTON & CO., INC. AWTHWLat Thill market letter is published for your convenJ('n('e and m(ormnhon nnd Ifl not an offer to sell or n 'IOliCltllt(m to LuI' any securll1021l The In- formation was obtained from sources we h(!1ieve to be r(!lIable. hut WI'! do not !(\Iarantee Its \Val!rton &. Co. Inc. nnd Its officers. directors or employees may have an mterest In or purchase and sell thi'! SCCUfitleo; referred to herein. WN-8() ii.' r . , , …. , -, I, ,u; ,' . .11,