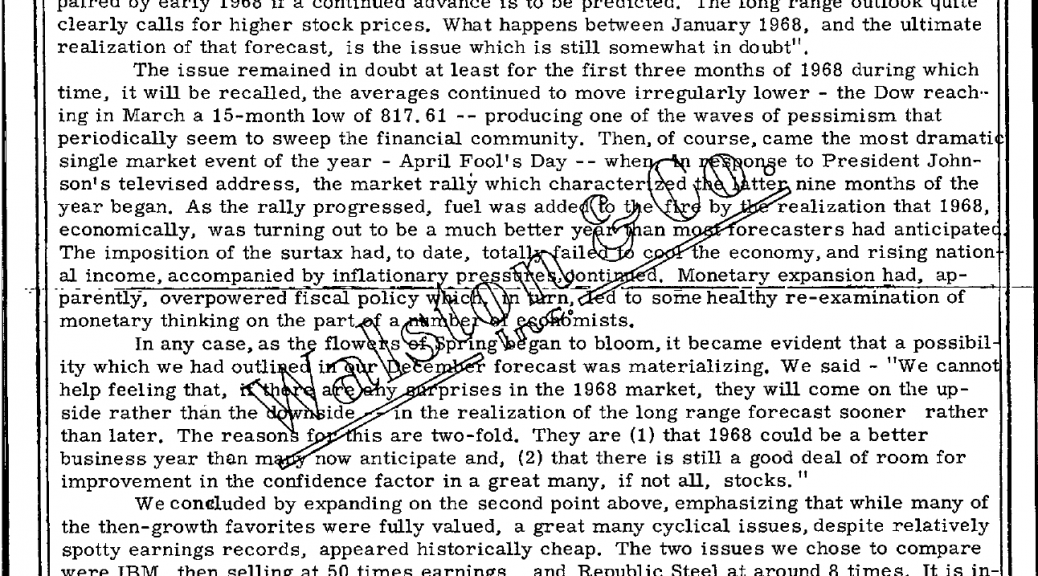 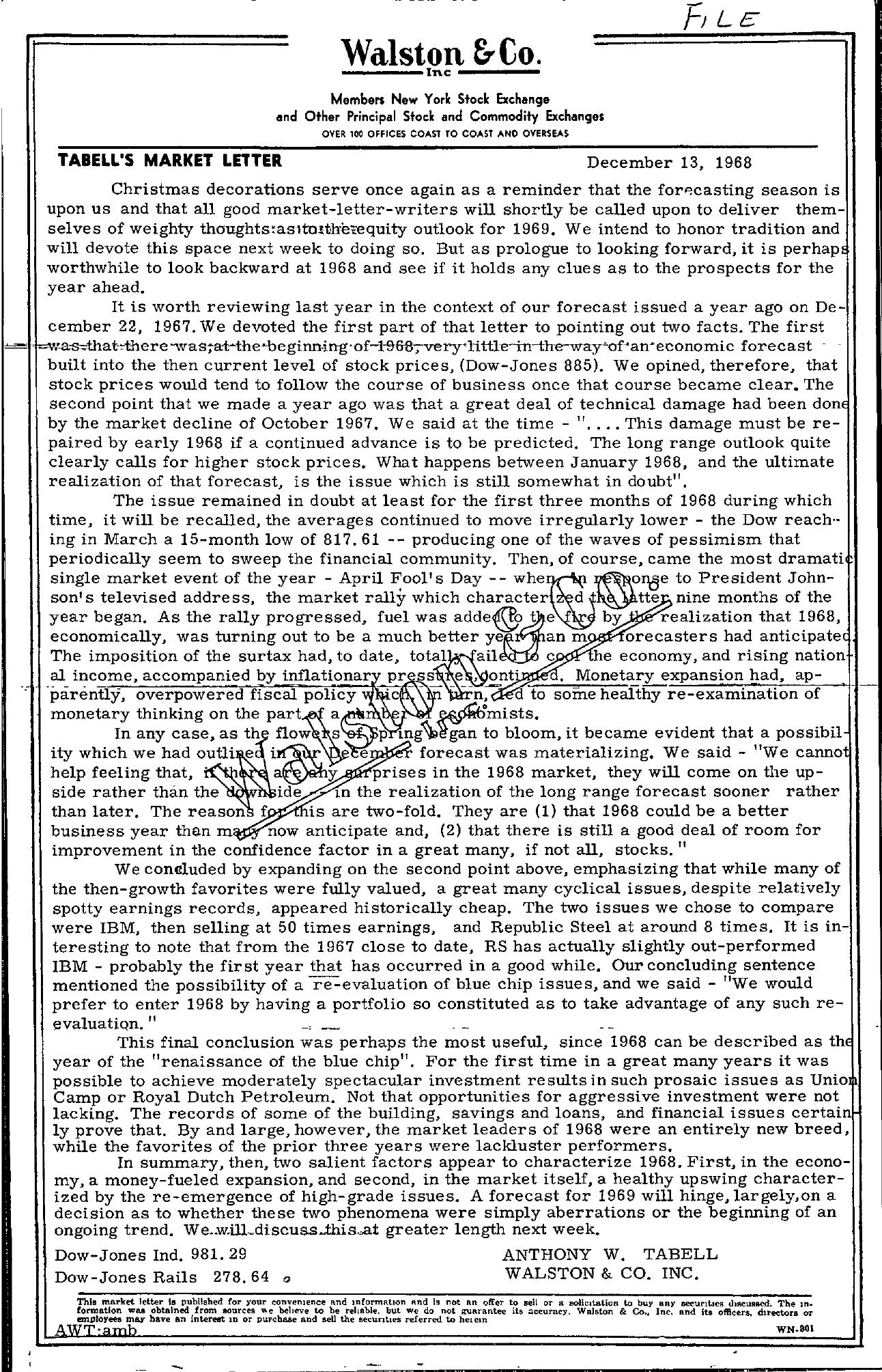 Walston &- Co.– Inc Members New York Stock Exchange and Other Principel Stock end Commodity Exchanges OVER 100 OFFICES COAST TO COAST AND OVERSEAS TABELL'S MARKET LETTER December 13, 1968 Christmas decorations serve once again as a reminder that the season is upon us and that all good market-letter-writers will shortly be called upon to deliver them- selves of weighty thoughtsasltmth'erequity outlook for 1969. We intend to honor tradition and will devote this space next week to doing so. But as prologue to looking forward, it is perhap worthwhile to look backward at 1968 and see if it holds any clues as to the prospects for the year ahead. It is worth reviewing last year in the context of our forecast issued a year ago on De- cember 22, 1967. We devoted the first part of that letter to pointing out two facts. The first -'- forecast built into the then current level of stock prices, (Dow-Jones 885). We opined, therefore, that stock prices would tend to follow the course of business once that course became clear. The second point that we made a year ago was that a great deal of technical damage had been don by the market decline of October 1967. We said at the time – …. This damage must be re- paired by early 1968 if a continued advance is to be predicted. The long range outlook quite clearly calls for higher stock prices. What happens between January 1968, and the ultimate realization of that forecast, is the issue which is still somewhat in doubt. The issue remained in doubt at least for the first three months of 1968 during which time, it will be recalled, the averages continued to move irregularly lower – the Dow reach ing in March a 15-month low of 817.61 — producing one of the waves of pessimism that periodically seem to sweep the financial community. Then, of course, came the most dramati single market event of the year – April Day — to President John- son's televised address, the market rally which character d nine months of the year began. As the rally progressed, fuel was adde!1teby realizationthat1968' economically, was turning out to be a much better ye an m orecasters had anticipate The imposition of the surtax had, to date, c he economy, and riSing nation —-c – — -al income, accompanied by inflationa pre s e, ont' . Monetary expansion had, ap- -inirently, overpowered fiscal policy a to some heafihy re-examination of monetary thinking on the In any case, as th flow s p to bloom, it became evident that a possibil ity which we had outli e e forecast was materializing. We said – We canno help feeling that, – prises in the 1968 market, they will come on the up- side rather than the ide m the realization of the long range forecast sooner rather than later. The reason f is are two-fold. They are (1) that 1968 could be a better business year than m now anticipate and, (2) that there is still a good deal of room for improvement in the confidence factor in a great many, if not all, stocks. We conduded by expanding on the second point above, emphasizing that while many of the then-growth favorites were fully valued, a great many cyclical issues, despite relatively spotty earnings records, appeared historically cheap. The two issues we chose to compare were IBM, then selling at 50 times earnings, and Republic Steel at around 8 times. It is interesting to note that from the 1967 close to date, RS has actually slightly out-performed IBM – probably the first year that has occurred in a good while. Our concluding sentence mentioned the possibility of a re-evaluation of blue chip issues, and we said – We would prefer to enter 1968 by having a portfolio so constituted as to take advantage of any such re- evaluatiQn. This final conclusion was perhaps the most useful, since 1968 can be described as th year of the renaissance of the blue chip. For the first time in a great many years it was possible to achieve moderately spectacular investment results in such prosaic issues as Unio Camp or Royal Dutch Petroleum. Not that opportunities for aggressive investment were not lacking. The records of some of the building, savings and loans, and financial issues certain ly prove that. By and large, however, the market leaders of 1968 were an entirely new breed, while the favorites of the prior three years were lackluster performers. In summary, then, two salient factors appear to characterize 1968. First, in the economy, a money-fueled expansion, and second, in the market itself, a healthy upswing characterized by the re-emergence of high-grade issues. A forecast for 1969 will hinge, largely,on a decision as to whether these two phenomena were simply aberrations or the beginning of an ongoing trend. Wew.ilLdiscuss..this.,at greater length next week. Dow-Jones Ind. 981. 29 Dow-Jones Rails 278.64 ANTHONY W. TABELL WALSTON & CO. INC. This market letter 115 published for your conveDience Ilnd mformatlon II,nd Is not nn offer to sell or a SGlicltation to buy any seeUritleB thscuued. The Information was obtained from Bourees \lot' believe to be reliable, but we do not guarantee its accuracy, Walston & Co., Inc. Rnd its officers.. dIrectors or employees may have an interest In or purchase and sell the secuntaes referred to helem