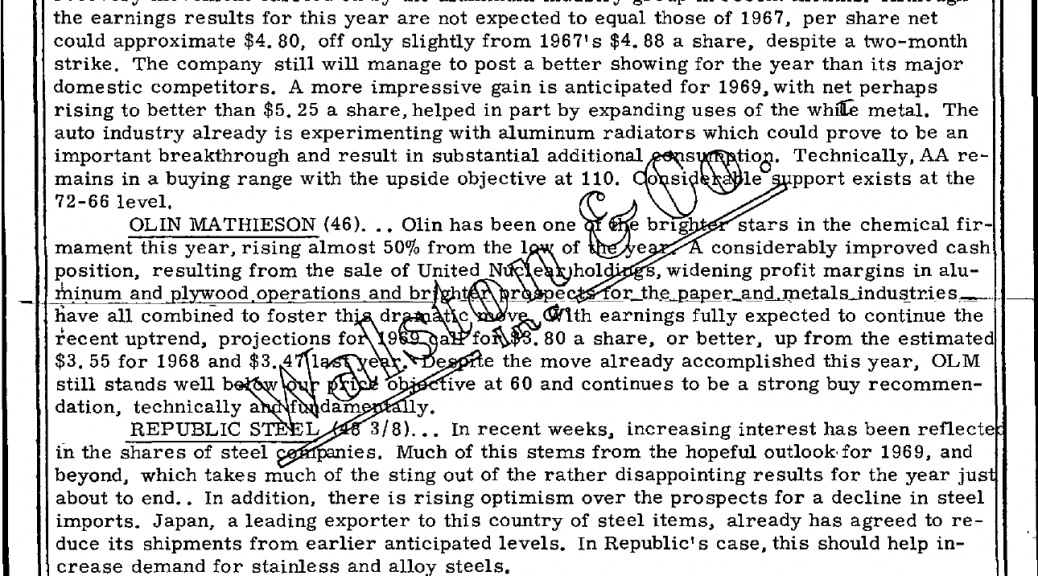 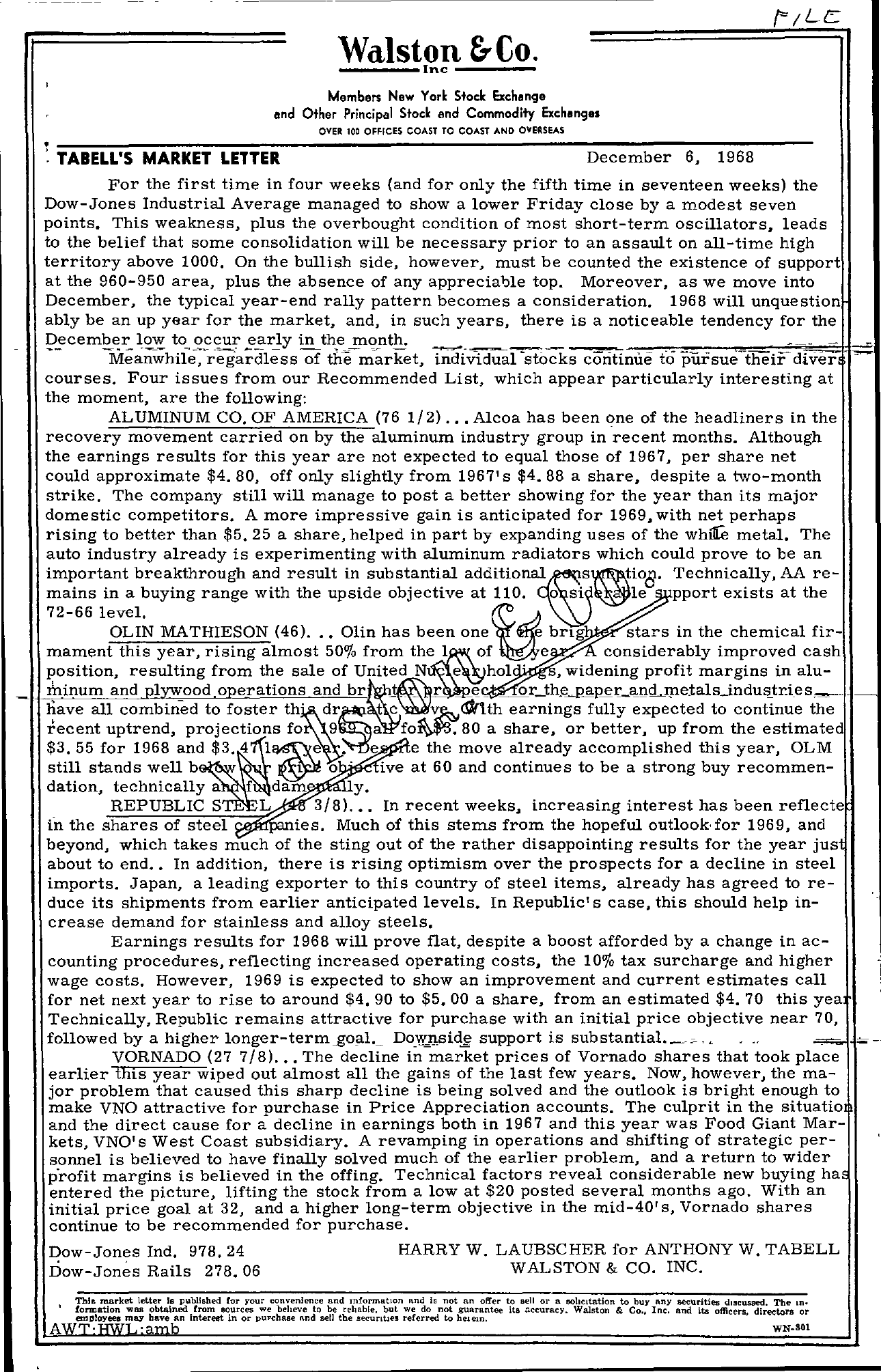 Walston &Co. Inc Members New York Stock Exchonge ond Other Principal Stock and Commodity Exchonge. OVER 100 OFFICES COAST TO COAST AND OVERSEAS FILe For the first time in four weeks (and for only the fifth time in seventeen weeks) the Dow-Jones Industrial Average managed to show a lower Friday close by a modest seven pOints. This weakness, plus the overbought condition of most short-term oscillators, leads to the belief that some consolidation will be necessary prior to an assault on all-time high territory above 1000. On the bullish side, however, must be counted the existence of support at the 960-950 area, plus the absence of any appreciable top. Moreover, as we move into December, the typical year-end rally pattern becomes a consideration. 1968 will unquestion ably be an up year for the market, and, in such years, there is a noticeable tendency for the to. ..2,cc u r in th,e Elopth. Meanwhile, regardless of thO;; m-arket, individual 'stocks continue to p-ursue-their di.ver courses. Four issues from our Recommended List, which appear particularly interesting at the moment, are the following ALUMINUM CO. OF AMERICA (76 1/2) … Alcoa has been one of the headliners in the recovery movement carried on by the aluminum industry group in recent months. Although the earnings results for this year are not expected to equal those of 1967, per share net could approximate 4.80, off only slightly from 1967' s 4.88 a share, despite a two-month strike. The company still will manage to post a better showing for the year than its major domestic competitors. A more impressive gain is anticipated for 1969, with net perhaps rising to better than 5.25 a share, helped in part by expanding uses of the whilie metal. The auto industry already is experimenting with aluminum radiators which could prove to be an important breakthrough and result in substantial Technically, AA re- mains in a buying range with the upside objective at 110. 0 si pport exists at the 72-66 level. OLIN MATHIESON (46).. Olin has been one e brlg stars in the chemical fir- mament this year, rising almost 50 from e considerably improved cash ,osition, resulting from the sale of United N e hoI' s, widening profit margins in alu- minum and pyllrood operations and have all combined to foster dr5 t earnings fully expected to continue the recent uptrend, projections fo 9 a 80 a share, or better, up from the estimated 3.55 for 1968 4 . e e the move already accomplished this year, OLM still stands well b o ive at 60 and continues to be a strong buy recommen- dation, technically a f dam y. REPUBLIC S L 3/8).. In recent weeks, increasing interest has been reflecte fn the shares of steel panies. Much of this stems from the hopeful outlook for 1969, and beyond, which takes much of the sting out of the rather disappointing results for the year jus about to end.. In addition, there is rising optimism over the prospects for a decline in steel imports. Japan, a leading exporter to this country of steel items, already has agreed to re- duce its shipments from earlier anticipated levels. In Republic's case, this should help in- crease demand for stainless and alloy steels. Earnings results for 1968 will prove flat, despite a boost afforded by a change in ac- counting procedures, reflecting increased operating costs, the 10 tax surcharge and higher wage costs. However, 1969 is expected to show an improvement and current estimates call for net next year to rise to around 4.90 to 5.00 a share, from an estimated 4.70 this yea Technically, Republic remains attractive for purchase with an initial price objective near 70, followed by a higher 10nger-termgo9-1. support is – VORNADO (27 7/8). .. The decline in market prices of Vornado shares that took place earlier tlilS year wiped out almost all the gains of the last few years. Now, however, the ma- jor problem that caused this sharp decline is being solved and the outlook is bright enough to make VNO attractive for purchase in Price Appreciation accounts. The culprit in the situatio and the direct cause for a decline in earnings both in 1967 and this year was Food Giant Mar- kets, VNO's West Coast subsidiary. A revamping in operations and shifting of strategic per- sonnel is believed to have finally solved much of the earlier problem, and a return to wider p-rofit margins is believed in the offing. Technical factors reveal considerable new buying ha entered the picture, lifting the stock from a low at 20 posted several months ago. With an initial price goal at 32, and a higher long-term objective in the mid-40's, Vornado shares continue to be recommended for purchase. Dow-Jones Ind. 978.24 Dow-Jones Rails 278.06 HARRY W. LAUBSCHER for ANTHONY W. TABELL WALSTON & CO. INC. ThIB market letter 1& publlshed for your convenience and mformatJOn and Is not an offer to sell or a soliCitation to buy any seeurities diSCussed. The m. formation WBS obtained from sources we beheve to be rehable. but we do not guarantee Ita !1ccuracy. Walston & Co., Inc. and Its officers dlreetol'8 or emDloyees may have an Interest in or Rnd sell the .!!E''UrLtH!! referred to helem, ' A 'a b WN-3'!