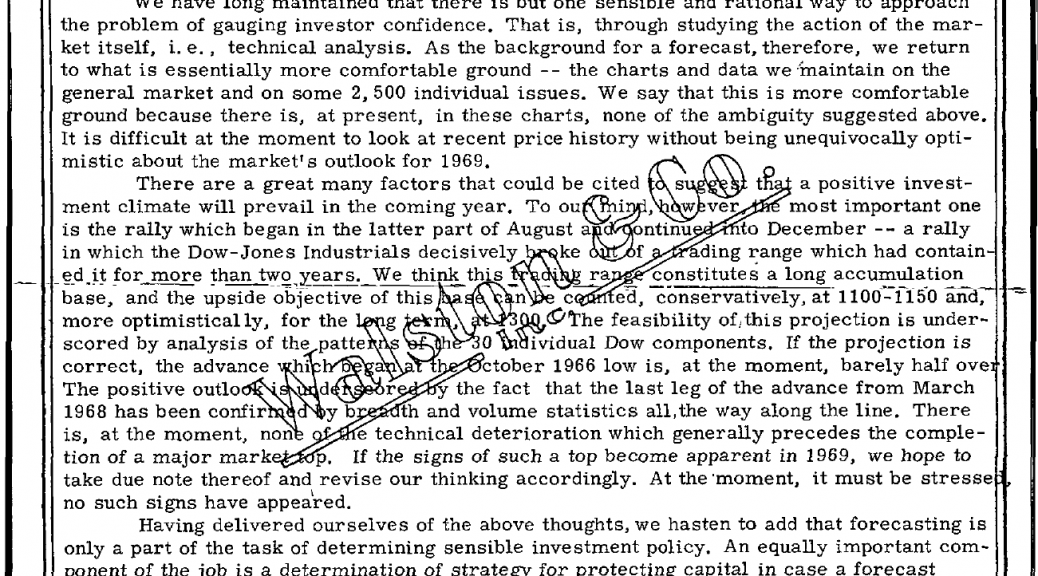 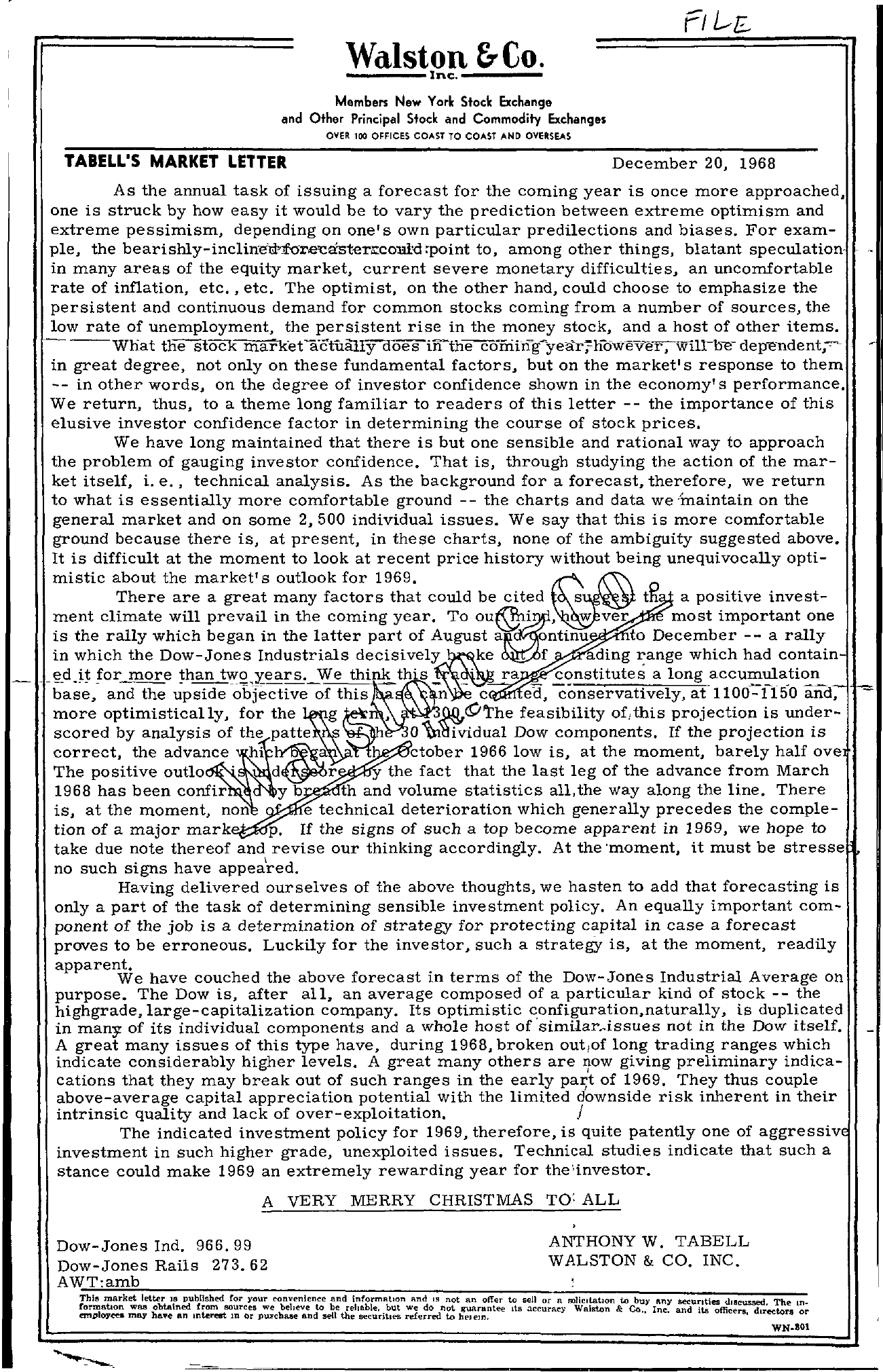 &-Walston Co.- Inc. Members New York Stock Exchange and Other Principal Stock and Commodity Exchange. OVeR 100 OFFICES COAST TO COAST AND OVEfI;SEAS TABELL'S MARKET LETTER December 20, 1968 As the annual task of issuing a forecast for the coming year is once more approached, one is struck by how easy it would be to vary the prediction between extreme optimism and extreme pessimism, depending on one's own particular predilections and biases. For exam- ple, the bearishly-inclirre'l;Pfure'Ctist-erlicomd point to, among other things, blatant speculation in many areas of the equity market, current severe monetary difficulties, an uncomfortable rate of inflation, etc., etc. The optimist, on the other hand, could choose to emphasize the persistent and continuous demand for common stocks coming from a number of sources, the low rate of unemployment, the persistent rise in the money stock, and a host of other items. – –What me stock market-aC'tiliUlydoesiIlthe wlll4Je- dep-endent,'' in great degree, not only on these fundamental factors, but on the market's response to them — in other words, on the degree of investor confidence shown in the economy's performance. We return, thus, to a theme long familiar to readers of this letter — the importance of this elusive investor confidence factor in determining the course of stock prices. We have long maintained that there is but one sensible and rational way to approach the problem of gauging investor confidence. That is, through studying the action of the mar- ket itself, i. e., technical analysis. As the background for a forecast, therefore, we return to what is essentially more comfortable ground — the charts and data we 'maintain on the general market and on some 2,500 individual issues. We say that this is more comfortable ground because there is, at present, in these charts, none of the ambiguity suggested above. It is difficult at the moment to look at recent price history without being unequivocally opti- mistic about the market's outlook for 1969. There are a great many factors that could be cited s tt a positive invest- ment climate will prevail in the coming year. To , w ver most important one is the rally which began in the latter part of August a ontinu to December — a rally in which the Dow-Jones Industrials fading range which had contain- for more than t\V2.;years.We this . …Cnstitutes a long base, and the upside objective n c ea, conservatively, at 1100-ff50 more optimistically, for the g , O'the feasibility of,this projection is under- scored by analysis of the 0 Dow components. If the projection is correct, the advance hi ctober 1966 low is, at the moment, barely half ove The positive outlo . the fact that the last leg of the advance from March 1968 has been confir y b th and volume statistics all,the way along the line. There e technical deterioration which generally precedes the comple- tion of a major mark p. If the signs of such a top become apparent in 1969, we hope to take due note thereof and revise our thinking accordingly. At the'moment, it must be stresse no such signs have appea'red. Having delivered ourselves of the above thoughts, we hasten to add that forecasting is only a part of the task of determining sensible investment policy. An equally important com- ponent of the job is a determination of strategy for protecting capital in case a forecast proves to be erroneous. Luckily for the investor, such a strategy is, at the moment, readily apparent. We have couched the above forecast in terms of the Dow-Jones Industrial Average on purpose. The Dow is, after all, an average composed of a particular kind of stock — the highgrade, large-capitalization company. Its optimistic configuration,naturally, is duplicated in many of its individual components and a whole host of 'similarAs sues not in the Dow itself. A great many issues of this type have, during 1968, broken out,of long trading ranges which indicate considerably higher levels. A great many others are n,ow giving preliminary indica- cations that they may break out of such ranges in the early par;t of 1969. They thus couple above-average capital appreCiation potential with the limited downside risk inherent in their intrinsic quality and lack of over-exploitation. j The indicated investment policy for 1969, therefore, is quite patently one of aggressiv investment in such higher grade, unexploited issues. Technical studies indicate that such a stance could make 1969 an extremely rewarding year for theinvestor. A VERY MERRY CHRISTMAS TO ALL Dow-Jones Ind. 966.99 Dow-Jones Rails 273.62 AWTamb ANTHONY W. TABELL WALSTON & CO. INC. This market lettl!t IS published for your convenience and informRllon Rnd IS not an offer to sell or a mlleltatlon to buy any secUrities dill ussed Th formation WQ!l, obtained from sources we believe to be reliable.. but we do not guarantee Its l.ccurac' Walston & Co Inc. and its emDioyees may have an mterest lD or pUFcblUle and sell the secuntaes referred to helem. d,r toe In8. ec rs or WN.80t '—..