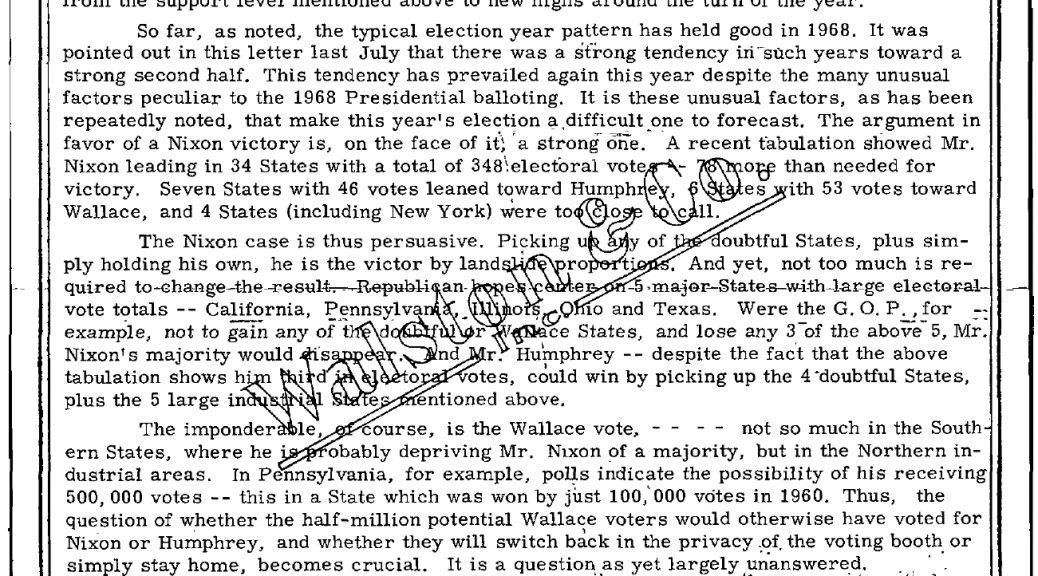 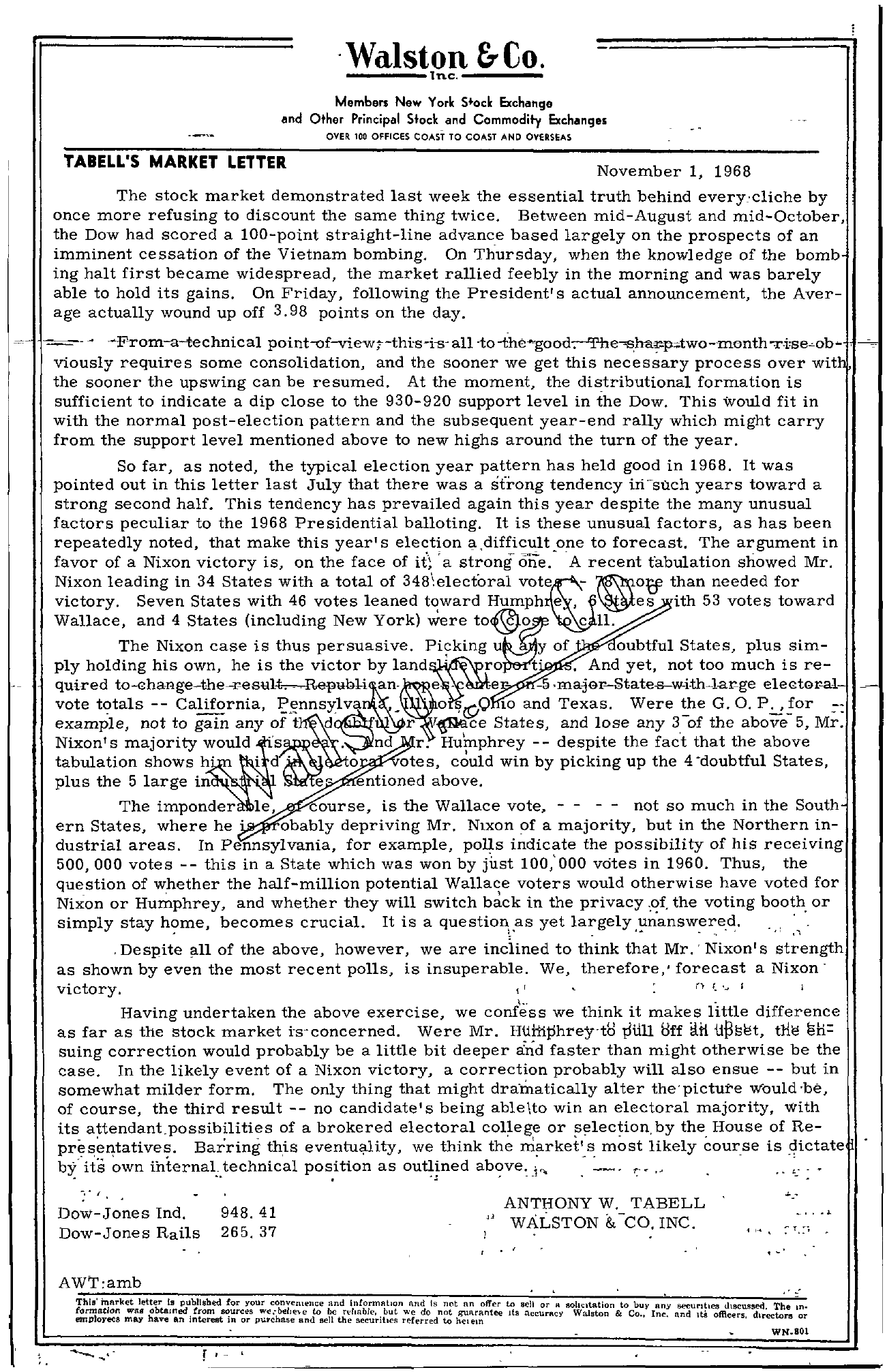 'Walston &Co. —–lnc. —– Membe.. New York Sock Exchange and Other Principal Siock and Commodity Exchange, OVER 100 OFFICES COAST TO COAST AND OVERSEAS TABELL'S MARKET LETTER November 1, 1968 The stock market demonstrated last week the essential truth behind everycliche by once more refusing to discount the same thing twice. Between mid-August and mid-October, the Dow had scored a 100-point straight-line advance based largely on the prospects of an imminent cessation of the Vietnam bombing. On Thursday, when the knowledge of the bomb ing halt first became widespread, the market rallied feebly in the morning and was barely able to hold its gains. On Friday, following the President's actual announcement, the Average actually wound up off 3.98 points on the day. – A -. P.. rom-a–technical point-of-view,-thi's-i-s- all -to viously requires some consolidation, and the sooner we get this necessary process over wit the sooner the upswing can be resumed. At the moment, the distributional formation is sufficient to indicate a dip close to the 930-920 support level in the Dow. This would fit in with the normal post-election pattern and the subsequent year-end rally which might carry from the support level mentioned above to new highs around the turn of the year. So far, as noted, the typical election year pattern has held good in 1968. It was pointed out in this letter last July that there was a strong tendency iIi-stich years toward a strong second half. This tendency has prevailed again this year despite the many unusual factors peculiar to the 1968 Presidential balloting. It is these unusual factors, as has been repeatedly noted, that make this year's election a .difficult,one to forecast. The argument in favor of a Nixon victory is, on the face of 'a strong one. -A recent fabulation showed Mr. Nixon leading in 34 States with a total of 348\electoral than needed for victory. Seven States with 46 votes leaned toward Humph e, ith 53 votes toward Wallace, and 4 States (including New York) were c 11. The Nixon case is thus persuasive. of oubtful States, plus sim- ply holding his own, he is the victor by . And yet, not too much is re- qu-ired – -e -5 electeI'-al- vote totals — California, .0 10 and Texas. Were G, O. P…! !or example, not to gain any of r States, and lose any 3. of the above 5, Mr. Nixon's majority tabulation shows h' sEi i d. 0 r. Humphrey — despite the fact that the above otes, win by picking up the 4'doubtful States, plus the 5 large in . entioned above. The imponder Ie, course, is the Wallace vote, – – – – not so much in the South' ern States, where he . obably depriving Mr. Nlxon of a majority, but in the Northern in- dustrial areas. In Pennsylvania, for example, polls indicate the possibility of his receiving 500,000 votes — this in a State which was won by just 100,'000 votes in 1960. Thus, the .question of w.hether the half-million potential Wallace voters would otherwise have voted for Nixon or Humphrey, and whether they will switch back in the privacy .f, the voting booth, or simply stay ho. me, becomes crucial. It is a questi0Il,as yet largely . – . ,\ .De spite all of the above, however, we are inclined to think that Mr .. Nixon's strength as shown by even the most recent polls, is insuperable. We, therefore,' forecast a Nixon – victory. i r () ( …. j \.. . Having undertaken the above exerCise, we confess we think it makes little difference as far as the stock market is' concerned. Were Mr. Htiitiphrey-t8 pUll 8ff il.tI Mi suing correction would probably be a little bit deeper lind faster than might otherwise be the case. In the likely event of a Nixon victory, a correction probably will also ensue — but in somewhat milder form. The only thing that might dra-matically alter the'picture would'be, of course, the third result — no candidate's being able\to win an electoral majority, with its attendantpossibilities of a brokered electoral college or selection. by the House of Re- ' 't . presentatives. Barring this eventuq.l.ity, we think the market's most likely course is dictate .by'-its . -,' internaL technic'al position as outlined above. ; . . ,… .. -. .!. . .. DOW-Jones Ind. 948.41 Dow-Jones Rails 265. 37 ANTHONY W. TABELL WALSTON &-co. INC. .. .' ; – . .. ' — AW'I'amb Thls'market letter Is published for your convemence and InformRtlon find Is not an offer to sell or It lIOilcltation to buy RY fonnatlon was obtamed rom wc,-oe/U!e to be rl;'itabJe but we do not gul\rantee Its aCcurACY Walston & Co Inc. and ItS officers, director or employec8 may have Interest In or purchase and sell the securities referred to helem II , .. . WN801