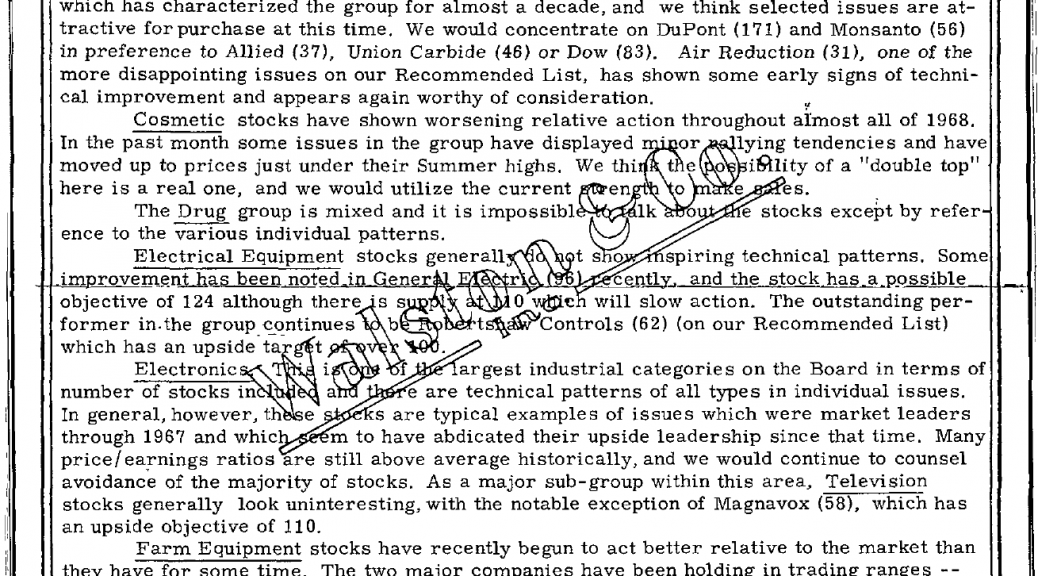 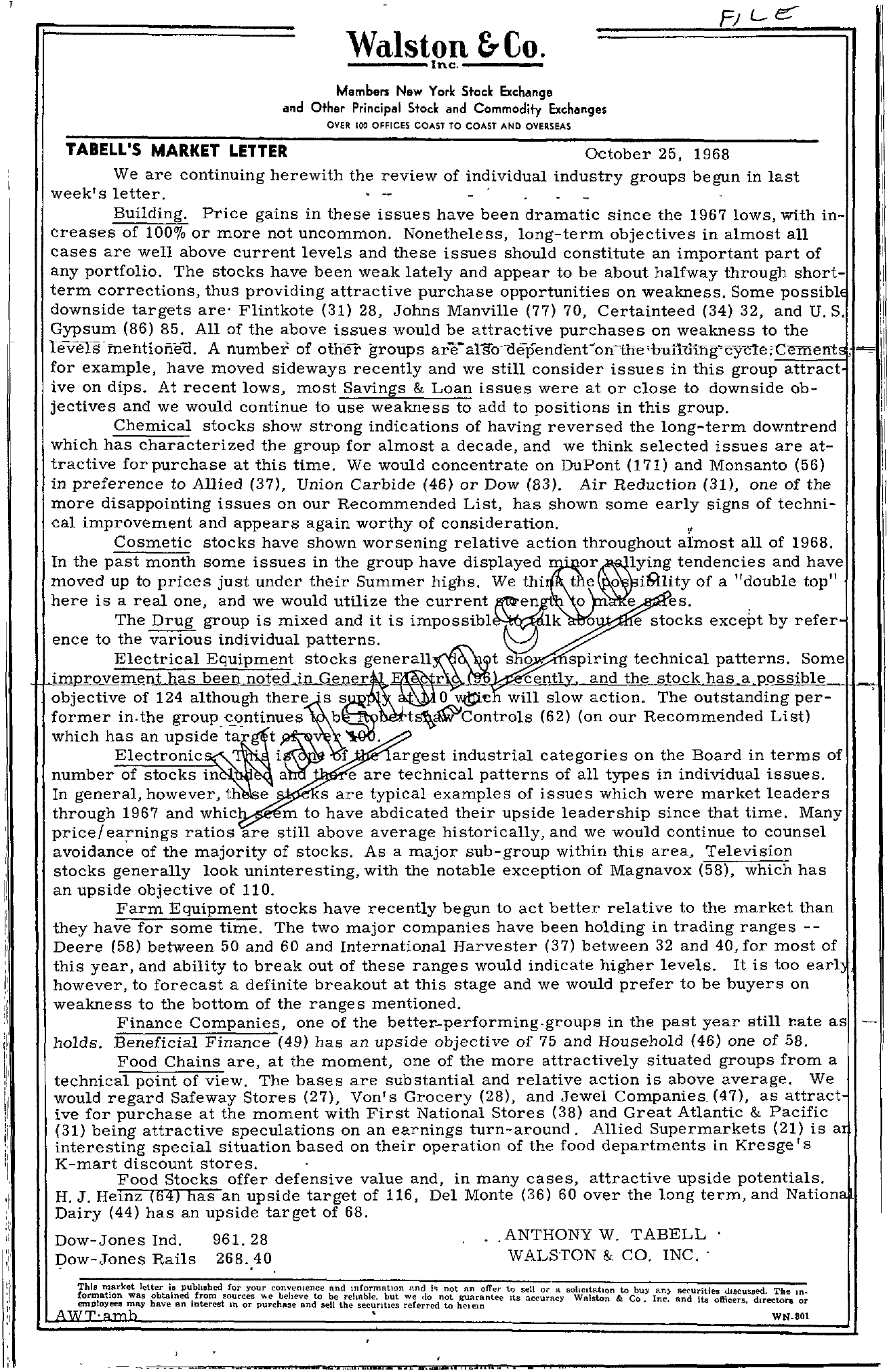 Walston &Co, —';-Inc. – – – – Members New York Stock Exchange and Other Principal Stock and Commodity Exchanges OVER 100 OFFICES COAST TO COAST AND OVERSEAS TABELL'S MARKET LETTER October 25, 1968 We are continuing herewith the review of individual industry groups begun in last week's letter. . Building. Price gains in these issues have been dramatic since the 1967 lows, with increases of 100 or more not uncommon. Nonetheless, long-term objectives in almost all cases are well above current levels and these issues should constitute an important part of any portfolio. The stocks have been weak lately and appear to be about halfway through short- 1 term corrections, thus providing attractive purchase opportunities on weakness. Some possibl downside targets are' Flintkote (31) 28, Johns Manville (77) 70, Certainteed (34) 32, and U. S. ;1' !, Gypsum (86) 85. All of the above issues would be attractive purchases on weakness to the A number of OUler groups for example, have moved sideways recently and we still consider issues in this group attract i'l I' I ive on dips. At recent lows, most Savings & Loan issues were at or close to downside objectives and we would continue to use weakness to add to pOSitions in this group. . Chemical stocks show strong indications of having reversed the long-term downtrend WhlCh has characterized the group for almost a decade, and we think selected issues are at- II' ! I II II tractive for purchase at this time. We would concentrate on DuPont (171) and Monsanto (56) in preference to Allied (37), Union Carbide (46) or Dow (83). Air Reduction (31), one of the ! II more disappointing issues on our Recommended List, has shown some early signs of techni- cal improvement and appears again worthy of consideration. 1 Cosmetic stocks have shown worsening relative action throughout almost all of 1968. I In the past month some issues in the group have displayed . oraYing tendencies and have moved up to prices just under their Summer highs. We thi teo Hrl.lity of a double top here is a real one, and we would utilize the current en 0 e es. . The Drug group is mixed and it is impossibl lk ence to the various individual patterns. Q e stocks except by refer Electrical Equipment stocks generall t spiring technical patterns. Some has been noted in Gener r cently. and the stock has a ppssible objective of 124 although former in.the group.c,ontinues b 0 v.c will slow action. The outstanding per(62) (on our Recommended List) which has an upside ta t Electronic' i . f argest industrial categories on the Board in terms of number of stocks in a e are technical patterns of all types in individual issues. In general, however, th s are typical examples of issues which were market leaders through 1967 and whic m to have abdicated their upside leadership since that time. Many price! earnings ratios are still above average historically, and we would continue to counsel avoidance of the majority of stocks. As a major sub-group within this area, Television stocks generally look uninteresting, with the notable exception of Magnavox (58), which has an upside objective of 110. Farm Equipment stocks have recently begun to act better relative to the market than they have for some time. The two major companies have been holding in trading ranges -Deere (58) between 50 and 60 and International Harvester (37) between 32 and 40, for most of this year, and ability to break out of these ranges would indicate higher levels. It is too earl however, to forecast a definite breakout at this stage and we would prefer to be buyers on weakness to the bottom of the ranges mentioned. Finance Companies, one of the betterperforming.groups in the past year still rate as holds. Beneficial Finance (49) has an upside objective of 75 and Household (46) one of 58. Food Chains are, at the moment, one of the more attractively situated groups from a technical point of view. The bases are substantial and relative action is above average. We would regard Safeway Stores (27), Von's Grocery (28), and Jewel Companies. (47), as attract ive for purchase at the moment with First National Stores (38) and Great Atlantic & Pacific (31) being attractive speculations on an earnings turn-around. Allied Supermarkets (21) is a interesting special situation based on their operation of the food departments in Kresge's K-mart discount stores. Food Stocks offer defensive value and, in many cases, attractive upside potentials. H. J. Hemz (64) has an upside target of 116, Del Monte (36) 60 over the long term, and Nation , Dairy (44) has an upside target of 68. ;J Dow-Jones Ind. 961. 28 . ANTHONY W. TABELL Dow-Jones Rails 268.40 WALSTON & CO. INC .. Thlo market letter is pubhshed for your convemence Rnd mformRtlOn Rnd not nn offer to sell or It soiLcltatlon to buy an)- se.'uritles discussed. The m- formation was obtained from sources v.e beheve to be reliable, but we do not guarantee Its nccuracy Walston & Co. Inc. and iu officers. directors or employee!!! may have an interest In or purchase and sell the seCUrities referred to hClem WN.801 .'Alil,ltG.'''' aI n ….,… ,&'.