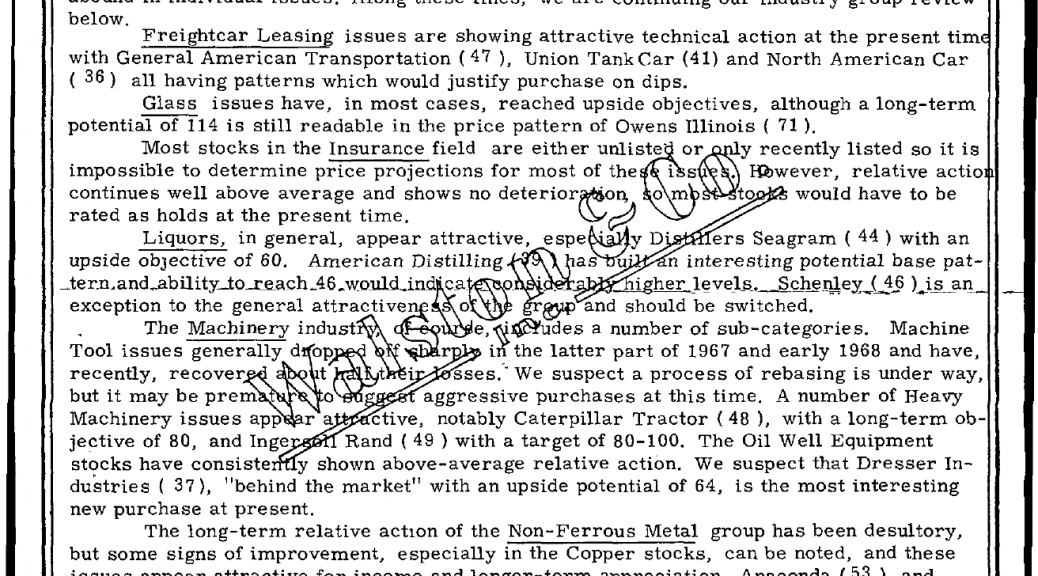 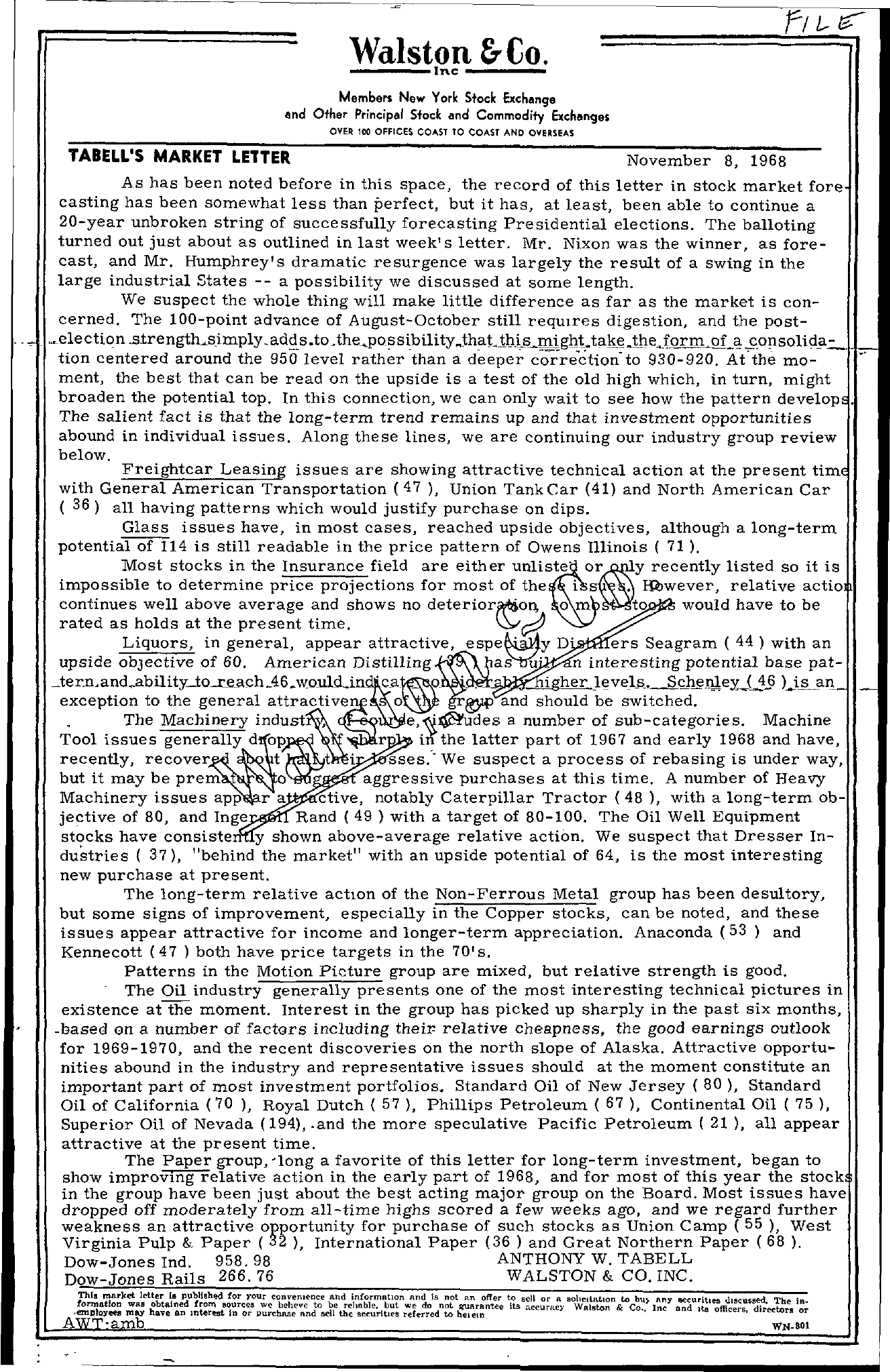 Walston &Co. —-Inc —- Members New York Stock Exch.nge and Other Principal Stock and Commodity Exchange. OVER 100 OFFICES COAST TO COAST AND OVERSEAS TABELL'S MARKET LETTER November 8, 1968 As has been noted before in this space, the record of this letter in stock market fore casting has been somewhat less than perfect, but it has, at least, been able to continue a 20-year unbroken string of successfully forecasting Presidential elections. The balloting turned out just about as outlined in last week's letter. Mr. Nixon was the winner, as fore- cast, and Mr. Humphrey's dramatic resurgence was largely the result of a swing in the large industrial States — a possibility we discussed at some length. We suspect the whole thing will make little difference as far as the market is con- cerned. The 100-point advance of August-October still reqUlres digestion, and the post- election tion centered around the 950 level rather than a deeper coirection to 930-920. At the mo- ment, the best that can be read on the upside is a test of the old high which, in turn, might broaden the potential top. In this connection, we can only wait to see how the pattern develop The salient fact is that the long-term trend remains up and that investment opportunities abound in individual issues. Along these lines, we are continuing our industry group review below. Freightcar Leasing issues are showing attractive technical action at the present tim with General American Transportation (47), Union Tank Car (41) and North American Car ( 36) all having patterns which would justify purchase on dips. Glass issues have, in most cases, reached upside objectives, although a long-term potential of 114 is still readable in the price pattern of Owens Illinois ( 71 ). Most stocks in the Insurance field are either recently listed so it is impossible to determine price projections for most of the i s . H))wever, relative actio continues well above average and shows no rated as holds at the present time. I;yr! 0 m to would have to be Liquors, in general, appear attractive, D' ers Seagram ( 44) with an upside objective of 60. American n interesting potential base pat- ',. ….igher Us aIL exception to the general and should be switched. . The Machinery a number of sub-categories. Machine Tool issues d r in the latter part of 1967 and early 1968 and have, recently, recover t t i sses. We suspect a process of reba sing is under way, but it may be prem 0 aggreSSive purchases at this time. A number of Heavy Machinery issues app r a ctive, notably Caterpillar Tractor (48 ), with a long-term ob- jective of 80, and Inge Rand ( 49 ) with a target of 80-100. The Oil Well Equipment stocks have consiste y shown above-average relative action. We suspect that Dresser In- dustries ( 37), behind the market with an upside potential of 64, is the most interesting new purchase at present. The long-term relative actlOn of the Non-Ferrous Metal group has been desultory, but some signs of improvement, especially in the Copper stocks, can be noted, and these issues appear attractive for income and longer-term appreciation. Anaconda (53) and Kennecott (47 ) both have price targets in the 70' s. Patterns in the Motion Picture group are mixed, but relative strength is good. The Oil industry generally presents one of the most interesting technical pictures in existence at the moment. Interest in the group has picked up sharply in the past six months, ,baseEl on a number of factors including theil' relative cheapness, the good earnings outlook for 1969-1970, and the recent discoveries on the north slope of Alaska. Attractive opportu- nities abound in the industry and representative issues should at the moment constitute an important part of most investment portfoliOS. Standard on of New Jersey ( 80), Standard Oil of California (70 ), Royal Dutch ( 57), Phillips Petroleum ( 67), Continental Oil ( 75 ), Superior Oil of Nevada (194), .and the more speculative Pacific Petroleum ( 21), all appear attractive at the present time. The Paper group, 'long a favorite of this letter for long-term investment, began to show improvmg relative action in the early part of 1968, and for most of this year the stock in the group have been just about the best acting major group on the Board. Most issues have dropped off moderately from all-time highs scored a few weeks ago, and we regard further weakness an attractive opportunity for purchase of such stocks as Union Camp ( 55), West Virginia Pulp &. Paper ( 32), International Paper (36 ) and Great Northern Paper ( 68 ). Dow-Jones Ind. 958.98 Dow-Jones Rails 266.76 ANTHONY W. TABELL WALSTON & CO. INC.