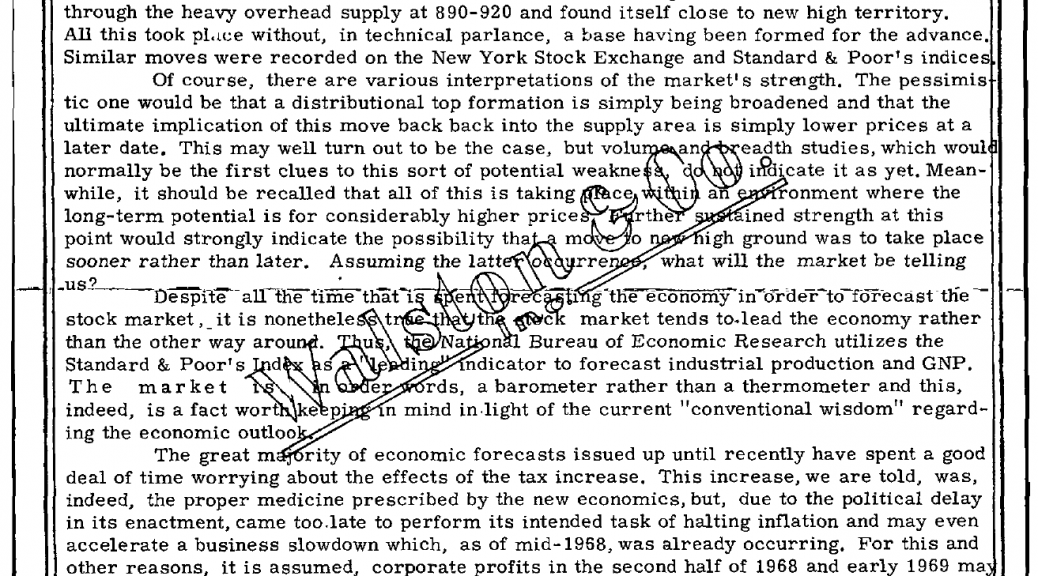 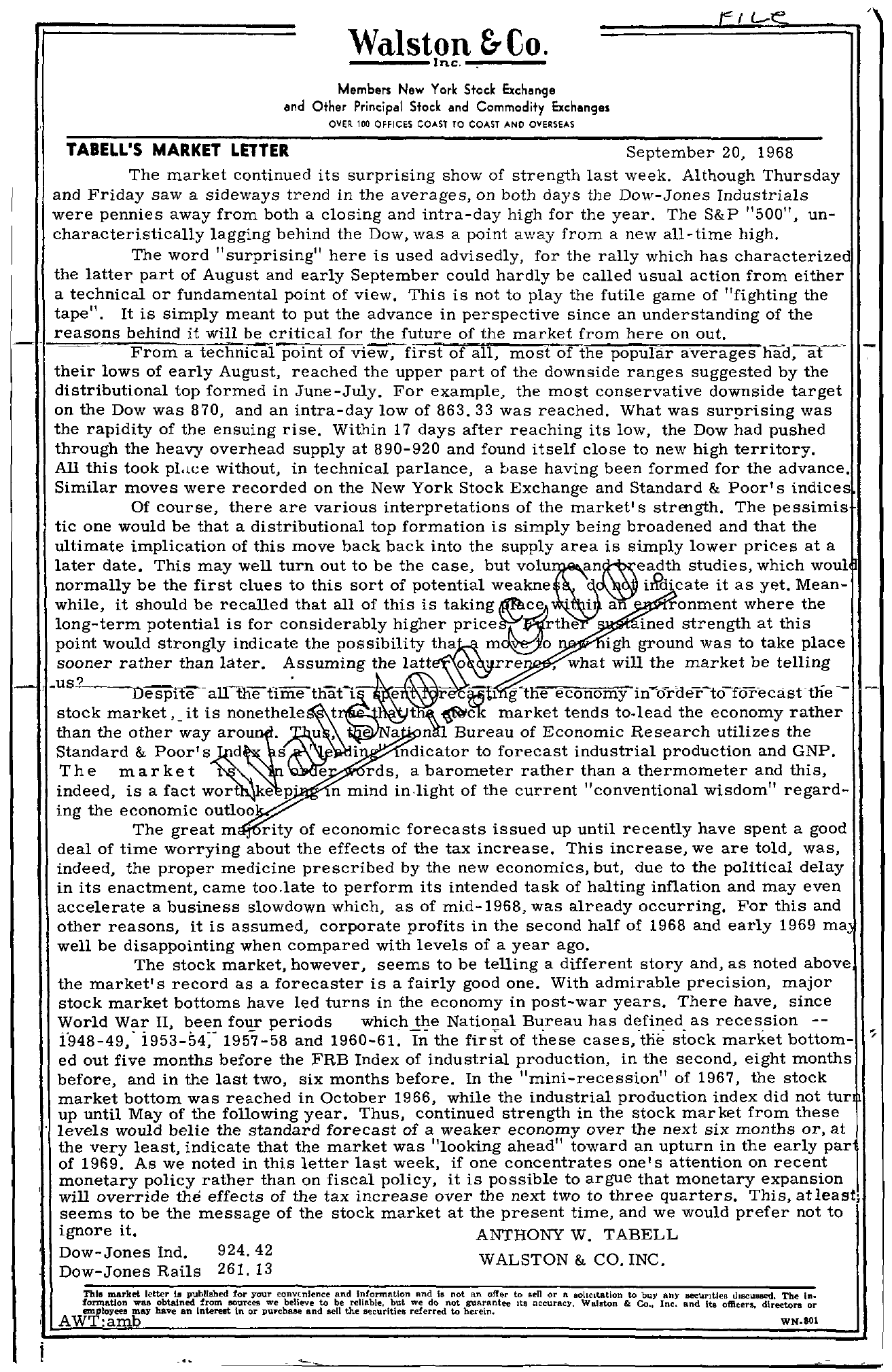 Walston &Co. —–Inc. …,.—- Members New York Stock Exchenge and Other Principal Stock and Commodity Exchange. O …. ER 100 OFFICES COAST TO COAST AND OVERSEAS TABELL'S MARKET LETTER September 20, 1968 The market continued its surprising show of strength last week. Although Thursday and Friday saw a sideways trend in the averages, on both days the Dow-Jones Industrials were pennies away from both a closing and intra-day high for the year. The S&P 500, un- characteristically lagging behind the Dow, was a point away from a newall-time high. The word surprising here is used advisedly, for the rally which has characterized the latter part of August and early September could hardly be called usual action from either a technical or fundamental point of view. This is not to play the futile game of fighting the tape. It is simply meant to put the advance in perspective since an understanding of the reasons behind it will be critical for the future of the market from here on out. — From a technical point of view;-first of ail, most of the popular averages had, at– their lows of early August, reached the upper part of the downside ranges suggested by the distributional top formed in June-July. For example, the most conservative downside target on the Dow was 870, and an intra-day low of 863.33 was reached. What was sur!,rising was the rapidity of the ensuing rise. Within 17 days after reaching its low, the Dow had pushed through the heavy overhead supply at 890-920 and found itself close to new high territory. All this took pl.t.e without, in technical parlance, a base having been formed for the advance. Similar moves were recorded on the New York Stock Exchange and Standard & Poor's indices Of course, there are various interpretations of the market's strEngth. The pessimis tic one would be that a distributional top formation is simply being broadened and that the ultimate implication of this move back back into the supply area is simply lower prices at a later date. This may well turn out to be the case, but normally be the first clues to this sort of potential weakne studies, which woul it as yet. Mean- while, it should be recalled that all of this is taking long-term potential is for considerably higher . i an 'ronment where the rthe ined strength at this point would strongly indicate the possibility m0 High ground was to take place -, .us rather than later. 0 rre ,what will the market be telling – e – r MIl gtlie economy stock market , it is t market tends to.lead the economy rather than the other way Standard & Poor' The market s' e a . n Bureau of Economic Research utilizes the indicator to forecast industrial production and GNP. rds, a barometer rather than a thermometer and this, indeed, is a fact wor ke R' n mind in.light of the current conventional wisdom regard- ing the economic outloo The great m rity of economic forecasts issued up until recently have spent a good deal of time worrying about the effects of the tax increase. This increase, we are told, was, indeed, the proper medicine prescribed by the new economics, but, due to the political delay in its enactment, came too.late to perform its intended task of halting inflation and may even accelerate a business slowdown which, as of mid-1968, was already occurring. For this and other reasons, it is assumed, corporate prOfits in the second half of 1968 and early 1969 ma, well be disappointing when compared with levels of a year ago. The stock market, however, seems to be telling a different story and, as noted above the market's record as a forecaster is a fairly good one. With admirable precision, major stock market bottoms have led turns in the economy in post-war years. There have, since InWorld War II, been four periods which the National Bureau has defined as receSSion — f948-49,' i953-54;- 1957-58 and 1960-61. the first of these cases, the stock market bottom- ed out five months before the FRB Index of industrial production, in the second, eight months before, and in the last two, six months before. In the mini-recession of 1967, the stock market bottom was reached in October 1966, while the industrial production index did not tur up until May of the following year. Thus, continued strength in the stock market from these ,. levels would belie the standard forecast of a weaker economy over the next six months or, at the very least, indicate that the market was looking ahead toward an upturn in the early par of 1969. As we noted in this letter last week, if one concentrates one's attention on recent monetary policy rather than on fiscal policy, it is possible to argue that monetary expansion will override the effects of the tax increase over the next two to three quarters. This, at least; seems to be the message of the stock market at the present time, and we would prefer not to ignore it. ANTHONY W. TABELL Dow-Jones Ind. 924.42 Dow-Jones Rails 261. 13 WALSTON & CO INC .. Thill market letter ill published tor your convenience and Informfltlon Rnd Is not an oft'.,.r to sell or a sollt'!ltation to buy any secUrities lhscusaed. The In. formation was obtained from sources we believe to be reliable. hut we do not guarantee Its accuracy. Walston & Co., Inc. and its officen. directors or m.!Itoyeee may have an Interest In or pUFcbase Bnd sell the referred to hereln. AW'l amb WN.801 i