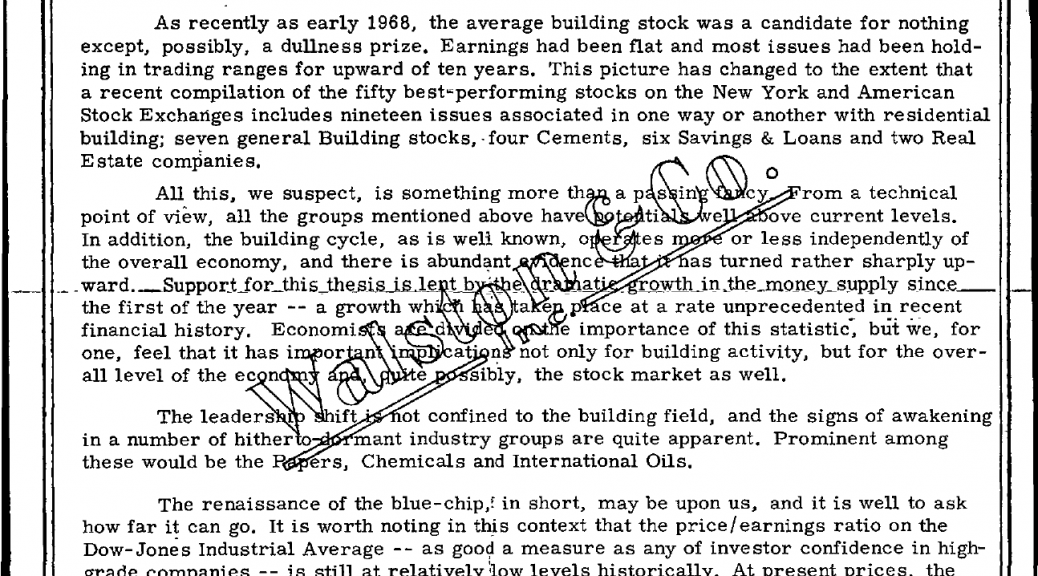 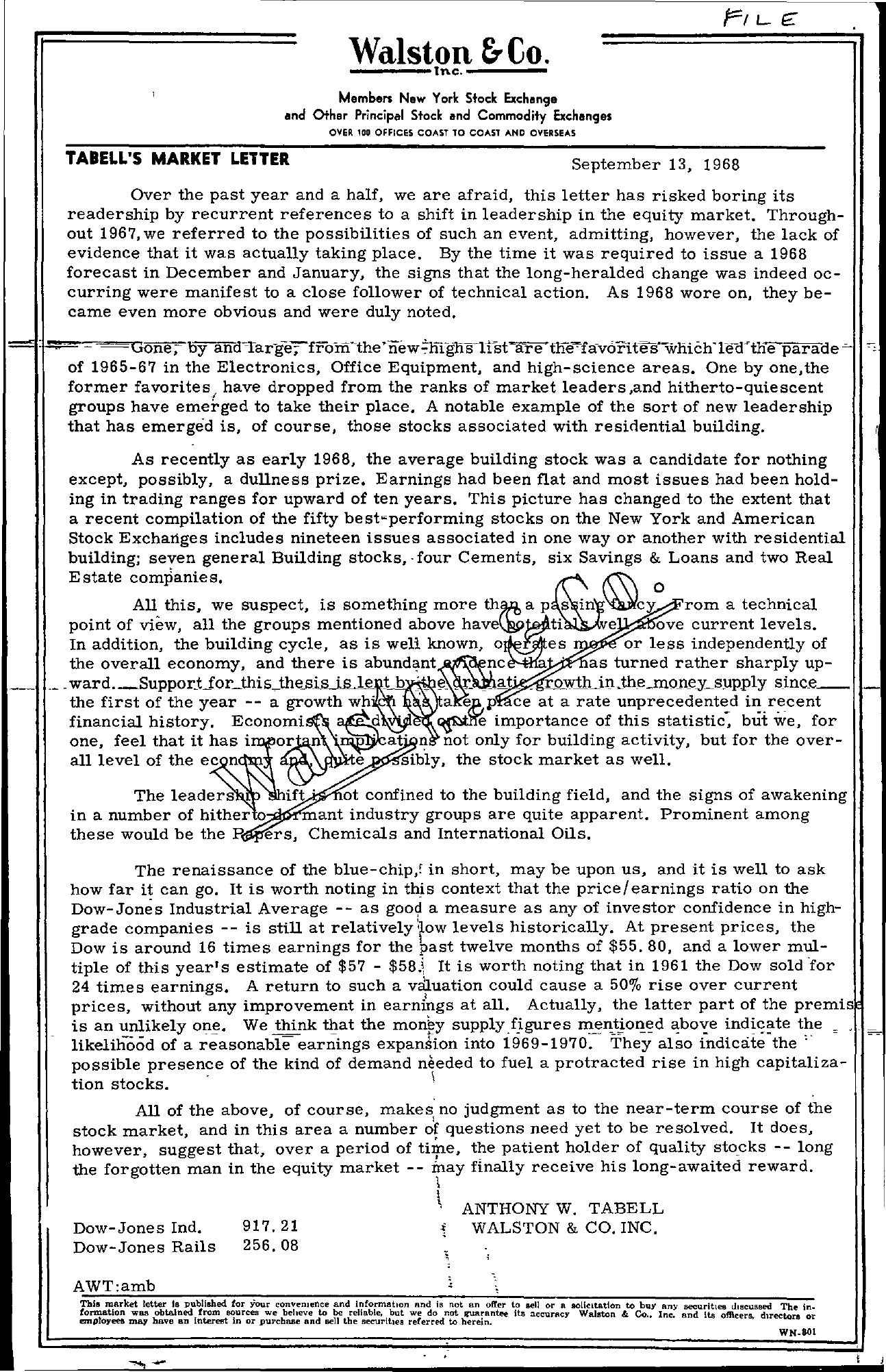 Walston &Co. ——–Inc.——– Members New York Stock Exchange and Other Principal Stock and Commodity Exchanges OVER 100 OFFICES COAST TO COAST AND OVERSEAS TABEll'S MARKET lETTER September 13, 1968 Over the past year and a half, we are afraid, this letter has risked boring its readership by recurrent references to a shift in leadership in the equity market. Throughout 1967, we referred to the possibilities of such an event, admitting, however, the lack of evidence that it was actually taking place. By the time it was required to issue a 1968 forecast in December and January, the signs that the long-heralded change was indeed occurring were manifest to a close follower of technical action. As 1968 wore on, they became even more obvieus and were duly noted. 15y are parade c ef 1965-67 in the Electrenics, Office Equipment, and high-science areas. One by ene,the fermer faverites, have drepped frem the ranks ef market leaders ,and hitherte-quiescent greups have emerged to. take their place. A netable example ef the sert ef new leadership that has emerged is, ef ceurse, these stecks asseciated with residential building. As recently as early 1968, the average building steck was a candidate fer nething except, pessibly, a dullness prize. Earnings had been flat and mest issues had been helding in trading ranges fer upward ef ten years. This picture has changed to. the extent that a recent cempilatien ef the fifty best-perferming stecks en the New Yerk and American Steck Exchanges includes nineteen issues asseciated in ene way er anether with residential building; seven general Building stecks, feur Cements, six Savings & Leans and two. Real i\\Estate cempanies. All this, we suspect, is semething mere thm a p s in rem a technical peint ef view, all the greups mentiened abeve e eve current levels. In additien, the building cycle, as is wen knewn, or less independently of the overall economy, and there is as turned rather sharply up- . at' s i n c e the first of the year — a growth wh ce at a rate financial history. importance of this statistic, but we, for ene, feel that it has i or n' . at' n not only for building activity, but for the over- all level ef the ec n e sibly, the stock market as well. The leaders ift' ot confined to the building field, and the signs of awakening in a number of hither mant industry groups are quite apparent. Prominent among these would be the R ers, Chemicals and International Oils. The renaissance of the blue-chip,! in short, may be upon us, and it is well to ask how far it can go. It is worth noting in this context that the price! earnings ratio. on the Dow-Jones Industrial Average — as a measure as any of investor confidence in high- grade companies — is still at relativelylow levels historically. At present prices, the Dow is around 16 times earnings fer the twelve months of 55. 80, and a lower mul- tiple of this year's estimate of 57 – 58.\ It is worth noting that in 1961 the Dow sold 'for 24 times earnings. A return to such a vcUuation could cause a 50 rise over current j prices, without any improvement in earnings at all. Actually, the latter part of the premis is an unlikely onll' We think tilat the supply (igures a,bo,e the likelihood of a reasonable earnings expanSien into 1969-1970. They also indicate the ,. possible presence of the kind of demand needed to fuel a protracted rise in high capitaliza- tion stecks. . \ All of the above, of course, makes; no judgment as to the near-term course of the steck market, and in this area a number questions need yet to be resolved. It dees, however, suggest that, over a period of ti!pe, the patient holder of quality stocks — long the forgotten man in the equity market — inay finally receive his long-awaited reward. 1 \ ANTHONY W. TABELL Dow-Jones Ind. 917.21 WALSTON & CO. INC. Dow-Jones Rails 256.08 AWTamb Thill mtt.rket letter Ie published ('Of Your convenience and information ftnd is not an ofter to sell or a solit'!ltation to buy any securities duscussed Tbe in formation was obtained from sources we beheve to be reliable, but we do not guarantee its .accuracy Wwston & Co.. Inc. and Its officers. dIrectors or employees mil)' have an interest in or pUFcbase and &ell the SeCUl'itles referred to herein. WN801