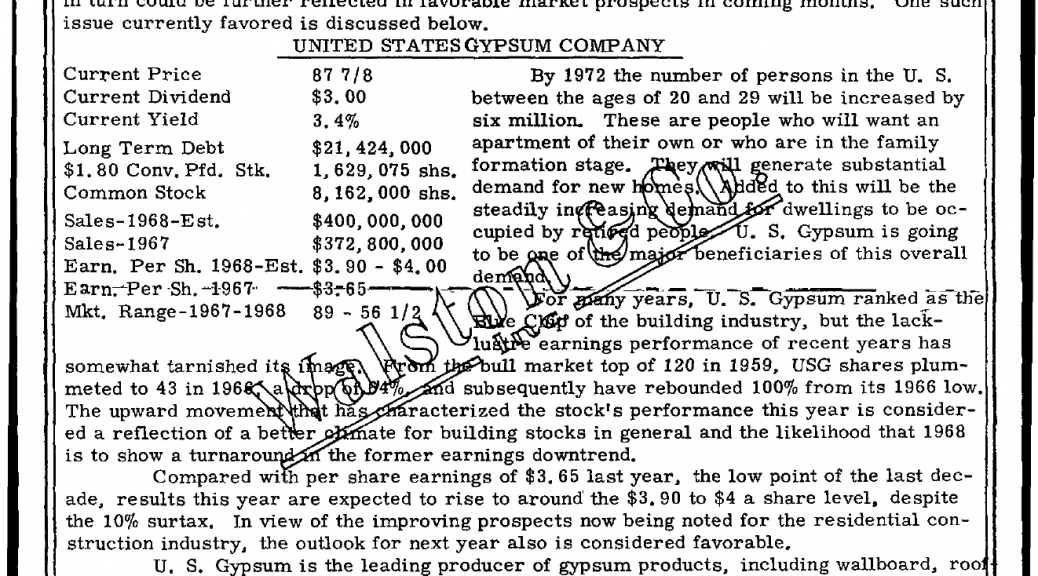 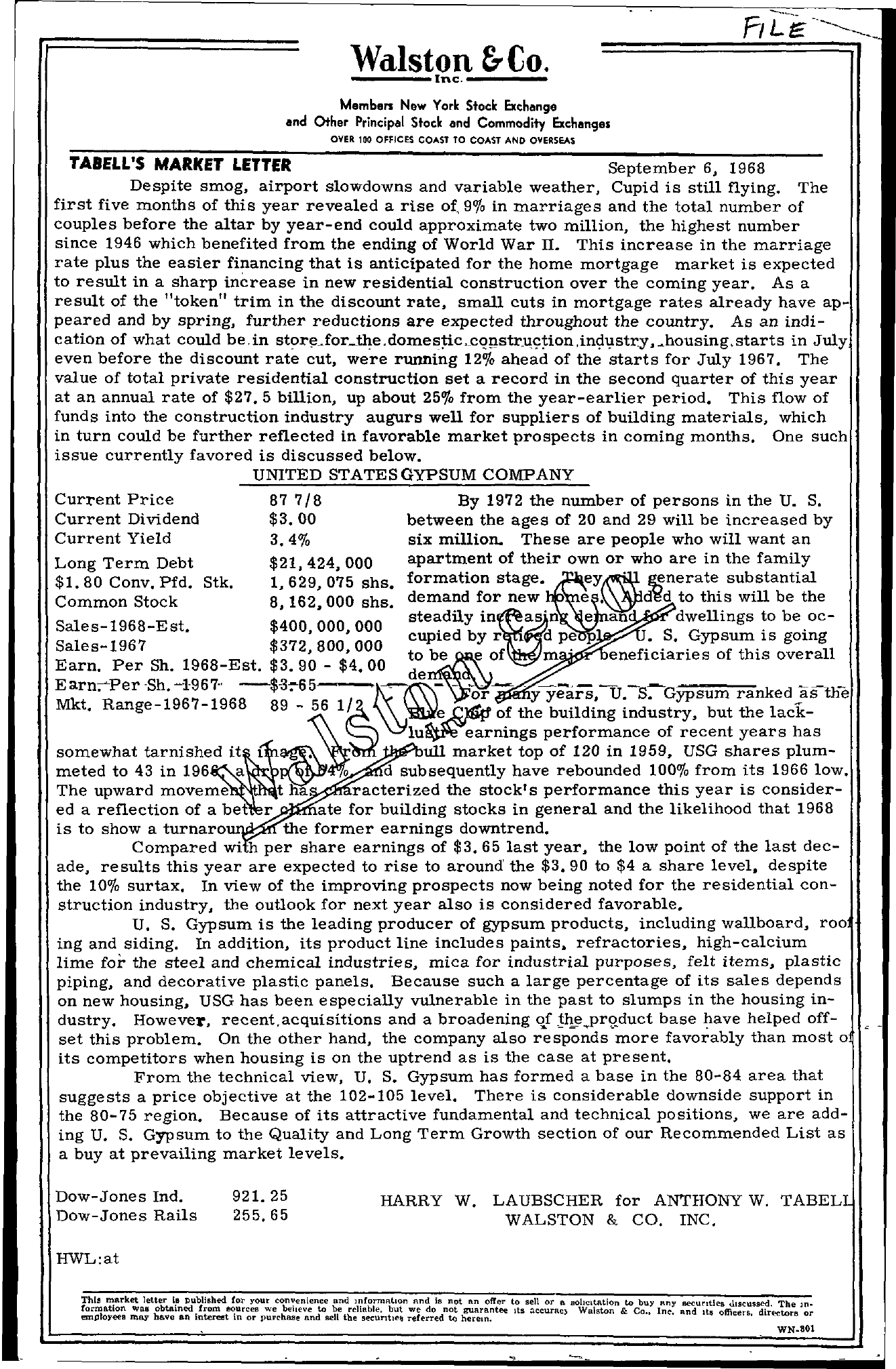 W—d-lsItnocn.&–C-o-. Membe.. New York Stock Exchange and Other Principal Stock and Commodity Exchange. OYER 100 OFFICES COAST TO COAST AND OVERSEAS TABELL'S MARKET LETTER September 6, 1968 Despite smog, airport slowdowns and variable weather, Cupid is still flying. The first five months of this year revealed a rise of,9 in marriages and the total number of couples before the altar by year-end could approximate two million, the highest number since 1946 which benefited from the ending of World War n. This increase in the marriage rate plus the easier financing that is antiCipated for the home mortgage market is expected to result in a sharp increase in new residential construction over the coming year. As a result of the token trim in the discount rate, small cuts in mortgage rates already have ap- peared and by spring, further reductions are expected throughout the country. As an indi- cation of what could be.in starts in July even before the discount rate cut, were running 12 ahead of the starts for July 1967. The value of total private residential construction set a record in the second quarter of this year at an annual rate of 27.5 billion, up about 25 from the year-earlier period. This flow of funds into the construction industry augurs well for suppliers of building materials, which in turn could be further reflected in favorable market prospects in corning months. One such issue currently favored is discussed below. UNITED STATES GYPSUM COMPANY Current Price Current Dividend Current Yield Long Term Debt 87 7/8 3.00 3.4 21,424,000 By 1972 the number of persons in the U. S. between the ages of 20 and 29 will be increased by six million. These are people who will want an apartment of their own or who are in the family 1. 80 Conv. Pfd. Stk. Common Stock Sales-1968-Est. 1,629,075 shs. formation 8,162,000 shs. demand for new 400,000, 000 i n as ' n Sales-1967 372 800 000 cupied by r il Earn. Per Sh. 1968-Est. 3.90 4. 00 e of m substantial e. d'!!'d to this will be the e a dwellings !o be .oc .S..Gypsum.is gomg enefiCiarteS of thlS overall ., –3-. 65- Mkt. Range-1967-1968 89 – 56 or y years, U. Gypsum ranked -a-s1t.I.l-e of the building industry, but the lack- performance of recent years has somewhat tarnished it 1 ull market top of 120 in 1959, USG shares plum- meted to 43 in 196 0 il subsequently have rebounded 1000/0 from its 1966 low. the stock's performance this year is consider- ate for building stocks in general and the likelihood that 1968 is to show a turnaro the former earnings downtrend. Compared wi h per share earnings of 3.65 last year, the low point of the last dec- ade, results this year are expected to rise to around' the 3.90 to 4 a share level, despite the 10 surtax. In view of the improving prospects now being noted for the residential con- struction industry, the outlook for next year also is considered favorable. U. S. Gypsum is the leading producer of gypsum products, including wallboard, roo ing and siding. In addition, its product line includes paints, refractories, high-calcium lime for the steel and chemical industries, mica for industrial purposes, felt items, plastic piping, and decorative plastic panels. Because such a large percentage of its sales depends on new housing, USG has been especially vulnerable in the past to slumps in the housing in- dustry. However, recent.acquisitions and a broadening oJ base have helped off- set this problem. On the other hand, the company also responds more favorably than most 0 its competitors when housing is on the uptrend as is the case at present. From the technical view, U. S. Gypsum has formed a base in the 80-84 area that suggests a price objective at the 102-105 level. There is considerable downside support in the 80-75 region. Because of its attractive fundamental and technical pOSitions, we are add- ing U. S. Gypsum to the Quality and Long Term Growth section of our Recommended List as a buy at prevailing market levels. Dow-Jones Ind. Dow-Jones Rails HWLat 921. 25 255.65 HARRY W. LAUBSCHER for ANTHONY W. TABEL WALSTON & CO. INC. ThIs market letter Is published for your convenIence and mfOTTllRtlon nnd is not an offer to sell or a sOhcltatOn to buy fI.y securities ulscussed. The In- formation was obtained from sources we believe to be reliable. but we do not guarantee Its accurac) Walston & Co.. Inc. and 115 officers, dlrt!Ctors or emDtoyeeB mil) have an Interest In or pUFchase and Bell the referred l(I herein. WN801