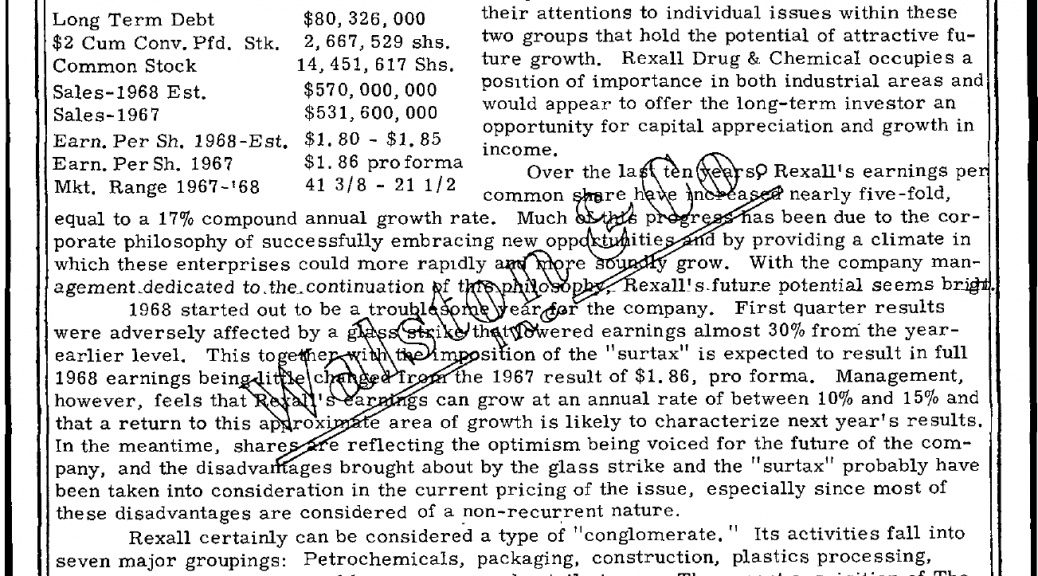 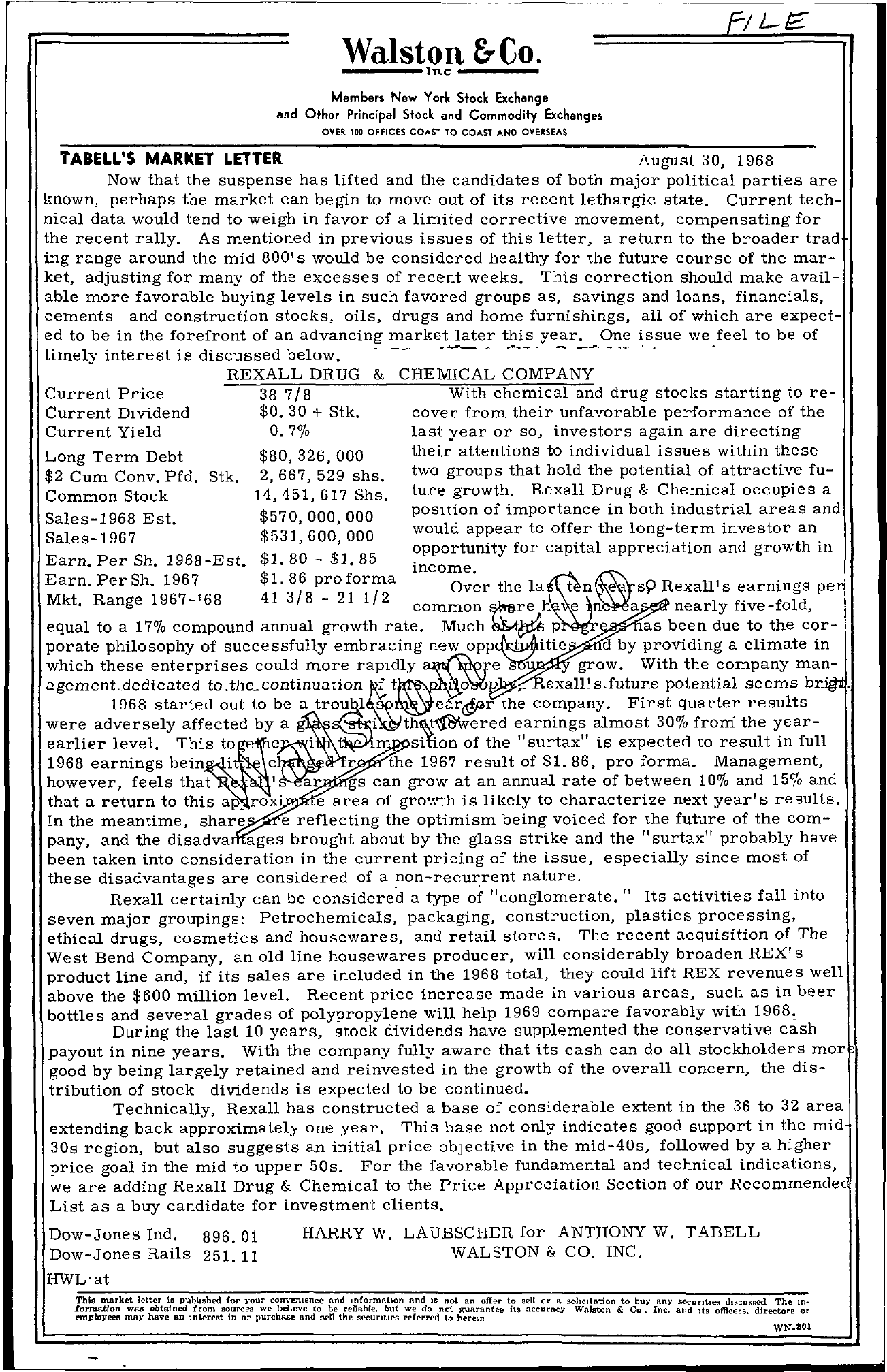 Walston &Co. Inc Members New York Stock Exchange and Other Principal Stock and Commodity Exchange. OVER 100 OFFICES COAST TO COAST AND OVERSEAS TABELL'S MARKET LETTER August 30, 1968 Now that the suspense has lifted and the candidates of both major political parties are known, perhaps the market can begin to move out of its recent lethargic state. Current tech- nical data would tend to weigh in favor of a limited corrective movement, compensating for the recent rally. As mentioned in previous issues of this letter, a return to the broader trad ing range around the mid 800' s would be considered healthy for the future course of the market, adjusting for many of the excesses of recent weeks. This correction should make available more favorable buying levels in such favored groups as, savings and loans, financials, cements and construction stocks, oils, drugs and home furnishings, all of which are expected to be in the forefront of an advancing market later this year. One issue we feel to be of C –' – – — .timely interest is discussed below. – REXALL DRUG & CHEMICAL COMPANY Current Price 38 7/8 With chemical and drug stocks starting to re- Current DIvidend 0. 30 Stk. cover from their unfavorable performance of the Current Yield 0.7 last year or so, investors again are directing Long Term Debt 80,326,000 their attentions to individual issues within these 2 Cum Conv. Pfd. Stk. 2,667, 529 shs. two groups that hold the potential of attractive fu- Common Stock 14,451,617 Shs. ture growth. Rexall Drug & Chemical occupies a Sales-1968 Est. Sales-1967 570,000,000 531,600,000 posItion of importance in both industrial areas and would appear to offer the long-term investor an opportunity for capital appreciation and growth in Earn. Per Sh. 1968-Est. 1.80-1.85.Income. Earn. Per Sh. 1967 Mkt. Range 1967-'68 411. 38/68pro2f1or1m/2a Over the la t n e s9 Rexall's . pe common e n a nearly flve-fold, equal to a 17 compound annual growth rate. Much pr as been due to the cor- porate philosophy of successfully embracing new opphMitie by providing a climate in which these enterprises could more agement.dedicated 1968 started out to be a e grow. With the company man- 10 , exall's.future potential seems br. ear!f,ar the company. First quarter results were adversely affected by a earlier level. This to e 1968 earnings bein i c i earnings almost 30 froni the yearsinon of the surtax is expected to result in full r the 1967 result of 1. 86, pro forma. Management, however, feels that ' a r gs can grow at an annual rate of between 10 and 15 and that a return to this ap rox e area of growth is likely to characterize next year's results. In the meantime, share e reflecting the optimism being voiced for the future of the company, and the disadva ages brought about by the glass strike and the surtax probably have been taken into consideration in the current pricing of the issue, especially since most of these disadvantages are considered of a nature. Rexall certainly can be considered a type of conglomerate. Its activities fall into seven major groupings Petrochemicals, packaging, construction, plastics processing, ethical drugs, cosmetics and housewares, and retail stores. The recent acquisition of The West Bend Company, an old line housewares producer, will considerably broaden REX's product line and, if its sales are included in the 1968 total, they could lift REX revenues well above the 600 million level. Recent price increase made in various areas, such as in beer bottles and several grades of polypropylene will help 1969 compare favorably with 1968 During the last 10 years, stock dividends have supplemented the conservative cash payout in nine years. With the company fully aware that its cash can do all stockholders mor good by being largely retained and reinvested in the growth of the overall concern, the dis- tribution of stock dividends is expected to be continued. Technically, Rexall has constructed a base of considerable extent in the 36 to 32 area extending back approximately one year. This base not only indicates good support in the mid 30s region, but also suggests an initial price objective in the mid-40s, followed by a higher price goal in the mid to upper 50s. For the favorable fundamental and technical indications, we are adding Rexall Drug & Chemical to the Price Appreciation Section of our Recommende List as a buy candidate for investment clients. Dow-Jones Ind. 896.01 Dow-Jones Rails 251. 11 HARRY W. LAUBSCHER for ANTHONY W. TABELL WALSTON & CO. INC. HWL'at This market letter ill pl.lbhshed for your convenumee and l'lformRtlon nnd IS not an offer to sell or !\ soliCitation to buy an' M!('untlel'l Ihscussoo The tn. format/on was obtained from sources we helleve to be but we do not guarantee its Wnlston & Co. Inc. and Its officers directors or emDloyeel'l may have an mtereBt In or pUFchase I\nd set! the secuntLes referred to herem WNBOl