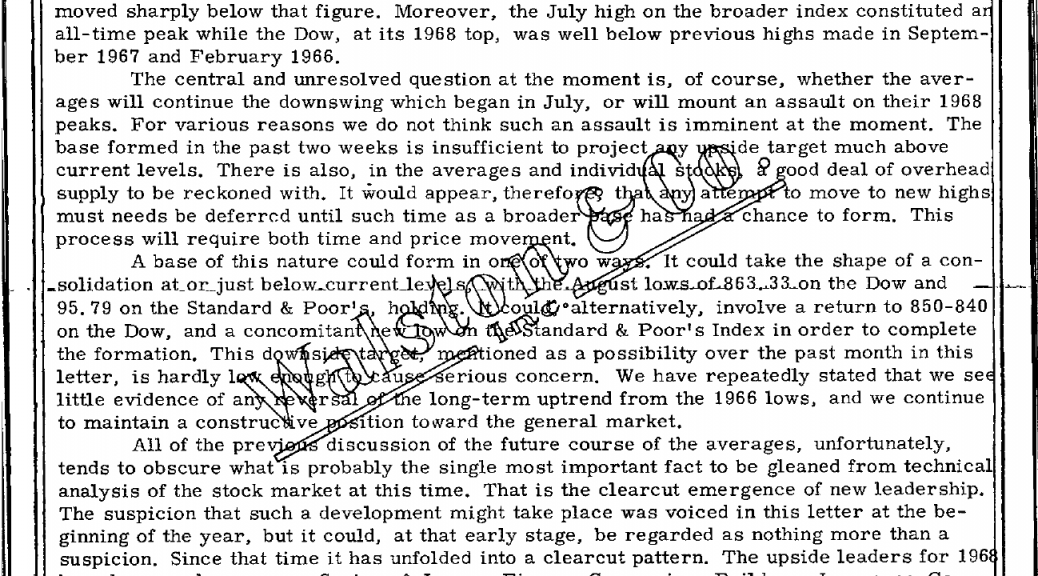 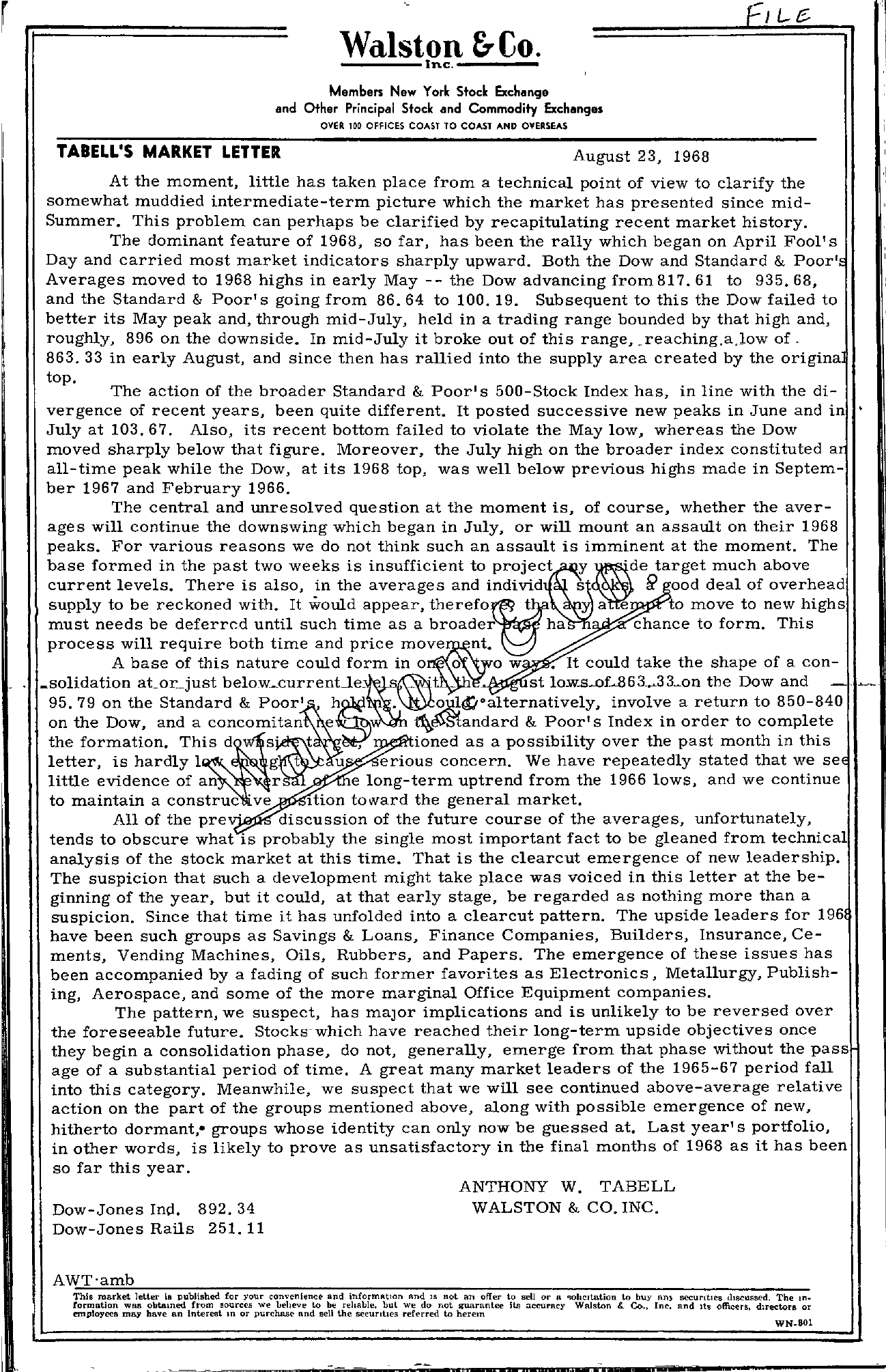 r Walston &Co, —,;;….; Inc. —.;;… Members New York Stock Exchange and Other Principal Stock and Commodity Exchanges OVER 100 OFFICES COAST TO COAST AND OVERSEAS lABEll'S MARKET lETTER August 23, 1968 At the moment, little has taken place from a technical point of view to clarify the somewhat muddied intermediate-term picture which the market has presented since mid- Summer. This problem can perhaps be clarified by recapitulating recent market history. The dominant feature of 1968, so far, has been the rally which began on April Fool's Day and carried most market indicators sharply upward. Both the Dow and Standard & Poor' Averages moved to 1968 highs in early May — the Dow advanCing from817. 61 to 935.68, and the Standard & Poor's going from 86.64 to 100.19. Subsequent to this the Dow failed to bettEr its May peak and, through mid-July, held in a trading range bounded by that high and, roughly, 896 on the downside. In mid-July it broke out of this range, Jeaching.a.low of 863.33 in early August, and since then has rallied into the supply area created by the origina top. The action of the broader Standard & Poor's 500-Stock Index has, in line with the di- vergence of recent years, been quite different. It posted successive new peaks in June and in July at 103.67. Also, its recent bottom failed to violate the May low, whereas the Dow moved sharply below that figure. Moreover, the July high on the broader index constituted a all-time peak while the Dow, at its 1968 top, was well below previous highs made in Septem- ber 1967 and February 1966. The central and unresolved question at the moment is, of course, whether the aver- ages will continue the downswing which began in July, or will mount an assault on their 1968 peaks. For various reasons we do not think such an assault is imminent at the moment. The base formed in the past two weeks is insufficient to current levels. There is also, in the averages and individ s target much above f( ood deal of overhead supply to be reckoned with. It would appear, a e to move to new highs must needs be deferred until such time as a broader ha chance to form. This process will require both time and price A base of this nature could form in 0 0 0 w It could take the shape of a con- solidation aLor.just st low.s…of….863.L33on the Dow and – . 95.79 on the Standard & involve a return to 850-840 on the Dow, and a concomitan e & Poor's Index in order to complete the formation. s d si!t , ioned as a possibility over the past month in this letter, is hardly I g t u erious concern. We have repeatedly stated that we se little evidence of an r e long-term uptrend from the 1966 lows, and we continue to maintain a construc 've ltion toward the general market. All of the pre' discussion of the future course of the averages, unfortunately, tends to obscure what is probably the single most important fact to be gleaned from technical analysis of the stock market at this time. That is the clearcut emergence of new leadership. The suspicion that such a development might take place was voiced in this letter at the be- ginning of the year, but it could, at that early stage, be regarded as nothing more than a suspicion. Since that time it has unfolded into a clearcut pattern. The upside leaders for 196 have been such groups as Savings & Loans, Finance Companies, Builders, Insurance, Ce- ments, Vending Machines, Oils, Rubbers, and Papers. The emergence of these issues has been accompanied by a fading of such former favorites as Electronics, Metallurgy, Publish- ing, Aerospace, and some of the more marginal Office Equipment companies. The pattern, we suspect, has maJor implications and is unlikely to be reversed over the foreseeable future. Stocks which have reached their long-term upside objectives once they begin a consolidation phase, do not, generally, emerge from that phase without the pass age of a substantial period of time. A great many market leaders of the 1965-67 period fall into this category. Meanwhile, we suspect that we will see continued above-average relative action on the part of the groups mentioned above, along with possible emergence of new, hitherto dormant,. groups whose identity can only now be guessed at. Last year's portfolio, in other words, is likely to prove as unsatisfactory in the final months of 1968 as it has been so far this year. ANTHONY W. TABELL Dow-Jones Ind. 892.34 WALSTON & CO. INC. Dow-Jones Rails 251. 11 AWT-amb This market letter Is published for your convenience and informat(1n And IS not an offer to sell or a '1ohcltation to buy an securItIes ulSCussed. The In formation WIlS obtamed from sources We helleve to be rehable. but we do not guarantee Its accuracy Wruston &. Co., Inc. and Its officers. dIrectors or employeca may have an Intereat In or purchase and sell the securities referred to herem WN801 ,- iii ;;u