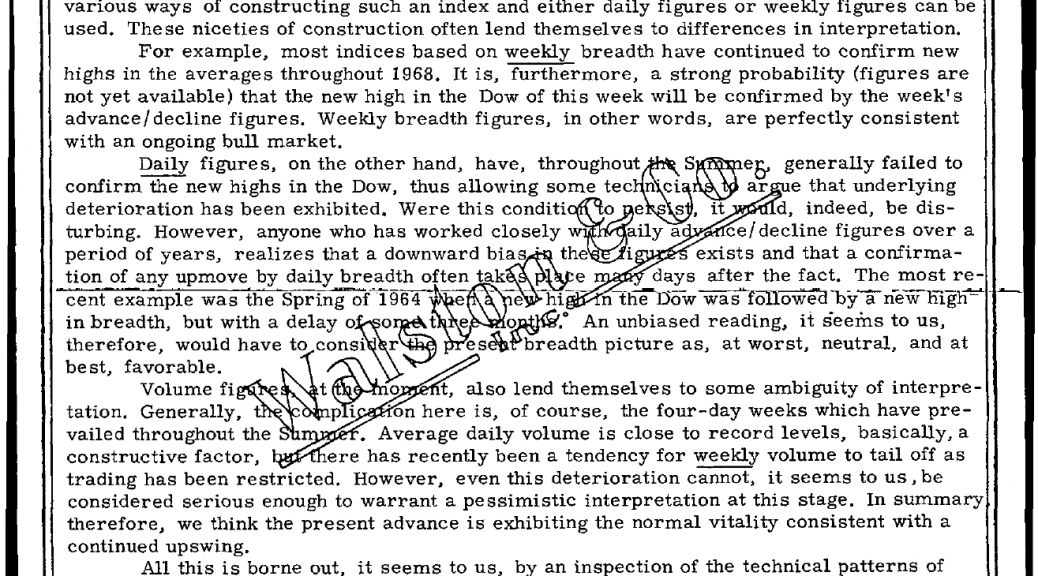 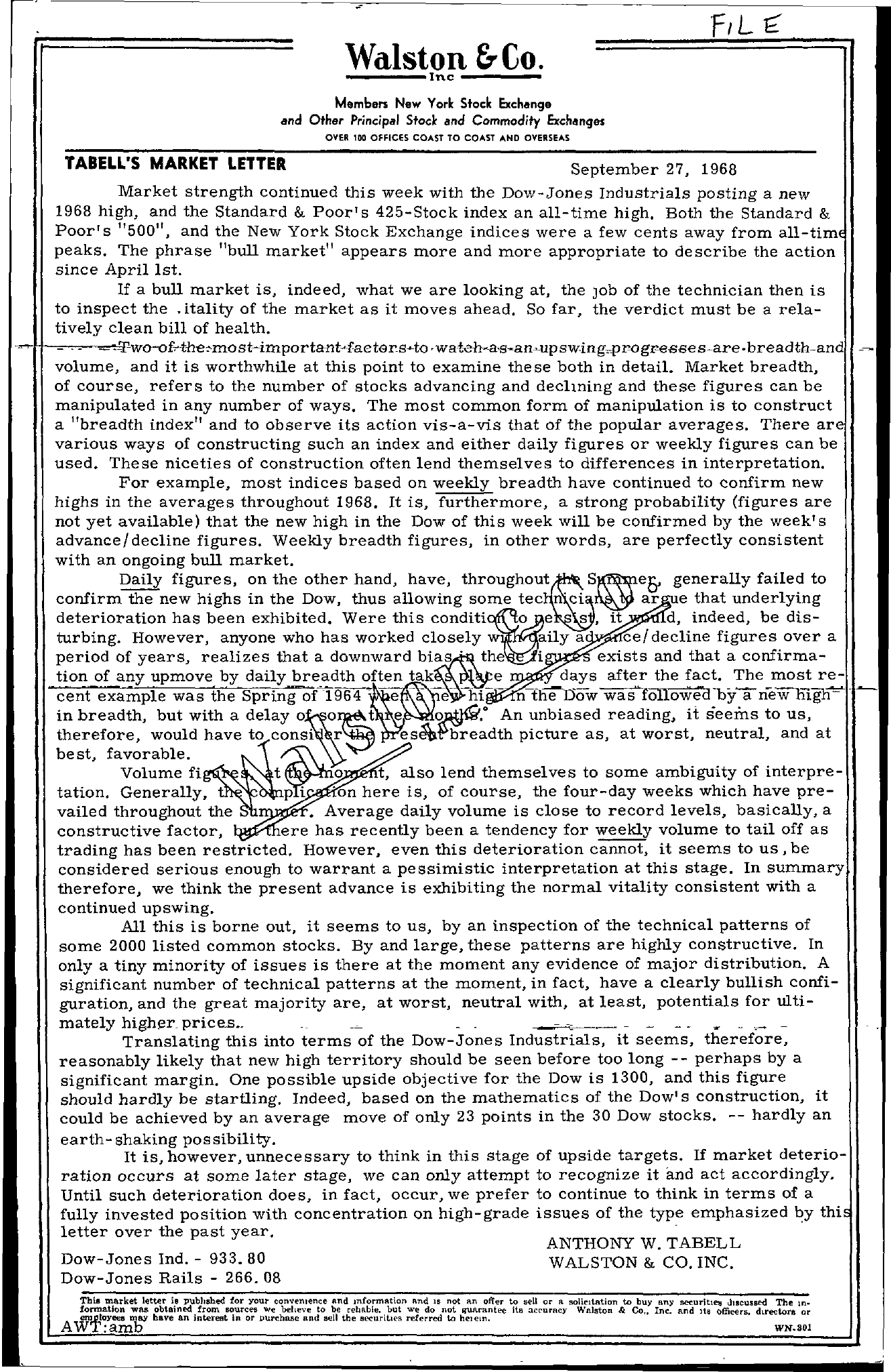 '–' ———————————–..c———————————————————– Walston &Co. Inc Members New York Stock Exchange and Other Principal Stock and Commodity Exchanges OVER 100 OfFices COAST TO COAST AND OVERSEAS TABEll'S MARKET lETTER September 27, 1968 Market strength continued this week with the Dow-Jones Industrials posting a new 1968 high, and the Standard & Poor's 425-Stock index an all-time high. Both the Standard & Poor's 500, and the New York Stock Exchange indices were a few cents away from all-timE peaks. The phrase bull market appears more and more appropriate to describe the action since April 1st. If a bull market is, indeed, what we are looking at, the Job of the technician then is to inspect the .itality of the market as it moves ahead. So far, the verdict must be a rela- tively clean bill of health. ,- — volume, and it is worthwhile at this point to examine these both in detail. Market breadth, of course, refers to the number of stocks advancing and declming and these figures can be manipulated in any number of ways. The most common form of manipulation is to construct a breadth index and to observe its action vis-a-vis that of the popular averages. There are various ways of constructing such an index and either daily figures or weekly figures can be used. These niceties of construction often lend themselves to differences in interpretation. For example, most indices based on weekly breadth have continued to confirm new highs in the averages throughout 1968. It is, furthermore, a strong probability (figures are not yet available) that the new high in the Dow of this week will be confirmed by the week's advance/ decline figures. Weekly breadth figures, in other words, are perfectly consistent with an ongoing bull market. Daily figures, on the other hand, have, generally failed to confirm the new highs in the Dow, thus allowing some tec n' ci arjlle that underlying deterioration has been exhibited. Were this s, indeed, be dis- turbing. However, anyone who has worked closely w aily decline figures over a period of years, realizes that a downward the exists and that a confirma- tion of any upmove by daiy breadth often the fact. The cent example was the Sprmg of 1964 hl.WYlll the Dow was fOlloweooy a newnlgn- in breadth, but with a delay e An unbiased reading, it seems to us, therefore, would have to consi r picture as, at worst, neutral, and at best, favorable. Volume fi tation. Generally, t nt 0 t, also lend themselves to some ambiguity of interprep i here is, of course, the four-day weeks which have pre- vailed throughout the Average daily volume is close to record levels, basically, a constructive factor, has recently been a tendency for weekly volume to tail off as trading has been restricted. However, even this deterioration cannot, it seems to us, be considered serious enough to warrant a pessimistic interpretation at this stage. In summary therefore, we think the present advance is exhibiting the normal vitality consistent with a continued upswing. All this is borne out, it seems to us, by an inspection of the technical patterns of some 2000 listed common stocks. By and large, these patterns are highly constructive. In only a tiny minority of issues is there at the moment any evidence of major distribution. A significant number of technical patterns at the moment, in fact, have a clearly bullish confi- guration, and the great majority are, at worst, neutral with, at least, potentials for ulti- mately higher priceB. c – – Translating this into terms of the Dow-Jones Industrials, it seems, therefore, reasonably likely that new high territory should be seen before too long — perhaps by a significant margin. One possible upside objective for the Dow is 1300, and this figure should hardly be startling. Indeed, based on the mathematics of the Dow's construction, it could be achieved by an average move of only 23 points in the 30 Dow stocks. — hardly an earth- shaking possibility. It is, however, unnecessary to think in this stage of upside targets. If market deterio- ration occurs at some later stage, we can only attempt to recognize it and act accordingly. Until such deterioration does, in fact, occur, we prefer to continue to think in terms of a fully invested position with concentration on high-grade issues of the type emphasized by thi, letter over the past year. Dow-Jones Ind. – 933.80 Dow-Jones Rails – 266,08 ANTHONY W. TABELL WALSTON & CO. INC. This DUl.rket letter i.e published for your convenience and mformation and IS not an oller to sell or 1\ soliCItation to buy any securitIes Jllicussed The in- formation WA.8 obtamed. from sources We believe to be rehable,. but we do not IUfLrantee Its accuracy Walston & Co,. Inc. and lte officers. dlrector or em.4'.!oyees may bave an mtereet in or purchase and sell the 8ec!Untles referred to helem, AWTamb WN'.'