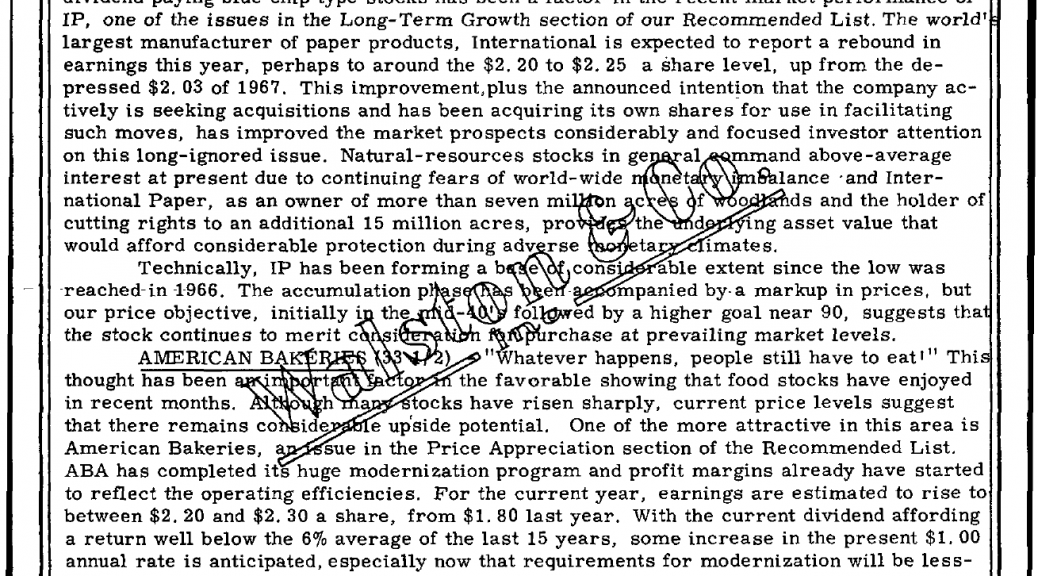 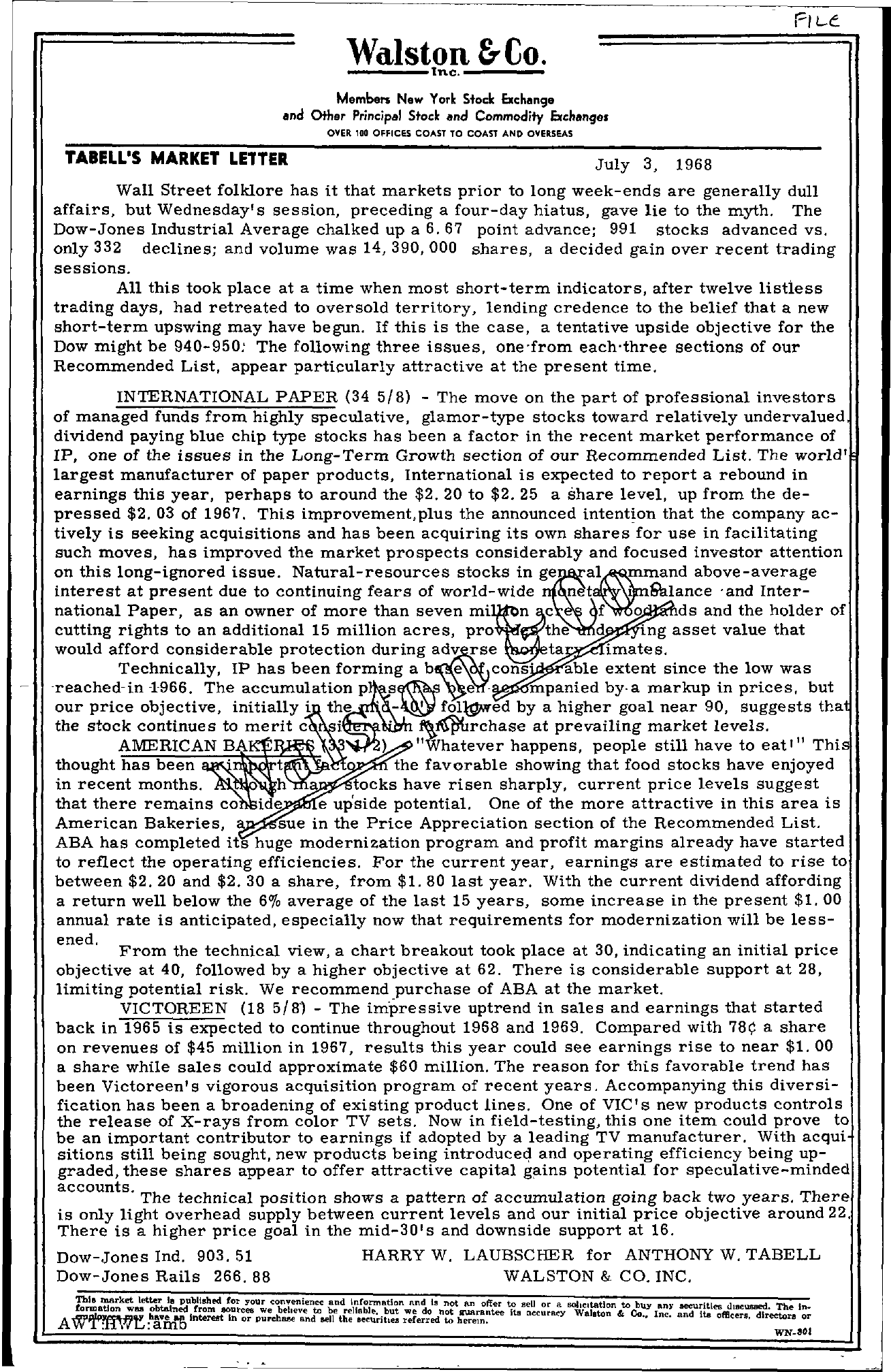 W—a-lIsntocn.-&-C–o-. Members New York Stock Exchange and Other Principal Stock and Commodity Exchanges OVER 100 OFFICES COAST TO COAST AND OVERSEAS TABELL'S MARKET LETTER July 3, 1968 Wall Street folklore has it that markets prior to long week-ends are generally dull affairs, but Wednesday's session, preceding a four-day hiatus, gave lie to the myth. The Dow-Jones Industrial Average chalked up a 6. 67 point advance; 991 stocks advanced vs. only 332 declines; and volume was 14,390,000 shares, a decided gain over recent trading sessions. All this took place at a time when most shortterm indicators, after twelve listiess trading days, had retreated to oversold territory, lending credence to the belief that a new short-term upswing may have begun. If this is the case, a tentative upside objective for the Dow might be 940-950 The following three issues, one'from each,three sections of our Recommended List, appear particularly attractive at the present time. INTERNATIONAL PAPER (34 5/8) – The move on the part of professional investors of managed funds from highly speculative, glamor-type stocks toward relatively undervalued dividend paying blue chip type stocks has been a factor in the recent market performance of IP, one of the issues in the Long-Term Growth section of our Recommended List. The world' largest manufacturer of paper products, International is expected to report a rebound in earnings this year, perhaps to around the 2.20 to 2.25 a share level, up from the de- pressed 2. 03 of 1967. This improvement,plus the announced intention that the company ac- tively is seeking acquisitions and has been acquiring its own shares for use in facilitating such moves, has improved the market prospects considerably and focused investor attention on this long-ignored issue. Natural-resources stocks in interest at present due to continuing fears of world-wide n t above-average alance 'and Inter- national Paper, as an owner of more than seven f 0 ds and the holder of cutting rights to an additional 15 million acres, pro ding asset value that would afford considerable protection during rse ta imates. Technically, IP has been forming abe cons' able extent since the low was reached-in -1966. The e – mpanied by-a markup in prices. but our price objective, the by a higher goal near 90, suggests tha the stock continues to merit c i . at prevailing market levels. AMERICAN BA ) Whatever happens, people still have to eat' This thought has been . t the favorable showing that food stocks have enjoyed in recent months. h a tocks have risen sharply, current price levels suggest e e upside potential. One of the more attractive in this area is American Bakeries, a sue in the Price Appreciation section of the Recommended List, ABA has completed its huge modernization program and profit margins already have started to reflect the operating efficiencies. For the current year, earnings are estimated to rise to between 2. 20 and 2.30 a share, from 1. 80 last year. With the current dividend affording a return well below the 6/0 average of the last 15 years, some increase in the present 1. 00 annual rate is antiCipated, especially now that requirements for modernization will be less- ened, From the technical view, a chart breakout took place at 30, indicating an initial price objective at 40, followed by a higher objective at 62. There is considerable support at 28, limiting potential risk. We recommend purchase of ABA at the market. VICTOREEN (18 5/8) – The impressive uptrend in sales and earnings that started back in 1965 is expected to continue throughout 1968 and 1969. Compared with 78 a share on revenues of 45 million in 1967, results this year could see earnings rise to near 1. 00 a share while sales could approximate 60 million. The reason for this favorable trend has been Victoreen's vigorous acquisition program of recent years. Accompanying this diversi- fication has been a broadening of existing product lines. One of VIC's new products controls the release of X-rays from color TV sets, Now in field-testing, this one item could prove to be an important contributor to earnings if adopted by a leading TV manufacturer. With acqui sitions still being sought, new products being introduced and operating efficiency being upgraded, these shares appear to offer attractive capital gains potential for speculative-minded a c c oTheutecnhnictalspO.S.ition shows a pattern of accumulation go.mg back two years. There is only light overhead supply between current levels and our initial price objective around 22, There is a higher price goal in the mid-30's and downside support at 16. Dow-Jones Ind. 903.51 Dow-Jones Rails 266.88 HARRY W. LAUBSCHER for ANTHONY W. TABELL WALSTON & CO. INC. rle hl8rket letter la published !-or your convenienee and Information and Is not an offer to sell or a soliCItation to buy an), securities J scuued Th I A VV'll1 aVrn-&was .o.btained from aoUlCes we believe to be rellablt'. but we do not guarantee Ita nceuraey Wallton & Co Inc and ita om I dl ……. e n- IntereAt In or purchase and &ell the lIecu.rities referred to herem. '.' cers, r………re or WN3Ct