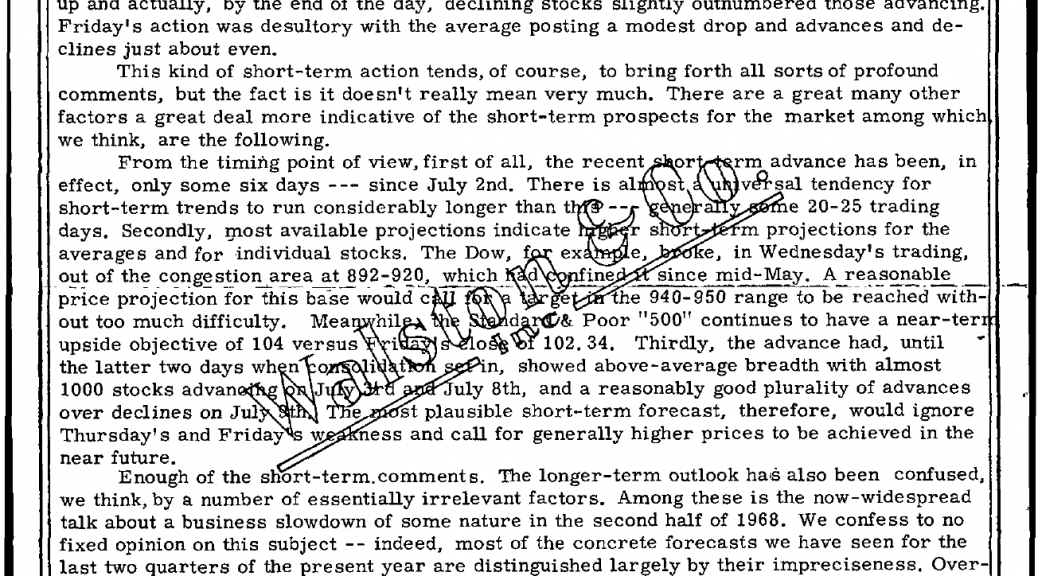 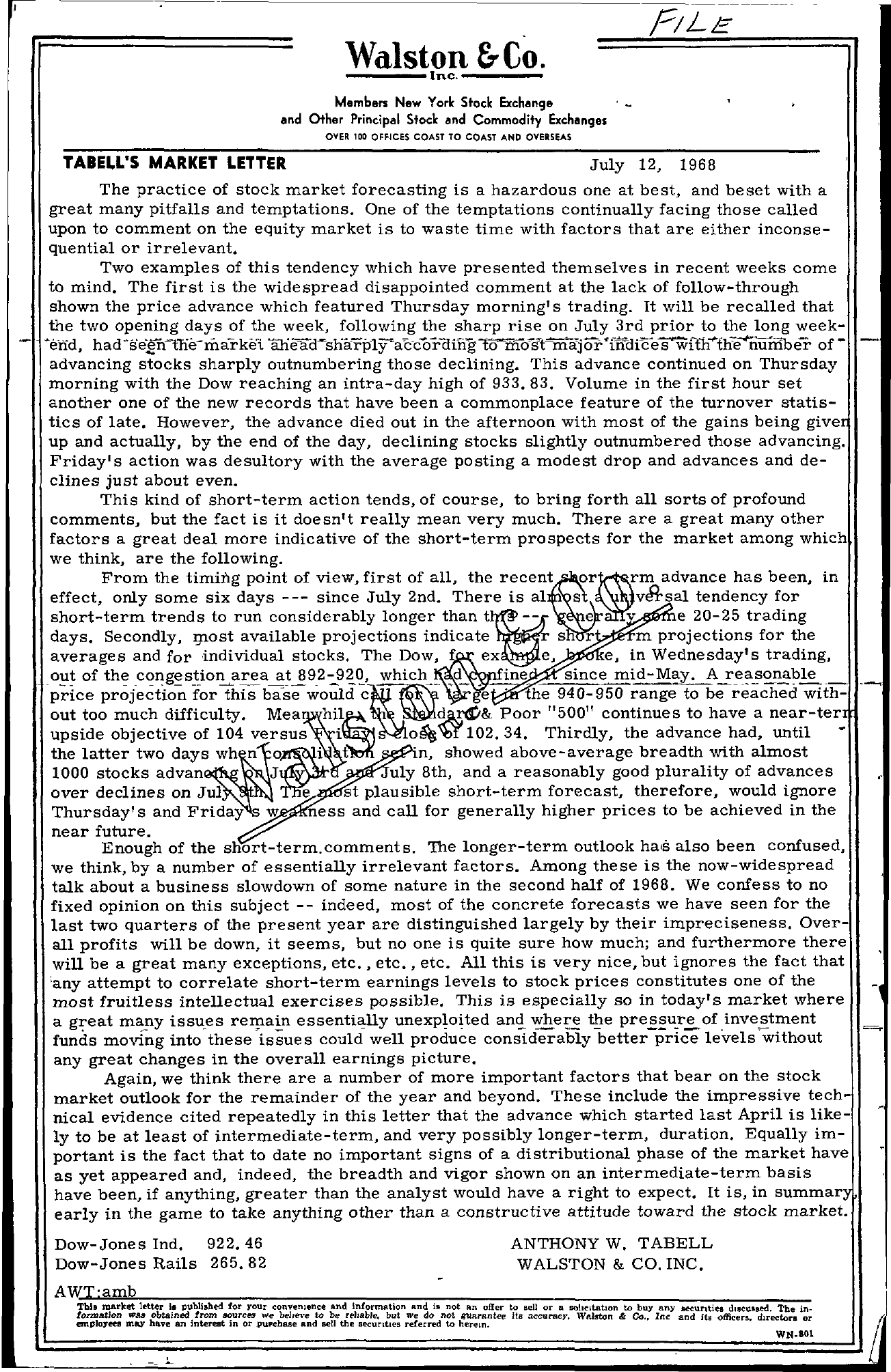 W—a-l-sItnonc.&–C-o-. riLE Members New York Stock Exchange and Other Principal Stock and Commodity Exchange. OYER 100 OFFICES COAST TO COAST AND OVERSEAS TABELL'S MARKET lETTER July 12, 1968 The practice of stock market forecasting is a hazardous one at best, and beset with a great many pitfalls and temptations. One of the temptations continually facing those called upon to comment on the equity market is to waste time with factors that are either inconse- quential or irrelevant. Two examples of this tendency which have presented themselves in recent weeks come to mind. The first is the widespread disappointed comment at the lack of follow-through shown the price advance which featured Thursday morning's trading. It will be recalled that the two opening days of the week, following the sharp rise on July 3rd prior to the long week- – . 'end, had ket ane-ad-snarply 'iIldiceSWifh…..h-e-number of- advancing stocks sharply outnumbering those declining. This advance continued on Thursday morning with the Dow reaching an intra-day high of 933.83. Volume in the first hour set another one of the new records that have been a commonplace feature of the turnover statis- tics of late. However, the advance died out in the afternoon with most of the gains being give up and actually, by the end of the day, declining stocks slightly outnumbered those advancing. Friday's action was desultory with the average posting a modest drop and advances and de- clines just about even. This kind of short-term action tends, of course, to bring forth all sorts of profound comments, but the fact is it doesn't really mean very much. There are a great many other factors a great deal more indicative of the short-term prospects for the market among which we think, are the following. From the timing pOint of view, first of all, the advance has been, in effect, only some six days — since July 2nd. There is al s vJi.sal tendency for short-term trends to run considerably longer than e e 20-25 trading days. Secondly, lJlost available projections indicate sr m projections for the averages and for individual stocks. The DOWrfeixf e, e, in Wednesday's trading, out of the congestion area at 892-920, which d ine since mid-May. A reasonable . price projection for this ba-se – – e . -he 940-950 range to be-reached wiih- out too much difficulty. upside objective of 104 versus i Poor 500 continues to have a near-ter 1' 102.34. Thirdly, the advance had, until – the latter two 1000 stocks advan n J t 'n, showed above-average breadth with almost uly 8th, and a reasonably good plurality of advances over declines on Jul e st plausible short-term forecast, therefore, would ignore Thursday's and Friday w ness and call for generally higher prices to be achieved in the near future. Enough of the snort-term.comments. The longer-term outlook has also been confused, we think, by a number of essentially irrelevant factors. Among these is the now-widespread talk about a business slowdown of some nature in the second half of 1968. We confess to no fixed opinion on this subject — indeed, most of the concrete forecasts we have seen for the last two quarters of the present year are distinguished largely by their impreciseness. Over- all profits will be down, it seems, but no one is quite sure how much; and furthermore there will be a great many exceptions, etc., etc., etc. All this is very nice, but ignores the fact that any attempt to correlate short-term earnings levels to stock prices constitutes one of the most fruitless intellectual exercises possible. This is especially so in today's market where a ma!ly issues essentially unexp!oited ant! t!J.e funds moving into these issues could well produce conSiderably better price levels without any great changes in the overall earnings picture. Again, we think there are a number of more important factors that bear on the stock market outlook for the remainder of the year and beyond. These include the impressive tech- nical evidence cited repeatedly in this letter that the advance which started last April is like- ly to be at least of intermediate-term, and very possibly longer-term, duration. Equally im- portant is the fact that to date no important signs of a distributional phase of the market have as yet appeared and, indeed, the breadth and vigor shown on an intermediate-term basis have been, if anything, greater than the analyst would have a right to expect. It is, in summar early in the game to take anything other than a constructive attitude toward the stock market. Dow-Jones Ind. 922.46 Dow-Jones Rails 265.82 ANTHONY W. T ABELL WALSTON & CO. INC. AWTamb TbIB market letter Is publiahed for your convemence and Information and Is not an olter to sell or a !l()hcltatlon to buy any &eeUrttie8 dl8CUSeed. The in- formation was obtained from we believe to be rehable, Dut we do not guar'Ult e its .lceuracy. Walston & Co., Inc and its officers. directors or I