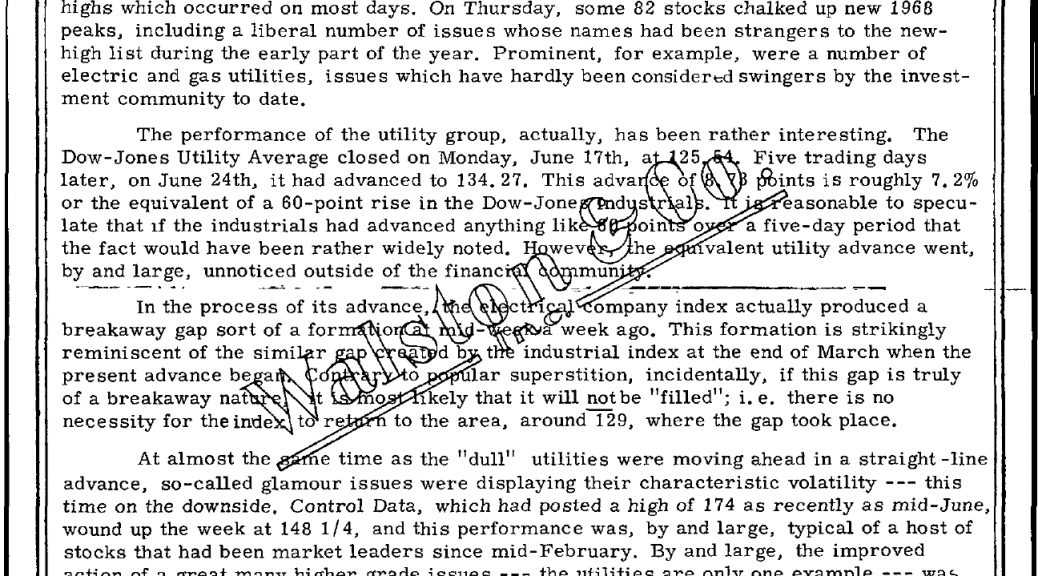 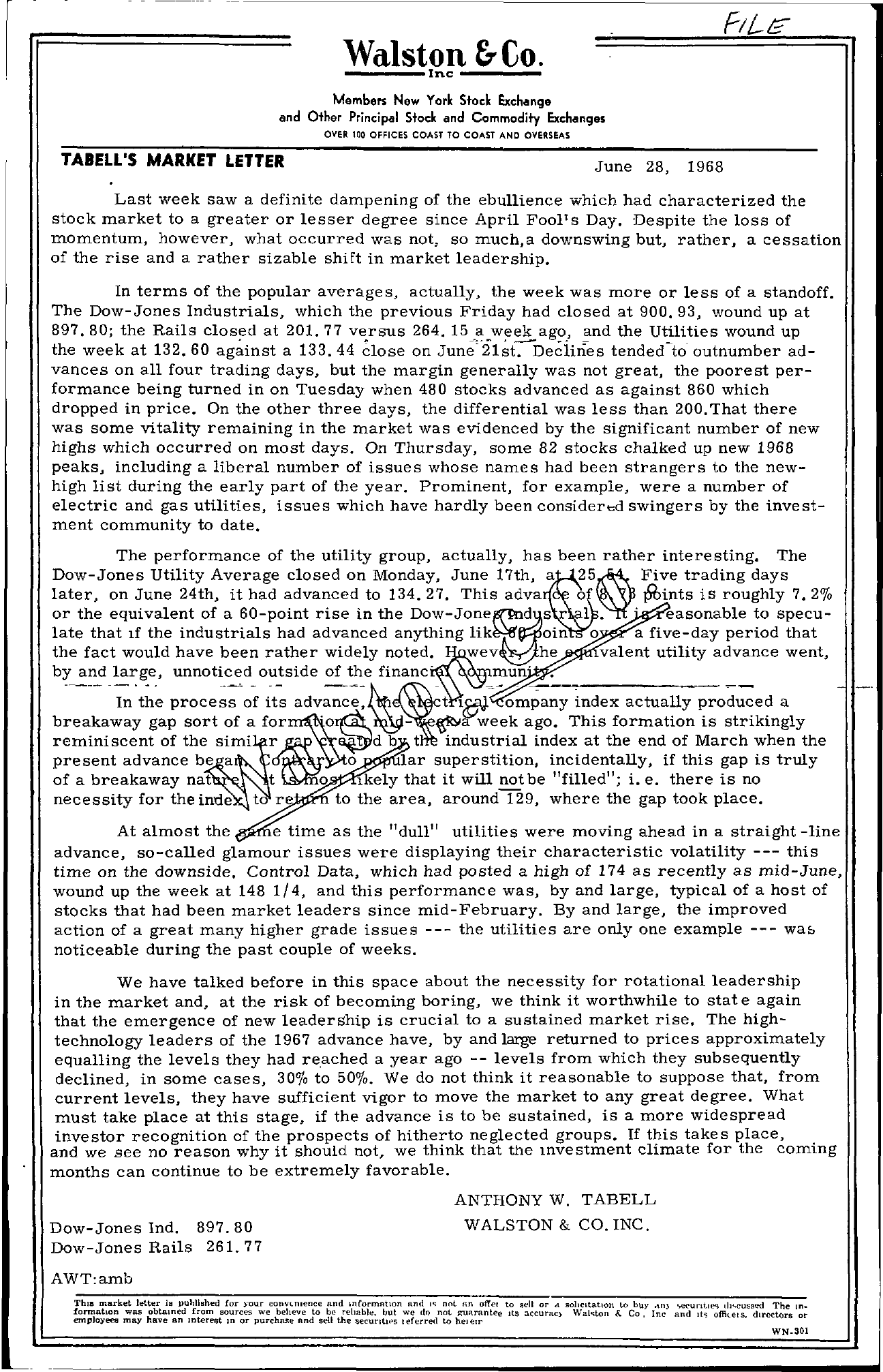 Walston &Co. —–Inc —– Members New York Stock Exchange and Other Principal Stock and Commodity Exchanges OVER 100 OFFICES COAST TO COAST AND OVERSEAS TABELL'S MARKET LETTER June 28, 1968 Last week saw a definite dampening of the ebullience which had characterized the stock market to a greater or lesser degree since April Fool's Day. Despite the loss of momentum, however, what occurred was not, so much,a downswing but, rather, a cessation of the rise and a rather sizable shift in market leadership. In terms of the popular averages, actually, the week was more or less of a standoff. The Dow-Jones Industrials, which the previous Friday had closed at 900.93, wound up at 897.80; the Rails closed at 201. 77 versus 264. 15 a week ago, and the Utilities wound up the week at 132. 60 a 133.44 ;lose on tended-to outnumber ad- vances on all four trading days, but the margin generally was not great, the poorest per- formance being turned in on Tuesday when 480 stocks advanced as against 860 which dropped in price. On the other three days, the differential was less than 200. That there was some vitality remaining in the market was evidenced by the significant number of new highs which occurred on most days. On Thursday, some 82 stocks chalked up new 1968 peaks, including a liberal number of issues whose names had been strangers to the new- high list during the early part of the year. Prominent, for example, were a number of electric and gas utilities, issues which have hardly been considered swingers by the invest- ment community to date. The performance of the utility group, actually, has been rather interesting. The Dow-Jones Utility Average closed on Monday, June 17th, a Five trading days later, on June 24th, it had advanced to 134.27. This adva 0 is roughly 7.2 or the equivalent of a 60-point rise in the r al. . easonable to specu- late that lf the industrials had advanced anything lik oin 0 a five-day period that the fact would have been rather widely he valent utility advance went, unnotieed. ou.side In the process of its advance, ct l(ijJ- ompany index actually produced a breakaway gap sort of a – week ago. This formation is strikingly reminiscent of the simi b t industrial index at the end of March when the present advance be a 0 lar superstition, incidentally, if this gap is truly of a breakaway nat t 0 lkely that it will notbe filled; i. e. there is no necessity for the imle to the area, around129, where the gap took place. At almost the e time as the dull utilities were moving ahead in a straight -line advance, so-called glamour issues were displaying their characteristic volatility — this time on the downside. Control Data, which had posted a high of 174 as recently as mid-June, wound up the week at 148 1/4, and this performance was, by and large, typical of a host of stocks that had been market leaders since mid-February. By and large, the improved action of a great many higher grade issues — the utilities are only one example — war, noticeable during the past couple of weeks. We have talked before in this space about the necessity for rotational leadership in the market and, at the risk of becoming boring, we think it worthwhile to stat e again that the emergence of new leadership is crucial to a sustained market rise. The hightechnology leaders of the 1967 advance have, by and large returned to prices approximately equalling the levels they had re.ached a year ago — levels from which they subsequently declined, in some cases, 300/0 to 500/0. We do not think it reasonable to suppose that, from current levels, they have sufficient vigor to move the market to any great degree. What must take place at this stage, if the advance is to be sustained, is a more widespread investor recognition of the prospects of hitherto neglected groups. If this takes place, and we see no reason why it shOUld not, we think that the lllvestment climate for the coming months can continue to be extremely favorable. Dow-Jones Ind. 897.80 Dow-Jones Rails 261. 77 ANTHONY W. TABELL WALSTON & CO. INC. AWTamb Thus market letter is I)uhllshed for your COtlVlmence Rnd )nfOrmflhon Rnd )'l not an offel to seU or I SOhCltatlOn to buy In 'eCUntle, ,hcussed The Information was obtained from sources we beheve to be rehabl but we do not guarante(! Its accurllC Wal'lton 8. Co, Inc and It, ofikels, dlrcct)rs or etnDJoyees may have an Interest ltl or purchlLIe And sell the secuntu's I eferred to hel elf' WN301