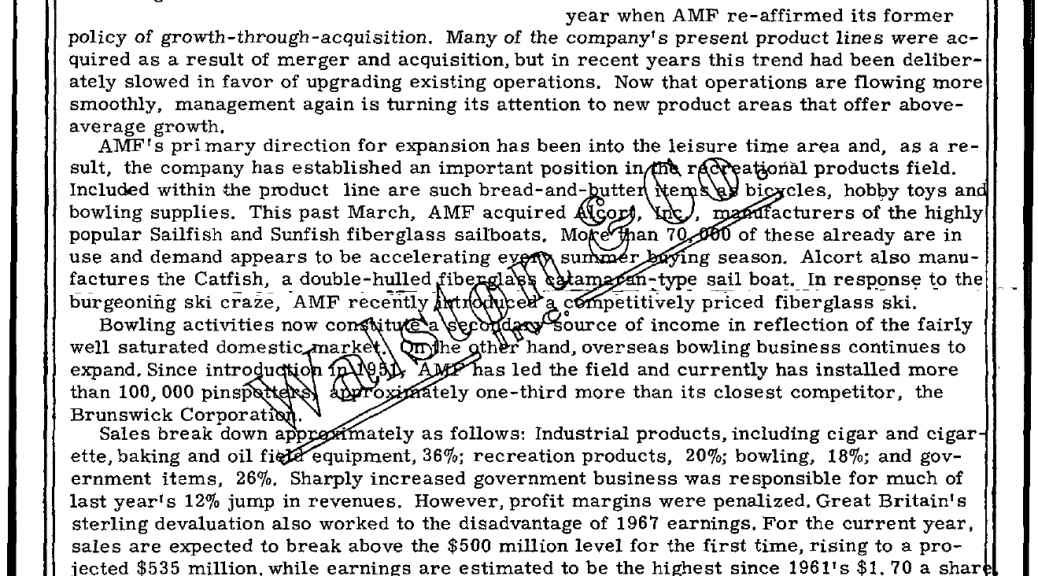 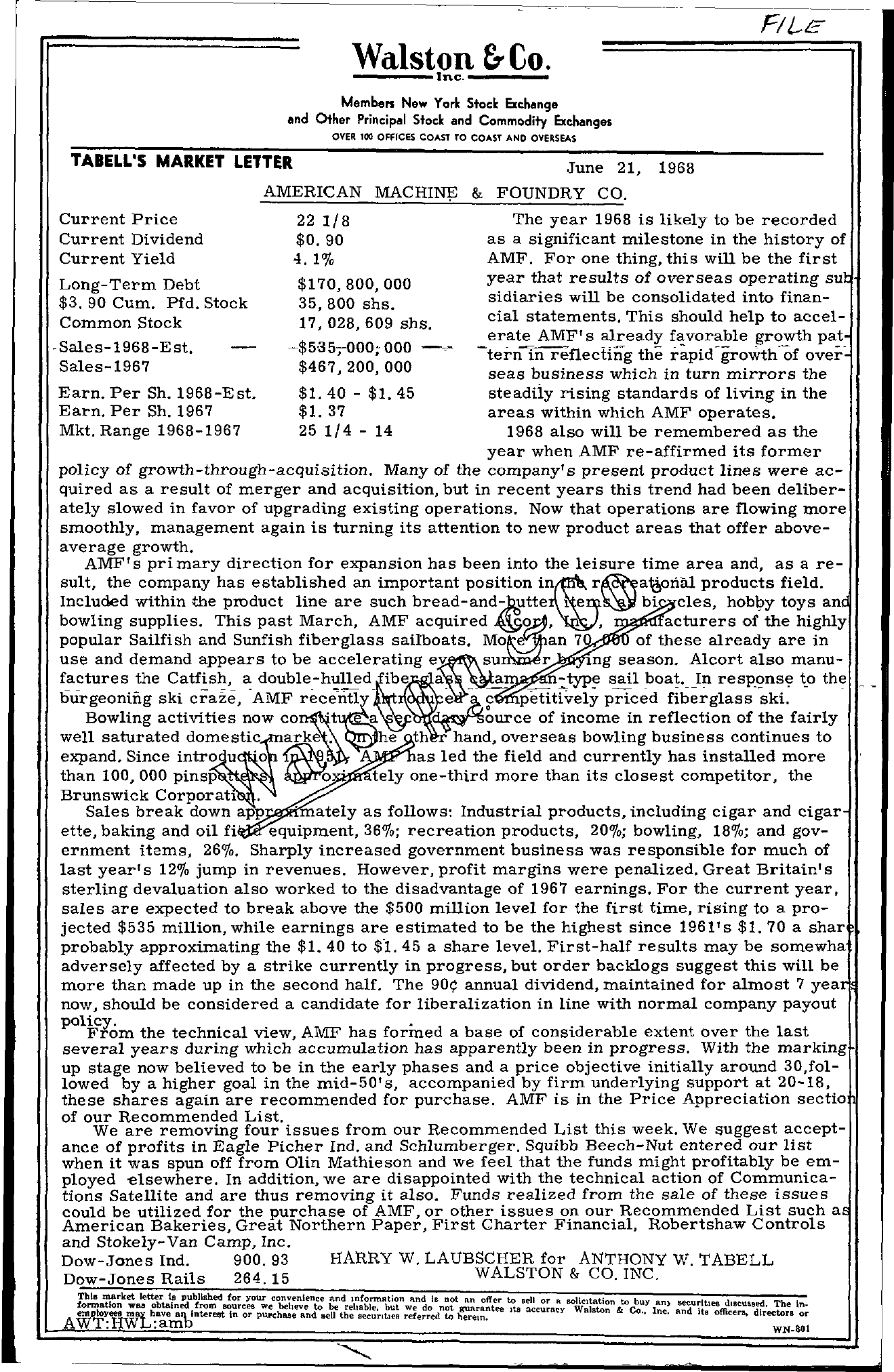 ———– Walston&- Co. Members New York Stock Exchange and Other Principal Stock and Commodity Exchanges OVER 100 OFFICES COAST TO COAST AND OVERSEAS TABELL'S MARKET LETTER June 21, 1968 AMERICAN & FOUNDRY CO. Current Price 22 1/8 The year 1968 is likely to be recorded Current Dividend 0.90 as a significant milestone in the history of Current Yield 4.10/0 AMF. For one thing, this will be the first Long-Term Debt 3. 90 Cum. Pfd. Stock Common Stock . Sales-1968-Est. Sa1es-1967 170,800,000 35,800 shs. 17, 028, 609 shs. 467,200,000 year that results of overseas operating su sidiaries will be consolidated into financial statements. This should help to accelerate AMF's already favorable growth pat -tern in reflecting the rapid-growthof over seas business which in turn mirrors the Earn. Per Sh. 1968-Est. 1. 40 – 1. 45 steadiiy rising standards of living in the Earn. Per Sh. 1967 1. 37 areas within which AMF operates. Mkt. Range 1968-1967 251/4-14 1968 also will be remembered as the year when AMF re-affirmed its former policy of growth-through-acquisition. Many of the company's present product lines were ac- quired as a result of merger and acquisition, but in recent years this trend had been deliber- ately slowed in favor of upgrading existing operations. Now that operations are flowing more smoothly, management again is turning its attention to new product areas that offer above- average growth. AMF's pri mary direction for expansion has been into the leisure time area and, as a re- sult, the company has established an important position products field. Included within ,the product line are such I e bi cles, hob!j)y toys an ,bowling supplies. This past March, AMF acquired acturers of the highly popular Sailfish and Sunfish fiberglass sailboats. Mo an 70 of these already are in use and demand appears to be accelerating r mg season. Alcort also manu- factures the a burgeoning ski craze, AMF recentl a . . boat. In to the J6f petitively priced fiberglass ski. Bowling activities now co t e a of income in reflection of the fairly expand. Since intro u '0 as led the field and currently has installed more than 100,000 pinsp tely one-third more than its closest competitor, the Brunswick Corporatl . Sales break down app . ately as follows Industrial products, including cigar and cigar ette, baking and oil fi equipment, 360/0; recreation products, 200/0; bowling, 180/0; and gov- ernment items, 260/0. Sharply increased government business was responsible for much of last year's 120/0 jump in revenues. However, profit margins were penalized. Great Britain's sterling devaluation also worked to the disadvantage of 1967 earnings. For the current year, sales are expected to break above the 500 million level for the first time, rising to a pro- jected 535 million, while earnings are estimated to be the highest since 1961's 1. 70 a shar probably approximating the 1. 40 to '1. 45 a share level. First-half results may be somewha adversely affected by a strike currently in progress, but order backlogs suggest this will be more than made up in the second half. The 90 annual dividend, maintained for almost 7 yea now, should be considered a candidate for liberalization in line with normal company payout policy. . From the technical view, AMF has formed a base of considerable extent over the last several years during which accumulation has apparently been in progress. With the marking up stage now believed to be in the early phases and a price objective initially around 30,fo1lowed by a higher goal in the mid-50's, accompanied by firm underlying support at 20-18, these shares again are recommended for purchase. AMF is in the Price Appreciation sectio of our Recommended List. We are removing four issues from our Recommended List this week. We suggest accept- ance of profits in Eagle Picher Ind. and SChlumberger. Squibb Beech-Nut entered our list when it was spun off from Olin Mathieson and we feel that the funds might profitably be em- ployed -elsewhere. In addition, we are disappointed with the technical action of Communica- tions Satellite and are thus removing it also. Funds realized from the sale of these issues could be utilized for the purchase of AMF, or other issues on our Recommended List such a American Bakeries, Great Northern Paper, First Charter Financial, Robertshaw Controls and Stokely-Van Camp, Inc. Dow-Jones Ind. 900. 93 Dow-Jones Rails 264. 15 HAlUW W. LAUBSCHER for ANTHONY W. TABELL WALSTON & CO. INC.