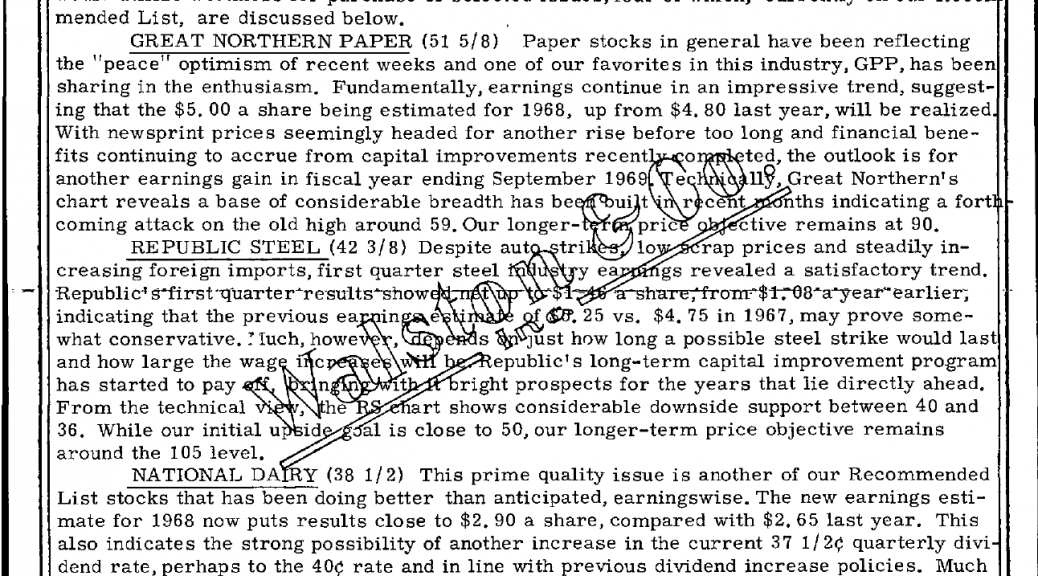 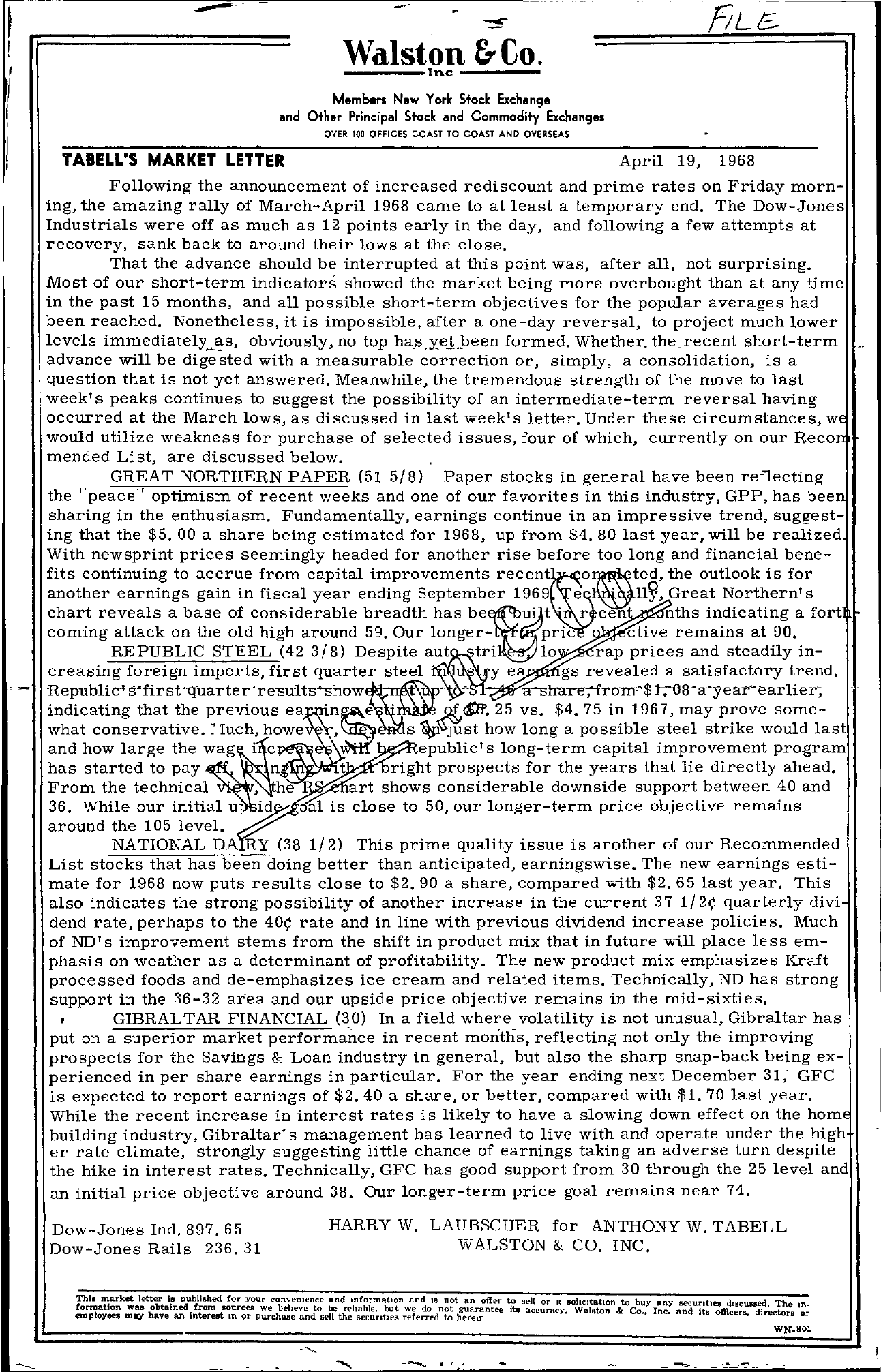 . f !, Walston &CO. —-Inc —- I Members New York Stock Exchange i, and Other Principal Stock and Commodity Exchange. OVER 100 OFFICES COAST TO COAST AND OVERSEAS TABELL'S MARKET LETTER April 19, 1968 Following the announcement of increased rediscount and prime rates on Friday morn- ing, the amazing rally of March-April 1968 came to at least a temporary end. The Dow-Jones Industrials were off as much as 12 points early in the day, and following a few attempts at recovery, sank back to around their lows at the close. That the advance should be interrupted at this point was, after all, not surprising. Most of our short-term indicators showed the market being more overbought than at any time in the past 15 months, and all possible short-term objectives for the popular averages had been reached. Nonetheless, it is impossible, after a one-day reversal, to project much lower levels obviously, no top has,ye.Lbeen formed. Whether. the.recent short-term advance will be digested with a measurable correction or, simply, a consolidation, is a question that is not yet answered. Meanwhile, the tremendous strength of the move to last week's peaks continues to suggest the possibility of an intermediate-term reversal having occurred at the March lows, as discussed in last week's letter. Under these circumstances, w would utilize weakness for purchase of selected issues, four of which, currently on our Reco mended List, are discussed below. GREAT NORTHERN PAPER (51 5/8) Paper stocks in general have been reflecting the peace optimism of recent weeks and one of our favorites in this industry, GPP, has been sharing in the enthusiasm. Fundamentally, earnings continue in an impressive trend, suggest- ing that the 5.00 a share being estimated for 1968, up from 4.80 last year, will be realized With newsprint prices seemingly headed for another rise before too long and financial bene- fits continuing to accrue from capital improvements the outlook is for another earnings gain in fiscal year ending September 1969 e Great Northern's chart reveals a base of considerable breadth has t' r cent nths indicating a fort coming attack on the old high around 59. Our longer- pric ctive remains at 90. REPUBLIC STEEL (42 3/8) Despite tri 10 rap prices and steadily in- creasing foreign imports, first quarter steel y ea gs revealed a satisfactory trend. Republic' indicating that the previous ea ins .. – a-shar e, fr W.cff. 25 vs. 4.75 in 1967, may prove some- what conservative. ,Iuch, howe, s how long a possible steel strike would last and how large the wag i c e epublic's long-term capital improvement program has started to pay 1t right prospects for the years that lie directly ahead. From the technical shows considerable downside support between 40 and 36. While our initial u al is close to 50, our longer-term price objective remains around the 105 level. NATIONAL DA RY (38 1/2) This prime quality issue is another of our Recommended List stocks that has been doing better than anticipated, earningswise. The new earnings esti- mate for 1968 now puts results close to 2.90 a share, compared with 2.65 last year. This also indicates the strong possibility of another increase in the current 37 1/2t; quarterly divi dend rate, perhaps to the 40t; rate and in line with previous dividend increase policies. Much of ND's improvement stems from the shift in product mix that in future will place less em- phasis on weather as a determinant of profitability. The new product mix emphasizes Kraft processed foods and de-emphasizes ice cream and related items. Technically, ND has strong support in the 36-32 area and our upside price objective remains in the mid-sixties. GIBRALTAR FINANCIAL (3.0) In a field where volatility is not unusual, Gibraltar has put on a superior market performance in recent moriths, reflecting not only the imprOving prospects for the Savings &. Loan industry in general, but also the sharp snap-back being ex- perienced in per share earnings in particular. For the year ending next December 31; GFC is expected to report earnings of 2.40 a share, or better, compared with 1. 70 last year. While the recent increase in interest rates is likely to have a slowing down effect on the hom building industry, Gibraltar's management has learned to live with and operate under the high er rate climate, strongly suggesting little chance of earnings taking an adverse turn despite the hike in interest rates. Technically, GFC has good support from 30 through the 25 level and an initial price objective around 38. Our longer-term price goal remains near 74. Dow-Jones Ind. 897. 65 Dow-Jones Rails 236.31 HARRY W. LAUBSCHER for A.NTHONY W. TABELL WALSTON & CO. INC. This market letter Is published for YOUr convemence and information lind IS not an offer to sell or II. soliCitation to buy any 8(!('Qflties thBCussed Th tonnation was obtained from soureea we beheve to be rehable. but we do not guarantee Its accuraey, Wailiton & Co.. Inc. Rnd Ita officers e In- eml'loyees may have an Interest In or pUFchaae and sell the referred to herem TU or WN.801 -. …– — —