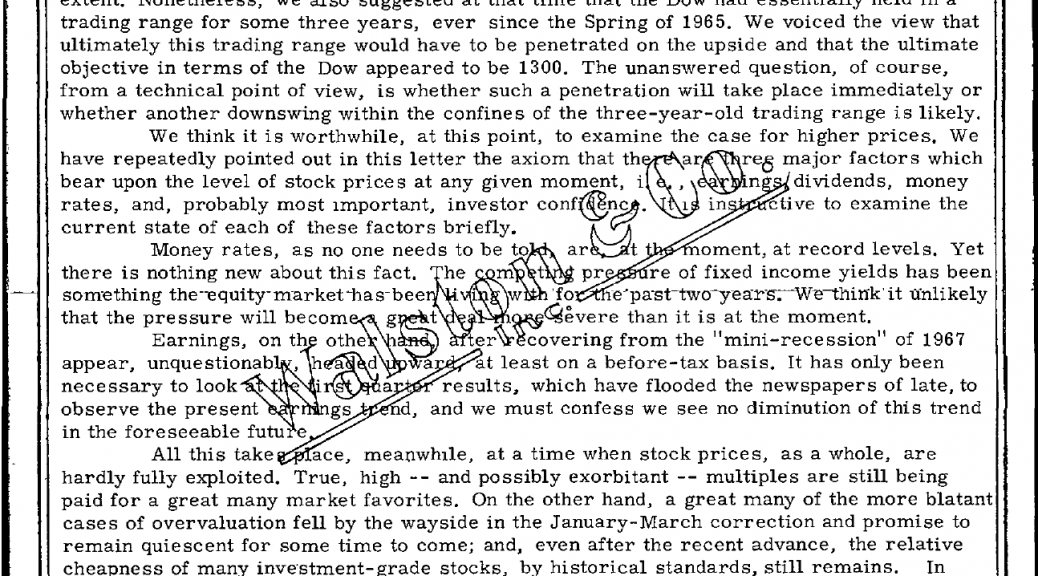 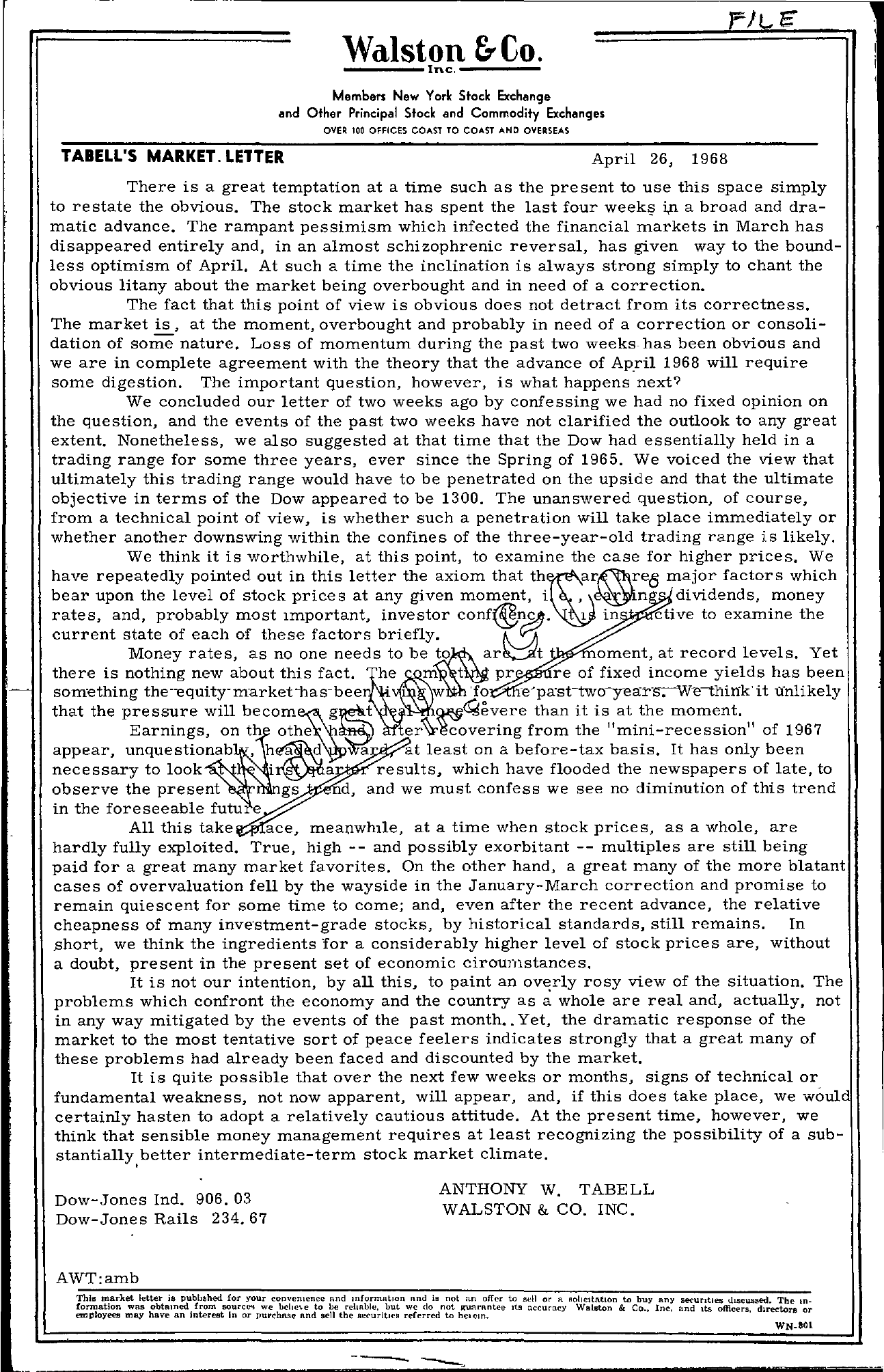 Walston &Co. —–Inc, —– Members New York Stock Exchange and Other Principal Stock and Commodity Exchanges OVER 100 OFFICES COAST TO COAST AND OVERSEAS TABELL'S MARKET. LETTER April 26, 1968 There is a great temptation at a time such as the present to use this space simply to restate the obvious. The stock market has spent the last four week i,n a broad and dra- matic advance. The rampant pessimism which infected the financial markets in March has disappeared entirely and, in an almost schizophrenic reversal, has given way to the bound- less optimism of April. At such a time the inclination is always strong simply to chant the obvious litany about the market being overbought and in need of a correction. The fact that this point of view is obvious does not detract from its correctness. The market is, at the moment, overbought and probably in need of a correction or consoli- dation of some nature. Loss of momentum during the past two been obvious and we are in complete agreement with the theory that the advance of April 1968 will require some digestion. The important question, however, is what happens next We concluded our letter of two weeks ago by confessing we had no fixed opinion on the question, and the events of the past two weeks have not clarified the outlook to any great extent. Nonetheless, we also suggested at that time that the Dow had essentially held in a trading range for some three years, ever since the Spring of 1965. We voiced the view that ultimately this trading range would have to be penetrated on the upside and that the ultimate objective in terms of the Dow appeared to be 1300. The unanswered question, of course, from a technical point of view, is whether such a penetration will take place immediately or whether another downswing within the confines of the three-year-old trading range is likely. We think it is worthwhile, at this point, to examine the case for higher prices. We have repeatedly pointed out in this letter the axiom that major factors which bear upon the level of stock prices at any given moment, i dividends, money rates, and, probably most Important, investor conf.nSh. I in current state of each of these factors briefly. 1\ ctive to examine the Money rates, as no one needs to be oment, at record levels. Yet there is nothing new about this fact. t pr re of fixed income yields has been the–equity-market-has-bee . I w 'foe'pa'st-two-y-ears–W-e-thinkit unlikely that the pressure will Earnings, on th othe than it is at the moment. from the mini-recession of 1967 appear, unquestionab a at least on a before-tax basis. It has only been necessary to look results, which have flooded the newspapers of late, to observe the present gs d, and we must confess we see no diminution of this trend in the foreseeable futu e All this take meanwhIle, at a time when stock prices, as a whole, are hardly fully exploited. True, high — and possibly exorbitant — multiples are still being paid for a great many market favorites. On the other hand, a great many of the more blatant cases of overvaluation fell by the wayside in the January-March correction and promise to remain quiescent for some time to come; and, even after the recent advance, the relative cheapness of many inve'stment-grade stocks, by historical standards, still remains. In .short, we think the ingredients Tor a considerably higher level of stock prices are, without a doubt, present in the present set of economic ciroumstances. It is not our intention, by all this, to paint an oVlrly rosy view of the situation. The problems which confront the economy and the country as a whole are real and, actually, not in any way mitigated by the events of the past month. Yet, the dramatic response of the market to the most tentative sort of peace feelers indicates strongly that a great many of these problems had already been faced and discounted by the market. It is quite possible that over the next few weeks or months, signs of technical or fundamental weakness, not now apparent, will appear, and, if this does take place, we would certainly hasten to adopt a relatively cautious attitude. At the present time, however, we think that sensible money management requires at least recognizing the possibility of a sub- stantially,better intermediate-term stock market climate. Dow-Jones Ind. 906. 03 Dow-Jones Rails 234.67 ANTHONY W. TABELL WALSTON & CO. INC. AWTamb This market l('tter is puhhshed for your Rnd Informlllion nnd Is not an offer to sell or II. RotlcllatLon to buy Hny se'Uritles ulscussed. The in- formation was obtRlned from sourcc'J we hellc\e to be r(!hnbl(!, but. we do not ItUnrantee Its nccumcy Walston & Co., Inc, Rnd Its officers, directors or —- -,emDloyees may have an Interest in or IJurchase and sell the sl.!curltJeB referred to helem. WN801