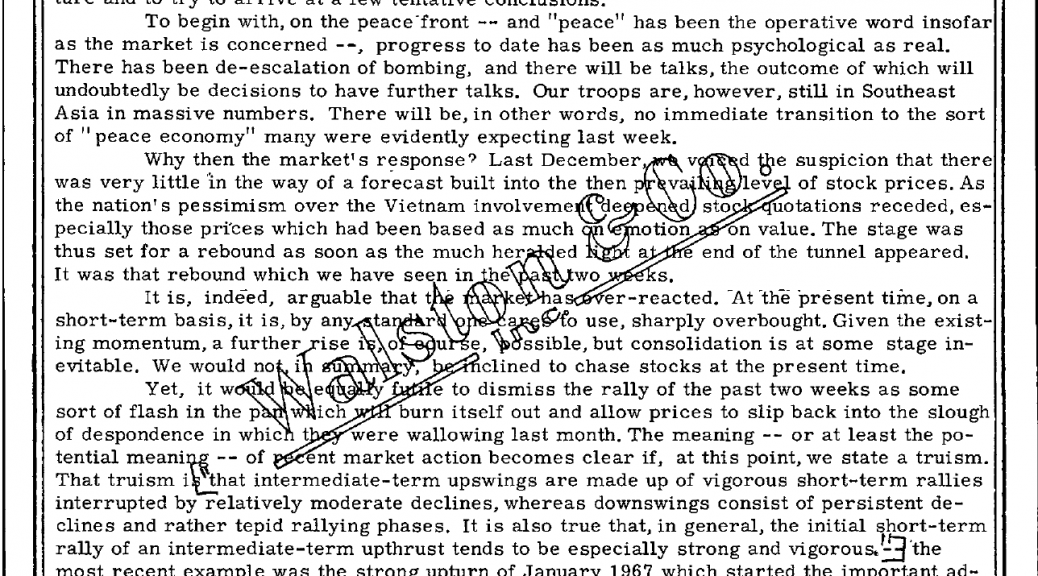 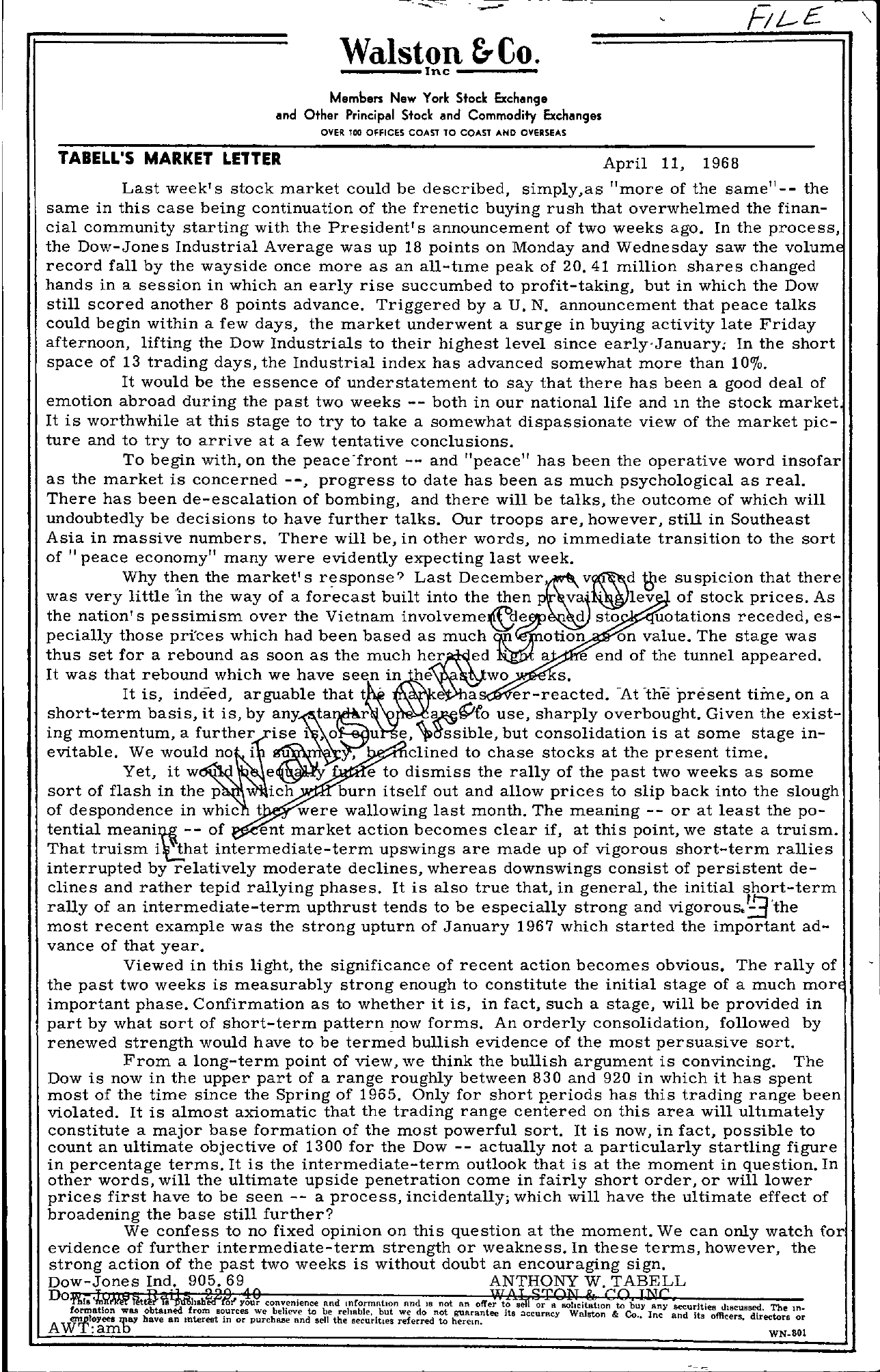 Walston &CO. —-Inc ;…-…;.– Members New York Stock Exchange and Other Principal Stock and Commodity Exchange. OVER 100 OFFICES COAST TO COAST AND OVERSEAS TABEll'S MARKET lETTER April 11, 1968 Last week's stock market could be described, simply,as more of the same — the same in this case being continuation of the frenetic buying rush that overwhelmed the finan- cial community starting with the President's announcement of two weeks ago. In the process, the Dow-Jones Industrial Average was up 18 points on Monday and Wednesday saw the volum record fall by the wayside once more as an all-hme peak of 20.41 million shares changed hands in a session in which an early rise succumbed to profit-taking, but in which the Dow still scored another 8 points advance. Triggered by aU. N. announcement that peace talks could begin within a few days, the market underwent a surge in buying activity late Friday afternoon, lifting the Dow Industrials to their highest level since early'January; In the short space of 13 trading days, the Industrial index has advanced somewhat more than 100/0, It would be the essence of understatement to say that there has been a good deal of emotion abroad during the past two weeks — both in our national life and III the stock market It is worthwhile at this stage to try to take a somewhat dispassionate view of the market piC- ture and to try to arrive at a few tentative conclusions. To begin with, on the peace'front — and peace has been the operative word insofar as the market is concerned –, progress to date has been as much psychological as real. There has been de-escalation of bombing, and there will be talks, the outcome of which will undoubtedly be decisions to have further talks. Our troops are, however, still in Southeast Asia in massive numbers. There will be, in other words, no immediate transition to the sort of peace economy many were evidently expecting last week. Why th,en the market's response Last gte suspicion that there was very little in the way of a forecast built into the then of stock prices. As the nation's pessimism over the Vietnam d sto uotations receded, es- pecially those prices which had been based as much otion on value. The stage was thus set for a rebound as soon as the much a e end of the tunnel appeared. It was that rebound which we have seen in he wo s. It is, indeed, arguable that t . e a er-reacted. At lhe present time, on a short-term basis, it is, by any ta r !Pio use, sharply overbought. Given the exist- \ evitable. We would no i ,clined to chase stocks at the present time. Yet, it w e e to dismiss the rally of the past two weeks as some sort of flash in the p ich burn itself out and allow prices to slip back into the slough of despondence in whic t were wallowing last month. The meaning — or at least the po- tential of ent market action becomes clear if, at this point, we state a truism. That truism i(!hat intermediate-term upswings are made up of vigorous short-term rallies interrupted by relatively moderate declines, whereas downswings consist of persistent de- clines and rather tepid rallying phases. It is also true that, in general, the initial short-term rally of an intermediate-term upthrust tends to be especially strong and most recent example was the strong upturn of January 1967 which started the important ad- vance of that year. Viewed in this light, the significance of recent action becomes obvious. The rally of the past two weeks is measurably strong enough to constitute the initial stage of a much mor important phase. Confirmation as to whether it is, in fact, such a stage, will be provided in part by what sort of short-term pattern now forms. An orderly consolidation, followed by renewed strength would have to be termed bullish evidence of the most persuasive sort. From a long-term point of view, we think the bullish argument is convincing. The Dow is now in the upper part of a range roughly between 830 and 920 in which it has spent most of the time since the Spring of 1965. Only for short p.eriods has this trading range been violated. It is almost axiomatic that the trading range centered on this area will ulhmately constitute a major base formation of the most powerful sort. It is now, in fact, possible to count an ultimate objective of 1300 for the Dow — actually not a particularly startling figure in percentage terms. It is the intermediate-term outlook that is at the moment in question. In other words, will the ultimate upside penetration come in fairly short order, or will lower prices first have to be seen — a process, incidentally; which will have the ultimate effect of broadening the base still further We confess to no fixed opinion on this question at the moment. We can only watch for evidence of further intermediate-term strength or weakness. In these terms, however, the strong action of the past two weeks is without doubt an encouraging sign. Dow-Jones Ind. 905.69 ANTHONY W. TABELL DOl,BKlIM!i'ltJISaiM,18 19 , Wi\U;TOW CO, JNc0 your conven enee nnd lnformRtion find 18 not an offer to sell or R IIOhei&ta,tlOn to buy Rny seeurJtle t.I sed Th formntlon WB.8 obtained from lIources we believe to be rehable, but we do not guarantee its l.CCUrRcy Walston & Co. lnc and it dl' toe In- en1…J!.fOYeeI!I tpB)' have an mterest in or purchase and sell the sccuritus referred to herein. S 0 eers. ree rs or A WTamO WN.'O'