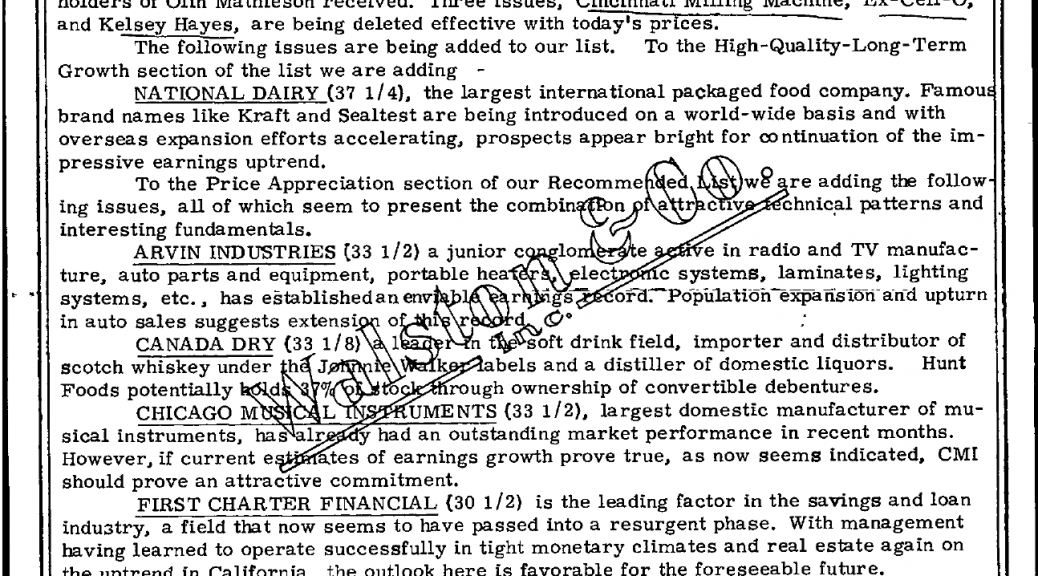 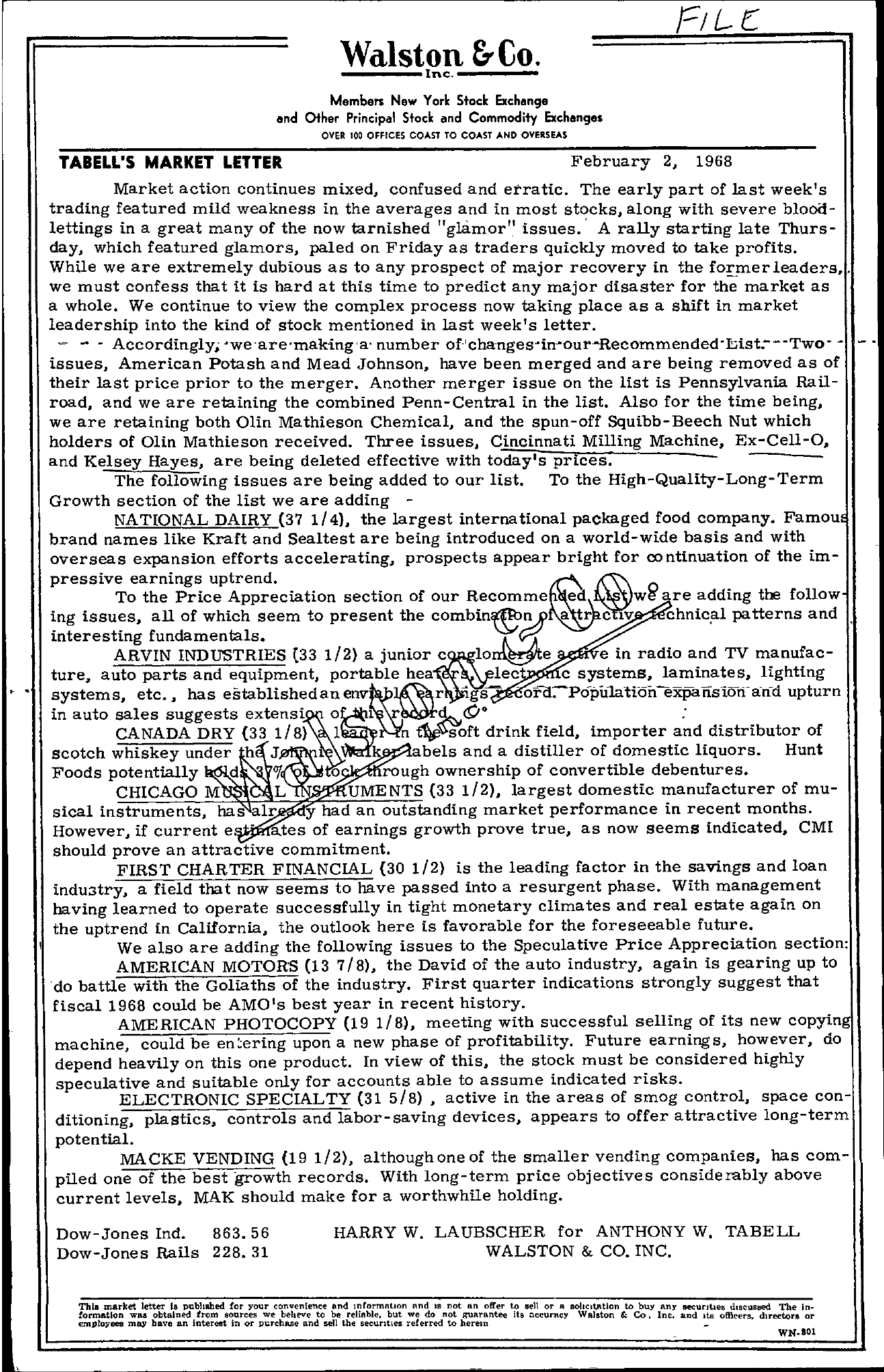 Walston &Co.- .;;…; Inc. Members New York Stock Exchange and Other Principal Stock and Commodity Exchanges OVER 100 OFFICES COAST TO COAST AND OVERSEAS TABELL'S MARKET LETTER February 2, 1968 Market action continues mixed, confused and erratic. The early part of last week's trading featured mild weakness in the averages and in most stocks, along with severe bloodlettings in a great many of the now tarnished glli.mor issues.' A rally starting late Thursday, which featured glamors, paled on Friday as traders quickly moved to take profits. While we are extremely dubious as to any prospect of major recovery in the former leaders, . we must confess that it is hard at this time to predict any major disaster for the market as a whole. We continue to view the complex process now taking place as a shift in market leadership into the kind of stock mentioned in last week's letter. – – Accordingly, 'we'are'mak-ing'a' number of'changes-in-our-Recommendedi;ist.—Two- issues, American Potash and Mead Johnson, have been merged and are being removed as of their last price prior to the merger. Another merger issue on the list is Pennsylvania Railroad, and we are retaining the combined Penn-Central in the list. Also for the time being, we are retaining both Olin Mathieson Chemical, and the spun-off Squibb-Beech Nut which holders of Olin Mathieson received. Three issues, Cincinnati Milling Machine, Ex-Cell-O. and Kelsey Hayes, are being deleted effective with today's prices. The following issues are being added to our list. To the High-Quality-Long-Term Growth section of the list we are adding NA TIONAL DAIRY (37 1/4), the largest international packaged food company. Famou brand names like Kraft and Sealtest are being introduced on a world-wide basis and with overseas expansion efforts accelerating, prospects appear bright for continuation of the im- pressive earnings uptrend. To the Price Appreciation section of our Recomme ed w! are adding the follow ing issues, all of which seem to present the combinenJ a tr c lV chnic!11 patterns and interesting fundamentals. P. ARVIN INDm5TRIES (33 1/2) a e in radio and TV manufac- . . ture, auto parts and systems, etc., has portable hea . gs …. oro. PopulatlOn expanslOn and upturn in auto sales suggests CANADA DRY (33 1/8) I n drink field, importer and distributor of scotch whiskey under h J I k bels and a distiller of domestic liquors. Hunt Foods potentially d 0/. 0 rough ownership of convertible debentures. CHICAGO M L UMENTS (33 1/2), largest domestic manufacturer of mu- sical instruments, has y had an outstanding market performance in recent months. However, if current e . ates of earnings growth prove true, as now seems indicated, CMI should prove an attractive commitment. FIRST CHARTER FINANCIAL (30 1/2) is the leading factor in the savings and loan indu3try, a field that now seems to have passed into a resurgent phase. With management having learned to operate successfully in tight monetary climates and real estate again on the uptrend in California, the outlook here is favorable for the foreseeable future. We also are adding the following issues to the Speculative Price Appreciation section AMERICAN MOTORS (137/8), the David of the auto industry, again is gearing up to 'do battle with the Goliaths of the industry. First quarter indications strongly suggest that fiscal 1968 could be AMO's best year in recent history. AMERICAN PHOTOCOPY (19 1/8), meeting with successful selling of its new copying machine, could be upon a new phase of profitability. Future earnings, however, do depend heavily on this one product. In view of this, the stock must be considered highly speculative and suitable only for accounts able to assume indicated risks. ELECTRONIC SPECIALTY (31 5/8) , active in the areas of smog control, space con- ditioning, plastics, controls and labor-saving devices, appears to offer attractive long-term potential. MACKE VENDING (19 1/2), although one of the smaller vending companies, has com- piled one of the best growth records. With long-term price objectives considerably above current levels, MAK should make for a worthwhile holding. Dow-Jones Ind. 863.56 Dow-Jones Rails 228.31 HARRY W. LAUBSCHER for ANTHONY W. TABELL WALSTON & CO. INC. This market letter 18 published for your convenience and and IS not an offer to sell or a soIlclt,Rtion to buy any securities diSCUSsed The In- formation was obtained from sources we beheve W be rehable. but we do not guarantee Its lccuracy Wall1ton &. Co. Inc. and lUi officers. directors or emDloyeea may have an interest in or pUl'chase and sell the securltLCs referred to herem WNBOl