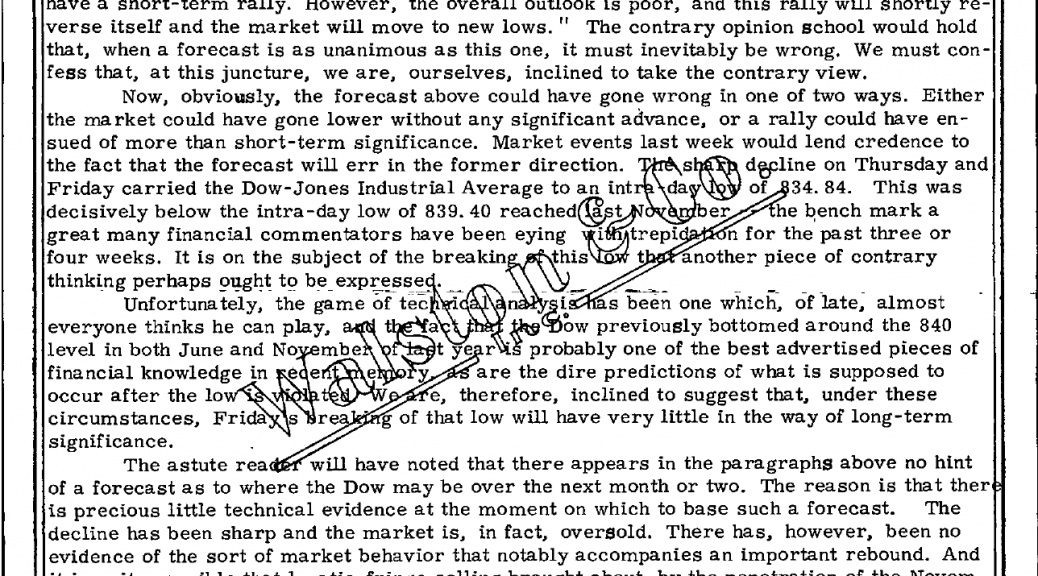 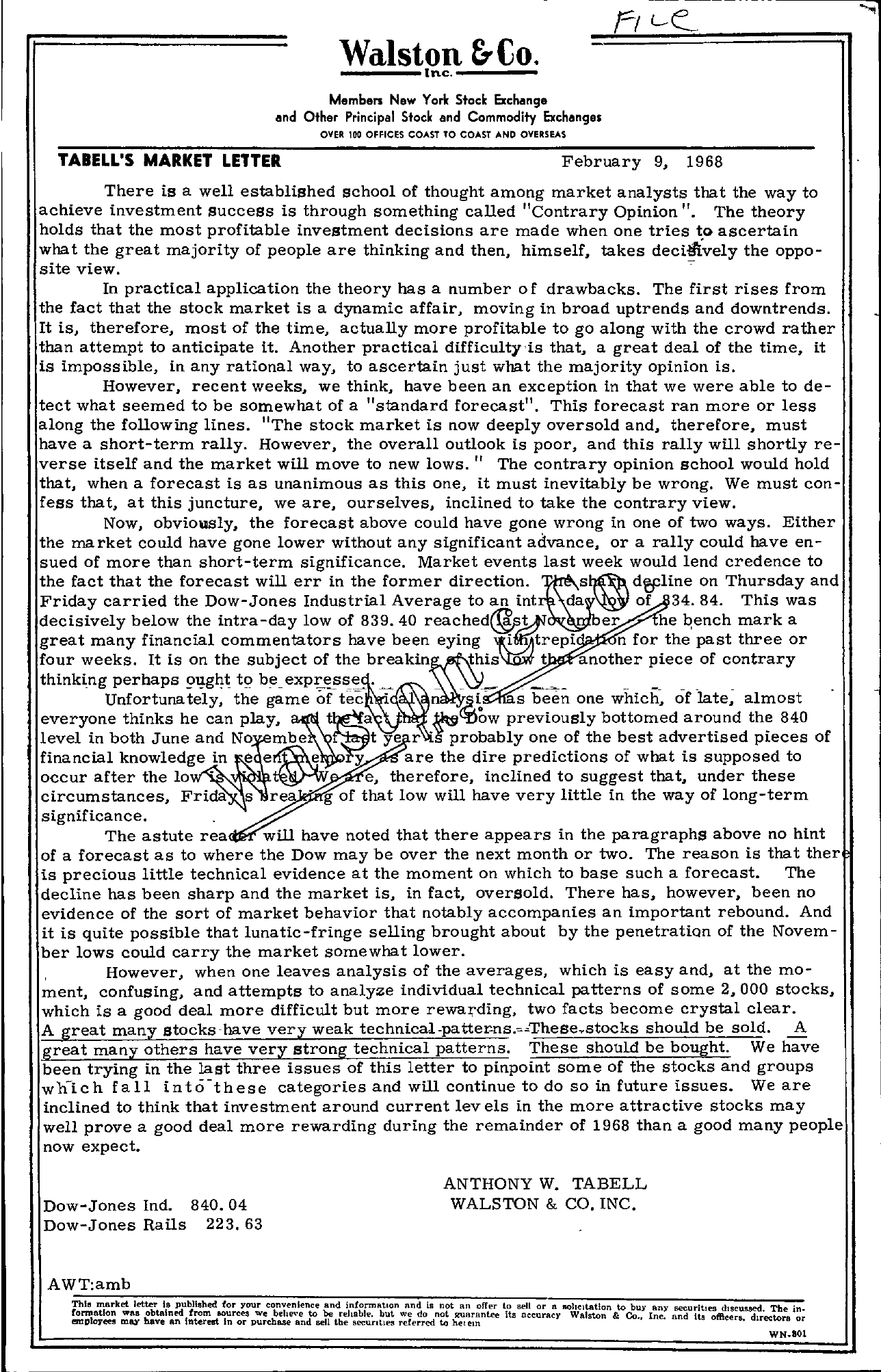 Walston &Co. …;…..;.,;.;;;…;..; Inc. ;;.–…;..- Members New York Stock Exchange and Other Principal Stock and Commodity Exchange. OVER 100 OFFICES COAST TO COAST AND OVERSEAS TABEll'S MARKET lETTER February 9, 1968 There is a well established school of thought among market analysts that the way to achieve investment success is through something called Contrary Opinion . The theory holds that the most profitable investment decisions are made when one tries to ascertain what the great majority of people are thinking and then, himself, takes site view. – the oppo- In practical application the theory has a number 0 f drawbacks. The first rises from the fact that the stock market is a dynamic affair, moving in broad uptrends and downtrends. It is, therefore, most of the time, actually more profitable to go along with the crowd rather than attempt to anticipate it. Another practical difficultY'is that, a great deal of the time, it is impossible, in any rational way, to ascertain just what the majority opinion is. However, recent weeks, we think, have been an exception in that we were able to de- tect what seemed to be somewhat of a standard forecast. This forecast ran more or less along the following lines. The stock market is now deeply oversold and, therefore, must have a short-term rally. However, the overall outlook is poor, and this rally will shortly re- verse itself and the market will move to new lows. The contrary opinion school would hold that, when a forecast is as unanimous as this one, it must inevitably be wrong. We must con- fess that, at this juncture, we are, ourselves, inclined to take the contrary view. Now, obviously, the forecast above could have gone wrong in one of two ways. Either the market could have gone lower without any significant advance, or a rally could have en- sued of more than short-term significance. Market events last week would lend credence to the fact that the forecast will err in the former direction. dtfline on Thursday and Friday carried the Dow-Jones Industrial Average to an int da of 34.84. This was decisively below the intra-day low of 839.40 reachedW er he qench mark a great many financial commentators have been eying 'riMMtrepi n for the past three or four weeks. It is on the subject of the t another piece of contrary thinking perhaps ought to be ofUnfortuna the game tee s beeii. one which, of late, almost everyone thinks he can play, level in both June and No mbe previously bottomed around the 840 t ye r probably one of the best advertised pieces of financial knowledge in e Y. are the dire predictions of what is supposed to occur after the 10 . . e, therefore, inclined to suggest that, under these circumstances, Frida . g of that low will have very little in the way of long-term significance. The astute rea will have noted that there appears in the paragraphs above no hint of a forecast as to where the Dow may be over the next month or two. The reason is that ther is precious little technical evidence at the moment on which to base such a forecast. The decline has been sharp and the market is, in fact, oversold. There has, however, been no evidence of the sort of market behavior that notably accompanies an important rebound. And it is quite possible that lunatic-fringe selling brought about by the penetration of the Novem- ber lows could carry the market somewhat lower. , However, when one leaves analysis of the averages, which is easy and, at the mo- ment, confUSing, and attempts to analyze individual technical patterns of some 2,000 stocks, which is a good deal more difficult but more rewarding, two facts become crystal clear. A great many stocks-have very weak should be sold. great many others have very strong technical patterns. These shOUld be bought. We have been trying in the last three issues of this letter to pinpoint some of the stocks and groups wnich fall into-these categories and will continue to do so in future issues. We are inclined to think that investment around current levels in the more attractive stocks may well prove a good deal more rewarding during the remainder of 1968 than a good many people now expect. Dow-Jones Ind. 840.04 Dow-Jones Rails 223. 63 ANTHONY W. TABELL WALSTON & CO. INC. AWTamb Thill market letter 1.8 published for your convenience and information nnd III not an offer to sell or a BOhcltation to buy any securities diSCussed Th . formation employeel'! was mlQ' obtained from sources we beliee to be rehable. but have an interest in or pUTChase and sell the securities rweeferdroedntoot guarantee helem its occuracy Walston & Co Ine d its oflI d toe In an cers. tree rs or WN.801