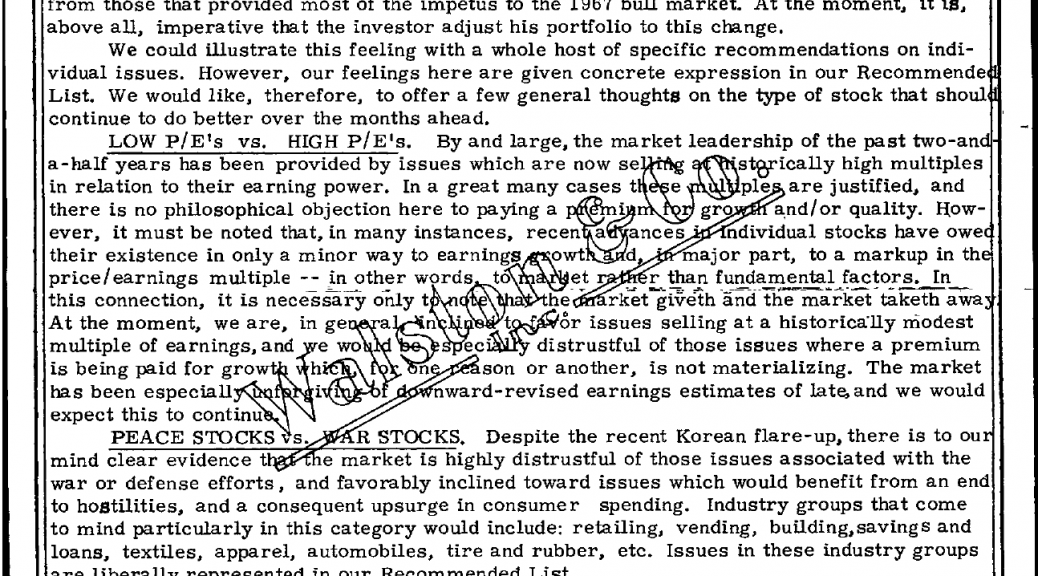 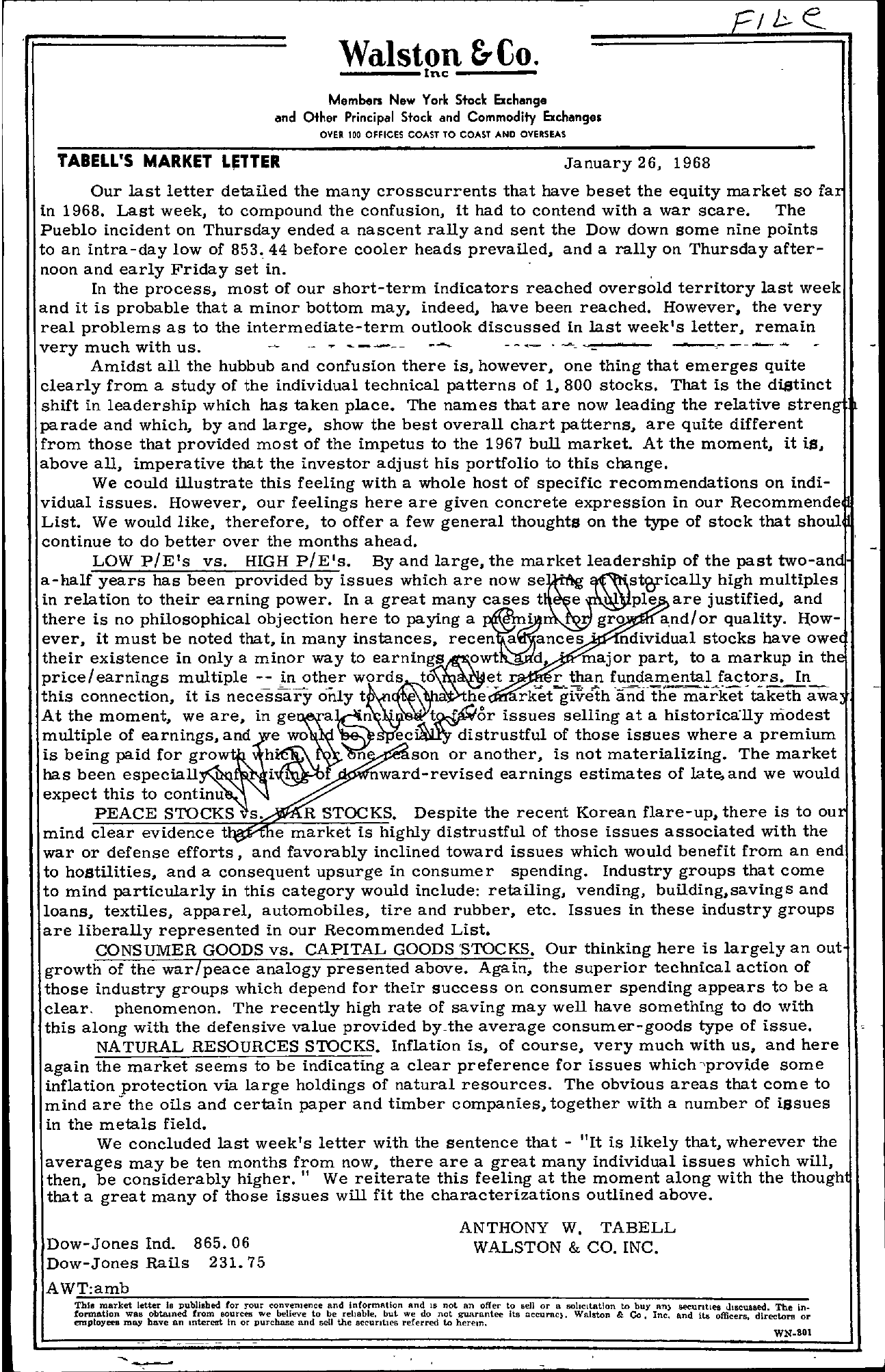 Walston &Co. Members New York Stock Exchange and Other Principal Stock and Commodity Exchange. OVER 100 OFFICES COAST TO COAST AND OVERSEAS TABELL'S MARKET LfETTER January 26, 1968 Our last letter detailed the many crosscurrents that have beset the equity market so fa in 1968. Last week, to compound the confUSion, it had to contend with a war scare. The Pueblo incident on Thursday ended a nascent rally and sent the Dow down some nine points to an intra-day low of 853. 44 before cooler heads prevailed, and a rally on Thursdayafter- noon and early Friday set in. , In the process, most of our short-term indicators reached oversold territory last week and it is probable that a minor bottom may, indeed, have been reached. However, the very real problems as to the intermediate-term outlook discussed in last week's letter, remain – r – – – -very much with us. – – – -.. — –.- '–' Amidst all the hubbub and confusion there is, however, one thing that emerges quite clearly from a study of the individual technical patterns of 1,800 stocks. That is the diStinct shift in leadership which has taken place. The names that are now leading the relative stren parade and which, by and large, show the best overall chart patterns, are quite different from those that provided most of the impetus to the 1967 bull market. At the moment, it is, above all, imperative that the investor adjust his portfolio to this change. We could illustrate this feeling with a whole host of specific recommendations on indi- vidual issues. However, our feelings here are given concrete expression in our Recommende List. We would like, therefore, to offer a few general thoughts on the type of stock that shoul continue to do better over the months ahead. LOW pIE's vs. HIGH pIE's. By and large, the market leadership of the past two-an a-half years has been provided by issues which are now high multiples in relation to their earning power. In a great many cases t e pIe are justified, and there is no philosophical objection here to paying a gro a,nd/or quality. flow- ever, it must be noted that, in many instances, recen a ances' ndividual stocks have owe their existence in only a minor way to priceI earnings multiple — in other words to this connection, it is necessary only d' major part, to a markup in th et r r than fundamental factors. In he – rklgiVethaicttiiemarket-takethawa At the moment, we are, in issues selling at a historically modest multiple of earnings, and e wo distrustful of those issues where a premium is being paid for grow n son or another, is not materializing. The market has been especiall nward-revised earnings estimates of late, and we would expect this to continu PEACE STOCKS s. R STOCKS. Despite the recent Korean flare-up, there is to ou mind clear evidence t e market is highly distrustful of those issues associated with the war or defense efforts, and favorably inclined toward issues which would benefit from an end to hostilities, and a consequent upsurge in consumer spending. Industry groups that come to mind particularly in this category would include retailing, vending, building,savings and loans, textiles, apparel, automobiles, tire and rubber, etc. Issues in these industry groups are liberally represented in our Recommended List. CONSUMER GOODS vs. CAPITAL GOODS 'STOCKS. Our thinking here is largely an out growth of the war/peace analogy presented above. Again, the superior technical action of those industry groups which depend for their success on consumer spending appears to be a clear. phenomenon. The recently high rate of saving may well have something to do with this along with the defensive value provided bythe average consumer-goods type of issue. NA TURAL RESOURCES STOCKS. Inflation is, of course, very much with us, and here again the market seems to be indicating a clear preference for issues which 'provide some inflation protection via large holdings of natural resources. The obvious areas that come to mind are- the oils and certain paper and timber companies, together with a number of issues in the metals field. We concluded last week's letter with the sentence that – It is likely that, wherever the averages may be ten months from now, there are a great many individual issues which will, then, be considerably higher. We reiterate this feeling at the moment along with the though that a great many of those issues will fit the characterizations outlined above. Dow-Jones Ind. 865.06 Dow-Jones Rails 231. 75 ANTHONY W. TABELL WALSTON & CO. INC. AWTamb Thill market letter Is published tor your convenience and In(ormRtlon ILnd IS not an offer to sell or a soliCitation to buy II.n) securitLes ..hscU88ed The In 0;formation was obtaaned from sources we believe to be rellable. hut we do not guarantee Its o.ccurnc). Walston & Co. Inc. and itll officers, dl;ectors employeeB may have an mterest in or pUl'chase and sell the referred 1.0 herem. WN301