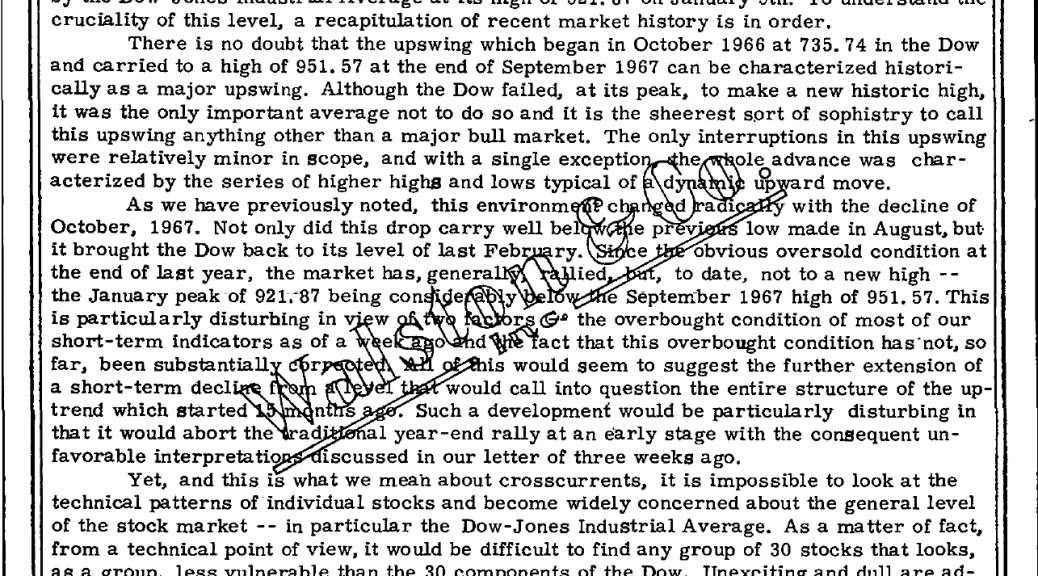 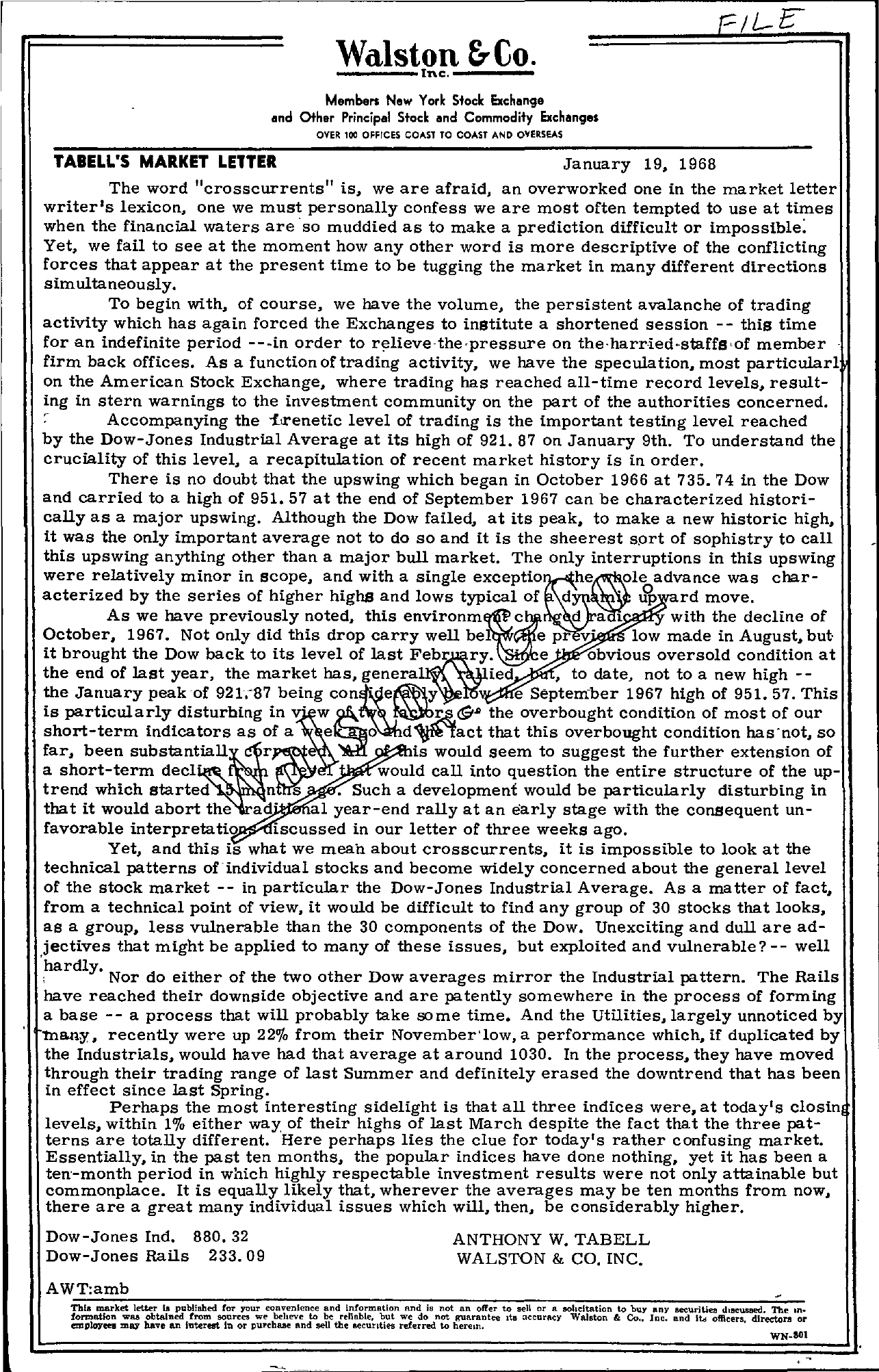 Walston &- Co. Inc. Members New York Stock Exchange and Other Principal Stock and Commodity Exchange. OVER 100 OFFICES COAST TO COAST AND oVERSEAS TABELL'S MARKET LElTER January 19, 1968 The word crosscurrents is, we are afraid, an overworked one in the market letter writer's lexicon, one we must personally confess we are most often tempted to use at times when the financial waters are 'so muddied as to make a prediction difficult or impossible Yet, we fail to see at the moment how any other word is more descriptive of the conflicting forces that appear at the present time to be tugging the market in many different directions simultaneously. To begin with, of course, we have the volume, the persistent avalanche of trading activity which has again forced the Exchanges to institute a shortened session — this time for an indefinite period —in order to on the,harried-staffsof member firm back offices. As a function of trading activity, we have the speculation, most particularl on the American Stock Exchange, where trading has reached all-time record levels, result- ing in stern warnings to the investment community on the part of the authorities concerned. Accompanying the -f.llenetic level of trading is the important testing level reached by the Dow-Jones Industrial Average at its high of 921. 87 on January 9th. To understand the cruciality of this level, a recapitulation of recent market history is in order. There is no doubt that the upswing which began in October 1966 at 735.74 in the Dow and carried to a high of 951.57 at the end of September 1967 can be characterized histori- cally as a major upswing. Although the Dow failed, at its peak, to make a new historic high, it was the only important average not to do so and it is the sheerest sprt of sophistry to call this upswing anything other than a major bull market. The only interruptions in this upswing were relatively minor in scope, and with a single advance was char- acterized by the series of higher highs and lows typical of d . rd move. As we have previously noted, this environm.a d a 1 with the decline of October, 1967. Not only did this drop carry well be e p v low made in August, but it brought the Dow back to its level of last ry. e obvious oversold condition at the end of last year, the market has, genera the January peak of being i is particularly disturhing in wS ied, to date, not to a new high -e September 1967 high of 951. 57. This .. the overbought condition of most of our short-term indicators as of a e 0 d.lact that this overbought condition has'not, so far, been 11 is would seem to suggest the further extension of a short-term declo would call into question the entire structure of the up- trend which started n s . Such a development would be particularly disturbing in that it would abort the ad al year-end rally at an early stage with the consequent un- favorable interpretatio lscussed in our letter of three weeks ago. Yet, and this is what we meah about crosscurrents, it is impossible to look at the technical patterns of'individual stocks and become widely concerned about the general level of the stock market — in particular the Dow-Jones Industrial Average. As a matter of fact, from a technical point of view, it would be difficult to find any group of 30 stocks that looks, as a group, less vulnerable than the 30 components of the Dow. Unexciting and dull are ad- )ectives that might be applied to many of these issues, but exploited and vulnerable — well ,hardly. Nor do either of the two other Dow averages mirror the Industrial pattern. The Rails have reached their downside objective and are patently somewhere in the process of forming a base — a process that will probably take some time. And the Utilities, largely unnoticed by tnany, recently were up 220/0 from their November'low, a performance which, if duplicated by the Industrials, would have had that average at around 1030. In the process, they have moved through their trading range of last Summer and definitely erased the downtrend that has been in effect since last Spring. Perhaps the most interesting sidelight is that all three indices were, at today's closin levels, within 10/0 either way of their highs of last March despite the fact that the three patterns are totally different. Here perhaps lies the clue for today's rather confUSing market. Essentially, in the past ten months, the popular indices have done nothing, yet it has been a ten'-month period in which highly respectable investment results were not only attainable but commonplace. It is equally likely that, wherever the averages may be ten months from now, there are a great many individual issues which will, then, be considerably higher. Dow-Jones Ind. 880. 32 Dow-Jones Rails 233.09 ANTHONY W. TABELL WALSTON & CO. INC. AWTamb This market letter ia published for your convenience Bnd Information Rnd is not an offer to sell or a sohcltation to buy any securities The In formation wu obtained from sources we beheve to be reliable. but we do not guarantee Its accuracy Wa1ston & Co., Inc. and Ild officers. director!! or employee'll may have an interest In or pUFcbue Bnd sell the securaties referred to herem. WNlOt