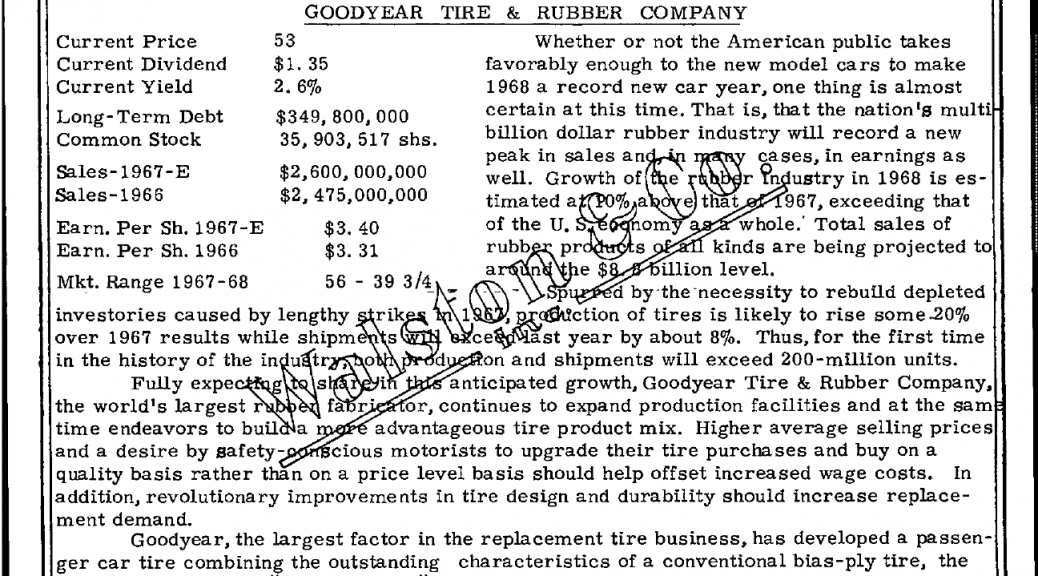 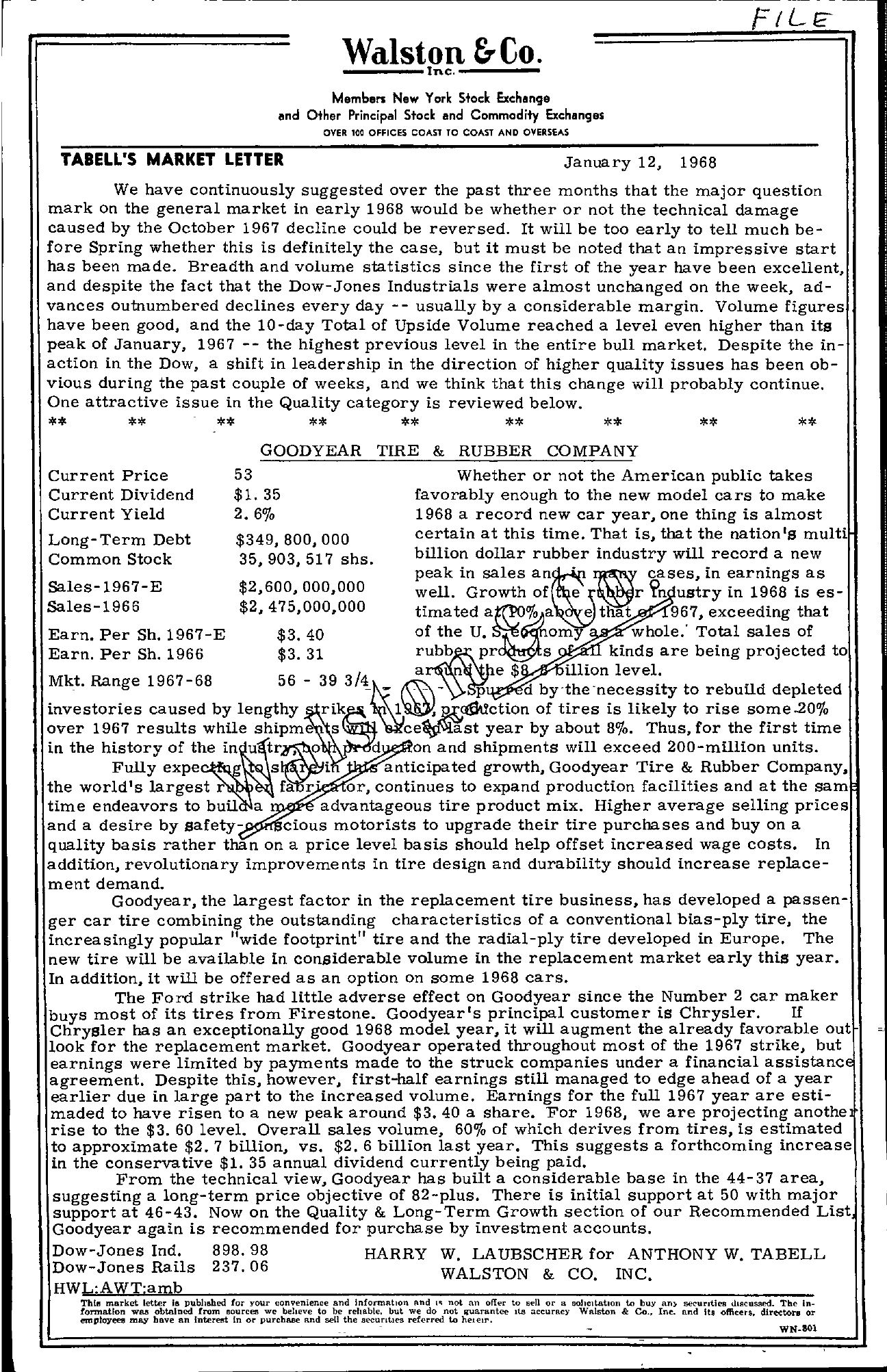 —- – W—a-lsItnocn.&–C-o-. Members New York Stock Exch.nge .nd Other Principal Stock and Commodity Exchange. OVER 100 OFFICES COAST TO COAST AND OVERSEAS TABELL'S MARKET LETTER January 12, 1968 We have continuously suggested over the past three months that the major question mark on the general market in early 1968 would be whether or not the technical damage caused by the October 1967 decline could be reversed. It will be too early to tell much be- fore Spring whether this is definitely the case, but it must be noted that an impressive start has been made. Breadth and volume statistics since the first of the year have been excellent, and despite the fact that the Dow-Jones Industrials were almost unchanged on the week, ad- vances outnumbered declines every day – – usually by a considerable margin. Volume figures have been good, and the 10-day Total of Upside Volume reached a level even higher than its peak of January, 1967 — the highest previous level in the entire bull market. Despite the in- action in the Dow, a shift in leadership in the direction of higher quality issues has been ob- vious during the past couple of weeks, and we think that this change will probably continue. One attractive issue in the Quality category is reviewed below. GOODYEAR TIRE & RUBBER COMPANY Current Price Current Dividend Current Yield Long-Term Debt Common Stock Sales-1967-E Sales-1966 53 1. 35 2.6 349, 800,000 35,903,517 shs. 2,600,000,000 2,475,000,000 Whether or not the American public takes favorably enough to the new model cars to make 1968 a record new car year, one thing is almost certain at this time. That is, that the nation's multi billion dollar rubber industry will record a new peak in sales well. Growth of e cases, in earnings as tn ustry in 1968 is es- timated a e tliat 967, exceeding that Earn. Per Sh.1967-E Earn. Per Sh. 1966 Mkt. Range 1967-68 3.40 3. 31 56 – 39 of the U. whole.' Total sales of pr s kinds are being projected to a n e illion level. pa to rebuild depleted investories caused by lengthy of tires is likely to rise some.20 over 1967 results while shipm s year by about 8. Thus, for the first time in the history of the in u d on and shipments will exceed 200-million units. Fullyexpe si antiCipated growth, Goodyear Tire & Rubber Company, the world's largest r fa r' or, continues to expand production facilities and at the sam time endeavors to buil a advantageous tire product mix. Higher average selling prices and a desire by safety- cious motorists to upgrade their tire purchases and buy on a quality basis rather thlin on a price level basis should help offset increased wage costs. In addition, revolutionary improvements in tire design and durability should increase replace- ment demand. Goodyear, the largest factor in the replacement tire business, has developed a passen- ger car tire combining the outstanding characteristics of a conventional bias-ply tire, the increasingly popular wide footprint tire and the radial-ply tire developed in Europe. The new tire will be available in considerable volume in the replacement market early this year. In addition, it will be offered as an option on some 1968 cars. The Ford strike had little adverse effect on Goodyear since the Number 2 car maker buys most of its tires from Firestone. Goodyear's principal customer is Chrysler. If Chrysler has an exceptionally good 1968 model year, it will augment the already favorable out look for the replacement market. Goodyear operated throughout most of the 1967 strike, but earnings were limited by payments made to the struck companies under a financial assistanc agreement. Despite this, however, first-half earnings still managed to edge ahead of a year earlier due in large part to the increased volume. Earnings for the full 1967 year are esti- maded to have risen to a new peak around 3.40 a share. For 1968, we are projecting anothe rise to the 3. 60 level. Overall sales volume, 60 of which derives from tires, is estimated to approximate 2.7 billion, vs. 2. 6 billion last year. This suggests a forthcoming increase in the conservative 1. 35 annual dividend currently being paid. From the technical view, Goodyear has built a considerable base in the 44-37 area, suggesting a long-term price objective of 82-plus. There is initial support at 50 with major support at 46-43. Now on the Quality & Long-Term Growth section of our Recommended List Goodyear again is recommended for purchase by investment accounts. Dow-Jones Ind. 898.98 HARRY W. LAUBSCHER for ANTHONY W. TABELL Dow-Jones Rails 237.06 WALSTON & CO. INC. HWLAWTamb Thlt! market letter is pubhshed for your convenience and InfornlRtlOn n.nd not fin offer to sell or a soliCitatIOn to buy an) securities diSCUssed. The Information waa obtained from lIources we believe to be rehable. but we do not sruarantee Its aCCUrRI'!Y Walston & Co., Inc. and Its officers. directors or employees may bave an Interm In or purchase and sell the secUrities referred to helelr. WN801