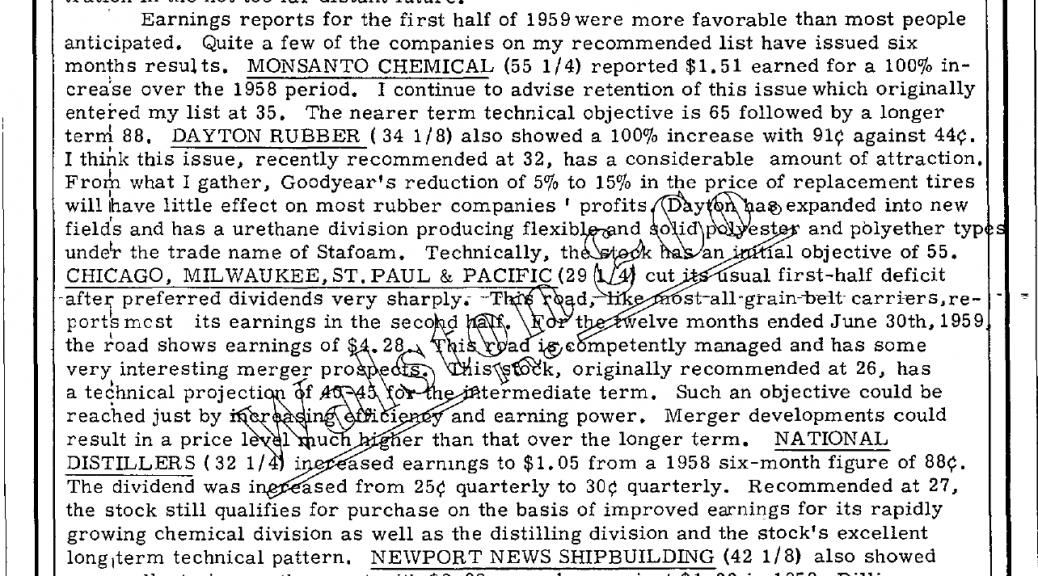 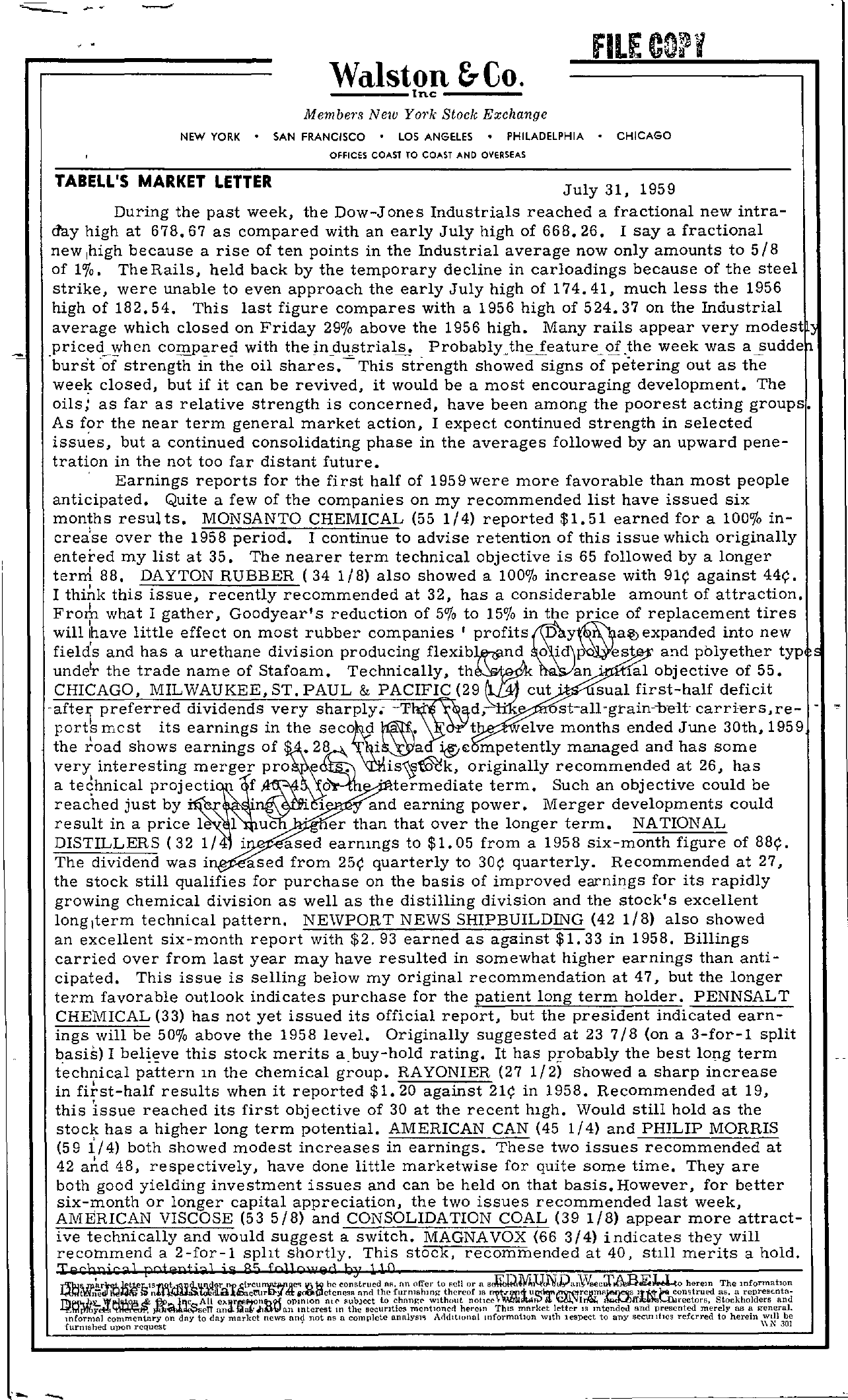 Walston &Co. Inc FILE M em be,',\ New YOTk Stock Exchange NEW YORK SAN FRANCISCO LOS ANGELES PHILADElPHIA CHICAGO OFFICES COAST TO COAST AND OVERSEAS TABEll'S MARKET lETTER July 31, 1959 During the past week, the Dow-Jones Industrials reached a fractional new intra- day high at 678.67 as compared with an early July high of 668.26. I say a fractional new ,high because a rise of ten points in the Industrial average now only amounts to 5/8 of 1. The Rails, held back by the temporary decline in carloadings because of the steel strike, were unable to even approach the early July high of 174.41, much less the 1956 high of 182.54. This last figure compares with a 1956 high of 524.37 on the Industrial average which closed on Friday 29 above the 1956 high. Many rails appear very modest ,pricedhcn compared with the industrials. of .the week was a.sudde burst 'of strength in the oil shares.- This strength showed signs of petering out as the week closed, but if it can be revived, it would be a most encouraging development. The oils; as far as relative strength is concerned, have been among the poorest acting groups. As for the near term general market action, I expect continued strength in selected issues, but a continued consolidating phase in the averages followed by an upward pene- tration in the not too far distant future. Earnings reports for the first half of 1959were more favorable than most people anticipated. Quite a few of the companies on my recommended list have issued six months results. MONSANTO CHEMICAL (55 1/4) reported 1.51 earned for a 1000/0 in- crea'se over the 1958 period. I continue to advise retention of this issue which originally entered my list at 35. The nearer term technical objective is 65 followed by a longer terrrl., 88. DAYTON RUBBER ( 34 1/8) also showed a 100 increase with against I think this issue, recently recommended at 32, has a considerable amount of attraction. Frofu what I gather, Goodyear's reduction of 5 to 15 in the price of replacement tires will little effect on most rubber companies ' into new fields and has a urethane division producing unde'r the trade name of Stafoam. Technically, th 0 id and pblyether typ an' 1al objective of 55. CHICAGO, MILWAUKEE, ST. PAUL & PACIFIC (29 cut' sual first-half deficit -afteJ; preferred dividends very sharply. –T . d,- . st-all-grain–beit' carriers,re- its earnings in the t elve months ended June 30th, 1959 the road shows earnings of 28 mpetently managed and has some very interesting merger originally recommended at 26, has a teqhnical projecti reached just by . fi1! . .i . termediate term. Such an objective could be and earning power. Merger developments could result in a price Ie uc' er than that over the longer term. NATIONAL DISTILLERS (321/ i ased earmngs to 1.05 from a 1958 six-month figure of The dividend was i ased from quarterly to quarterly. Recommended at 27, the stock still qualifies for purchase on the basis of improved earnings for its rapidly growing chemical division as well as the distilling division and the stock's excellent long,term technical pattern. NEWPORT NEWS SHIPBUILDING (42 1/8) also showed an excellent six-month report with 2.93 earned as against 1. 33 in 1958. Billings carried over from last year may have resulted in somewhat higher earnings than anti- cipated. This issue is selling below my original recommendation at 47, but the longer term favorable outlook indicates purchase for the patient long term holder. PENNSALT CHEMICAL (33) has not yet issued its official report, but the president indicated earn- ings will be 50 above the 1958 level. Originally suggested at 23 7/8 (on a 3-for-1 split basis) I this stock merits abuy-hold rating. It has PFobably the best long term techn, ical pattern m the chemical group. RAYONIER (27 1/2) showed a sharp increase in first-half results when it reported 1. 20 against in 1958. Recommended at 19, this issue reached its first objective of 30 at the recent h1gh. Would still hold as the stock has a higher long term potential. AMERICAN CAN (45 1/4) and PHILIP MORRIS (59 1,/4) both showed modest increases in earnings. These two issues recommended at 42 and 48, respectively, have done little marketwise for quite some time. They are both good yielding investment issues and can be held on that basis. However, for better six-month or longer capital appreciation, the two issues recommended last week, AMERICAN VISCOSE (53 5/8) and CONSOLIDATION COAL (39 1/8) appear more attract- ive technically and would suggest a switch. MAGNAVOX (66 3/4) indicates they will recommend a 2-for-1 spilt shortly. This stock, recommended at 40, shll merits a hold. Technics pot9ptiaJ is 85 folJoU''ic' by 110 T'l'w&,w!rWlflj.ej.,lS1Ult,.IQud.l.LIlUtl'flt l W he construed nil, nn offer to or fl herem The mformabon .I.t!It'i'lneGll\elJm n… 6061QctenesB and the fUrnlBhlng thereof IS Itl\Et comtrued as, a repreS(.ntn- i3Pll'Jc….. An c),.ltr!fllltOnrnX' oPinion ntC' gubJcct to chnng(' without 4 'C6J.,'1ITIli Stockholders and nnd.fllnltJJt\1Jnn mterest In the BeCUrities mentIOned herein ThiS market letter IS mtended and presented merely as II. general. wformnl commentary on duy to day market news and not ns n complete nnnlysl' Aild!tLonnl InformutlOn With leSpeCt to nny secUilhes ref(.rred to herein Will be fur01shed upon r e q u e s t ' \\.N 301