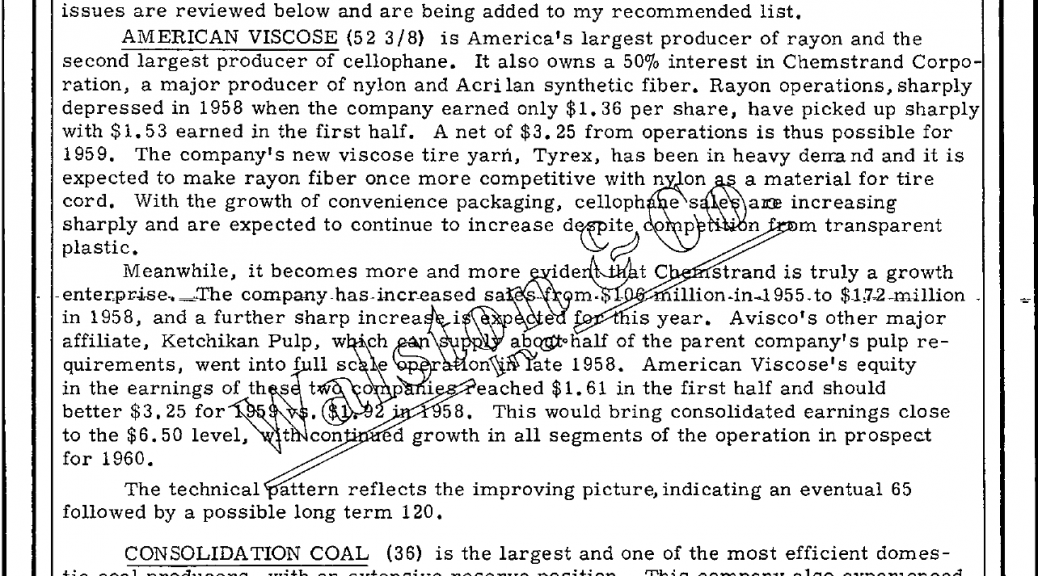 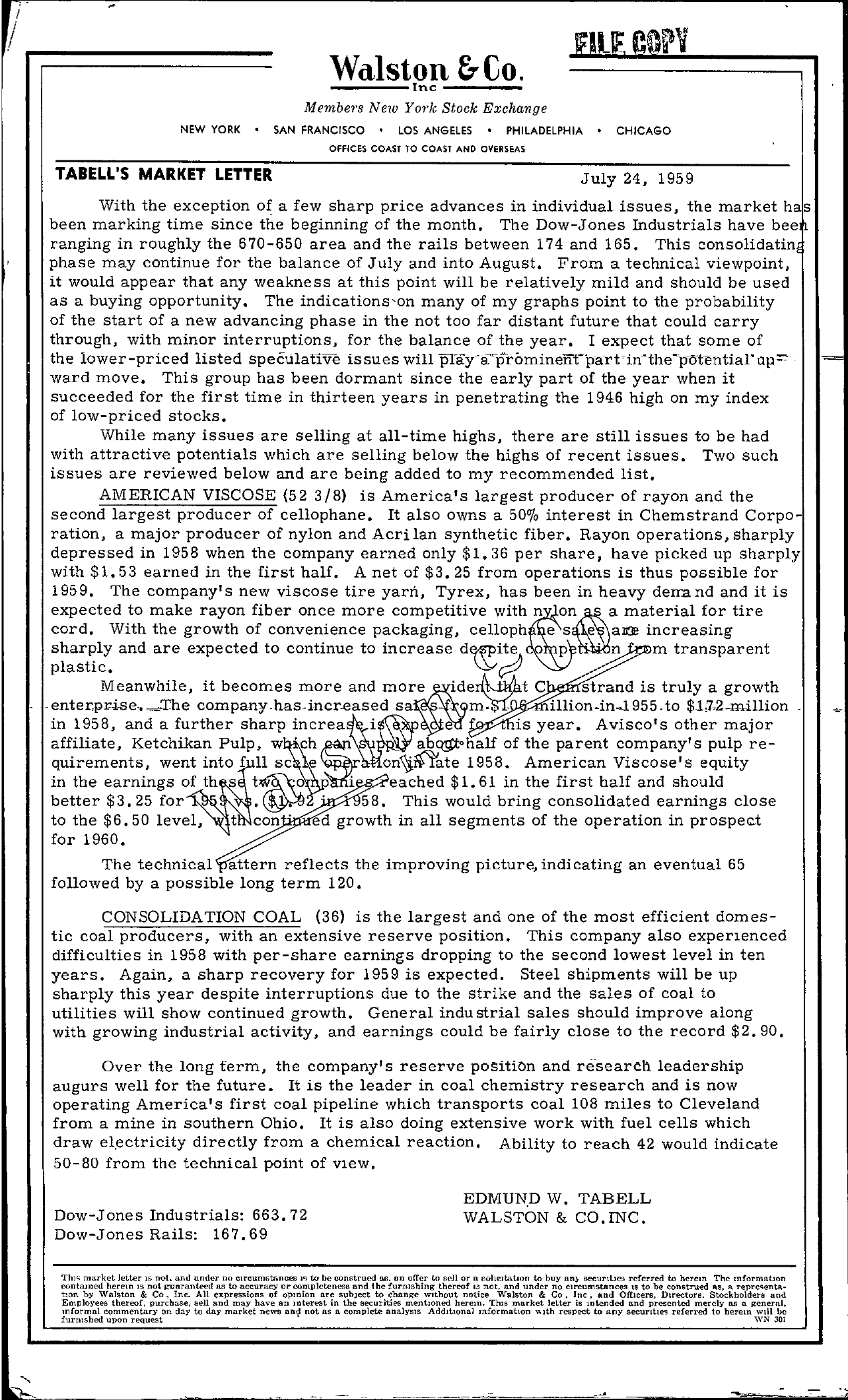 I 1—– Wdlston &- CO. Inc Member's New YOj'k Stock Exchange NEW YORK SAN FRANCISCO LOS ANGELES PHILADELPHIA CHICAGO OFFICES COAST TO COAST AND OVERSEAS TABEll'S MARKET lETTER July 24, 1959 With the exception of a few sharp price advances in individual issues, the market h s been marking time since the beginning of the month. The Dow-Jones Industrials have bee ranging in roughly the 670-650 area and the rails between 174 and 165. This consolidatin phase may continue for the balance of July and into August. From a technical viewpoint, it would appear that any weakness at this paint will be relatively mild and should be used as a buying opportunity. The indications'on many of my graphs paint to the probability of the start of a new advancing phase in the not too far distant future that could carry through, with minor interruptions, for the balance of the year. I expect that some of the lower-priced listed speculatIve issues will ward move. This group has been dormant since the early part of the year when it succeeded for the first time in thirteen years in penetrating the 1946 high on my index of low-priced stocks. While many issues are selling at all-time highs, there are still issues to be had with attractive potentials which are selling below the highs of recent issues. Two such issues are reviewed below and are being added to my recommended list. AMERICAN VISCOSE (52 3/8) is America's largest producer of rayon and the second largest producer of cellophane. It also owns a 50 interest in Chemstrand Corpo- ration, a major producer of nylon and Acrilan synthetic fiber. Rayon operations, sharply depressed in 1958 when the company earned only 1. 36 per share, have picked up sharply with 1.53 earned in the first half. A net of 3. 25 from operations is thus possible for 1959. The company's new viscose tire yarn, Tyrex, has been in heavy derrand and it is expected to make rayon fiber once more competitive material for tire cord. With the growth of convenience packaging, celloph e s e all3e increasing sharply and are expected to continue to increase plastic. \.Yv p' 'n m transparent Meanwhile, it becomes more and C strand is truly a growth -enter,prise.. The company.has-incr.eased sa . ms-rJU . illion-in-1955. to 1.7.2..m.illion in 1958, and a further sharp e is year. Avisco's other major affiliate, Ketchikan Pulp, quirements, went into f 11 sc e abQ!ttohalf of the parent company's pulp re1958. American Viscose's equity in the earnings of th s i eached 1. 61 in the first half and should better 3.25 for 58. This would bring consolidated earnings close to the 6.50 level, con' ed growth in all segments of the operation in prospect for 1960. The technical attern reflects the improving picture, indicating an eventual 65 followed by a possible long term 120. CONSOLIDATION COAL (36) is the largest and one of the most efficient domestic coal producers, with an extensive reserve position. This company also experlenced difficulties in 1958 with per-share earnings dropping to the second lowest level in ten years. Again, a sharp recovery for 1959 is expected. Steel shipments will be up sharply this year despite interruptions due to the strike and the sales of coal to utilities will show continued growth. General indu strial sales should improve along with growing industrial activity, and earnings could be fairly close to the record 2.90. Over the long ferm, the company's reserve pOSition and research leadership augurs well for the future. It is the leader in coal chemistry research and is now operating America's first coal pipeline which transports coal 108 miles to Cleveland from a mine in southern Ohio. It is also doing extensive work with fuel cells which draw el,ectricity directly from a chemical reaction. Ability to reach 42 would indicate 50-80 from the technical pOint of Vlew. Dow-Jones Industrials 663.72 Dow-Jones Rails 167.69 EDMUN,D W. TABELL WALSTON & CO. INC. Thll market letter 15 not. and under no circumstances 11 to be construed as, an offer to sell or n sohCltation to buy an\- SecUritIes referred to herem The information contamed herem IS not Inlaranteed as to accuracy or completeness and the furmshing thereof IS not, and under no circumstances IS to be construed as, n. reprc;enta hon by \Valston & Co. Inc. All expressions of opmion are subject to change Without notice V;'alston & Co, Inc, and Officers, Directors. Stockholders and thereof, purchase, sell and may have an mterest in the securities menboned herem. ThiS market letter is mtended and presented merely ns a general, mformal commentary on day to day market news and not as a complete analYSIS Additional mformatlOn Volth respect to any securlbe! referred to herem Will be furmshed upon r e q u e s t ' \\,N 301