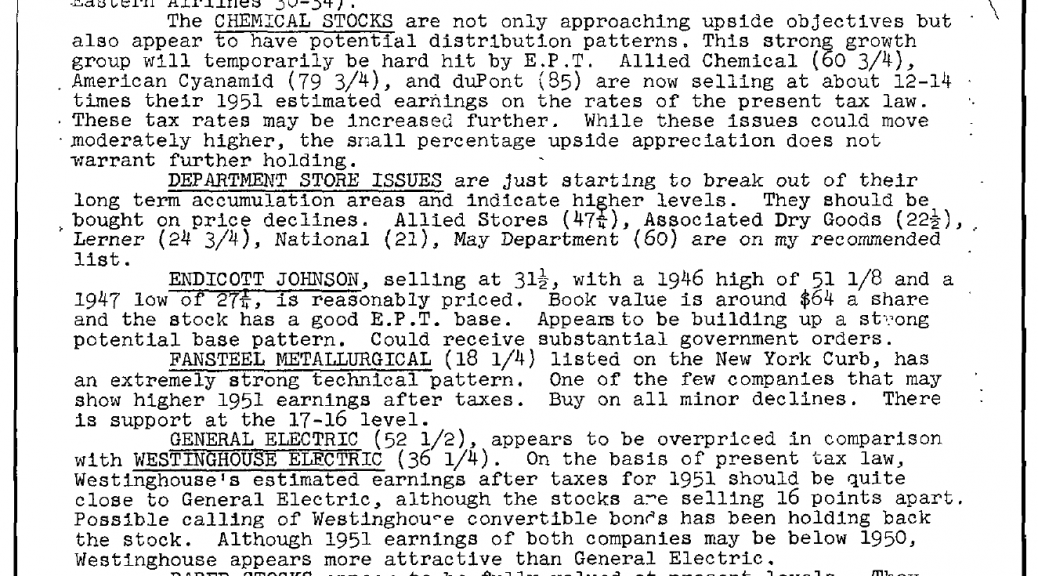 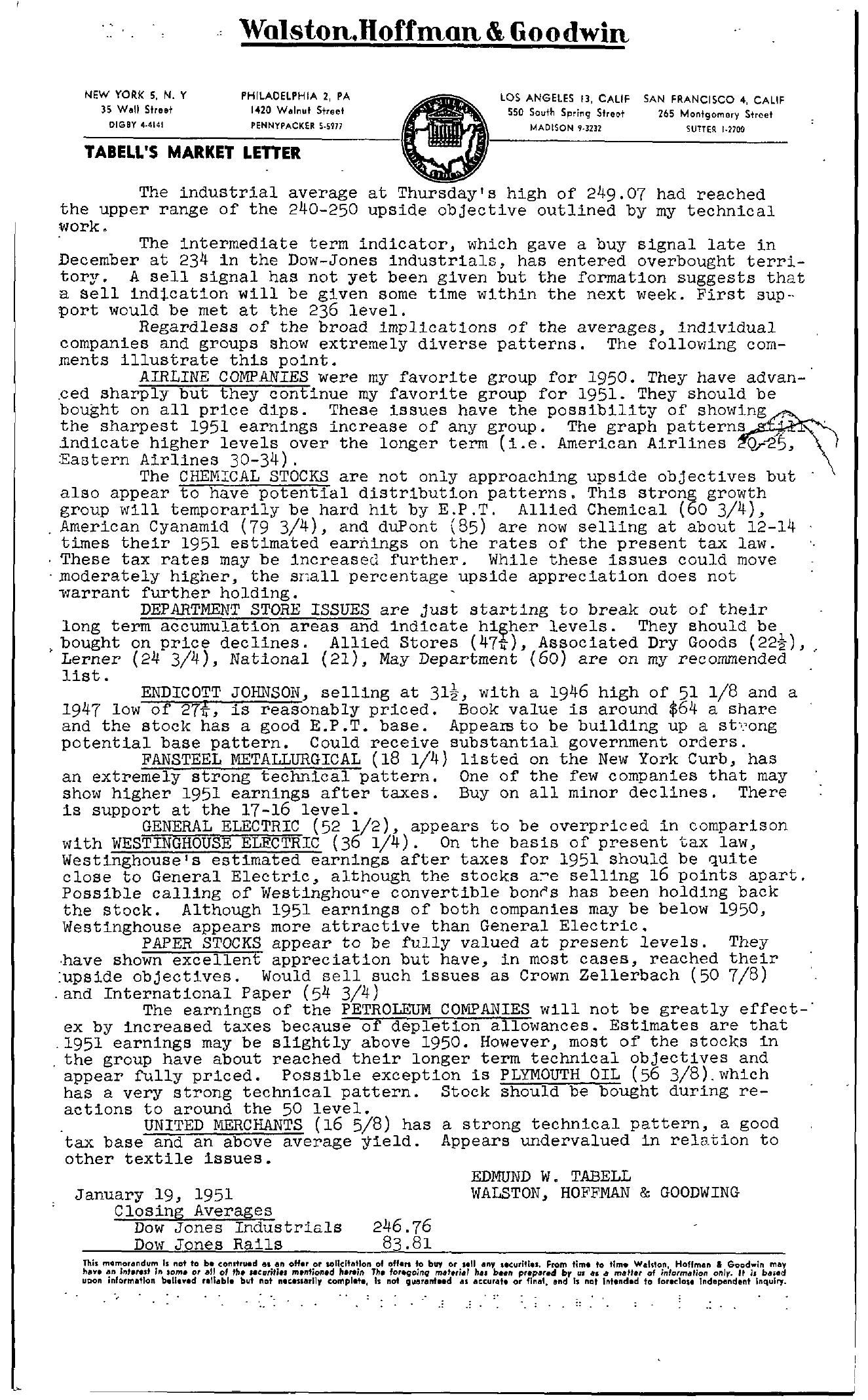 Walston.Hoffman &, Goodwin NEW YORK 5. N. Y 35 Wall Street DIGBY 44141 PHILADELPHIA 2. PA 1420 Walnut Street PENNYPACKER 55917 TABELL'S MARKET LEnER LOS ANGELES 13. CALIF 550 South Spring StrMt MADISON '13232 SAN FRANCISCO 4. CALIF 265 Montgomery Street SUTTER 1-2700 The industrial average at Thursday's high of 249.07 had reached the upper range of the 240-2S0 upside objective outlined by my technical work. The intermediate term indicator, which gave a buy signal late in December at 234 in the Dow-Jones industrials, has entered overbought terri- tory. A sell signal has not yet been given but the formation suggests that a sell indication will be given some time within the next week. First sup ort would be met at the 236 level. Regardless of the broad implications of the averages, individual companies and groups show extremely diverse patterns. The following com- ments illustrate this pOint. AIRLINE COMPANIES were my favorite group for 1950. They have advan- ed sharply but they continue my favorite group for 19S1. They should be bought on all price dips. These issues have the possibility of ShOW.'ng the sharpest 19S1 earnings increase of any group. The graph patterns J indicate higher levels over the longer term (i.e. American Airlines Qr5, Eastern Airlines 30-34). The CHEMICAL STOCKS are not only approaching upside objectives but . also appear to have potential distribution patterns. This strong growth group will temporarily be hard hit by E.P.T. Allied Chemical (60 3/4), American Cyanamid (79 3/4), and duPont (8S) are now selling at about 12-14 times their 19S1 estimated earnings on the rates of the present tax law. These tax rates may be increased further. While these issues could move moderately higher, the snaIl percentage upside appreciation does not warrant further holding. DEPARTMENT STORE ISSUES are just starting to break out of their long term accumulation areas and indicate hiher levels. They should be bought on price declines. Allied Stores (474)' Associated Dry Goods (22), Lerner (24 3/4), National (21), May Department (60) are on my recommended list. ENDICOTT JOHNSON, selling at 31, with a 1946 high of Sl 1/8 and a 1947 low of 27C, is reasonably priced. Book value is around 64 a share and the stock has a good E.P.T. base. Appeare to be building up a st'.'ong potential base pattern. Could receive substantial government orders. FANSTEEL METALLURGICAL (18 1/4) listed on the New York Curb, has an extremely strong technical pattern. One of the few companies that may show higher 1951 earnings after taxes. Buy on all minor declines. There is support at the 17-16 level. GENERAL ELECTRIC (S2 1/2), appears to be overpriced in comparison with WESTINGHOUSE ELECTRIC (36 1/4). On the basis of present tax law, Westinghouse's estimated earnings after taxes for 1951 should be quite close to General ElectriC, although the stocks ae selling 16 pOints apart. Possible calling of Westinghoue convertible bonrs has been holding back the stock. Although 19S1 earnings of both companies may be below 19S0, Westinghouse appears more attractive than General Electric. PAPER STOCKS appear to be fully valued at present levels. They have shown excellent appreciation but have, in most cases, reached their upside objectives. Would sell such issues as Crown Zellerbach (SO 7/8) . and International Paper (54 3/4) The earnings of the PETROLEUM COMPANIES will not be greatly effect-' ex by increased taxes because of depletion allowances. Estimates are that .19S1 earnings may be slightly above 19S0. However, most of the stocks in the group have about reached their longer term technical objectives and appear fully priced. Possible exception is PLYMOUTH OIL (56 3/8). which has a very strong technical pattern. Stock should be bought during re- actions to around the 50 level. . UNITED MERCHANTS (16 S/8) has a strong technical pattern, a good tax base and an above average yield. Appears undervalued in relation to other textile issues. EDMUND W. TABELL January 19, 1951 WALSTON, HOFFMAN & GOODWING Closing Averages Dow Jones IndustrialS 246.76 Dow Jones Rails 83.81 ,,,,.,..fThis haY. m.morudum Is not lin in 10m. to or b. all conltrued 1 an 0' ft',. MClll'm., oHef or sol1c1tllltlon of mentioed h.,.; The offOfIe',. ttNonqburyMot.rti.1 11haII.nybuncurPltn.p..tFromby tim. U to ,a time Waldon Hoffman maat of ;otm.aflon & GoodIn may only. It I. ba,ed unon inl!)rmat'on b.II,v.d unabl. but not nlc.uarlly complete, Is not 'i!lliIrarrleld as accurt. or final, and Is not Intendld to forlclo,. Indopendent inqul,..,.