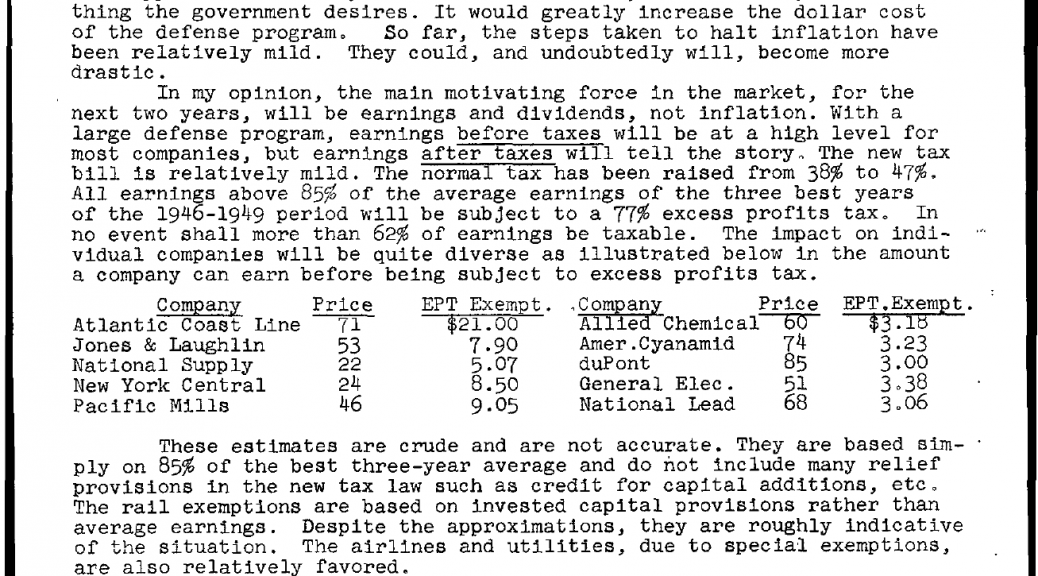 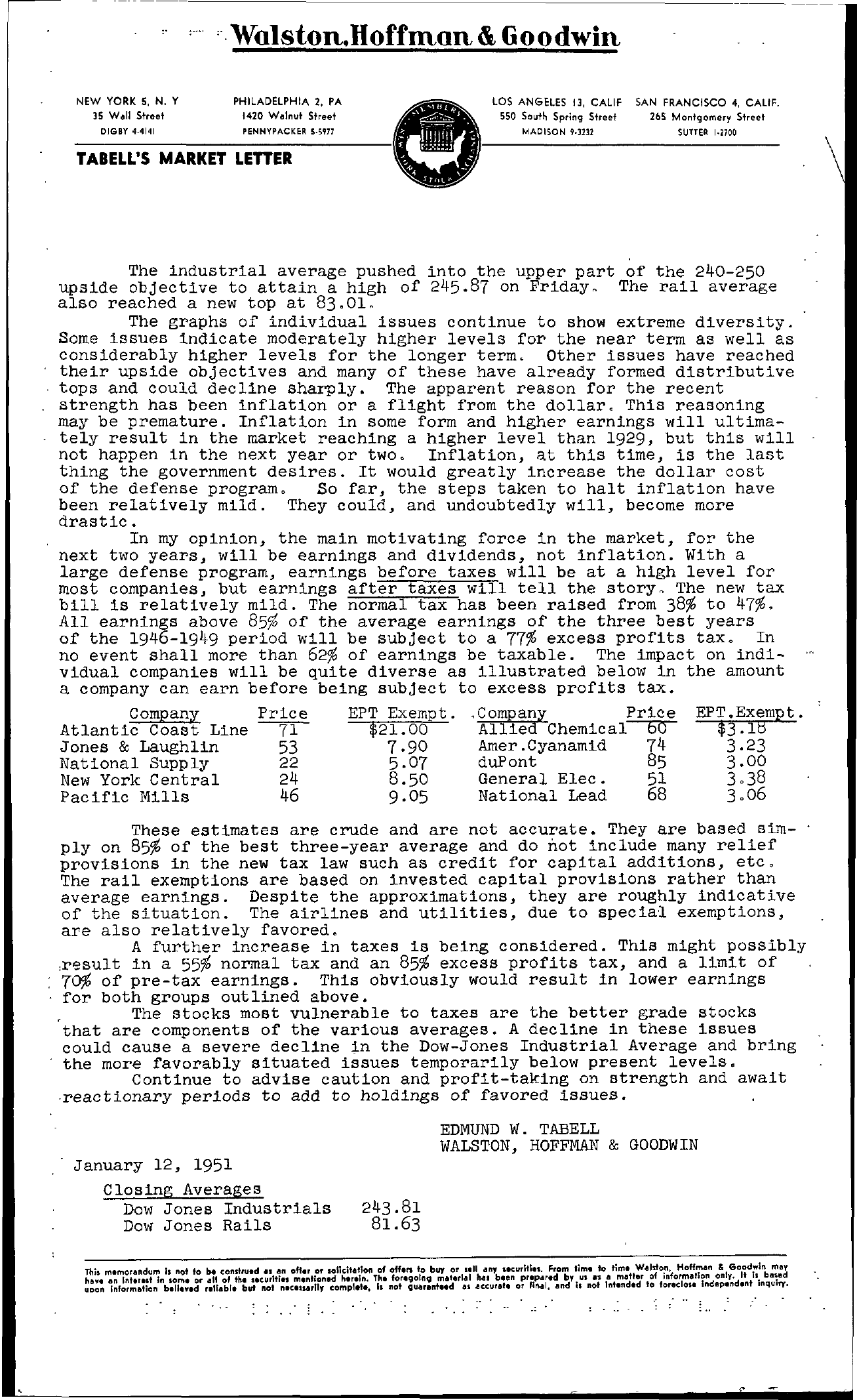 ———————————————————————- . Wolston.Hoffrn,on &, Goodwin NEW YORK 5, N. Y 35 Wall Street DIGBY 4-4141 PHILADELPHIA 2, PA 1420 Walnut Street PENNYPACKER SS'i'77 TABELL'S MARKET LETTER LOS ANGELES I J, CALIF 550 South Spring Street tv! AD ISO N 93232 SAN FRANCISCO 4, CALIF. 2bS Montgomery Street SUTTER 12700 \ The industrial average pushed into the upper part of the 240-250 upside objective to attain a high of 245.87 on Fridayo The rail average also reached a new top at 83.01.. The graphs of individual issues continue to show extreme diversity. Some issues indicate moderately higher levels for the near term as well as considerably higher levels for the longer term. Other issues have reached their upside objectives and many of these have already formed distributive tops and could decline sharply. The apparent reason for the recent strength has been inflation or a flight from the dollar. This reasoning may be premature. Inflation in some form and higher earnings will ultimately result in the market reaching a higher level than 1929, but this will not happen in the next year or two. Inflation, at this time, is the last thing the government desires. It would greatly increase the dollar cost of the defense program. So far, the steps taken to halt inflation have been relatively mild. They could, and undoubtedly will, become more drastiC. In my opinion, the main motivating force in the market, for the next two years, will be earnings and dividends, not inflation. With a large defense program, earnings before taxes will be at a high level for most companies, but earnings after taxes will tell the storyo The new tax bill is relatively mild. The normal tax has been raised from 38 to 47. All earnings above 85 of the average earnings of the three best years of the 1946-1949 period will be subject to a 77 excess profits tax. In no event shall more than 62 of earnings be taxable. The impact on individual companies will be quite diverse as illustrated below in the amount a company can earn before being subject to excess profits tax. Company Price Atlantic Coast Line 71 Jones & Laughlin 53 National Supply 22 New York Central 24 Pacific Mills 46 EPT Exempt . . Company Price 21.00 AllieChemical 60 7.90 Amer.Cyanamid 74 5.07 duPont 85 8.50 General Elec. 51 9.05 National Lead 68 EPT.Exempt. 3.18 3.23 3.00 3.38 3.06 These estimates are crude and are not accurate. They are based sim- ply on 85 of the best three-year average and do not include many relief provisions in the new tax law such as credit for capital additions, etc. The rail exemptions are based on invested capital provisions rather than average earnings. Despite the approximations, they are roughly indicative of the situation. The airlines and utilities, due to special exemptions, are also relatively favored. A further increase in taxes is being conSidered. This might possibly ,7r0esuoltf in a 55 normal tax and pre-tax earnings. This an 85 excess profits tax, and a limit of obviously would result in lower earnings for both groups outlined above. The stocks most vulnerable to taxes are the better grade stocks that are components of the various averages. A decline in these issues could cause a severe decline in the Dow-Jones Industrial Average and bring the more favorably situated issues temporarily below present levels. Continue to advise caution and profit-taking on strength and await reactionary periods to add to holdings of favored issues. January 12, 1951 Closing Averages Dow Jones Industrials Dow Jones Rails EDMUND W. TABELL WALSTON, HOFFMAN & GOODWIN 243.81 81.63 Thi! memorandum Is not hi an Int.r.st In some to or bt all constru.d an offer Of' lollcltatlon of of tile securities mentioned h.r.ln. The offers to bur or ,en any ,kurlll. From tim. to time Waldo,, Hoffman foregolnq mate,lal hat bn prepared by us IS II matter of Information o&nlYG'dolotdwIsinbameady ueon Information b.lleyed reUable but not neussartl, complete, Is not QUarentMd al .accurate or final, lind Is not Intended to foredo,. Indepen ent inqUiry,