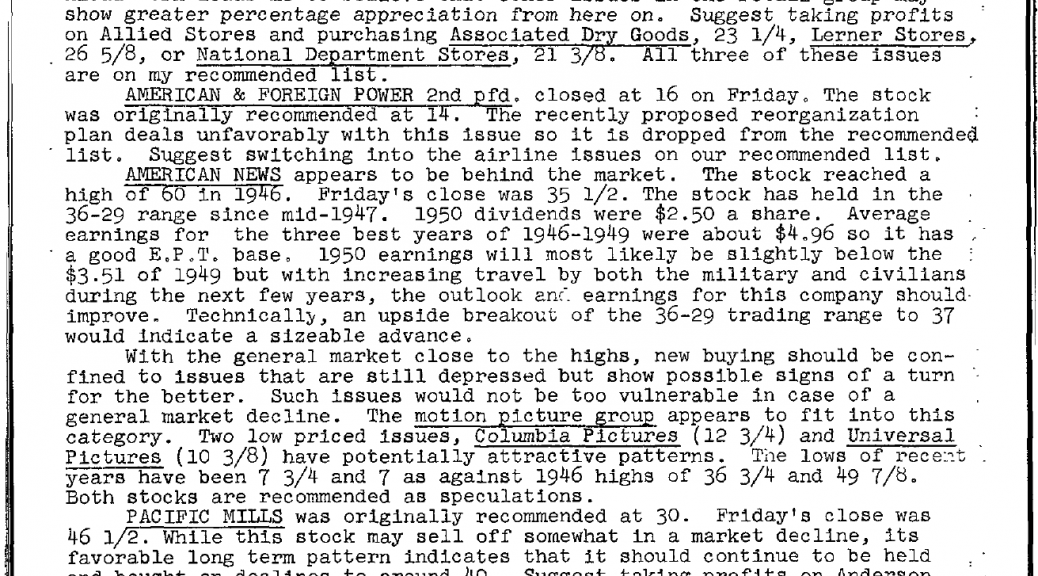 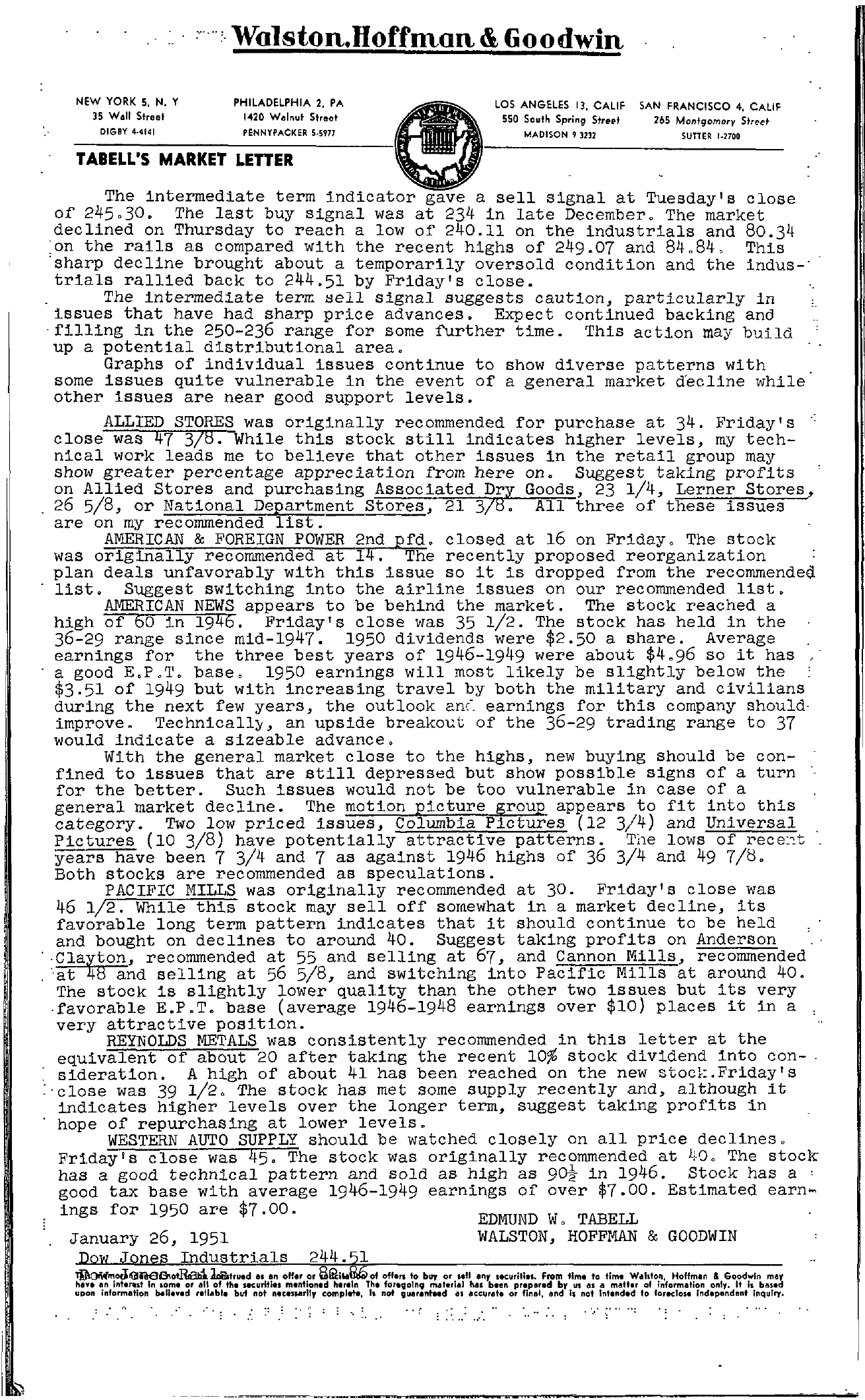 . ,. , Walston.Hoffmon &Goodwin NEW YORK 5. N. Y 35 Wall Streot DIGBY 4-4141 PHILADELPHIA 2. PA '..20 Walnut Street PENNYPACKER 5,5977 TABELL'S MARKET LEnER LOS ANGELES 13. CALIF 550 South Spring Strsl't MADISON 9 3232 SAN FRANCISCO 4. CALIF 265 Montgomery Street SUnER 1-2700 The intermediate term indicator gave a sell signal at Tuesday's close of 245.30. The last buy Signal was at 234 in late December. The market declined on Thursday to reach a low of 240.11 on the industrials and 80.34 on the rails as compared with the recent highs of 249.07 and 84.84. This 'sharp decline brought about a temporarily oversold condition and the indus-' ' trials rallied back to 244.51 by Friday's close. The intermediate terrr. sell Signal suggests caution, particularly in issues that have had sharp price advances. Expect continued backing and 'filling in the 250-236 range for some further time. This action may bUild up a potential distributional area. Graphs of individual issues continue to show diverse patterns with some issues quite vulnerable in the event of a general market aecline while other issues are near good support levels. ALLIED STORES was originally recommended for purchase at 34. Friday's close was 47 3/8. While this stock still indicates higher levels, my tech- nical work leads me to believe that other issues in the retail group may show greater percentage appreciation from here on. Suggest taking profits on Allied Stores and purchasing Associated Dry Goods, 23 1/4, Lerner Stores, 26 5/8, or National Department Stores, 21 3/8. All three of these issues are on my recommended list. AMERICAN & FOREIGN POWER 2nd pfd. closed at 16 on Friday. The stock was originally recommended at 14. The recently proposed reorganization plan deals unfavorably with this issue so it is dropped from the recommended list. Suggest switching into the airline issues on our recommended list. AMERICAN NEWS appears to be behind the market. The stock reached a high of 60 in 1946. Friday's close was 35 1/2. The stock has held in the 36-29 range since mid-1947. 1950 dividends were 2.50 a share. Average earnings for the three best years of 1946-1949 were about 4.96 so it has a good E.P.T. base. 1950 earnings will most likely be slightly below the 3.51 of 1949 but with increasing travel by both the military and civilians during the next few years, the outlook anc. earnings for this company should, improve. Technicall, an upside breakout of the 36-29 trading range to 37 would indicate a sizeable advance. With the general market close to the highs, new buying Should be con- fined to issues that are still depressed but show possible Signs of a turn for the better. Such issues would not be too vulnerable in case of a general market decline. The motion picture group appears to fit into this category. Two low priced issues, Columbia Pictures (12 3/4) and Universal Pictures (10 3/8) have potentially attractive patterns. Tile lows of rece,t years have been 7 3/4 and 7 as against 1946 highs of 36 3/4 and 49 7/e. Both stocks are recommended as speculations. PACIFIC MILLS was originally recommended at 30. Friday's close was 46 1/2. While this stock may sell off somewhat in a market decline, its favorable long term pattern indicates that it should continue to be held and bought on declines to around 40. Suggest taking profits on Anderson Claton, recommended at 55 and selling at 67, and Cannon Mills, recommended ,at 8 and selling at 56 5/8, and switching into Pacific Mills at around 40. The stock is slightly lower quality than the other two issues but its very ,favorable E.P.T. base (average 1946-1948 earnings over 10) places it in a , very attractive position. REYNOLDS METALS was conSistently recommended in this letter at the equivalent of about 20 after taking the recent 10 stock dividend into con- , sideration. A high of about 41 has been reached on the new stock.Friday's 'close was 39 1/2. The stock has met some supply recently and, although it indicates higher levels over the longer term, suggest taking profits in hope of repurchasing at lower levels. WESTERN AUTO SUPPLY should be watched closely on all price declines. Friday's close was 45. The stock was originally recommended at 40. The stock has a good technical pattern and sold as high as 90 in 1946. Stock has a ' good tax base with average 1946-1949 earnings of over 7.00. Estimated earn ings for 1950 are 7.00. EDMUND W. TABELL January 26, 1951 WALSTON, HOFFMAN & GOODWIN ,', ,,-, ,;' ;