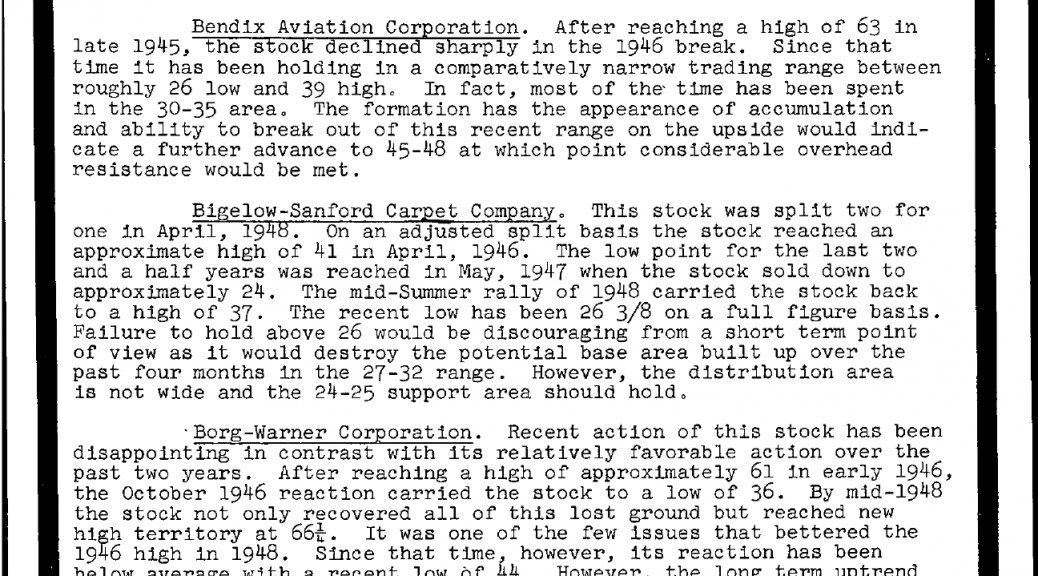 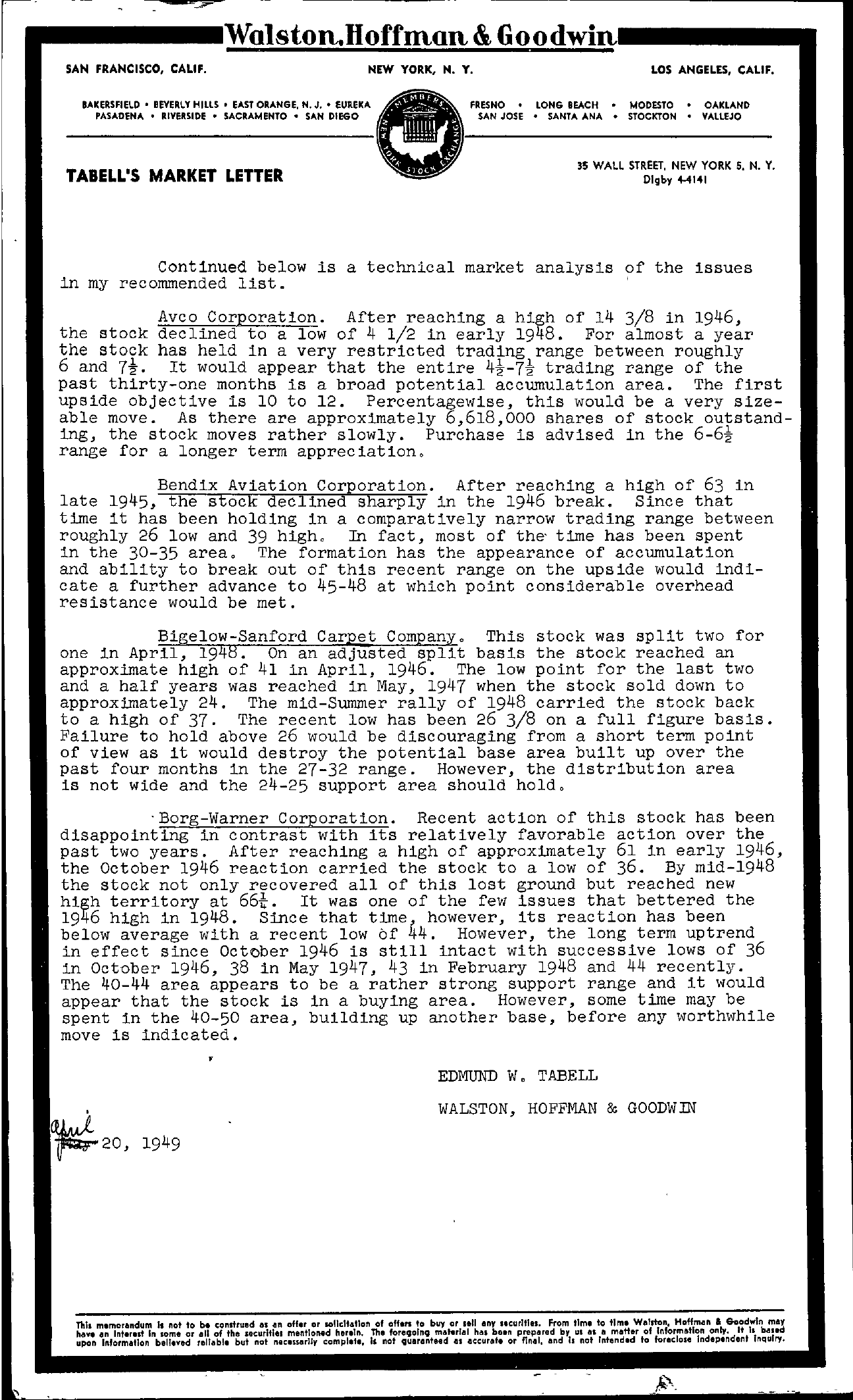 TABELL'S MARKET LETTER 35 WALL STREET. NEW YORK 5. N. Y. Digby 4-4141 Continued below is a technical market analysis of the issues in my recommended list. Avco Corporation. After reaching a high of 14 3/8 in 1946, the stock declined to a low of 4 1/2 in early 1948. For almost a year the stock has held in a very restricted trading range between roughly 6 and 7t. It would appear that the entire 4t-7t trading range of the past thirty-one months is a broad potential accumulation area. The first upside objective is 10 to 12. Percentagewise, this would be a very sizeable move. As there are approximately 6,618,000 shares of stock outstanding, the stock moves rather slowly. Purchase is advised in the 6-6t range for a longer term appreciation. Bendix Aviation Corporation. After reaching a high of 63 in late 1945, the stock declined sharply in the 1946 break. Since that time it has been holding in a comparatively narrow trading range between roughly 26 low and 39 higho In fact, most of the- time has been spent in the 30-35 area. The formation has the appearance of accumulation and ability to break out of this recent range on the upside would indicate a further advance to 45-48 at which point considerable overhead resistance would be met. Bigelow-Sanford Carpet Companyo This stock was split two for one in April, 1948. On an adjusted split basis the stock reached an approximate high of 41 in April, 1946. The low point for the last two and a half years was reached in May, 1947 when the stock sold down to approximately 24. The mid-Summer rally of 1948 carried the stock back to a high of 37. The recent low has been 26 3/8 on a full figure basis. Failure to hold above 26 would be discouraging from a short term point of view as it would destroy the potential base area built up over the past four months in the 27-32 range. However, the distribution area is not wide and the 24-25 support area should hold. 'Borg-Warner Corporation. Recent action of this stock has been disappointing in contrast with its relatively favorable action over the past two years. After reaching a high of approximately 61 in early 1946, the October 1946 reaction carried the stock to a low of 36. By mid-1948 the stock not only recovered all of this lost ground but reached new high territory at 66. It was one of the few issues that bettered the 1946 high in 1948. Since that time, however, its reaction has been below average with a recent low bf 44. However, the long term uptrend in effect since October 1946 is still intact with successive lows of 36 in October 1946, 38 in May 1947, 43 in February 1948 and 44 recently. The 40-44 area appears to be a rather strong support range and it would appear that the stock is in a buying area. However, some time may be spent in the 40-50 area, building up another base, before any worthwhile move is indicated EDMUND W. TABELL WALSTON, HOFFMAN & GOODWIN Thll memorandum I. not to b. construed al an off.r or solicitation of offen to buy or ,all IIny .ecurltles. From tim. to tim. Walston, Hoffm.an & &Godwin may ha…. an Int.r.st In lome or all of the securltlel mentioned her.ln. The fore901,,; ma..rlal has been prepared by us a, III matter of Information only. It Is bas.d upon In'ormatlon bell.yod rellabl. but not necessarlly complete, Is not qUllranteed as accurat. or final, and Is not Intended to foreclose Independent inquIry. ,