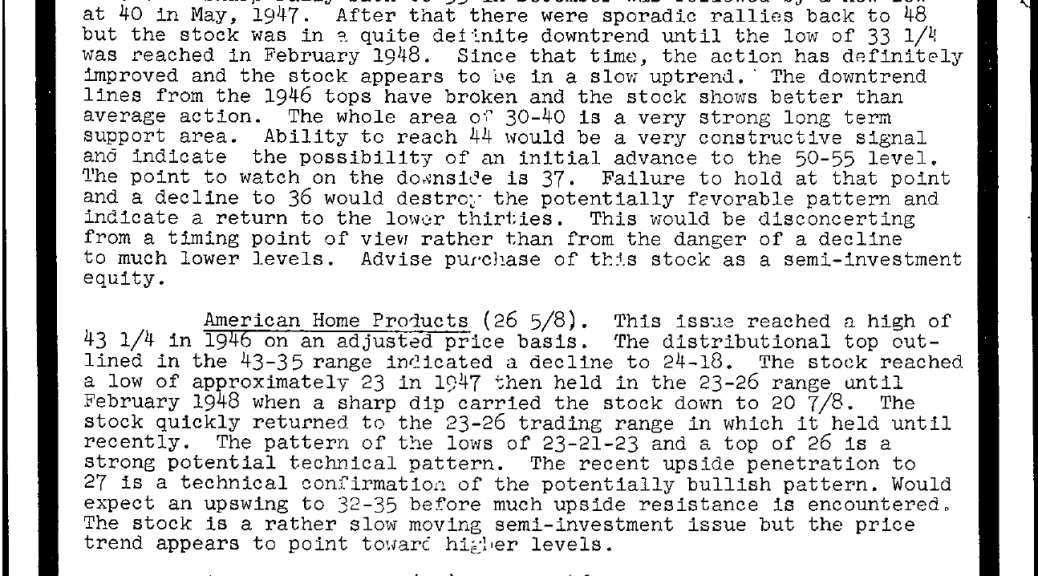 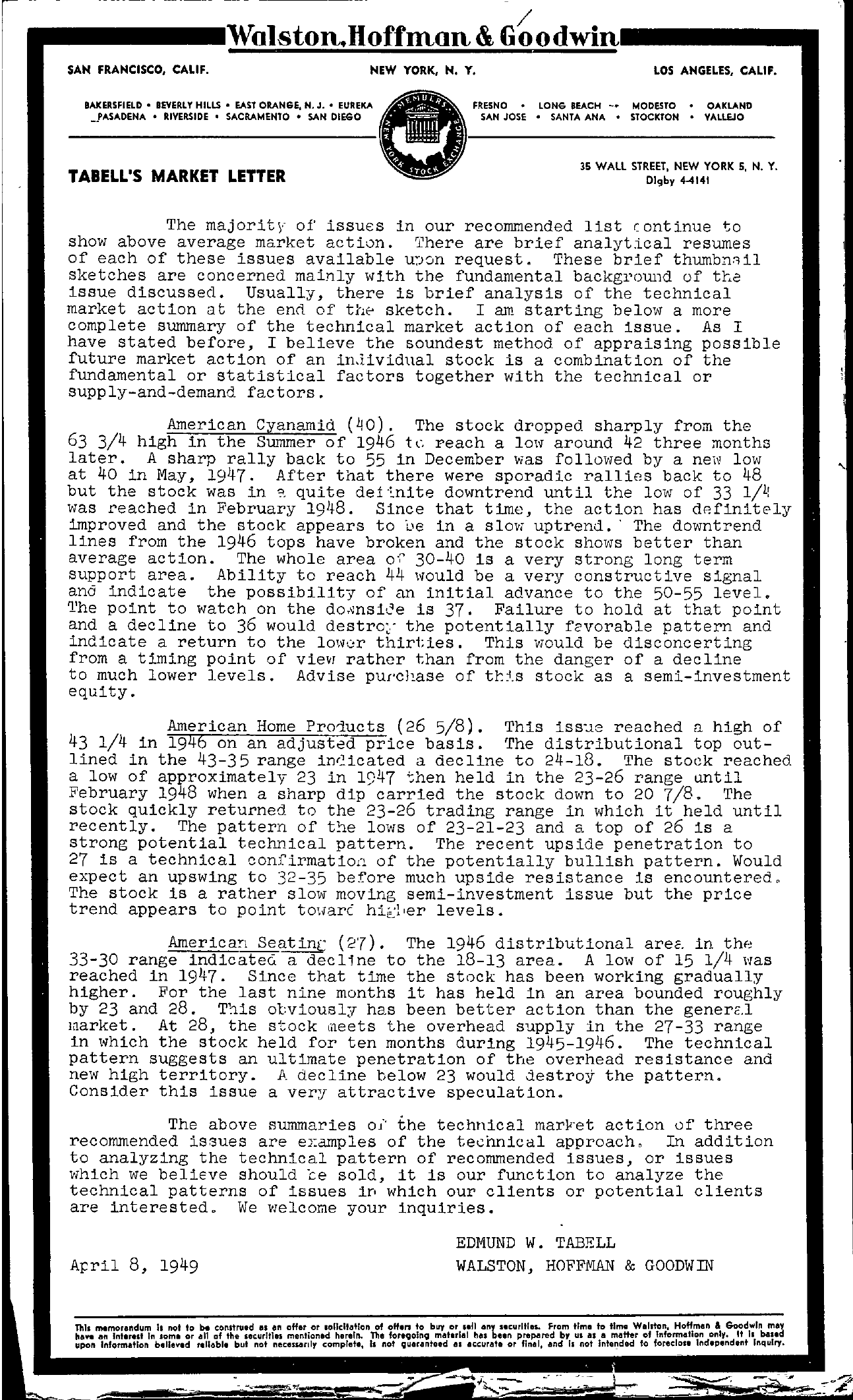 SAN FRANCISCO, CALIF. NEW YORK, N. Y. LOS ANGELES, CALIF. BAKERSFIELD. BEVERLY HILLS. EAST ORANGE, N. J. EUREKA .PASADENA RIVERSIDE SACRAMENTO SAN DIEGO FRESNO LONG BEACH -.. MODESTO SAN JOSE SANTA ANA STOCKTON OAKLAND VALLEJO TABELL'S MARKET LETTER 35 WALL STREET, NEW YORK 5. N. Y. Digby 4-4141 The majorit\- of' issues in our recommended list (ontinue to show above average market action. There are brief analytical resumes of each of these issues available U8n request. These brief thumbn8il sketches are concerned mainly with the fundamental background of tr-,e issue discussed. Usually, there is brief analysis of the technical market action at the enG of thE-' Sketch. I am starting below a more complete summary of the technical market action of each issue. As I have stated before, I believe the soundest method of appraising possible future market action of an in,lividual stock is a combination of the fundamental or statistical factors together with the technical or supply-and-demand factors. American Cyanamid (O). The stock dropped sharply from the 63 3/4- high in the Summer of 194-6 tc reach a low around 4-2 three months later. A sharp rally back to 55 in December was followed by a new low at 4-0 in May, 194-7. After that there were sporadic rallies back to 4-8 but the stock was in . quite dei'.nite downtrend until the low of 33 1/) was reached in February 194-8. Since that time, the action has dp-finitely improved and the stock appears to 'LlE in a slov; uptrend. The downtrend lines from the 194-6 tops have broken and the stock shows better than average action. The whole area or 30-4-0 is a very strong long term support area. Ability to reach 4-4- would be a very constructive signal ana indicate the possibility of an initial advance to the 50-55 level. 'l'he point to watch on the do,msiee is 37. Failure to hold at that point and a decline to 36 would destro,' the potentially f2vorable pattern and indicate a return to the lowcr thirties. This would be disconcerting from a timing point of vievr rather than from the danger of a decline to much lower levels. Advise pUf'c),ase of tts stock as a semi-investment equity. American Home Proucts (26 5/8). This isse reached a high of 4-3 1/4- in 1946 on an adjusted price basis. The distributional top outlined in the 4-3-35 range inr2icated a decline to 24–18. The stock reached a low of approximately 23 in 147 hen held in the 23-26 range until February 194-8 when a sharp dip carried the stock down to 20 7/8. The stock quickly returned to the 23-26 trading range in which it held until recently. The pattern of te lows of 23-21-23 and a top of 26 is a strong potential technical pattern. The recent upside penetration to 27 is a technical confirmatiol of the potentially bullish pattern. Would expect an upswing to 32-35 before much upside reSistance is encountered. The stock is a rather slow moving semi-investment issue but the price trend appears to point tOlmrc hie.! 'er levels. America!l Seatinc (2'7). The 194-6 distributional areI'. in the 33-30 range indicateG. a decline to the 18-13 area. A low of 15 1/4- was reached in 194-7. Since that time the stock has been working gradually higher. For the last nine months it has held in an area bounded roughly by 23 and 28. T'lis obviously has been better action than the generE.l lnarket. At 28, the stock raeets the overhead supply in the 27-33 range in which the stock held for ten months during 194-5-194-6. The technical pattern suggests an ultimate penetration of the overhead resistance and new high territory. A decline below 23 would destroy the pattern. ConSider this issue a very attractive speculation. The above summaries 0'-' the technical marli-et action of three recommended issues are eJamples of the technical approach. In addition to analyzing the technical pattern of recommended issues, or issues which we believe should ce sold, it is our function to analyze the technical patterns of issues ir' which our clients or potential clients are interested. We welcome your inquiries. Al'ril 8, 194-9 EDMUND W. TABELL WALSTON, HOFFMAN & GOODWIN Thll memorandum Is not to be construed as an cffer or lollcltatlon of oHel1 to bLl)' Of n any curltl.L From tim. to tim. W.lston, Hoffman a Goodwin may heft an Int…… In tom. or all of the ,ocurltl.s mentioned herein. The fOQolnQ mat.tlal hal been pr.red by u, as a matter of Information only. It II bal.d upon Information b.II……d r.llable but not neceslardy complete, Is not Quarantoed al accurata or final, and Is not Interlded to foreclo.e Independent Inquiry.