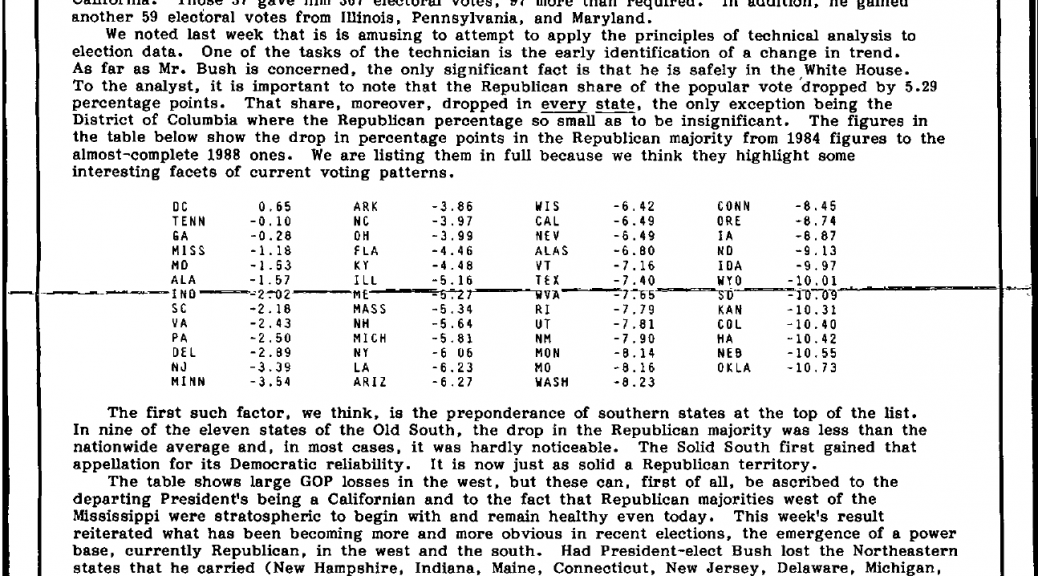 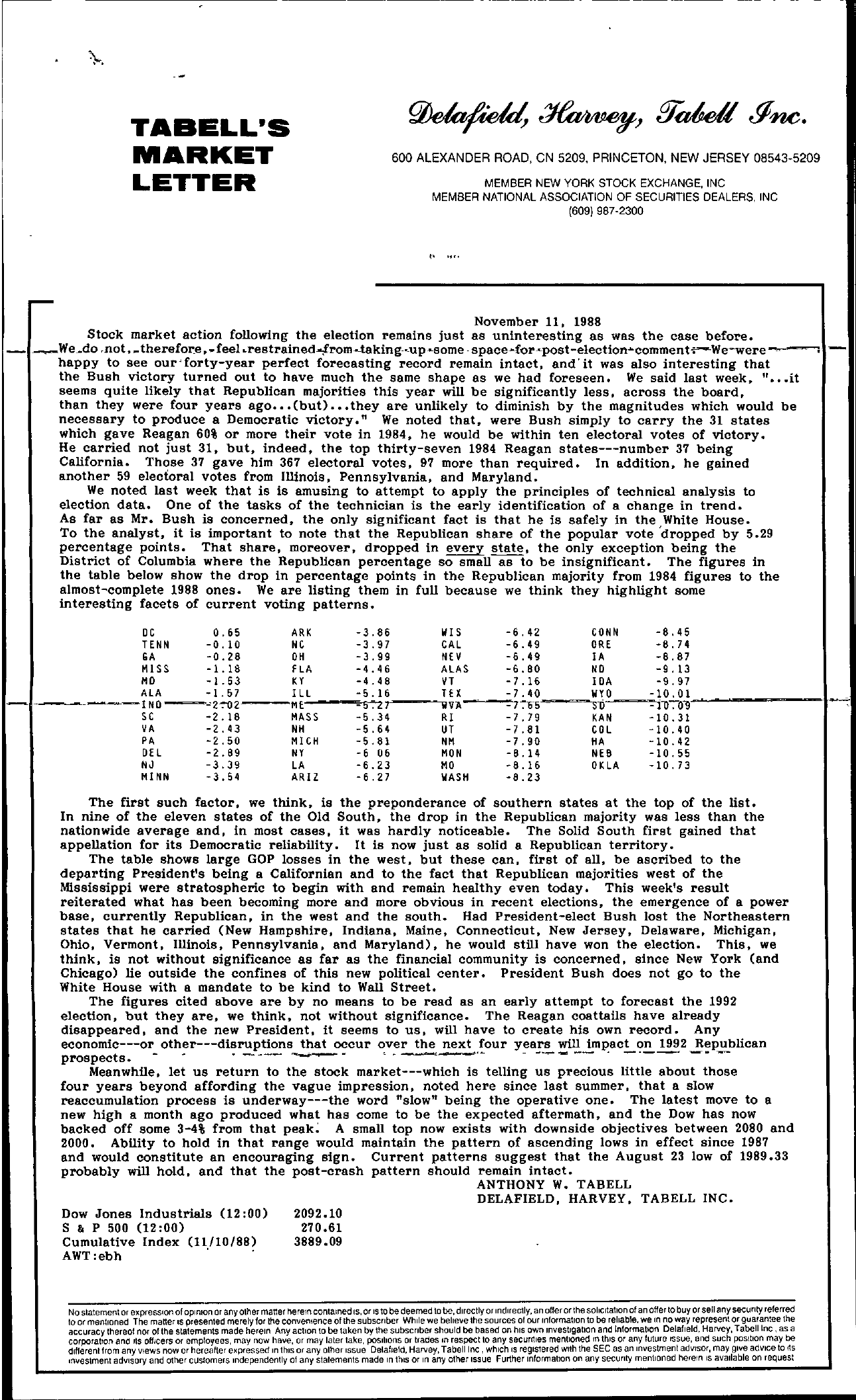 ).. TABELL'S MARKET LETTER 600 ALEXANDER ROAD. CN 5209. PRINCETON. NEW JERSEY 08543-5209 MEMBER NEW YORK STOCK EXCHANGE. INC MEMBER NATIONAL ASSOCIATION OF SECURITIES DEALERS, INC (609) 987-2300 t' …. November 11. 1988 Stock market action following the election remains just as uninteresting as was the case before. –.-We do .not. therefore …. feel L-restrained4rom-….t8king–up …Bome -8pace..o-forpost-election…. commentWe-were – – – – , happy to see Qur'forty-year perfect forecasting record remain intact, and'it was also interesting that the Bush victory turned out to have much the same shape as we had foreseen. We said last week. it seems quite likely that Republican majorities this year will be significantly less. across the board. than they were four years ago (but) they are unlikely to diminish by the magnitudes which would be necessary to produce a Democratic victory. We noted that. were Bush simply to carry the 31 states which gave Reagan 60 or more their vote in 1984. he would be within ten electoral votes of victory. He carried not just 31. but. indeed. the top thirty-seven 1984 Reagan states—number 37 being California. Those 37 gave him 367 electoral votes. 97 more than required. In addition. he gained another 59 electoral votes from Illinois. Pennsylvania. and Maryland. We noted last week that is is amusing to attempt to apply the principles of technical analysis to election data. One of the tasks of the technician is the early identification of a change in trend. As far as Mr. Bush is concerned. the only significant fact is that he is safely in the White House. To the analyst. it is important to note that the Republican share of the popular vote 'dropped by 5.29 percentage points. That share. moreover. dropped in every state. the only exception being the District of Columbia where the Republican percentage so small as to be insignificant. The figures in the table below show the drop in percentage points in the Republican majority from 1984 figures to the almost-complete 1988 ones. We are listing them in full because we think they highlight some interesting facets of current voting patterns. DC 0,65 TENN – O. 10 GA -0.28 HISS -I. IS HD -I. 53 ALA -I. 57 –IND-22 SC -2.18 VA -2.43 PA -2.50 DEL -2.89 NJ -3.39 HUN – 3.54 ARK NC OH FLA KY ILL ME MASS NH HICH NY LA ARIZ -3.86 -3.97 -3.99 – 4.46 – 4.48 -5.16 -5727 -5.34 -5.64 – 5.81 -6 06 -6.23 -6.27 WIS CAL NEV ALAS VT TEX iVA RI UT NM MON HO WASH -6,42 -6.49 -6.49 -6.80 -7.16 -7.40 – J–0-5 -7.79 -7.81 -7.90 -8.14 -8. 16 -8.23 CONN ORE IA NO IDA WYO sti KAN COL HA NEB onA -8.45 -8.74 -8.87 – 9. 13 -9.97 -10.01 -1'0'-11'9 -10.31 -10.40 -10.42 -10.55 -10.73 The first such factor. we think. is the preponderance of southern states at the top of the list. In nine of the eleven states of the Old South. the drop in the Republican majority was less than the nationwide average and. in most cases. it was hardly noticeable. The Solid South first gained that appellation for its Democratic reliability. It is now just as solid a Republican territory. The table shows large GOP losses in the west. but these can. first of all. be ascribed to the departing President's being a Californian and to the fact that Republican majorities west of the Mississippi were stratospheric to begin with and remain healthy even today. This week's result reiterated what has been becoming more and more obvious in recent elections, the emergence of a power base. currently Republican. in the west and the south. Had President-elect Bush lost the Northeastern states that he carried (New Hampshire, Indiana, Maine, Connecticut. New Jersey, Delaware, Michigan, Ohio. Vermont. Illinois. Pennsylvania. and Maryland). he would still have won the election. This. we think. is not without significance as far as the financial community is concerned. since New York (and Chicago) lie outside the confines of this new political center. President Bush does not go to the White House with a mandate to be kind to Wall Street. The figures cited above are by no means to be read as an early attempt to forecast the 1992 election. but they are. we think. not without significance. The Reagan coattails have already disappeared, and the new President I it seems to us, will have to create his own record. Any economic—or other—disruptions that occur over the next four years will impact on 1992 Republican prospects. – —- ' – '- r –'-' – — – – . . . . . – – – – – . – – .. -…- Meanwhile. let us return to the stock market—which is telling us precious little about those four years beyond affording the vague impression, noted here since last summer, that a slow reaccumulation process is underway—the word s1t low being the operative one. The latest move to a new high a month ago produced what has come to be the expected aftermath. and the Dow has now backed off some 3-4 from that peak; A small top now exists with downside objectives between 2080 and 2000. Ability to hold in that range would maintain the pattern of ascending lows in effect since 1987 and would constitute an encouraging sign. Current patterns suggest that the August 23 low of 1989.33 probably will hold. and that the post-crash pattern should remain intact. ANTHONY W. TABELL DELAFIELD. HARVEY. TABELL INC. Dow Jones Industrials (12 00) 2092.10 S & P 500 (1200) Cumulative Index (11/10/88) AWTebh ' 270.61 3889.09 No statement or expression of opInion or any other matler herein contained IS, or IS to be deemed 10 be, directly or indirectly, an offer orthe soliCitation of an offer to buy or sell any secUrity referred to or mentioned The matter IS presented merely for the convenience of the subscriber While we believe the sources of our Informallon to be reliable, we In no way represent or guarantee the accuracy thereof nor olthe statements made herein Any action to be taken by the subscriber should be based on hiS own Investigation and Information Delafield, Harvey, Tabelllnc, as a corporal1on and ItS officers or employees, may now have, or may later take, positions or trades In respect to any securities mentioned In thiS or any future ISsue, and such posillon may be different from any views now or hereafter expressed In thiS or any other Issue Delafield, Harvey, Tabelllnc, which IS registered wtlh the SEC as an Investment adVisor, may give advice to fls Investment adVISOry and other customers Independently of any statements made In thiS or In any other Issue Further mformatlon on any secUrity mentioned herein IS available on request