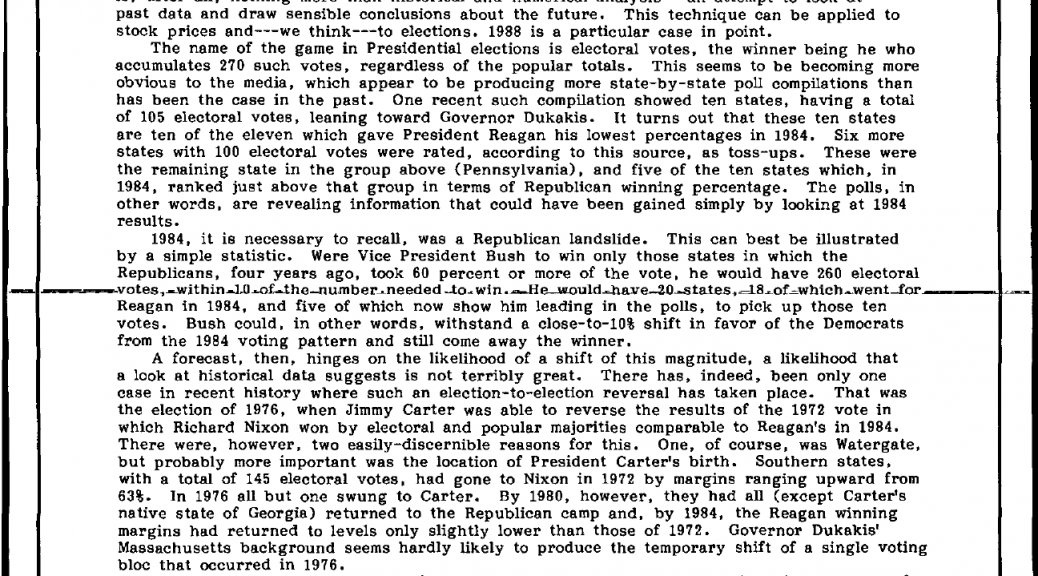 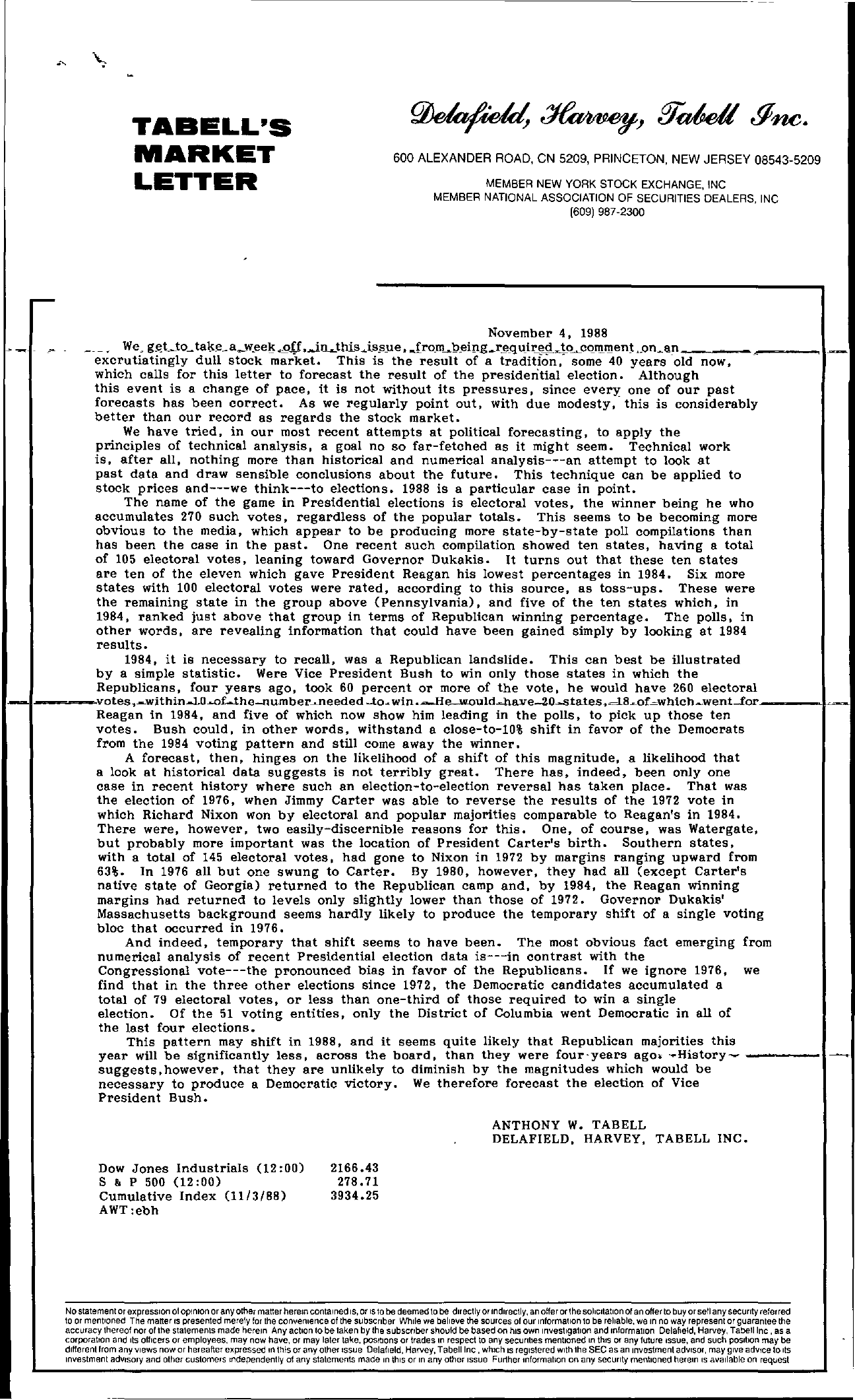 TABELL'S MARKET LETTER 600 ALEXANDER ROAD, eN 5209, PRINCETON, NEW JERSEY 08543-5209 MEMBER NEW YORK STOCK EXCHANGE, INC MEMBER NATIONAL ASSOCIATION DF SECURITIES DEALERS, INC 609) 987-2300 November 4, 1988 We gLto tal5.e 8 week. gif ….itL,Jhis -LissJ.le ..irom…being.-rstq uired dO-,—CQQlmen honan – – – excrutiatingly dull stock market. This is the result of a tradition'- some 40 years old now, which calls for this letter to forecast the result of the presidential election. Although this event is a change of pace, it is not without its pressures J since everyone of our past forecasts has been correct. As we regularly point Qut, with due modesty,- this is considerably better than our record as regards the stock market. We have tried, in our most recent attempts at political forecasting, to apply the principles of technical analysis, a goal no so far-fetched as it might seem. Technical work is, after all, nothing more than historical and numerical analysis—an attempt to look at past data and draw sensible conclusions about the future. This technique can be applied to stock prices and—we think—to elections. 1988 is a particular case in point. The name of the game in Presidential elections is electoral votes, the winner being he who accumulates 270 such votes, regardless of the popular totals. This seems to be becoming more obvious to the media, which appear to be producing more state-by-state poll compilations than has been the case in the past. One recent such compilation showed ten states, having a total of 105 electoral votes, leaning toward Governor Dukakis. It turns out that these ten states are ten of the eleven which gave President Reagan his lowest percentages in 1984. Six more states with 100 electoral votes were rated, according to this source, as toss-ups. These were the remaining state in the group above (Pennsylvania), and five of the ten states which, in 1984, ranked just above that group in terms of Republican winning percentage. The polls, in other words, are revealing information that could have been gained simply by looking at 1984 results. 1984, it is necessary to recall, was a Republican landslide. This can best be illustrated by a simple statistic. Were Vice President Bush to win only those states in which the Republicans, four years ago, took 60 percent or more of the vote, he would have 260 electoral 1votes-,within..-.lOf.the-number—-needed to … wi n ….-He-would….ha..ve-2.0.-states…d..S…,.of..which ……went-for –I Reagan in 1984, and five of which now show him leading in the polls, to pick up those ten votes. Bush could, in other words, withstand a close-to-10 shift in favor of the Democrats from the 1984 voting pattern and still come away the winner. A forecast, then, hinges on the likelihood of a shift of this magnitude, a likelihood that a look at historical data suggests is not terribly great. There has, indeed, been only one case in recent history where such an election-ta-election reversal has taken place. That was the election of 1976, when Jimmy Carter was able to reverse the results of the 1972 vote in which Richard Nixon won by electoral and popular majorities comparable to Reagan's in 1984. There were, however, two easily-discernible reasons for this. One, of course. was Watergate. but probably more important was the location of President Carter's birth. Southern states, with a total of 145 electoral votes, had gone to Nixon in 1972 by margins ranging upward from 63. In 1976 all but one swung to Carter. By 1980, however, they had all (except Carter's native state of Georgia) returned to the Republican camp and, by 1984, the Reagan winning margins had returned to levels only slightly lower than those of 1972. Governor Dukakis' Massachusetts background seems hardly likely to produce the temporary shift of a single voting bloc that occurred in 1976. And indeed, temporary that shift seems to have been. The most obvious fact emerging from numerical analysis of recent Presidential election data is—in contrast with the Congressional vote—the pronounced bias in favor of the Republicans. If We ignore 1976, we find that in the three other elections since 1972, the Democratic candidates accumulated a total of 79 electoral votes, or less than one-third of those required to win a single election. Of the 51 voting entities, only the District of Columbia went Democratic in all of the last four elections. This pattern may shift in 1988, and it seems quite likely that Republican majorities this year will be significantly less, across the board, than they were four-years ago…… History– – – – – suggests, however, that they are unlikely to diminish by the magnitudes which would be necessary to produce a Democratic victory. We therefore forecast the election of Vice President Bush. ANTHONY W. TABELL DELAFIELD, HARVEY, TABELL INC. Dow Jones Industrials (12 00) S & P 500 (1200) Cumulative Index (11/3/88) AWTebh 2166.43 278.71 3934.25 No statement or expression ot opinIOn or any other matler herein contained IS, or IS to be deemed 10 be directly or Indirectly, an offer orthe solicitatIOn of an offer to buy or sell any secUrity referred to or mentioned The matter IS presented merety lor the convenience of the subscriber While we beheve the sources of our information to be rehable, we In no way represent or guarantee the accuracy thereof nor of the statements made herein Any action to be taken by the subSCriber should be based on hiS own investigation and Information Delafield, Harvey, Tabelllnc, as a corporatIOn and ItS officers or employees, may now have, or may later take, positions or trades In respect to any seCUrities menlloned In thiS or any future Issue, and such posrhon may be different from any views now or hereafter expressed In this or any other Issue Delafield, Harvey, Tabelllnc, which IS registered With the SEC as an Investment adVisor, may give adVice to ItS Investment adVISory and other customers Independently of any statements made In thiS or In any other Issue Further mformatlon on any seCUrity mentIOned herein IS available on request