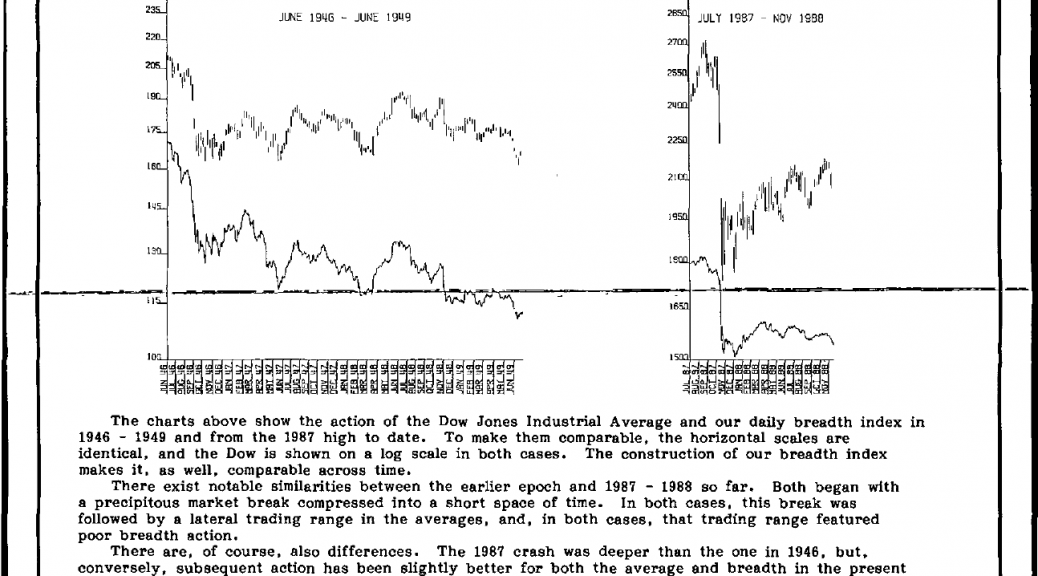 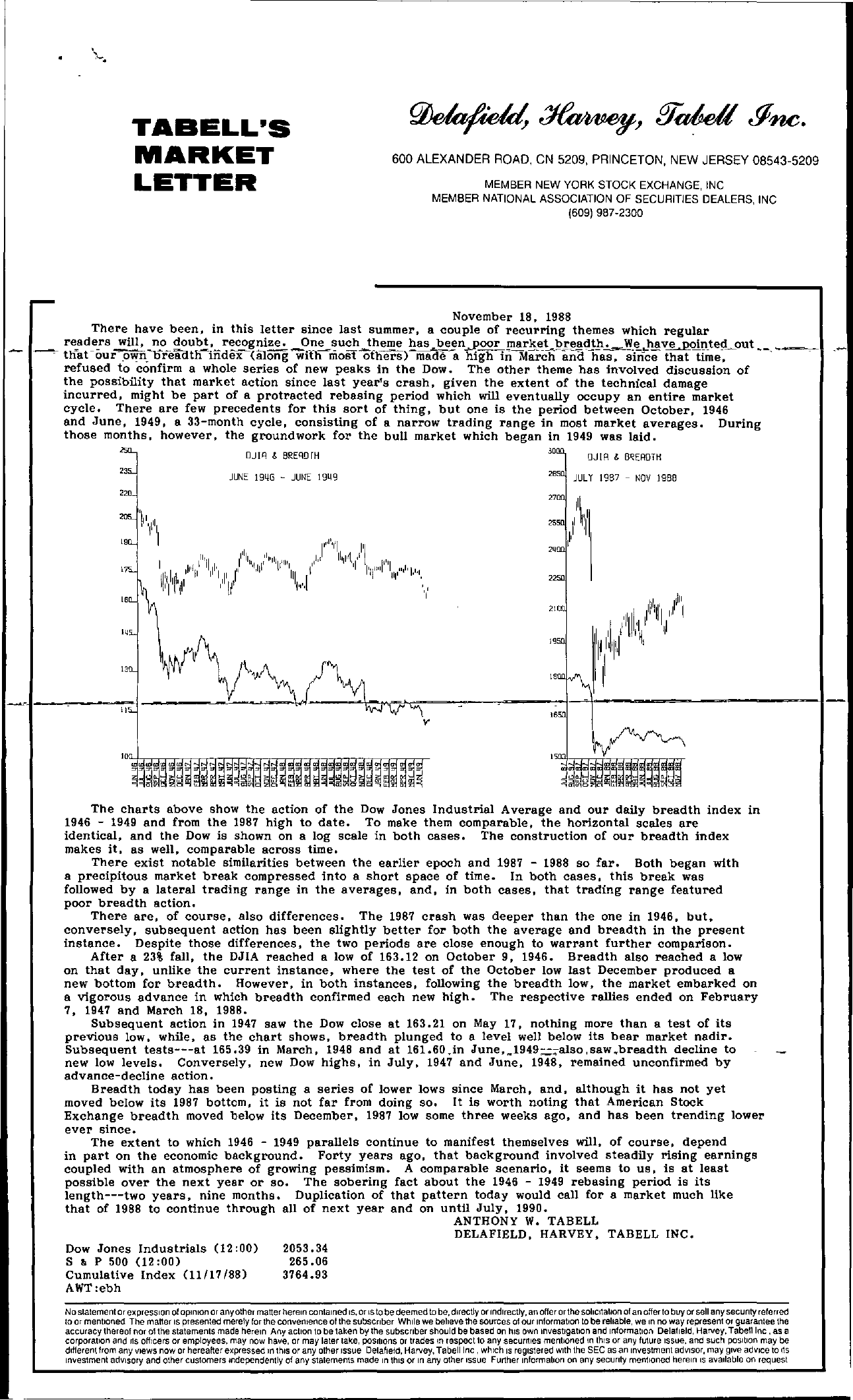 \ ,. TABELL'S MARKET LETTER 600 ALEXANDER ROAD, CN 5209, PRINCETON, NEW JERSEY 08543-5209 MEMBER NEW YORK STOCK EXCHANGE, INC MEMBER NATIONAL ASSOCIATION OF SECURITIES DEALERS, INC (6091987-2300 November 18. 1988 There have been, in this letter since last summer. a couple of recurring themes which regular readers will, no doubt. recognize. One such theme has been.poor market breadth. We havointed out – Ulat-ou-oreadth—index(iIong wilfi…inostoihers)-a high InMarch-aiid–hasin'ce thaftime-. .. -'—- refused to confirm a whole series of new peaks in the Dow. The other theme has inVOlved discussion of the possibility that market action since last year's crash. given the extent of the technical damage incurred, might be part of a protracted rebasing period which will eventually occupy an entire market cycle. There are few precedents for this sort of thing. but one is the period between October. 1946 and June, 1949, a 33-month cycle, consisting of a narrow trading range in most market averages. During those months, however. the groundwork for the bull market which began in 1949 was laid. OJIA t BEAOTH JUNE 194G – JUNE 1949 1987 – NOV 1988 The charts above show the action of the Dow Jones Industrial Average and our daily breadth index in 1946 – 1949 and from the 1987 high to date. To make them comparable, the horizontal scales are identical. and the Dow is shown on a log scale in both cases. The construction of our breadth index makes it, 8S well. comparable across time. There exist notable similarities between the earlier epoch and 1987 – 1988 so far. Both began with a precipitous market break compressed into a short space of time. In both cases, this break was followed by a lateral trading range in the averages. and. in both cases. that trading range featured poor breadth action. There are, of course. also differences. The 1987 crash was deeper than the one in 1946. but, conversely, subsequent action has been slightly better for both the average and breadth in the present instance. Despite those differences. the two periods are close enough to warrant further comparison. After a 23 fall. the DJIA reached a low of 163.12 on October 9. 1946. Breadth also reached a low on that day. unlike the current instance, where the test of the October low last December produced a new bottom for breadth. However, in both instances, following the breadth low. the market embarked on a vigorous advance in which breadth confirmed each new high. The respective rallies ended on February 7. 1947 and March 18. 1988. Subsequent action in 1947 saw the Dow close at 163.21 on May 17, nothing more than a test of its previous low. while. as the chart shows. breadth plunged to a level well below its bear market nadir. Subsequent tests—at 165.39 in March, 1948 and at 161.60 in June. MI949;-also, saw …-breadth decline to new low levels. Conversely. new Dow highs, in July. 1947 and June. 1948, remained unconfirmed by advance-decline action. Breadth today has been posting a series of lower lows since March, and. although it has not yet moved below its 1987 bottom, it is not far from doing so. It is worth noting that American Stock Exchange breadth moved below its December. 1987 low some three weeks ago. and has been trending lower ever since. The extent to which 1946 – 1949 parallels continue to manifest themselves will. of course, depend in part on the economic background. Forty years ago, that background involved steadily rising earnings coupled with an atmosphere of growing pessimism. A comparable scenario. it seems to us, is at least possible over the next year or so. The sobering fact about the 1946 – 1949 rebasing period is its length—two years. nine months. Duplication of that pattern today would call for a market much like that of 1988 to continue through all of next year and on until July. 1990. ANTHONY W. TABELL DELAFIELD, HARVEY. TABELL INC. Dow Jones Industrials 02 00) s P 500 (1200) 2053.34 265.06 Cumulative Index (1117188) 3764.93 AWTebh No statement Or expression of opInion or any other matler herein contained IS, or IS to be deemed to be, directly or Indirectly, an offer orthe soliCitation of an oHerto buy or sell any security referred to or menllOned The maner IS presented merely for the convenience of the subsCriber While we believe the sources of our information to be reliable, we In no way represent or guarantee the accuracy thereof nor 01 the statements made herem Any action to be taken by the subscriber should be based on hiS own Investigation and Information Delafield, Harvey, Tabetl Inc, as a corporation and s oHlcers or employees, may now have, or may later take, poslons or trades In respect to any securities mentioned m thiS or any future Issue, and such position may be different from any views now or hereafter expressed In thiS or any olher Issue Delafield, Harvey, Tabelllnc, which IS registered With Ihe SEC asan Investment adVisor, may give adVice to Its Investment adVisory and other customers Independently of any statements made In thIS or In any other Issue Further Informabon on any security mentioned herein IS available on request