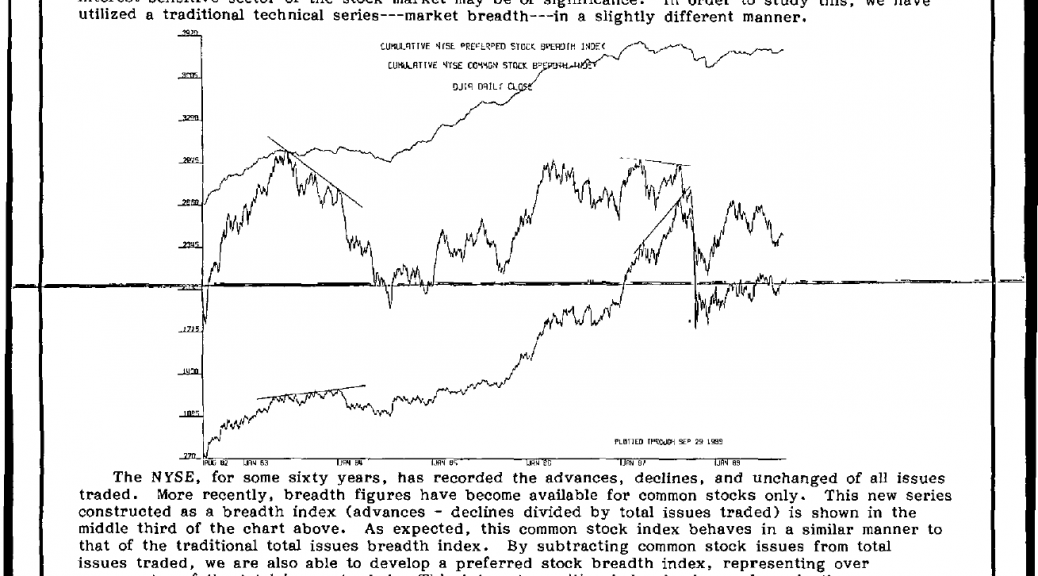 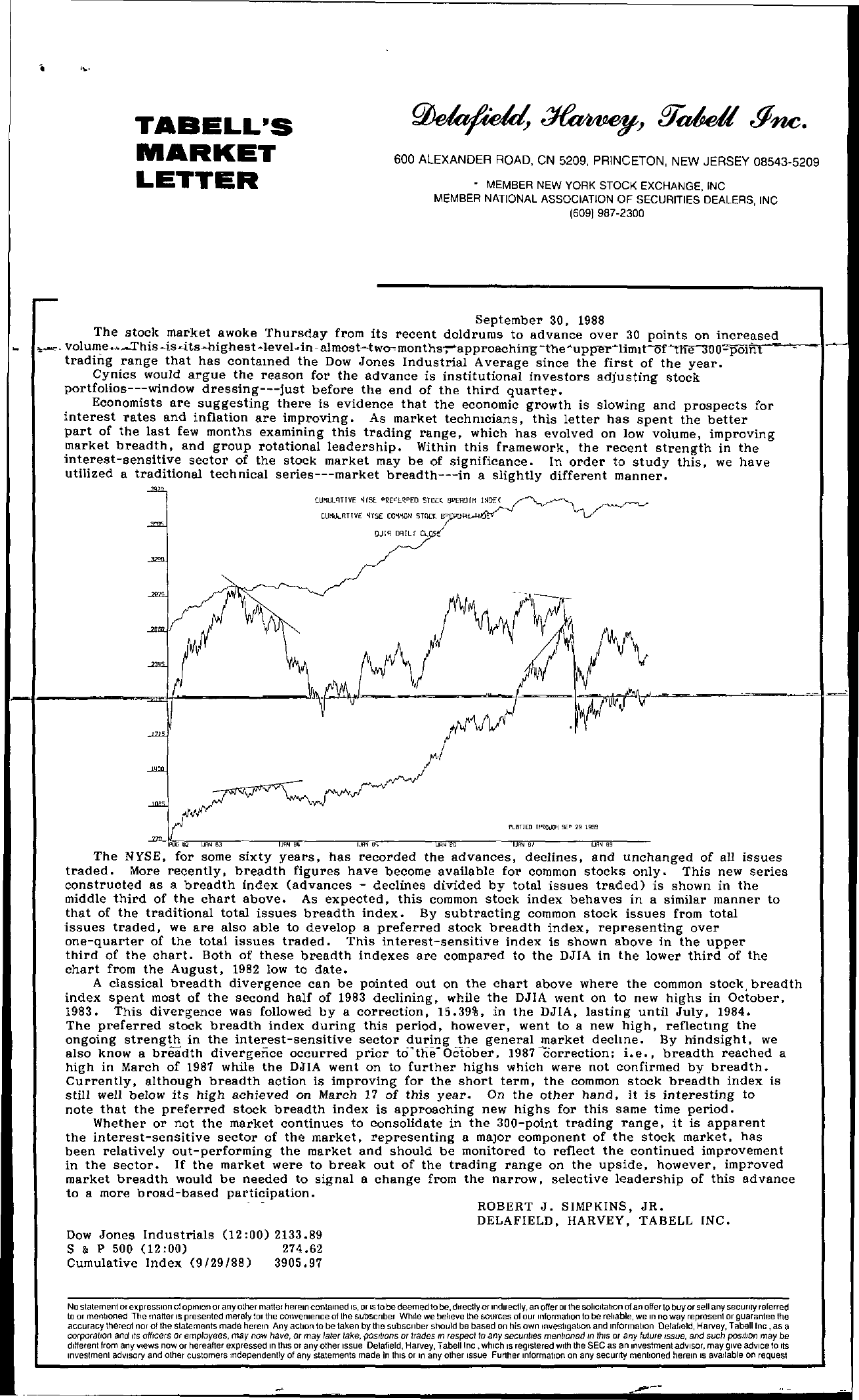 TABELL'S MARKET LETTER 600 ALEXANDER ROAD, CN 5209, PRINCETON, NEW JERSEY 085435209 MEMBER NEW YORK STOCK EXCHANGE, INC MEMBER NATIONAL ASSOCIATION OF SECURITIES DEALERS, INC (609) 9872300 September 30, 1988 The stock market awoke Thursday from its recent doldrums to advance over 30 points on increased .. volume . This-isits-highest.levelinalmost-twomonthsapproachirrg-the'uppe-limltof-tl1-eJUUPOiJrt'–I trading .range that has contamed the Dow Jones Industrial Average since the first of the year. Cymcs would argue the reason for the advance is institutional investors adJ'usting stock portfolios—window dressing—just before the end of the third quarter. Economists are suggesting there is evidence that the economic growth is slowing and prospects for interest rates and inflation are improving. As market technIcians, this letter has spent the better part of the last few months examining this trading range, which has evolved on low volume. improving arket bread.t, and group rotational leadership. Within this framework, the recent strength in the interest-sensItive sector of the stock market may be of significance. In order to study this. we have utilized a traditional technical series—market breadth—in a slightly different manner. – C.Ur.ULQTlVE 'lrSl PREt.PED sTIlet. 6PEHrH 140( LUMU…ATlV 'l'l'SE eo\\o SHlCl. BP ,0 !JJlq oq!U CL PLOTlED 11O!JGj SE 29 19 lR 8 JR 8 JR fIN 61 J 89 The NYSE. for some sixty years. has recorded the advances, declines, and unchanged of all issues traded. More recently. breadth figures have become available for common stocks only. This new series constructed as a breadth index (advances – declines divided by total issues traded) is shown in the middle third of the chart above. As expected. this common stock index behaves in a similar manner to that of the traditional total issues breadth index. By subtracting common stock issues from total issues traded. we are also able to develop a preferred stock breadth index, representing over one-quarter of the total issues traded. This interest-sensitive index is shown above in the upper third of the chart. Both of these breadth indexes are compared to the DJIA in the lower third of the chart from the August, 1982 low to date. A classical breadth divergence can be pointed out on the chart above where the common stock, breadth index spent most of the second half of 1983 declining, while the DJIA went on to new highs in October, 1983. This divergence was followed by a correction, 15.39, in the DJIA, lasting until July. 1984. The preferred stock breadth index during this period. however. went to a new high. reflectIng the ongoing strength in the interest-sensitive sector during the general market dechne. By hindsight, we toalso know a breadth divergence occurred prior 1 theOctober. 1987 correction; i.e., breadth reached a high in March of 1987 while the DJIA went on to further highs which were not confirmed by breadth. Currently, although breadth action is improving for the short term. the common stock breadth index is still well below its high achieved on March 17 of this year. On the other hand, it is interesting to note that the preferred stock breadth index is approaching new highs for this same time period. Whether or not the market continues to consolidate in the 300-point trading range. it is apparent the interest-sensitive sector of the market. representing a major component of the stock market, has been relatively out-performing the market and should be monitored to reflect the continued improvement in the sector. If the market were to break out of the trading range on the upside, however. improved market breadth would be needed to signal a change from the narrow, selective leadership of this advance to a more broad-based participation. ROBERT J. SIMPKINS, JR. DELAFIELD, HARVEY, TABELL INC. Dow Jones Industrials (12 00) 2133.89 S & P 500 (12 00) 274.62 Cumulative Index (9129188) 3905.97 No statement or expression 01 opinion or any other matter herein contained IS, or IS to be deemed to be, directly or indirectly, an offer or the soliCitatIOn of an offerlo buy or sell any security referred to or mentioned The matter IS presented merely lor the convenience of the subscriber While we beheve the sources of our Information to be reliable, we In no way represent or guarantee the accuracy thereof nor of the statements made herein Any action to be taken by the subSCriber should be based on his own Iwestlgabon and information Delafield, Harvey, Tabellinc. as a corporation and Its offICers or employees, may now have, or may later lake, posllions or trades In respect to any secunfles mentioned In thiS or any future Issua, and svch position may be dlHerent from any views now or hereafter expressed In thiS or any other Issue Delafield, Harvey, Tabelltnc. which IS registered With the SEC as an Investment advisor, may give advice to Its Investment adVISOry and other customers mdependently of any statements made in thiS or In any other Issue Further Information on any security mentioned herein IS available on request