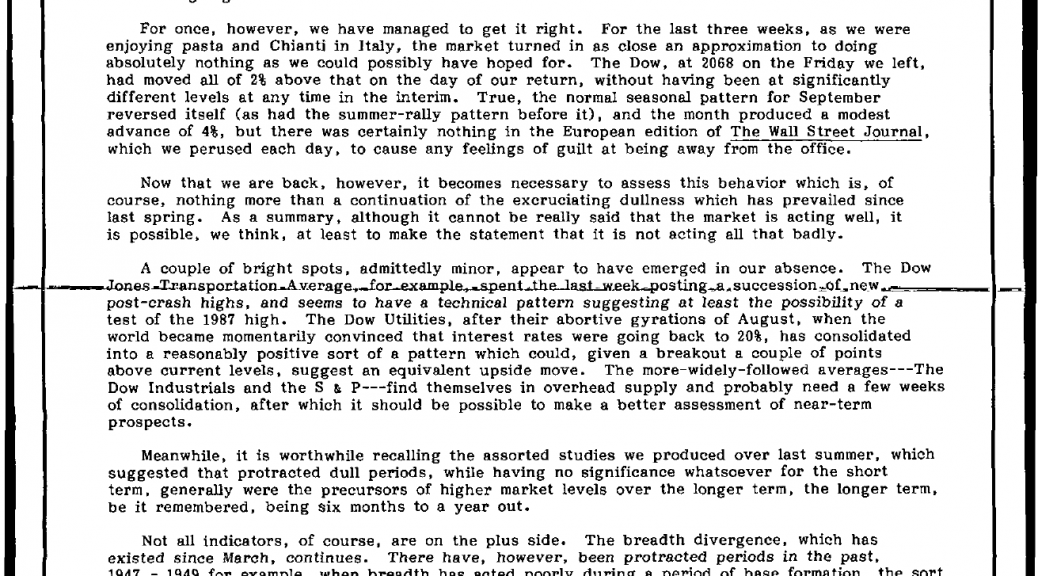 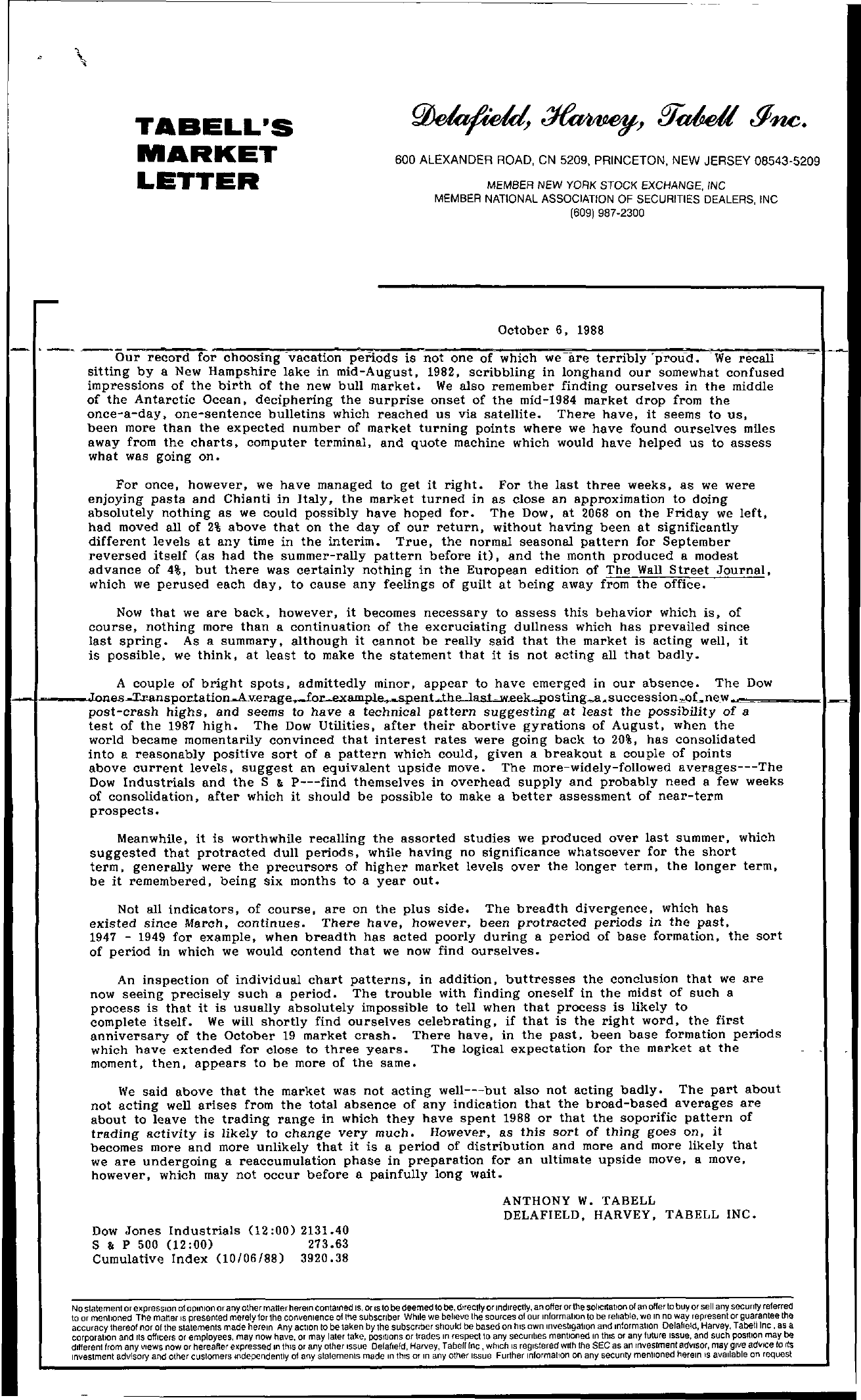 TABELL'S MARKET LETTER 600 ALEXANDER ROAD, CN 5209, PRINCETON, NEW JERSEY 08543-5209 MEMBER NEW YORK STOCK EXCHANGE, INC MEMBER NATIONAL ASSOCIATION OF SECURITIES DEALERS, INC (609) 987-2300 October 6, 1988 1- , — -Our record for nPMnno is not one of 'which' we are y prou'ci'. 'We recall sitting by a New Hampshire lake in mid-August, 1982, scribbling in longhand our somewhat confused impressions of the birth of the new bull market. We also remember finding ourselves in the middle of the Antarctic Ocean, deciphering the surprise onset of the mid-1984 market drop from the once-a-day one-sentence bulletins which reached us via satellite There have. it seems to us, been more than the expected number of market turning points where we have found ourselves miles away from the charts, computer terminal, and quote machine which would have helped us to assess what was going on. For once, however, we have managed to get it right. For the last three weeks. as we were enjoying pasta and Chianti in Italy, the market turned in as close an approximation to doing absolutely nothing as we could possibly have hoped for. The Dow, at 2068 on the Friday we left, had moved all of 2 above that on the day of our return, without having been at significantly different levels at any time in the interim. True, the normal seasonal pattern for September reversed itself (as had the summer-rally pattern before it), and the month produced a modest advance of 4, but there was certainly nothing in the European edition of The Wall Street Journal, which we perused each day, to cause any feelings of guilt at being away from the office. Now that we are back. however, it becomes necessary to assess this behavior which is, of course, nothing more than a continuation of the excruciating dullness which has prevailed since last spring. As a summary, although it cannot be really said that the market is acting well, it is possible, we think, at least to make the statement that it is not acting all that badly. A couple of bright spots, admittedly minor, onno to have T. A fn ,nontho 10, -,. ,,,. in our absence. The Dow .C 0 oLnew I, 'Ipost-crash s, and seems to have a .. at Ia;t the possibility of a test of the high. The Dow Utilities, after their ,vv.uvc gyrations of August, when the world became momentarily convinced that interest rates were going back to 20, has consolidated into a reasonably positive sort of a pattern which could, given a breakout a couple of points above current levels suggest an equivalent upside movea The more-widely-followed averages—The Dow Industrials and the S & P—find themselves in overhead supply and probably need a few weeks of consolidation. after which it should be possible to make a better assessment of near-term prospects. Meanwhile, it is worthwhile recalling the assorted stUdies we produced over last summer. which suggested that protracted dull periods, while having no significance whatsoever for the short term, generally were the precursors of higher market levels over the longer term, the longer term. be it remembered. being six months to a year out. Not all indicators, of course, are on the plus side. The breadth divergence, which has existed since March. continues. There have, however. been protracted periods in the past. 1947 – 1949 for example, when breadth has acted poorly during a period of base formation, the sort of period in which we would contend that we now find ourselves. An inspection of individual chart patterns, in addition. buttresses the conclusion that we are now seeing precisely such a period. The trouble with finding oneself in the midst of such a process is that it is usually absolutely impossible to tell when that process is likely to complete itself. We will shortly find ourselves celebrating, if that is the right word, the first anniversary of the October 19 market crash. There have. in the past, been base formation periods which have extended for close to three years. The logical expectation for the market at the moment. then. appears to be more of the same. We said above that the market was not acting well—but also not acting badly. The part about not acting well arises from the total absence of any indication that the broad-based averages are about to leave the trading range in which they have spent 1988 or that the soporific pattern of trading activity is likely to change very much. However. as this sort of thing goes on, it becomes more and more unlikely that it is a period of distribution and more and more likely that we are undergoing a reaccumulation phase in preparation for an ultimate upside move. a move, however. which may not occur before a painfully long wait. Dow Jones Industrials (12 00) 2131.40 S & P 500 0200) 273.63 Cumulativ Index (0106/88) 3920.38 ANTHONY W. TABELL DELAFIELD, HARVEY, TAB ELL INC. Nostatement or expression of opinion or any other matter herein contained IS, or IS to be deemed to be, dlrecttyer Indlrectty, an offeror the solicitation of an offer to buyer sell any secUrity referred to or mentioned The matter IS presented merely ior the convenience of the subscriber While we beheve the sources of our information to be reliable, we In no way represent or guarantee the accuracy Ihereof nor of the statements made herein Any acllOn to be taken by the subScriber should be based On hiS own Investrgatlon and InformallOn Delafle!d, Harvey, Tabetllnc , as a corporatIOn and ItS officers or employees, may now have, or may later take, poSItions or trades In respect to any securrbes mentIOned In thIS or any future Issue, and such position may be different from any views now or hereafter expressed In thiS or any other Issue Delafield, Harvey, Tabeff fnc , which IS registered wrlh the SEC as an Investment advrsor, may grve adVice to Its Investment advlsory and other customers Independently 01 any statements made In thiS or In any other Issue Further Informahon on any seCUrity menllOned herein IS available on request