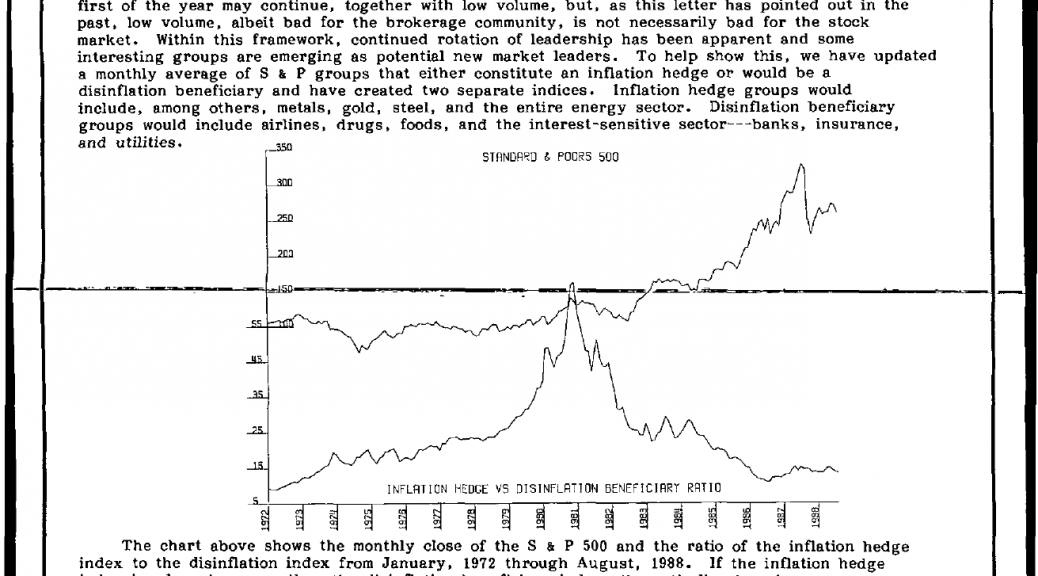 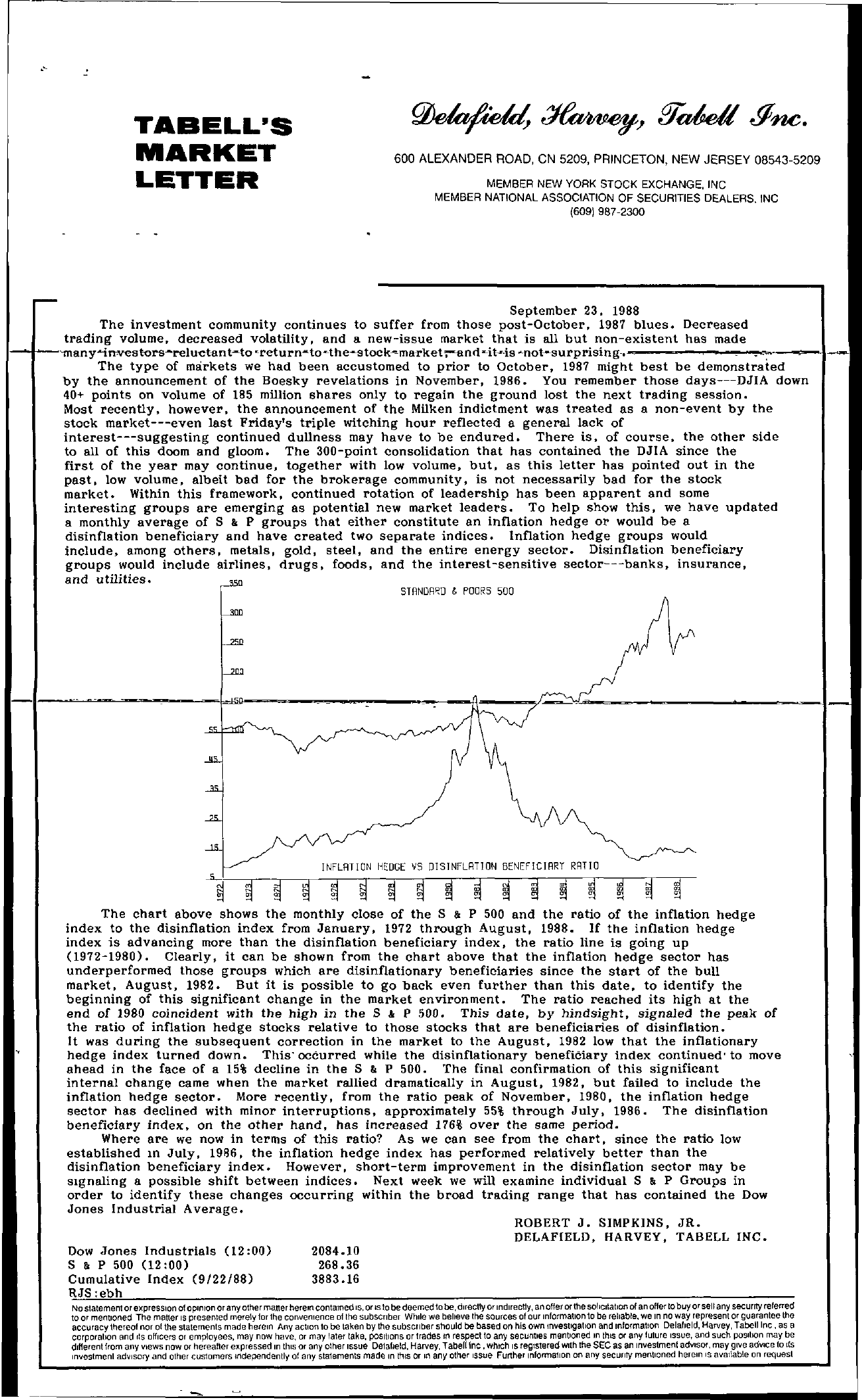 TABELL'S MARKET LETTER 600 ALEXANDER ROAD. eN 5209. PRINCETON, NEW JERSEY 08543-5209 MEMBER NEW YORK STOCK EXCHANGE. INC MEMBER NATIONAL ASSOCIATION OF SECURITIES DEALERS. INC (609) 987-2300 September 23. 1988 The investment community continues to suffer from those post-October, 1987 blues. Decreased trading volume. decreased volatility. and a new-issue market that is all but non-existent has made 1—t—'lnanv'lnvestolN!re,luet1ont10'return-tothe-stockmaTketnditisnoS\lrl'ri.silg.—————-1— The type of markets we had been accustomed to prior to October. 1987 might best be demonstrated by the announcement of the Boesky revelations in November, 1986. You remember those days—DJIA down 40 points on volume of 185 million shares only to regain the ground lost the next trading session. Most recently. however. the announcement of the Milken indictment was treated as a non-event by the stock market—even last Friday's triple witching hour reflected a general lack of interest—suggesting continued dullness may have to be endured. There is. of course. the other side to all of this doom and gloom. The 300-point consolidation that has contained the DJIA since the first of the year may continue. together with low volume. but, as this letter has pointed out in the past, low volume. albeit bad for the brokerage community, is not necessarily bad for the stock market. Within this framework, continued rotation of leadership has been apparent and some interesting groups are emerging as potential new market leaders. To help show this, we have updated a monthly average of S ' P groups that either constitute an inflation hedge or would be a disinflation beneficiary and have created two separate indices. Inflation hedge groups would include, among others, metals, gold, steel, and the entire energy sector. Disinflation beneficiary groups would include airlines, drugs, foods. and the interest-sensitive sector—banks, insurance. and utilities. STRNDReo t PooRS 500 INFLATION HEDGE VS DISINFLATION BENEFICIARY RATIO The chart above shows the monthly close of the S ' P 500 and the ratio of the inflation hedge index to the disinflation index from January. 1972 through August. 1988. If the inflation hedge index is advancing more than the disinflation beneficiary index, the ratio line is going up (1972-1980). Clearly. it can be shown from the chart above that the inflation hedge sector has underperformed those groups which are disinflationary beneficiaries since the start of the bull market. August. 1982. But it is possible to go back even further than this date. to identify the beginning of this significant Change in the market environment. The ratio reached its high at the end of 1980 coincident with the high in the S ' P 500. This date. by hindsight. signaled the peak of the ratio of inflation hedge stocks relative to those stocks that are beneficiaries of disinflation. It was during the subsequent correction in the market to the August, 1982 low that the inflationary hedge index tUrned down. This' occurred While the disinflationary beneficiary index continued' to move ahead in the face of a 15 decline in the S ' P 500. The final confirmation of this significant internal change came when the market rallied dramatically in August, 1982. but failed to include the inflation hedge sector. More recently. from the ratio peak of November. 1980. the inflation hedge sector has declined with minor interruptions. approximately 55 through July. 1986. The disinflation beneficiary index. on the other hand. has increased 176 over the same period. Where are we now in terms of this ratio As we can see from the chart, since the ratio low established In July. 1986. the inflation hedge index has performed relatively better than the disinflation beneficiary index. However, short-term improvement in the disinflation sector may be slgnaling a possible shift between indices. Next week we will examine individual S III P Groups in order to identify these changes occurring within the broad trading range that has contained the Dow Jones Industrial Average. ROBERT J. SIMPKINS. JR. DELAFIELD, HARVEY. TAB ELL INC. Dow Jones Industrials (1200) 2084.10 S ' P 500 (1200) Cumulative Index (9/22/88) 268.36 3883.16 RJS ebh No statement or expression of opinIOn or any other maner herein contained IS, or IS to be deemed to be, dlrectty or Indirectly, an offer or the sohcltallon of an offer to buy or sell any secUrity referred to or mentioned The matter IS presented merely for the convenience of the subSCriber While we beheve the sources of our Information to be rehable, we In no way represent or guarantee the accuracy thereof nor of the statements made herein Any action to be taken by the subSCriber should be based on his own Investlgallon and Information Delafield, Harvey, Tabelllnc, as a corporation and ItS officers or employees, may now have, or may later take, poSitions or trades In respect to any seCUrities mentioned In thiS or any future Issue, and such pOSition may be different from any views now or hereafter expressed In thiS or any other Issue Delafield, Harvey, Tabell Inc, whICh IS registered With the SEC as an Investment adVIsor, may 91ve adVICe to Its Investment adVISOry and other cus10mers Irldependently of any statements made In thiS or In any other Issue Further InformaMn on any security mentioned herein IS available on request