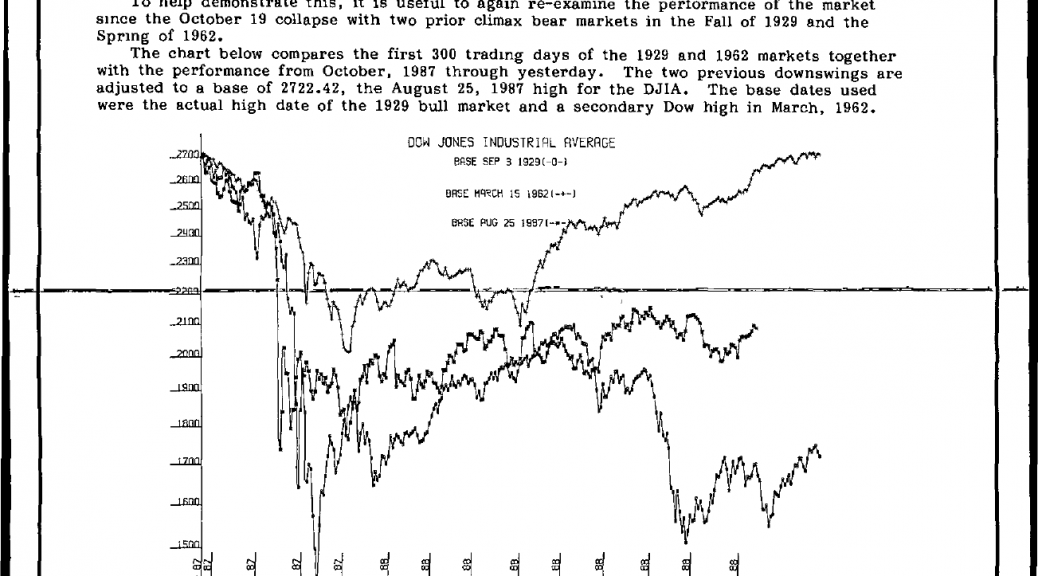 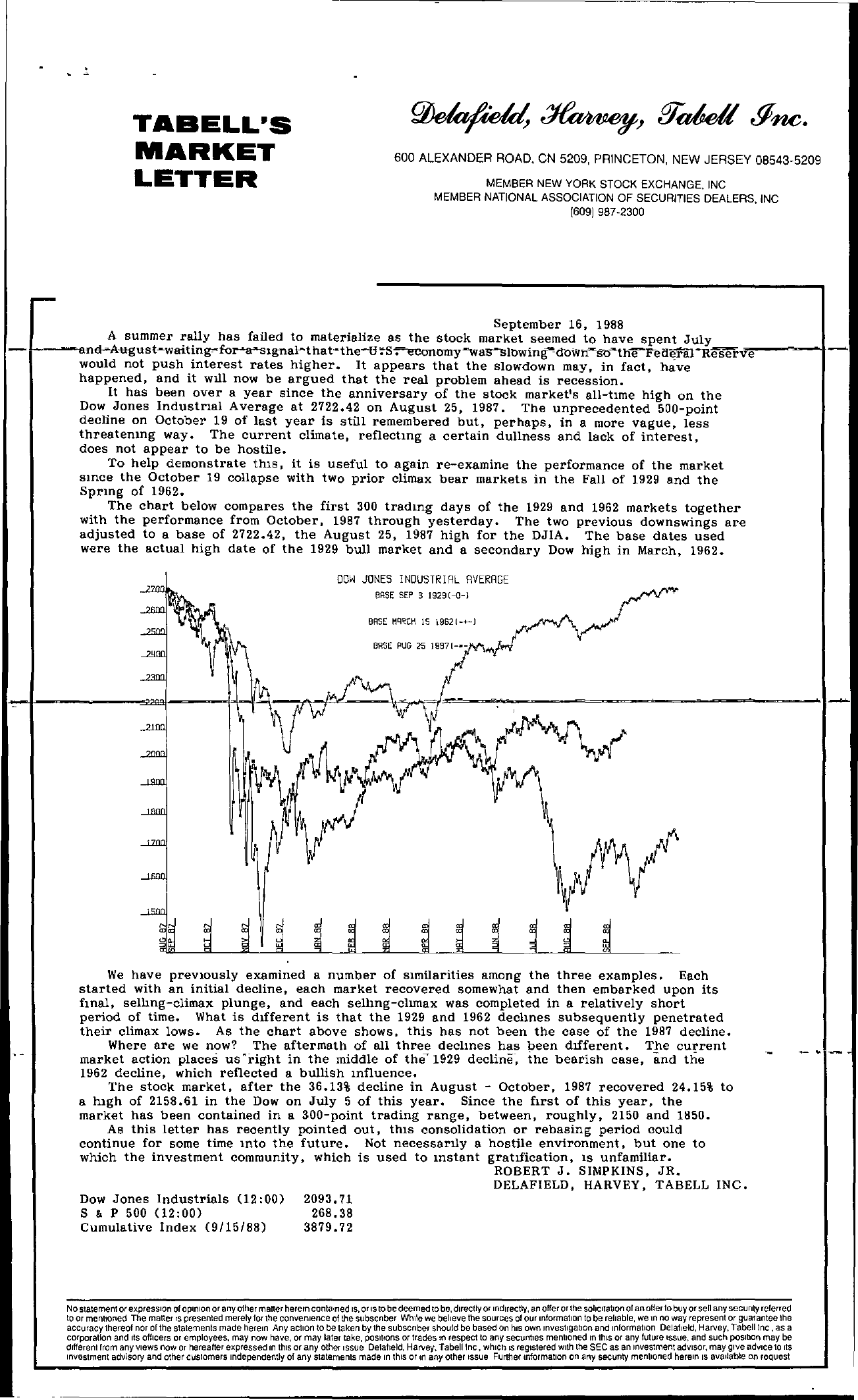 TABELL'S MARKET LETTER 600 ALEXANDER ROAD, CN 5209, PRINCETON, NEW JERSEY 08543-5209 MEMBER NEW YORK STOCK EXCHANGE, INC MEMBER NATIONAL ASSOCIATION OF SECURITIES DEALERS, INC (609) 987-2300 September 16, 1988 A summer rally has failed to materialize as the stock market seemed to have spent STeconomy-waB–slowing-dnwnSO-theFeaei'1il-Rifii-ifP—-l would not push interest rates higher. It appears that the slowdown may, in fact, have happened, and it will now be argued that the real problem ahead is recession. It has been over a year since the anniversary of the stock market's all-hme high on the Dow Jones IndustrIal Average at 2722.42 on August 25, 1987. The unprecedented 500-point decline on October 19 of last year is still remembered but, perhaps, in a more vague, less threatenlng way. The current climate, reflectIng a certain dullness and lack of interest, does not appear to be hostile. To help demonstrate thIS, it is useful to again re-examine the performance of the market smce the October 19 collapse with two prior climax bear markets in the Fall of 1929 and the Sprmg of 1962. The chart below compares the first 300 tradmg days of the 1929 and 1962 markets together with the performance from October, 1987 through yesterday. The two previous downswings are adjusted to a base of 2722.42, the August 25, 1987 high for the DJIA. The base dates used were the actual high date of the 1929 bull market and a secondary Dow high in March, 1962. DOW JONES INDUSTRIAL AVERAGE BASE SEP 3 1929(-0-) BASE HqCH 15 1962(–J BRSE PUG 25 1997,-.-I'o;C' We have previously examined a number of sImilarities among the three examples. Each started with an initial decline, each market recovered somewhat and then embarked upon its fInal, selhng-climax plunge, and each selhng-chmax was completed in a relatively short period of time. What is dlfferent is that the 1929 and 1962 dechnes subsequently penetrated their climax lows. As the chart above shows. this has not been the case of the 1987 decline. Where are we now The aftermath of all three dechnes has been dIfferent. The current market action places us right in the middle of the 1929 declinir, the bearish case, and the 1962 decline, which reflected a bullish mfluence. The stock market, after the 36.13 decline in August – October, 1987 recovered 24.15 to a h'gh of 2158.61 in the Dow on July 5 of this year. Since the f,rst of this year, the market has been contained in a 300-point trading range, between, roughly, 2150 and 1850. As this letter has recently pointed out, thIS consolidation or rebasing period could continue for some time Into the future. Not necessarlly a hostile environment, but one to which the investment community, which is used to Instant grahfication, IS unfamiliar. ROBERT J. SIMPKINS, JR. DELAFIELD, HARVEY, TABELL INC. Dow Jones Industrials (12 00) 2093.71 S & P 500 (1200) 268.38 Cumulative Index (9/15/88) 3879.72 No statement or expression 01 opInion or any other matter herein contained IS, or IS to be deemed to be, directly or indirectly, an offeror the soliCitation of an offer to buy or sell any securrty relerred to or mentioned The matter IS presented merely for the convenience of the subscnber Whlle we beheve the sources of our mformallOn to be reliable, we 10 no way represent or guarantee the aCCuracy thereof nor olthe statements made herein Any action to be taken by the subscriber should be based on hiS own investigation and Information Delafield, HalVey, Tabelllnc, as a corporation and Its officers or employees, may now have, or may laler take, pOSitIons or trades In respect to any securities menlloned In thiS or any future Issue, and such posillon may be different from any views now or hereafter expressed In thiS or any other Issue Delafield, HalVey, Tabelllnc, which IS registered With the SEC as an Inveslmentadvlsor, may give advice to ItS Investment advIsory and other customers Independently of any statements made In thiS or In any other Issue Further mformatlon on any secunty mentioned herein IS available on request