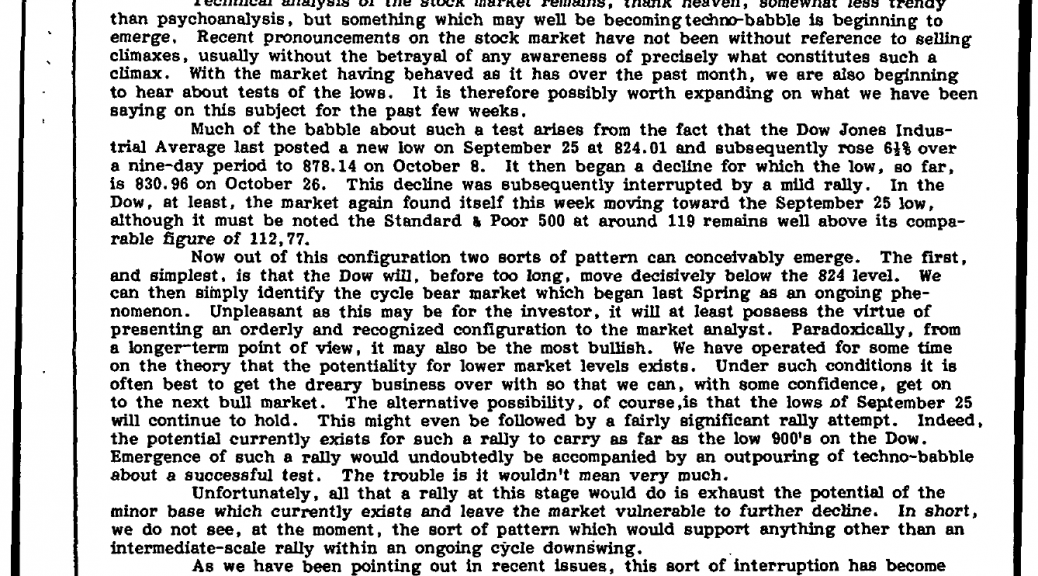 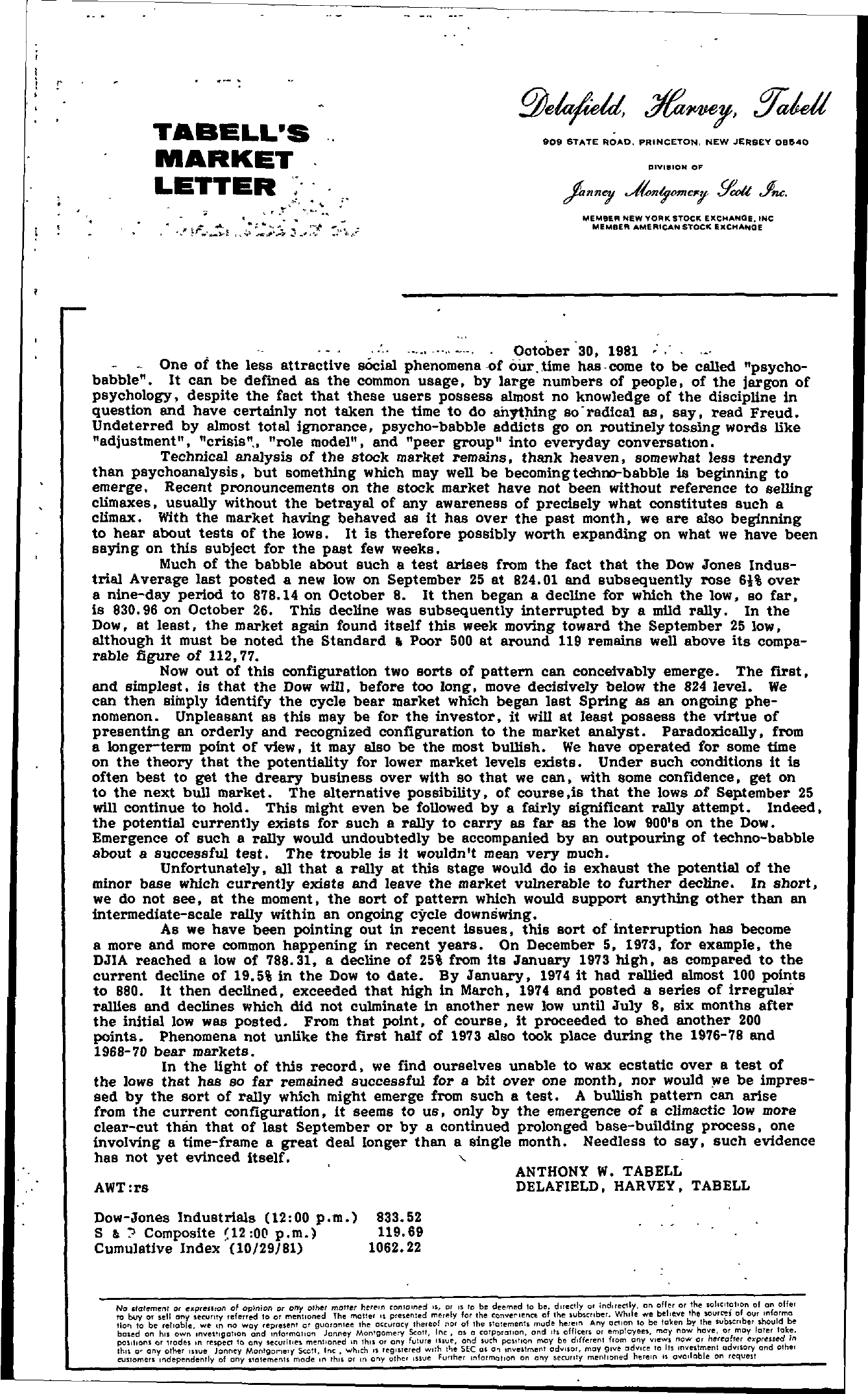 TABELL'S MARKET LETTER 909 STATE ROAD, PRINCETON, NEW JERSEY OB540 DIVl810N OF MEM9EA NEW YORK STOCK EXCHANGE, INC MEMBER AMERICAN STOCK EXCHANGE ,.,. ………. -, Ootober 30. 1981 One of the less attractive sOcial phenomena of our, time has come to be called psycho- babble. It can be defined as the common usage. by large numbers of people. of the jargon of psychology. despite the fact that these users possess almost no knowledge of the discipline in question and have certainly not taken the time to do ahytJUng so' radical as. say. read Freud. Undeterred by almost total ignorance. psycho-babble addicts go on routinely tossing words like adjustment. crisis. role model. and peer group into everyday conversat10n. Technical analysis of the stock market remains. thank heaven. somewhat less trendy than psychoanalysis. but something which may well be becomingtechm-babble is beginning to emerge. Recent pronouncements on the stock market have not been without reference to selling climaxes. usually without the betrayal of any awareness of precisely what constitutes such a climax. With the market having behaved as it has over the past month. we are also beginning to hear about tests of the lows. It is therefore possibly worth expanding on what we have been saying on this subject for the past few weeks. Much of the babble about such a test arises from the fact that the Dow Jones Indus- trial Average last posted a new low on September 25 at 824.01 and subsequently rose 6l over a nine-day period to 878.14 on October 8. It then began a decline for which the low. so far. is 830.96 on October 26. This decline was subsequently interrupted by a mild rally. In the Dow. at least. the market again found itself this week moving toward the September 25 low. although it must be noted the Standard Poor 500 at around 119 remains well above its compa- rable figure of 112. 77. Now out of this configuration two sorts of pattern can conceivably emerge. The first. and simplest. is that the Dow will, before too long. move decisively below the 824 level. We can then siinply identify the cycle bear market which began last Spring as an ongoing phe- nomenon. Unplessant as this may be for the investor. it will at least possess the virtue of presenting an orderly and recognized configuration to the market analyst. Paradoxically. from a longer-term point of view. it may also be the most bullish. We have operated for some time on the theory that the potentiality for lower market levels exists. Under such conditions it is often best to get the dreary business over with so that we can. with some confidence. get on to the next bull market. The alternative possibility. of course .is that the lows Df Selltember 25 will continue to hold. This might even be followed by a fairly significant rally attempt. Indeed. the potential currently exists for such a rally to carry as far as the low 900's on the Dow. Emergence of such a rally would undoubtedly be accompanied by an outpouring of techno-babble about a successful test. The trouble is it wouldn't mean very much. Unfortunstely. all that a rally at this stage would do is exhaust the potential of the minor base which currently exists and leave the market vulnerable to further decline. In short. we do not see. at the moment. the sort of pattern Which would support anything other than an intermediate-scale rally within an ongoing cycle downswing. . As we have been pointing out in recent issues. this sort of interruption has become a more and more common happening in recent years. On December 5. 1973. for example. the DJIA reached a low of 788.31. a decline of 25 from its January 1973 high. as compared to the current decline of 19.5 in the Dow to date. By January. 1974 it had rallied almost 100 points to 880. It then declined, exceeded that high in March. 1974 and posted a series of irregular rallies and declines which did not culminate in another new low until July 8. six months after the initial low was posted. From that point, of course. it proceeded to shed another 200 points. Phenomena not unlike the first half of 1973 also took plsce during the 1976-78 and 1968-70 bear markets. In the light of this record. we Imd ourselves unable to wax ecstatic over a test of the lows that has so far remained successful for a bit over one month. nor would we be impres- sed by the sort of rally which might emerge from such a test. A bullish pattern can arise from the current configuration. it seems to us. only by the emergence of a climactic low more clear-cut than that of last September or by a continued prolonged base-building process. one involving a time-frame a great deal longer than a single month. Needless to say. such evidence has not yet evinced itself. '- ANTHONY W. TABELL AWTrs DELAFIELD. HARVEY. TAB ELL Dow-Jones Industrials (12 00 p.m.) 833.52 Sill Composite 12 00 p.m.) 119.69 Cumulative Index (10/29/81) 1062.22 No Itatmel'H or .-preUfOn of opinion or ony other motter hereu'! cMomed IS, or ,s to be deemlld 10 be, dIrectly or Indorec1ly, on offer or the OhCIIllon of on offer to buy or ,ell ony secunty referred 10 or mentioned The motler ., presented merely for the Conver-Iena of Ihe lubs(rtber. While we belle.ve the 5Ourte5 of aUf Informo tlo to be relloble we In no way represent or guarantee Ihe ocwraey Ihereof nor of Ihe slClements mude hereIn Any Cc110rt to be loken by the subTlber should be bo'ed on hIS own',nlle\gohon and InformOllon Janney Montgomery Scott, Ine, 0 a (Orporailon, and ,ts officers or employees, may now halle, or may loter loke, pohonl or Hodes In respec1 to ony secudtles menhoned In thllo or any future litUe, and Iouch pOSItIon may be dIfferent 1rom ony IIlews now or MereD/ter e.-pressed in thl' o. any OlMf alue Janney Monlgo,..,II'y Sectt, Inc, wh,ch II regIstered w,h ,e SEC 01 0'1 .nvellment odv,sor, may give adVice 10 lis mveltmenl odllilory and other tuSlome!S Independently of any S10tetTlenh mode In In or on any olhcr ,Slue ufTner tnformlJllon on ony ecurtly mentioned herein II aVaIlable on reqvest