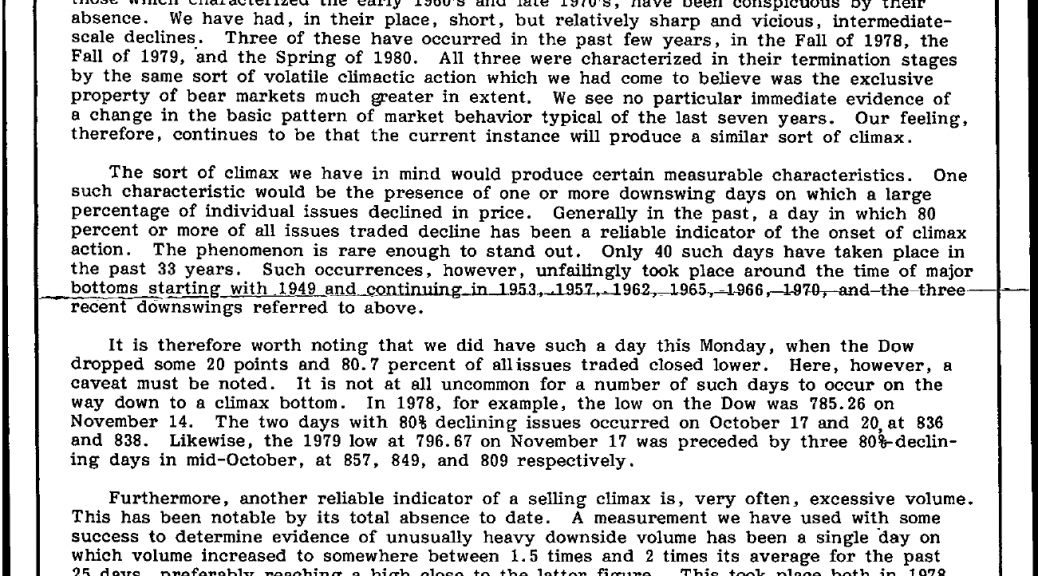 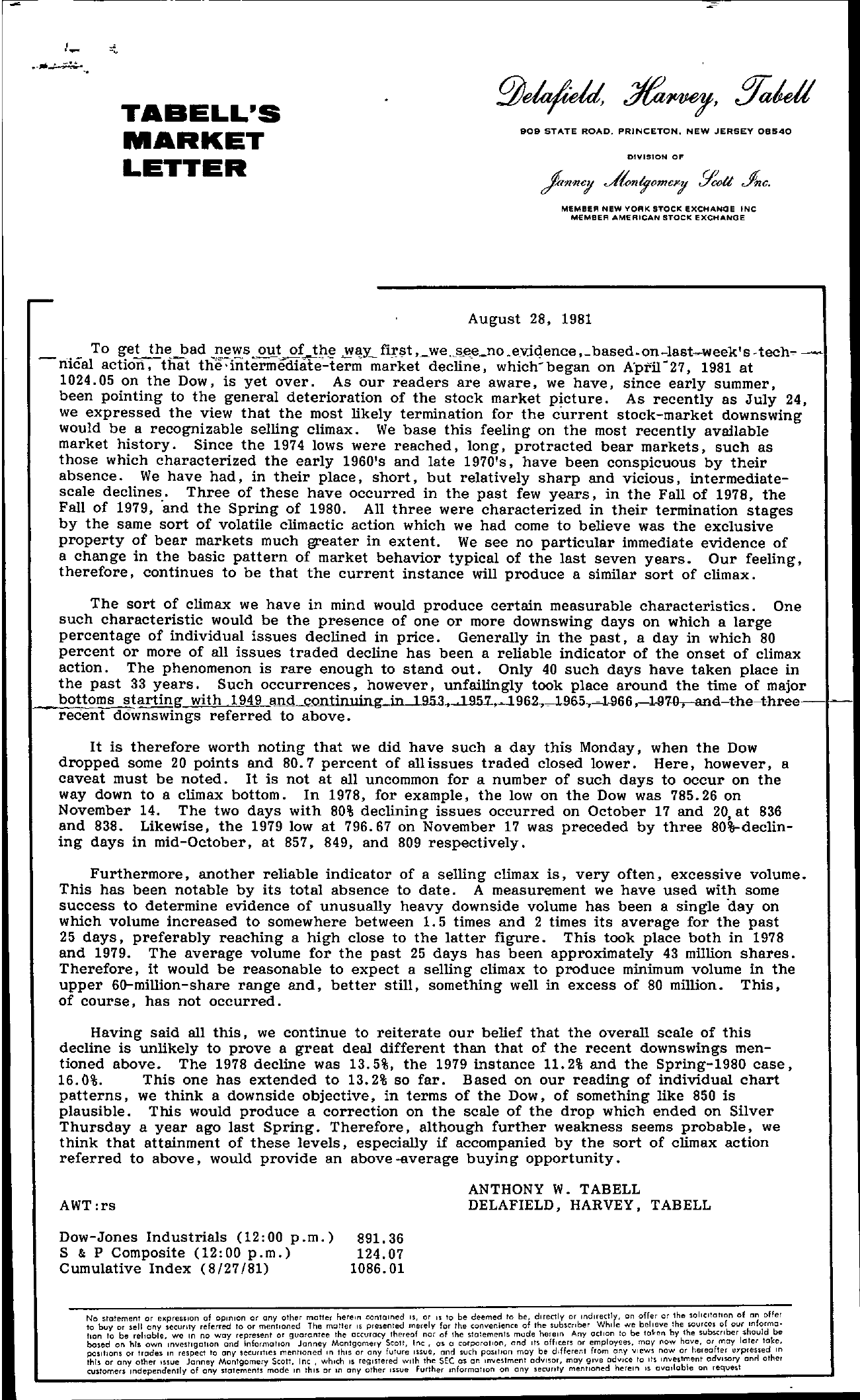 TABELL'S MARKET LETTER 909 STATE ROAD, PRINCETON. NEW JERSEY 08540 DIVISION OF MEMBER NEW YORK STOCK EXCHANGE INC MEMBER AMERICAN STOCK EXCHANGE August 28, 1981 . To gee..Ead neys Ol!t.. of th.) y fi!t ,we …..eeno .evidence, based. on-last-week' s .tech- mcal action. that the-intermediate-term market decline. which-began on A'pril-27. 1981 at 1024.05 on the Dow. is yet over. As our readers are aware. we have. since early summer, been pointing to the general deterioration of the stock market picture. As recently as July 24. we expressed the view that the most likely termination for the current stock-market downswing would be a recognizable selling climax. We base this feeling on the most recently available market history. Since the 1974 lows were reached. long. protracted bear markets. such as those which characterized the early 1960's and late 1970's. have been conspicuous by their absence. We have had. in their place. short. but relatively sharp and vicious, intermediatescale declines. Three of these have occurred in the past few years. in the Fall of 1978, the Fall of 1979. and the Spring of 1980. All three were characterized in their termination stages by the same sort of volatile climactic action which we had come to believe was the exclusive property of bear markets much greater in extent. We see no particular immediate evidence of a change in the basic pattern of market behavior typical of the last seven years. Our feeling. therefore. continues to be that the current instance will produce a similar sort of climax. The sort of climax we have in mind would produce certain measurable characteristics. One such characteristic would be the presence of one or more downswing days on which a large percentage of individual issues declined in price. Generally in the past, a day in which 80 percent or more of all issues traded decline has been a reliable indicator of the onset of climax action. The phenomenon is rare enough to stand out. Only 40 such days have taken place in the past 33 years. Such occurrences. however. unfailingly took place around the time of major bottoms starting with .1949 and cmilirurin.ginJ.95.3.-1.95'Z.r-1962,,1-966 .-l-9'10,-and-t-he-t-hree recent downswings referred to above. It is therefore worth noting that we did have such a day this Monday. when the Dow dropped some 20 points and 80.7 percent of allissues traded closed lower. Here. however, a caveat must be noted. It is not at all uncommon for a number of such days to occur on the way down to a climax bottom. In 1978, for example, the low on the Dow was 785.26 on November 14. The two days with 80 declining issues occurred on October 17 and 20, at 836 and 838. Likewise, the 1979 low st 796.67 on November 17 was preceded by three 80-declining days in mid-October. at 857, 849, and 809 respectively. Furthermore, another reliable indicator of a selling climax is, very often, excessive volume. This has been notable by its total absence to date. A measurement we have used with some success to determine evidence of unusually heavy downside volume has been a single day on which volume increased to somewhere between 1. 5 times and 2 times its average for the past 25 days, preferably reaching a high close to the latter figure. This took place both in 1978 and 1979. The average volume for the past 25 days has been approximately 43 million shares. Therefore. it would be reasonable to expect a selling climax to produce minimum volume in the upper 6million-share range and, better still, something well in excess of 80 million. This, of course, has not occurred. Having said all this, we continue to reiterate our belief that the overall scale of this decline is unlikely to prove a great deal different than that of the recent downswings men- tioned above. The 1978 decline was 13.5. the 1979 instance 11. 2 and the Spring-1980 case, 16.0. This one has extended to 13.2 so far. Based on our reading of individual chart patterns, we think a downside objective, in terms of the Dow, of something like 850 is plausible. This would produce a correction on the scale of the drop which ended on Silver Thursday a year ago last Spring. Therefore, although further weakness seems probable, we think that attainment of these levels, especially if accompanied by the sort of climax action referred to above, would provide an above -average buying opportunity. AWT rs ANTHONY W. T ABELL DELAFIELD, HARVEY, TAB ELL Dow-Jones Industrials (1200 p.m.) 891.36 S & P Composite (1200 p.m.) 124.07 Cumulative Index (8/27/81) 1086.01 No statemenT or expresSion of opinion or any other moIler here, contained IS, or IS 10 be deemed to be, directly or Indirectly, on offer or Ihe solicllotlOn of on offer To buy or sell any seCUriTy referred to or menhoned The matter IS presented merely for the convenlenCf of Ihe subSCriber While we believe the sources ef our Informo- han to. be reliable we In no way represent or guarantee the accuracy thereof ncr of the statements mude herein Any action to. be toen by the subscriber hould be based on his own 'lnvestlgallcn and Information Janney Montgomery SCCII, Inc, cs a corporation, ond Its offlcer or employee, may now have, cr may later toke, pCSlhons cr trades In respect to any seCUrities mentlened In thiS ar any future Issue, and such pasltlan may be different frem any views new er hereafter c1 p ressed ln this or any other Issue Janney Montgomery Scott, Inc, which IS regiSTered With the SEC as on Investment adVisor, may give adVice to. Its Investment adVisory anrl at hel customers Independently of any staTements mode In thiS or In any other Issue Further ,fermatlon on any seCIJtlty mentlel'led herem IS available on request