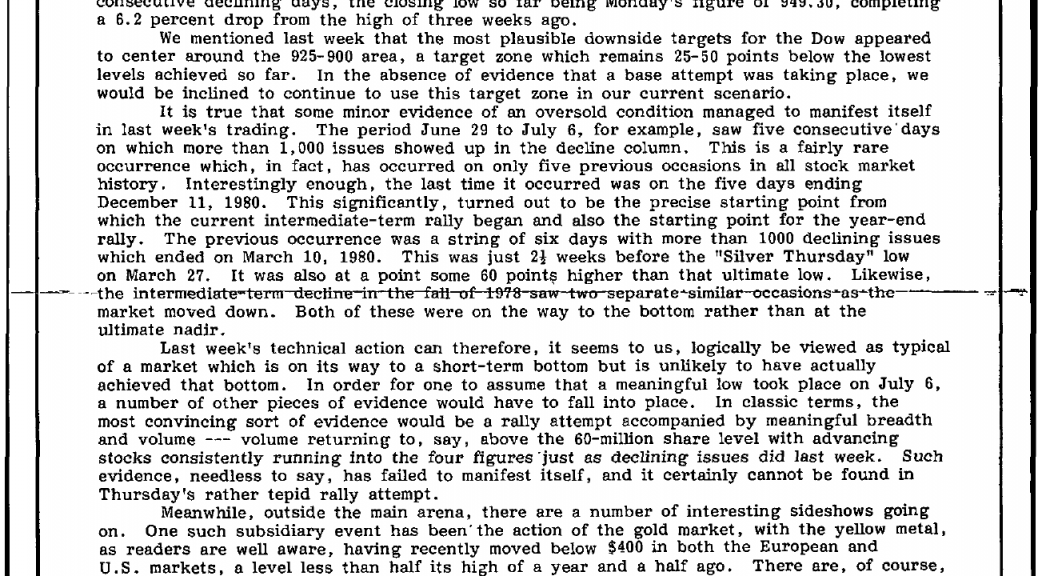 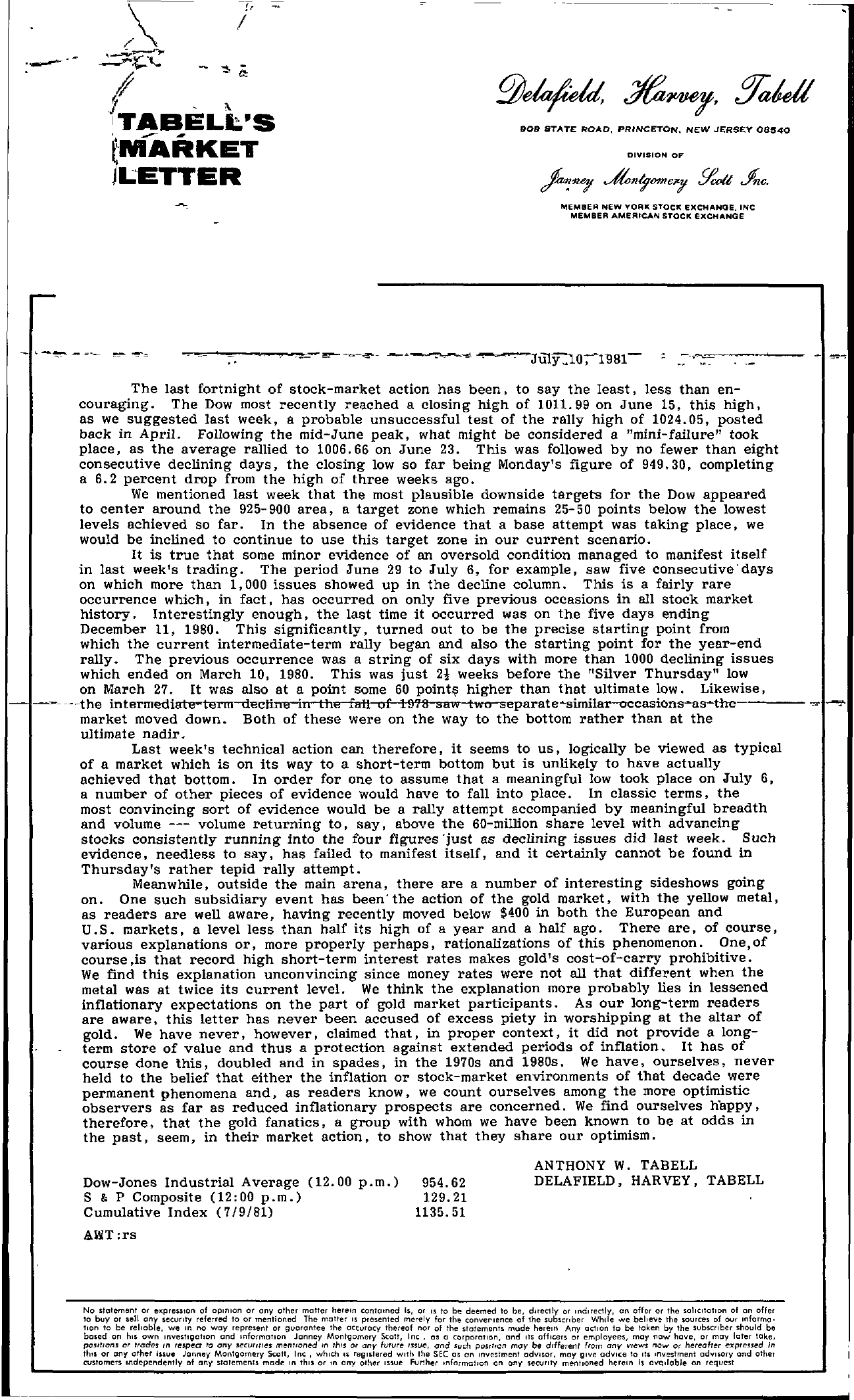 ..- , 909 STATE ROAD, PRINCETON. NEW JERSEY 08540 DIVISION OF' MEMBER NEW VORK STOCK EXCHANGE, INC MEMBER AMERICAN STOCI( eXCHANGE The last fortnight of stock-market action has been, to say the least, less than encouraging. The Dow most recently reached a closing high of 1011.99 on June 15, this high, as we suggested last week, a probable unsuccessful test of the rally high of 1024.05, posted back in April. Following the mid-June peak, what might be considered a mini-failure took place, as the average rallied to 1006.66 on June 23. This was fOllowed by no fewer than eight consecutive declining days, the closing low so far being Monday's figure of 949.30, completing a 6.2 percent drop from the high of three weeks ago. We mentioned last week that the most plausible downside targets for the Dow appeared to center around the 925-900 area, a target zone which remains 25-50 points below the lowest levels achieved so far. In the absence of evidence that a base attempt was taking place, we would be inclined to continue to use this target zone in our current scenario. It is true that some minor evidence of an oversold condition managed to manifest itself in last week's trading. The period June 29 to July 6, for example, saw five consecutive' days on which more than 1,000 issues showed up in the decline column. This is a fairly rare occurrence which, in fact, has occurred on only five previous occasions in all stock market history. Interestingly enough, the last time it occurred was on the five days ending December 11, 1980. This significantly, turned out to be the precise starting point from which the current intermediate-term rally began and also the starting point for the year-end rally. The previous occurrence was a string of six days with more than 1000 declining issues which ended on March 10, 1980. This was just 2! weeks before the Silver Thursday low on March 27. It was also at a point some 60 point higher than that ultimate low. Likewise, – —–the intermediate-tellil decline-;,rrthe-fatl–of–19'f8-saeparatesimilar–occasionsasthe – – – – — . market moved down. Both of these were on the way to the bottom rather than at the ultimate nadir. Last week's technical action can therefore, it seems to us, logically be viewed as typical of a market which is on its way to a short-term bottom but is unlikely to have actually achieved that bottom. In order for one to assume that a meaningful low took place on July 6, a number of other pieces of evidence would have to fall into place. In classic terms, the most convincing sort of evidence would be a rally attempt accompanied by meaningful breadth and volume — volume returning to, say, above the 60-million share level with advancing stocks consistently running into the four figures -just as declining issues did last week. Such evidence, needless to say, has failed to manifest itself, and it certainly cannot be found in Thursday's rather tepid rally attempt. Meanwhile, outside the main arena, there are a number of interesting sideshows going on. One such subsidiary event has been' the action of the gold market, with the yellow metal, as readers are well aware, having recently moved below 400 in both the European and U.S. markets, a level less than half its high of a year and a half ago. There are, of course, various explanations or, more properly perhaps, rationalizations of this phenomenon. One,of course ,is that record high short-term interest rates makes gold's cost-of-carry prohibitive. We find this explanation unconvincing since money rates were not all that different when the metal was at twice its current level. We think the explanation more probably lies in lessened inflationary expectations on the part of gold market participants. As our long-term readers are aware, this letter has never been accused of excess piety in worshipping at the altar of gold. We have never, however, claimed that, in proper context, it did not provide a longterm store of value and thus a protection against extended periods of inflation. It has of course done this, doubled and in spades, in the 1970s and 1980s. We have, ourselves, never held to the belief that either the inflation or stock-market environments of that decade were permanent phenomena and, as readers know, we count ourselves among the more optimistic observers as far as reduced inflationary prospects are concerned. We find ourselves happy, therefore, that the gold fanatics, a group with whom we have been known to be at odds in the past, seem, in their market action, to show that they share our optimism. Dow-Jones Industrial Average (12.00 p.m.) S & P Composite (1200 p.m.) Cumulative Index (7/9/81) AWT rs 954.62 129.21 1135.51 ANTHONY W. TABELL DELAFIELD, HARVEY, TABELL No stotement or eXpreS5jon of Opinion or any other mafler herein contomed is, or 1 10 be deemed to be, dlrcC'lly or 'nd,reC'!ly, on offer or the sollcltotlon of an offer to buy or sell ony ccunly referred to or mentioned The matter IS presented merely for the converlence of the subsmber While we believe the Ources of our information to be reliable, we In no way represent or guoronlee the accuracy thereof nor of the statements mode herein Any acTion to be tak.en by the subscriber should be based on hiS own investigation and information Janney Montgomery Scott, Inc, as a corporation, and Its officers or employees, moy now have, or may later tok.e, pontlons or trades If! respect to any secur/Ws mentioned 1M thiS or any future Issue, and such POSitIon may be different from ony views now or hereafter e;.pressed In thIS or any other issue Janney Montgomery Scalf, Inc, which .s registered wllh the SEC as on Investment adVISor, moy give adVice to Its Investment advlOry and olhel customers .ndependently of any stotemenls mode .n thiS or In any other Issue Furlher information on any security mentioned herein Is available on request