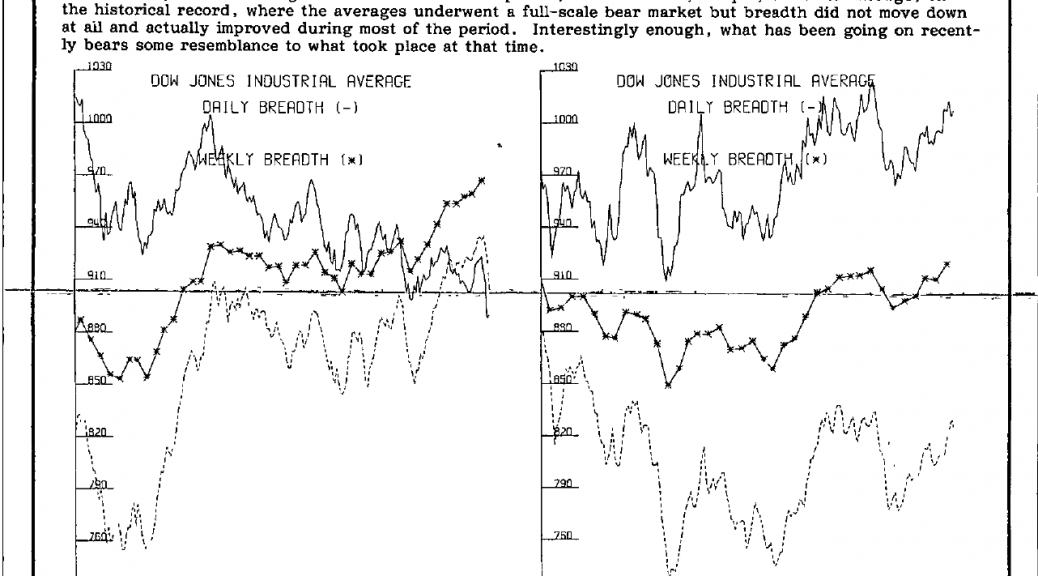 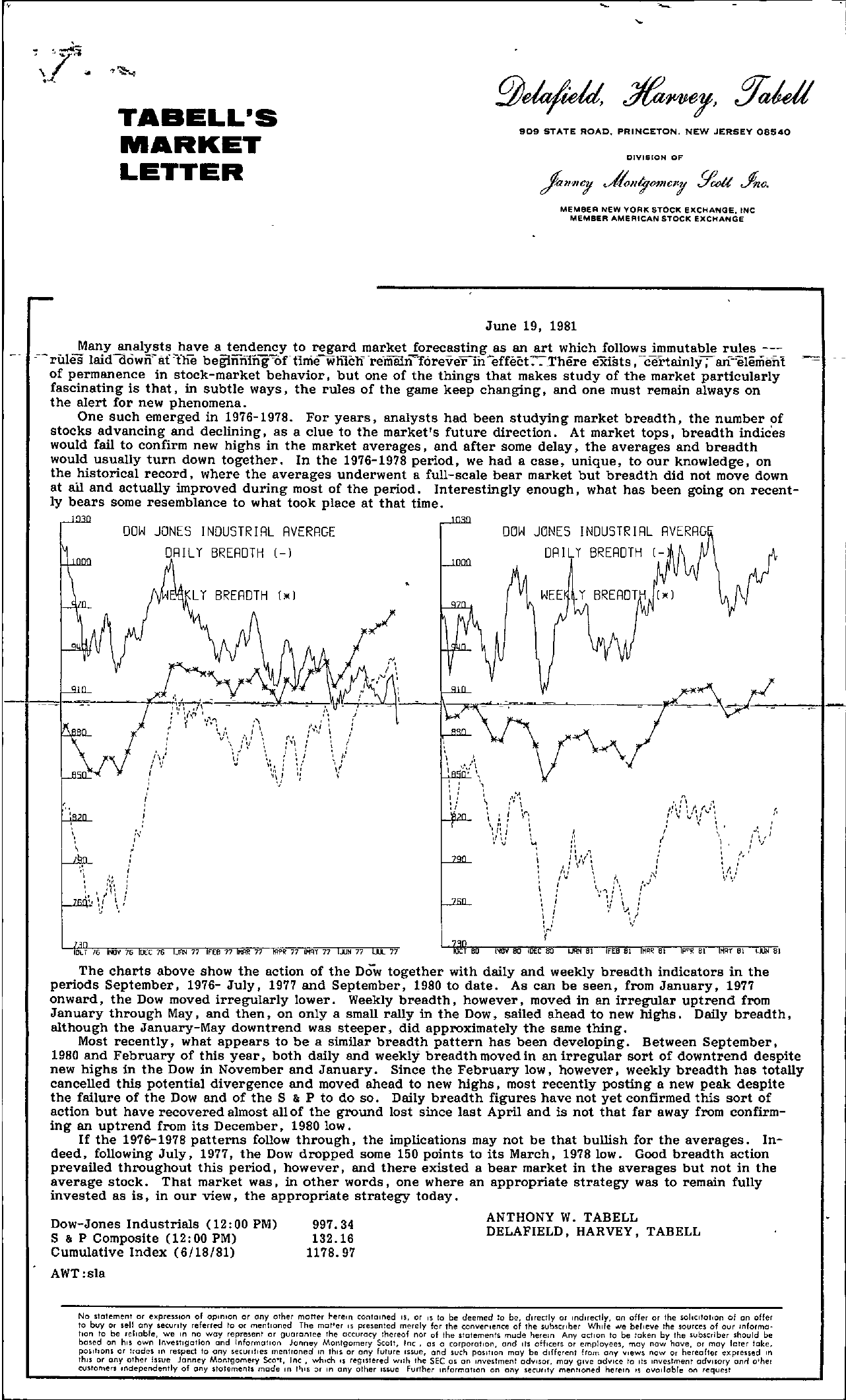 TABELL'S MARKET LETTER I 909 STATE ROAD, PRINCETON. NEW JERSEY 08540 DIVISION OF MEMeeR New VORK STOCK eXCHANGE, INC MEMBER AMERICAN STOCK EXCHANGe June 19, 1981 Many analysts have a tendency to regard market forecasting as an art which follows immutable rules — rules laidaown- at 'too beginnIng -of tlniewniclf -remainf6rever iil-effectThere eXists, -certainlY;-an-'i!lement of permanence in stock-market behavior, but one of the things that makes study of the market particularly faSCinating is that, in subtle ways, the rilles of the game keep changing, and one must remain always on the alert for new phenomena. One such emerged in 1976-1978. For years, analysts had been studying market breadth, the number of stocks advancing and declining, as a clue to the market's future direction. At market tops, breadth indic'es would fail to confirm new highs in the market averages, and after some delay, the averages and breadth would usually turn down together. In the 1976-1978 period, we had a case, unique, to our knowledge, on the historical record. where the averages underwent a full-scale bear market but breadth did not move down at ail and actually improved during most of the period. Interestingly enough, what has been going on recently bears some resemblance to what took place at that time. DOW JONES INDUSTRIRL RVERRGE DOW JONES INDUSTRIRL RVERRG DRILl BRERDTH I-I U BRERDTH I.I ., (' t,/; ,. ,r,\\J' I . \l ' l – .. , \ '; i ,. , \ , ,I ' , , i\ ,, 11\I'I ,'11 'i \\ \ ,'\ , ,!I.'Vv/,I/\,. /\ \ ' i, I ' , ,t\ ,; ! .'.-. t' ,/, , ' ,/ \, 1,'1, ' . I , ,!I '. /oJ',) f' n nLT 16 76 C 76 FEB 77 I1AR 71 Y 77 .AJN 77 77 T BO 'IOV 80 DEC 80 81 FEB 81 H; 81 PR 81 r 81 .LIN 81 The charts above show the action of the Dow together with daily and weekly breadth indicators in the periods September, 1976- July, 1977 and September, 1980 to date. As can be seen, from January, 1977 onward, the Dow moved irregularly lower. Weekly breadth, however, moved in an irregular uptrend from January through May, and then, on only a small rally in the Dow, sailed ahead to new highs. Daily breadth, although the January-May downtrend was steeper, did approximately the same thing. Most recently, what appears to be a similar breadth pattern has been developing. Between September, 1980 and February of this year, both daily and weekly breadth moved in an irregular sort of downtrend despite new highs in the Dow in November and January. Since the February low, however, weekly breadth has totally cancelled this potential divergence and moved ahead to new highs, most recently posting a new peak despite the failure of the Dow and of the S & P to do so. Daily breadth figures have not yet confirmed this sort of action but have recovered almost all of the ground lost since last April and is not that far away from confirming an uptrend from its December, 1980 low. If the 1976-1978 patterns follow through, the implications may not be that bullish for the averages. In- deed. following July, 1977, the Dow dropped some 150 points to its March, 1978 low. Good breadth action prevailed throughout this period, however, and there existed a bear market in the averages but not in the average stock. That market was. in other words, one where an appropriate strategy was to remain fully invested as is, in our view, the appropriate strategy today. Dow-Jones Industrials (12 00 PM) S & P Composite (1200 PM) Cumulative Index (6/18/81) 997.34 132.16 1178.97 ANTHONY W. TABELL DELAFIELD, HARVEY, TABELL AWTsIa No stclemenl or expreSSion of op'nion or any ather matter rereln contained IS, or IS to be deemed to be, directly or ,nd,rectly, on offer or the solICitation of on offer to buy or sell any security referred to or menlloned The mat'er IS presented merely for the converlena of the subscriber While we believe the sources of our m(ormo- tlon to be reliable, we In no way represent or guarantee the accuracy thereof nor of the statements mude herem Any aellon to be loken by the subscriber should be based on hiS own Investigation and Information Janney Montgomery ScOIl, 'nc, 05 a corporation, and Its officers or employees, may now have, or may later take, poslhons or trades 1M respect to any secuntles menhoned In thiS or any fulure Issue, ond such POSition may be different from any views now or hereafter expressed In thu or any other issue Jonney Montgomery Seo't, Inc, which IS registered With the SEC 05 on Investment odvlSor, may give adVice to Its Investment adVisory anrl o'her customer Independently of any statements made In r;ls r In any other Issue Further information on any securlly mentioned herein .s avoilable on request