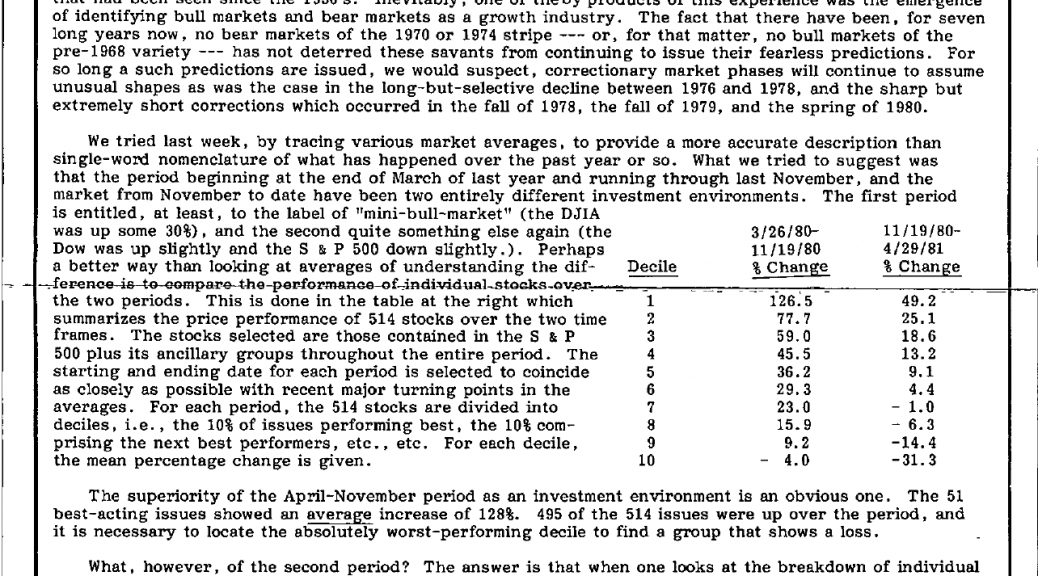 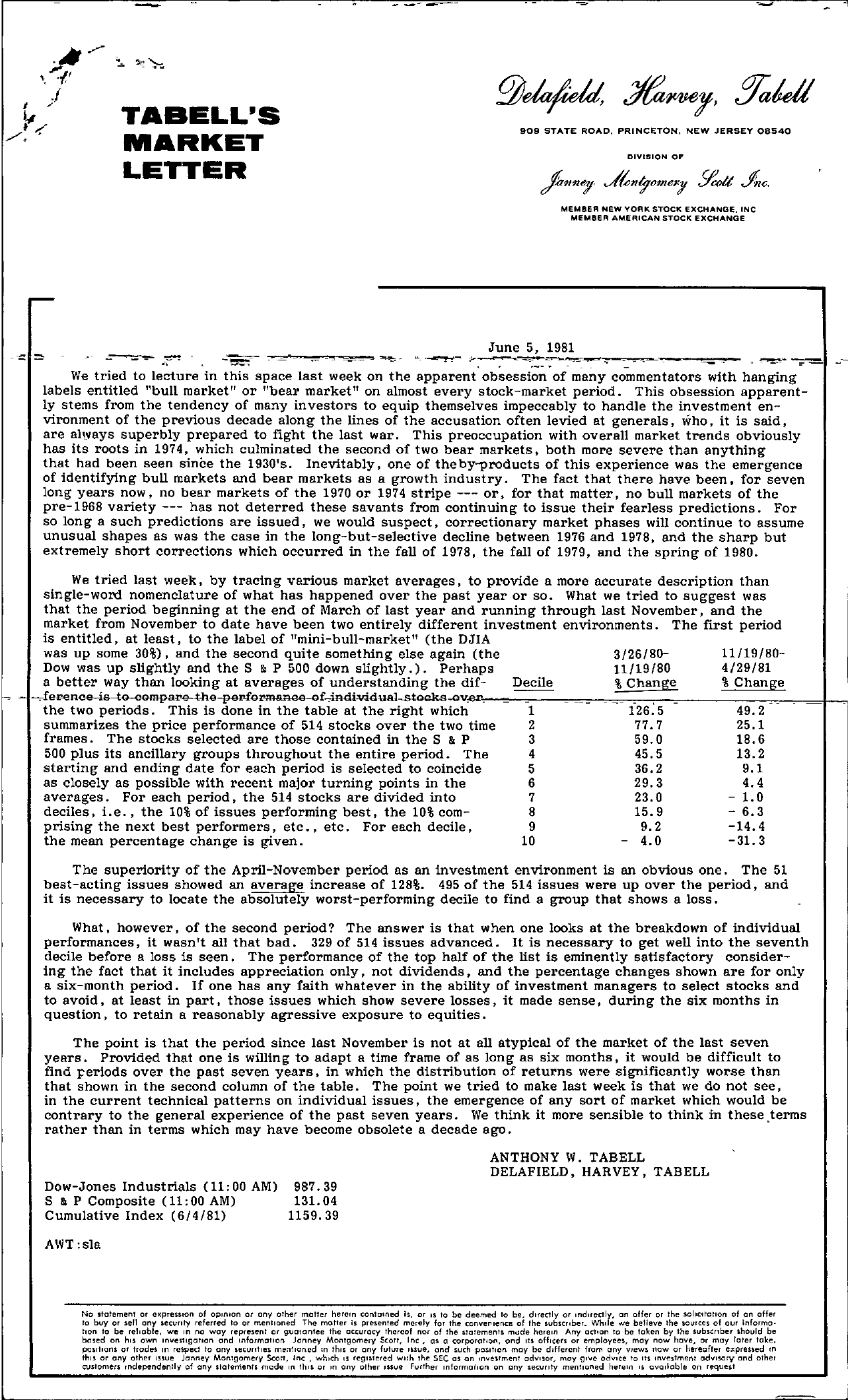 – TABELL'S MARKET LETTER 909 STATE ROAD, PRINCETON. NEW JERSEY 08540 DIVISION OF MEMBER NEW VOR' STOCK EXCHANGE, INC MEMBER AMERICAN STOCK EXCHANGE . r – – – ..- June 5, 1981 7, .-.. – We tried to lecture in this space last week on the apparent obsession of many commentators with hanging labels entitled bull market or bear market on almost every stock-market period. This obsession apparent- ly stems from the tendency of many investors to equip themselves impeccably to handle the investment en- vironment of the previous decade along the lines of the accusation often levied at generals, who, it is said, are always superbly prepared to fight the last war. This preoccupation with overall market trends obviously has its roots in 1974, which culminated the second of two bear markets, both more severe than anything that had been seen since the 1930's. Inevitably, one of the by-products of this experience was the emergence of identifying bull markets and bear markets as a growth industry. The fact that there have been, for seven long years now, no bear markets of the 1970 or 1974 stripe — or, for that matter, no bull markets of the pre-1968 variety — has not deterred these savants from continuing to issue their fearless predictions. For so long a such predictions are issued, we would suspect, correctionary market phases will continue to assume unusual shapes as was the case in the long-but-selective decline between 1976 and 1978, and the sharp but extremely short corrections which occurred in the fall of 1978, the fall of 1979, and the spring of 1980. We tried last week, by tracing various market averages, to provide a more accurate description than single-word nomenclature of what has happened over the past year or so. What we tried to suggest was that the period beginning at the end of March of last year and running through last November, and the market from November to date have been two entirely different investment environments. The first period is entitled, at least, to the label of mini-bull-market (the DJIA was up some 30), and the second quite something else again (the 3/26/80- 11/19/80- Dow was up slightly and the S & P 500 down slightly.). Perhaps 11/19/80 4/29/81 a better way than looking at averages of understanding the dif-. .–Decile.,,…;;Change ChangeJ – —–fer-en-ce-is–t-G-eGmpat!e–th)–per-for-maRce-of…Jn-di.vi-d-ualstoGk.sov..er the two periods. This is done in the table at the right which 1 f265 49.2 summarizes the price performance of 514 stocks over the two time 2 77.7 25.1 frames. The stocks selected are those contained in the S & P 3 59.0 18.6 500 plus its ancillary groups throughout the entire period. The 4 45.5 13.2 starting and ending date for each period is selected to coincide 5 36.2 9.1 as closely as possible with recent major turning points in the 6 29.3 4.4 averages. For each period, the 514 stocks are divided into 7 23.0 – 1. 0 deciles, i.e., the 10 of issues performing best, the 10 com- 8 15.9 – 6.3 prising the next best performers, etc., etc. For each decile, 9 9.2 -14.4 the mean percentage change is given. 10 4.0 -31.3 The superiority of the April-November period as an investment environment is an obvious one. The 51 best-acting issues showed an average increase of 128. 495 of the 514 issues were up over the period, and it is necessary to locate the absolutely worst-performing decile to find a group that shows a loss. What, however, of the second period The answer is that when one looks at the breakdown of individual performances, it wasn't all that bad. 329 of 514 issues advanced. It is necessary to get well into the seventh decile before a loss is seen. The performance of the top half of the list is eminently satisfactory considering the fact that it includes appreciation only, not dividends, and the percentage changes shown are for only a six-month period. If one has any faith whatever in the ability of investment managers to select stocks and to avoid, at least in part, those issues which show severe losses, it made sense, during the six months in question, to retain a reasonably agressive exposure to equities. The point is that the period since last November is not at all atypical of the market of the last seven years. Provided that one is willing to adapt a time frame of as long as six months, it would be difficult to find I'eriods over the past seven years, in which the distribution of returns were significantly worse than that shown in the second column of the table. The point we tried to make last week is that we do not see, in the current technical patterns on individual issues, the emergence of any sort of market which would be contrary to the general experience of the past seven years. We think it more sensible to think in these .terms rather than in terms which may have become obsolete a decade ago. Dow-Jones Industrials (1100 AM) 987.39 S & P Composite (11 00 AM) 131. 04 Cumulative Index (6/4/81) 1159.39 ANTHONY W. TABELL DELAFIELD, HARVEY, TAB ELL AWT sla No statement or expression of oplfllOn or any other matter herein tontolned Is, or IS 10 be deemed 10 be, directly or ind,rectly, on offer or the soliCitation of on offer to buy or sell any security referred to or mentioned The motter is presented merely for the convelIence of Ihe subscrlber While -He believe the sources of our informa- tion 10 be reliable, we In no way represent or guarantee the occurocy thereof nor of the stotemenls mude herein Any ochon to be token by the subSlrtber should be bOed on hiS own Investlgotlon and InformatIon Jonney Montgomery Scort, Inc, os 0 corporation, and Its offIcers or employees, moy now have, or moy tater take, pOSItions or trades In respect to any securitIes mentIoned In thiS or any future lSue, and such pOSition may be different from any views now or hereofter epreed In Ih,s or any olher Issue Janney Montgomery Scott, Inc, whICh IS reglllered With the SEC 0 on Investment odvlor, moy give adVice to Its Investment adVisory and other customers Independently of any slote,en!s made In Ihls or In any other lSue Furlher information on any securlly mentioned herein IS available on request