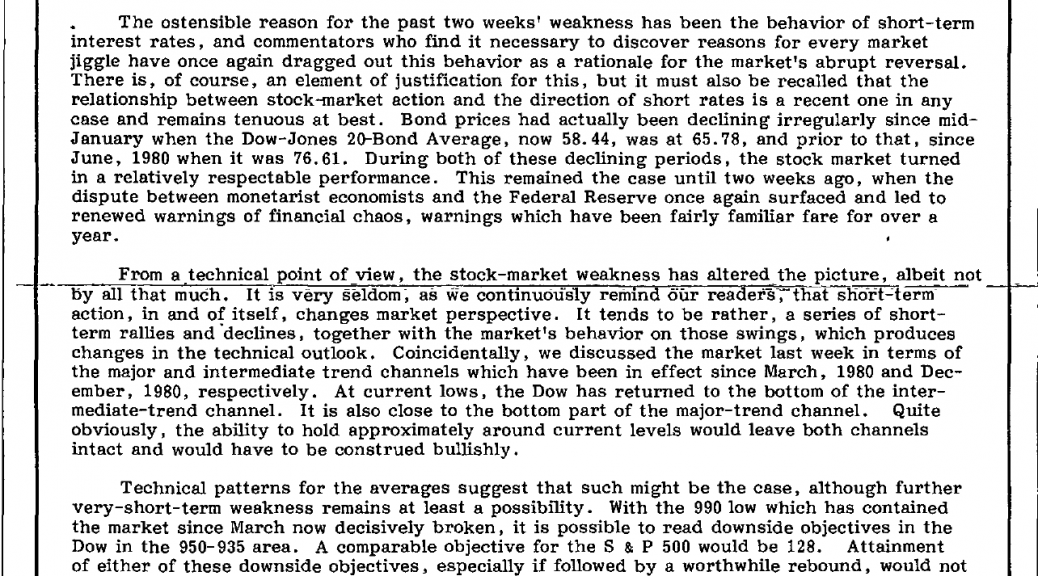 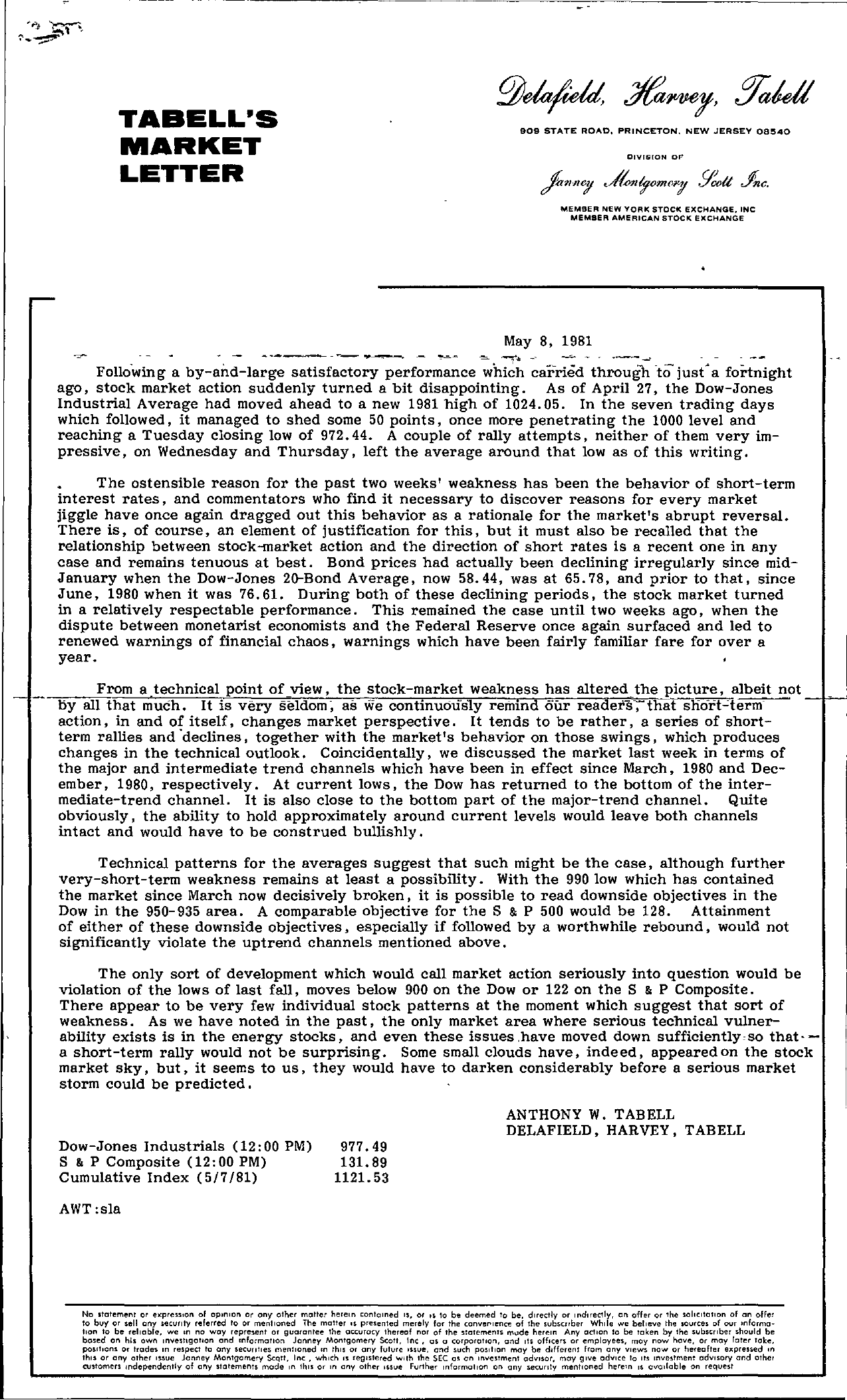 TABELL'S MARKET LETTER 909 STATE ROAD, PRINCETON. NEW JERSEY OBS40 DIYISION Of' MEMBER NEW YORK STOCK EXCHANGE. INC MEMBER AMERICAN STOCK eXCHANGE – May 8, 1981 -;0'- -,,,- '!'— .,j; Following a by-and-large satisfactory performance whih carried throught;) just' a fortnight ago, stock market action suddenly turned a bit disappointing. As of April 27, the Dow-Jones Industrial Average had moved ahead to a new 1981 high of 1024.05. In the seven trading days which followed, it managed to shed some 50 points, once more penetrating the 1000 level and reaching a Tuesday closing low of 972.44. A couple of rally attempts, neither of them very im- pressive, on Wednesday and Thursday, left the average around that low as of this writing. The ostensible reason for the past two weeks' weakness has been the behavior of short-term interest rates, and commentators who find it necessary to discover reasons for every market jiggle have once again dragged out this behavior as a rationale for the market's abrupt reversal. There is, of course, an element of justification for this, but it must also be recalled that the relationship between stock-market action and the direction of short rates is a recent one in any case and remains tenuous at best. Bond prices had actually been declining irregularly since midJanuary when the Dow-Jones 2o-Bond Average, now 58.44, was at 65.78, and prior to that, since June, 1980 when it was 76.61. During both of these declining periods, the stock market turned in a relatively respectable performance. This remained the case until two weeks ago, when the dispute between monetarist economists and the Federal Reserve once again surfaced and led to renewed warnings of financial chaos, warnings which have been fairly familiar fare for over a year. – From a technical point of view, the stock-market weakness has altered the picture, albeit not oy all that much. It is very seldom; as we continuous1y remind our readers, that snort term -p…-1 action, in and of itself, changes market perspective. It tends to be rather, a series of short- term rallies and'declines, together with the market's behavior on those swings, which produces changes in the technical outlook. Coincidentally, we discussed the market last week in terms of the major and intermediate trend channels which have been in effect since March, 1980 and Dec- ember, 1980, respectively. At current lows, the Dow has returned to the bottom of the inter- mediate-trend channel. It is also close to the bottom part of the major-trend channel. Quite obviously, the ability to hold approximately around current levels would leave both channels intact and would have to be construed bullishly. Technical patterns for the averages suggest that such might be the case, although further very-short-term weakness remains at least a possibility. With the 990 low which has contained the market since March now decisively broken, it is possible to read downside objectives in the Dow in the 950-935 area. A comparable objective for the S & P 500 would be 128. Attainment of either of these downside objectives, especially if followed by a worthwhile rebound, would not significantly violate the uptrend channels mentioned above. The only sort of development which would call market action seriously into question would be violation of the lows of last fall, moves below 900 on the Dow or 122 on the S & P Composite. There appear to be very few individual stock patterns at the moment which suggest that sort of weakness. As we have noted in the past, the only market area where serious technical vulnerability exists is in the energy stocks, and even these issues ,have moved down sufficiently,so that,a short-term rally would not be surprising. Some small clouds have, indeed, appeared on the stock market sky, but, it seems to us, they would have to darken considerably before a serious market storm could be predicted. Dow-Jones Industrials (1200 PM) 977.49 S & P Composite (1200 PM) 131. 89 Cumulative Index (5/7/81) 1121. 53 ANTHONY W. TAB ELL DELAFIELD, HARVEY, TAB ELL AWTsla No statement or expressIon of opinIon or any other motler hereIn contolned 1, or I to be deemed 10 be, directly or indirectly, on offer Of the soliCitation of an offer to buy or sell any security referred 10 or mentioned The molter ' presented merely for the corwerlen!;f'! of the subscrrber While we belIeve the lIOurces of our information to be reliable, we m no way represent or guaronlee the ourocy rhereof nor of the statemenTS mode herem Any action fa be token by the subsrlber should be bosed on his own investigation and !nformation Janney Montgomery Scali, Inc, as ( corporation, and Its offICers or employees, may now have, or may later lake, poSlhons or trades m respect to any SeCurities mentiOned m thiS or any future InUI!, and suh pOSition moy be different from any views now or hereafter elCpressed In thIS or any oTher Issue Janney Montgomery ScQrt, Inc, whICh IS registered with the SEC 0 an Investment adVisor, may give adVice to Its Investment adVISOry and othe! C\ntomers independently of any statements made In thiS or In any other Issue Further information on any seuflty mentIOned herem IS aVailable on request