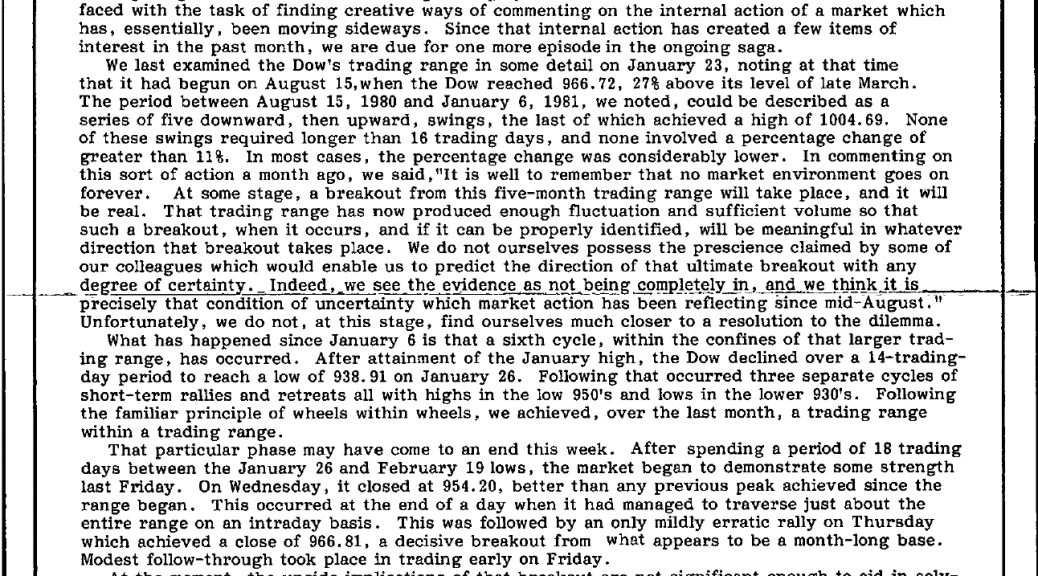 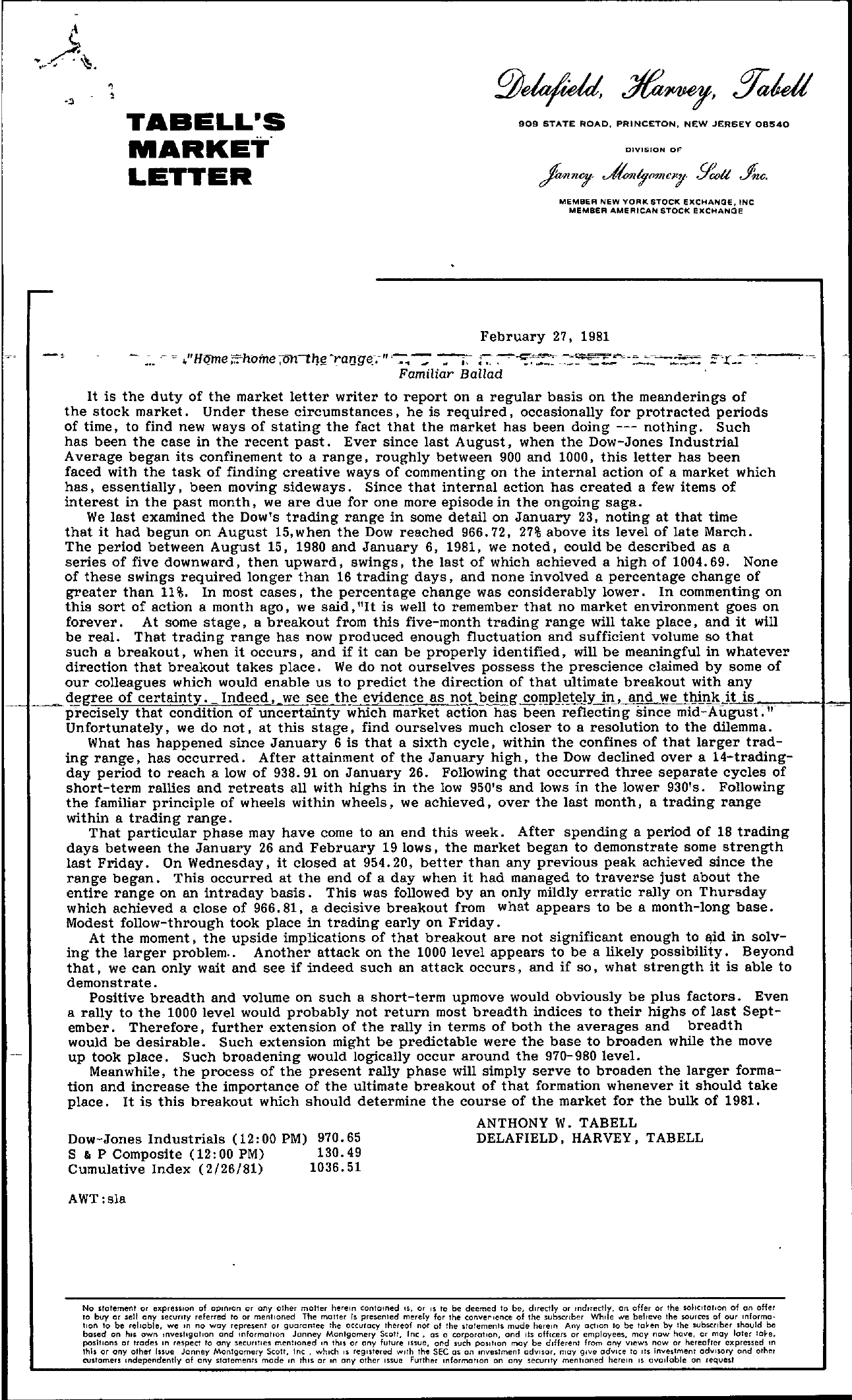 TABELL'S MARKEY' LETTER 909 STATE ROAD, PRINCETON, NEW JERSEY 08!540 DIVISION OF' MEMBER NEW YORK STOCK EXCHANoe, tNC MEMBER AMERICAN STOCK EXCHANQe February 27. 1981 —r- .. .- .HQ'me;-hi)ine'IJ.AalJgEr.-'7.— — ! ..—– Familiar Ballad z-.r— It is the duty of the market letter writer to report on a regular basis on the meanderings of the stock market. Under these circumstances. he is required. occasionally for protracted periods of time. to find new ways of stating the fact that the market has been doing — nothing. Such has been the case in the recent past. Ever since last August. when the Dow-Jones Industrial Average began its confinement to a range. roughly between 900 and 1000. this letter has been faced with the task of finding creative ways of commenting on the internal action of a market which has. essentially. been moving sideways. Since that internal action has created a few items of interest in the past month. we are due for one more episode in the ongoing saga. We last examined the Dow's trading range in some detail on January 23. noting at that time that it had begun on August 15.when the Dow reached 966.72. 27 above its level of late March. The period between August 15. 1980 and January 6. 1981. we noted. could be described as a series of five downward. then upward. swings. the last of which achieved a high of 1004.69. None of these swings required longer than 16 trading days. and none involved a percentage change of greater than 11 . In most cases. the percentage change was considerably lower. In commenting on this sort of action s month ago. we said. It is well to remember that no market environment goes on forever. At some stage. a breakout from this five-month trading range will take place. and it will be real. That trading range has now produced enough fluctuation and sufficient volume so that such a breakout. when it occurs. and if it can be properly identified. will be meaningful in whatever direction that breakout takes place. We do not ourselves possess the prescience claimed by some of our colleagues which would enable us to predict the direction of that ultimate breakout with any gree of certainty. Indeed. we see the evidence as noLbiIlg,co!,!pletely in, and we tlltl!),t-,i,sc.. –I precisely that condition of uncertainty which market action has been reflecting since mid-August. Unfortunately. we do not. at this stage. find ourselves much closer to a resolution to the dilemma. What has happened since January 6 is that a sixth cycle. within the confines of that larger trad- ing range. has occurred. After attainment of the January high. the Dow declined over a 14-tradingday period to reach a low of 938.91 on January 26. Following that occurred three separate cycles of short-term rallies and retreats all with highs in the low 950's and lows in the lower 930's. Following the familiar principle of wheels within wheels, we aChieved. over the last month. a trading range within a trading range. That particular phase may have come to an end this week. After spending a period of 18 trading days between the January 26 and February 19 lows. the market began to demonstrate some strength last Friday. On Wednesday, it closed at 954.20. better than any previous peak achieved since the range began. This occurred at the end of a day when it had managed to traverse just about the entire range on an intraday basis. This was followed by an only mildly erratic rally on Thursday which achieved a close of 966.81. a decisive breakout from what appears to be a month-long base. Modest follow-through took place in trading early on Friday. At the moment. the upside implications of that breakout are not significant enough to /lid in solving the larger problem,. Another attack on the 1000 level appears to be a likely possibility. Beyond that. we can only wait and see if indeed such an attack occurs. and if so. what strength it is able to demonstrate. Positive breadth and volume on such a short-term upmove would obviously be plus factors. Even a rally to the 1000 level would probably not return most breadth indices to their highs of last September. Therefore. further extension of the rally in terms of both the averages and breadth would be desirable. Such extension might be predictable were the base to broaden while the move up took place. Such broadening would logically occur around the 970-980 level. Meanwhile, the process of the present rally phase will simply serve to broaden the larger formation and increase the importance of the ultimate breakout of that formation whenever it should take place. It is this breakout which should determine the course of the market for the bulk of 1981. Dow-Jones Industrials (1200 PM) 970.65 S P Composite (1200 PM) 130.49 Cumulative Index (2/26/81) 1036.51 ANTHONY W. TABELL DELAFIELD. HARVEY. TABELL AWTsla No 'Iatemfmt or expression of opinion Qr any other motter herein contomed IS, or IS 10 be deemed to be, directly or indirectly, an offer or the sollcllollon of an offer 10 buy or sell any security referred to or mentioned Tile mailer 15 presented merely for the conver-Ience of the 5ubscnber While e belteve the sources of our Informo- tlon to be relloble, we ,n no woy represent or guarantee the accuracy thereof nor of the stotements mode herelll Any actIon 10 be taJ.-en by Ihe subSCriber should be based on h,s own mveshgotlon ond IIlformotlon Janney Montgomery Scolt, Inc, os 0 corporatIon, ond lis off,cers or employees, may now have, or may later laJ.-e, pos1tlons or trodes III respect to any SeCUritIes mentIoned In thIS or any future Issue, ond such posItIon may be d,fferent from ony vIews now or hereafter expressed In this or ony other Issue Jonney Montgomery Scott, Inc, whIch IS regIstered WIth the SEC as on Investment adVIsor, moy gIVe adVIce to Its Investment adVISOry and other customers ,ndependently of any statements mode In thIs or ,n any other Issue Further InformatIon on any security men honed herein IS ovalloble on request