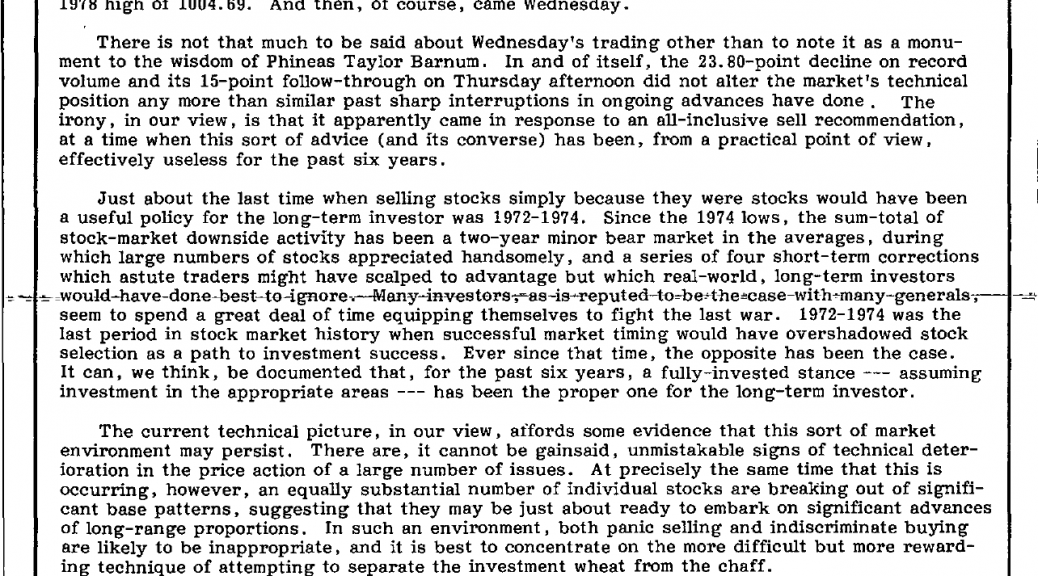 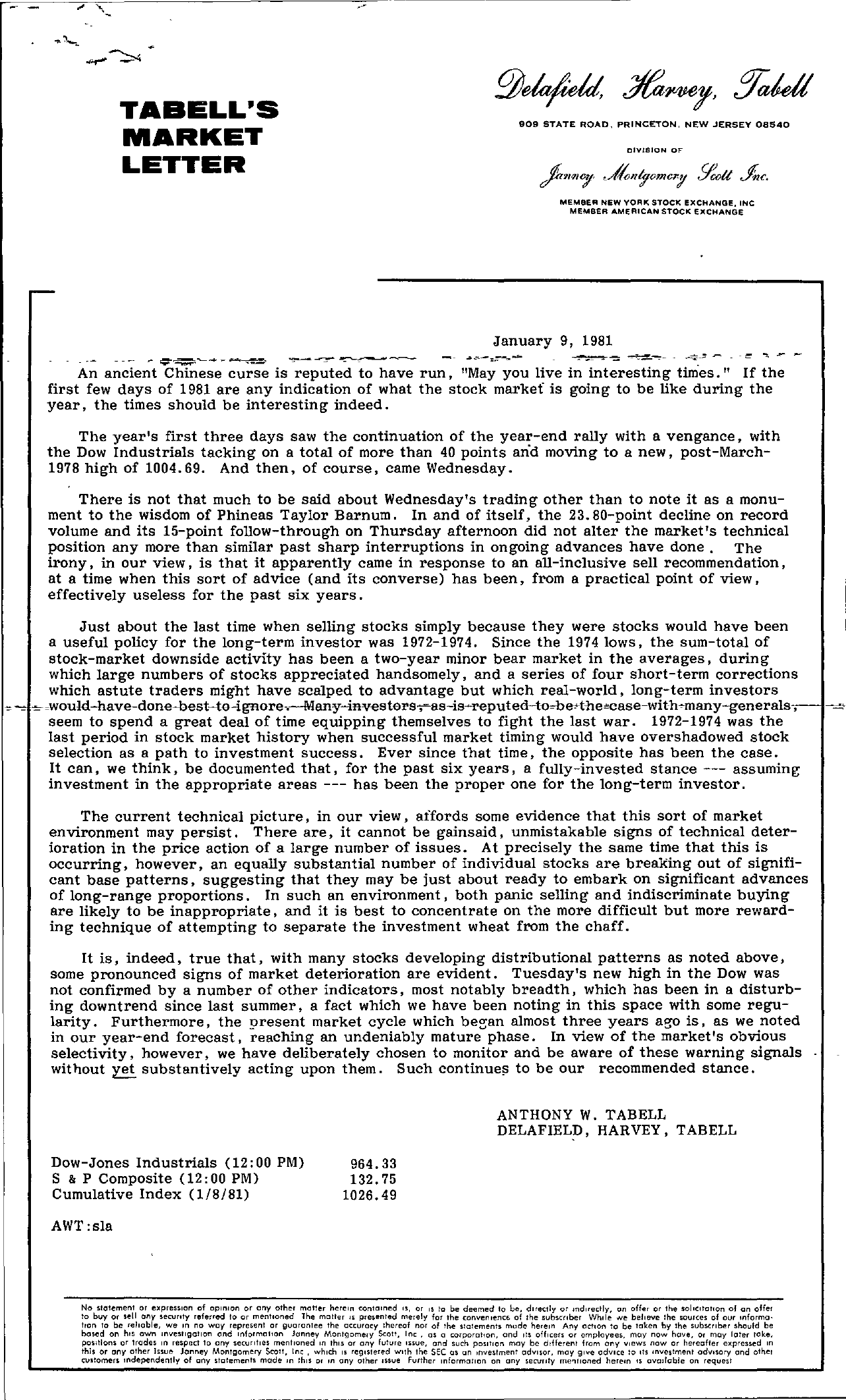 TABELL'S MARKET LETTER 909 STATE ROAD, PRINCETON, NEW JERSEY 08540 DIVISION OF MEMBER NEW VORK STOCK EXCHANGE. INC MEMBER AMERICAN STOCK eXCHANGE January 9, 1981 –.;o.- —- — .,.-.- ; – – -e An ancient Chinese curse is reputed to have run, May you live in interesting tim-es. If the first few days of 1981 are any indication of what the stock markef is going to be like during the year, the times should be interesting indeed. The year's first three days saw the continuation of the year-end rally with a vengance, with the Dow Industrials tacking on a total of more than 40 points and moving to a new, post-March1978 high of 1004.69. And then, of course, came Wednesday. There is not that much to be said about Wednesday's trading other than to note it as a monument to the wisdom of Phineas Taylor Barnum. In and of itself, the 23.80-point decline on record volume and its 15-point follow-through on Thursday afternoon did not alter the market's technical position any more than similar past sharp interruptions in ongoing advances have done. The irony, in our view, is that it apparently came in response to an all-inclusive sell recommendation, at a time when this sort of advice (and its converse) has been, from a practical point of view, effectively useless for the past six years. Just about the last time when selling stocks simply because they were stocks would have been a useful policy for the long-term investor was 1972-1974. Since the 1974 lows, the sum-total of stock-market downside activity has been a two-year minor bear market in the averages, during which large numbers of stocks appreciated handsomely, and a series of four short-term corrections which astute traders might have scalped to advantage but which real-world, long-term investors – owould-have-done-best-to-ignore-.—Many-investors,as-isreputed-toobethe.case-withmany-generals-,– — seem to spend a great deal of time equipping themselves to fight the last war. 1972-1974 was the I last period in stock market history when successful market timing would have overshadowed stock selection as a path to investment success. Ever since that time, the opposite has been the case. It can, we think, be documented that, for the past six years, a fully-invested stance — assuming investment in the appropriate areas — has been the proper one for the long-term investor. The current technical picture, in our view, affords some evidence that this sort of market environment may persist. There are, it cannot be gainsaid, unmistakable signs of technical deterioration in the price action of a large number of issues. At precisely the same time that this is occurring, however, an equally substantial number of individual stocks are breaking out of significant base patterns, suggesting that they may be just about ready to embark on significant advances of long-range proportions. In such an environment, both panic selling and indiscriminate buying are likely to be inappropriate, and it is best to concentrate on the more difficult but more rewarding technique of attempting to separate the investment wheat from the chaff. It is, indeed, true that, with many stocks developing distributional patterns as noted above, some pronounced signs of market deterioration are evident. Tuesday's new high in the Dow was not confirmed by a number of other indicators, most notably breadth, which has been in a disturbing downtrend since last summer, a fact which we have been noting in this space with some regu- larity. Furthermore, the o;resent market cycle which bee-an almost three years ago is, as we noted in our year-end forecast, reaching an undeniably mature phase. In view of the market's obvious selectivity, however, we have deliberately chosen to monitor and be aware of these warning signals without substantively acting upon them. Such continue to be our recommended stance. Dow-Jones Industrials (12 00 PM) S & P Composite (12 00 PM) Cumulative Index (1/8/81) AWTsla 964.33 132.75 1026.49 ANTHONY W. TABELL DELAFIELD, HARVEY, TABELL 01.No statement or expression of opinion or any other mot1er herein contomed IS, or IS to be deemed to be, directly or mdlrectly, on offer or the OIUllollon of an offer 10 buy or sell secuTlty referred 10 or mentioned The motter IS presented merely for the convenienCE; of the subSCriber While -Ne believe the sources of our Informa- han TO be reI lob e, we In no way represent or guarantee the accuracy Thereof nor of the statements mude herein Any actIOn To be token by The subscriber should be based an hiS own InvestlgoTlon and Informahon Janney Montgomery Scott, Inc, as a corporation, and Its officers or employees, may now have, or may later take, pOSitions or trades In respect to any seCUriTieS mentioned In thiS or any future Issue, ond such POSition may be different from any views now or hereafter expressed In this or any other Issue Janney Montgomery Scali, Inc, which 15 registered WITh the SEC as an Investment adVisor, may give adVice to Its Investment adVISOry and other nlliomers Independently of any staTements made In Thl5 or In any olher Issue Further information on any security me'ltloned herein 15 available on request