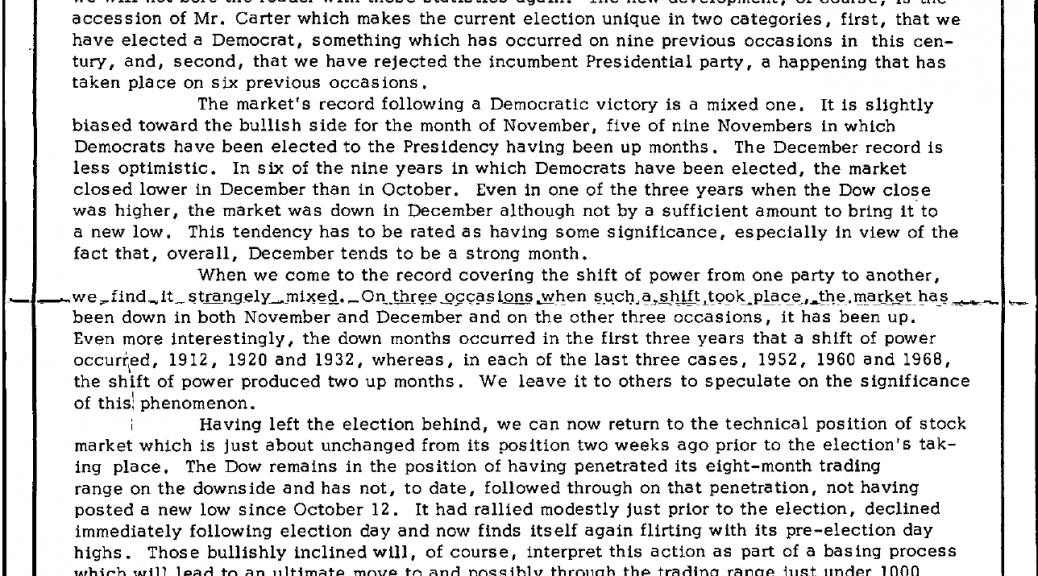 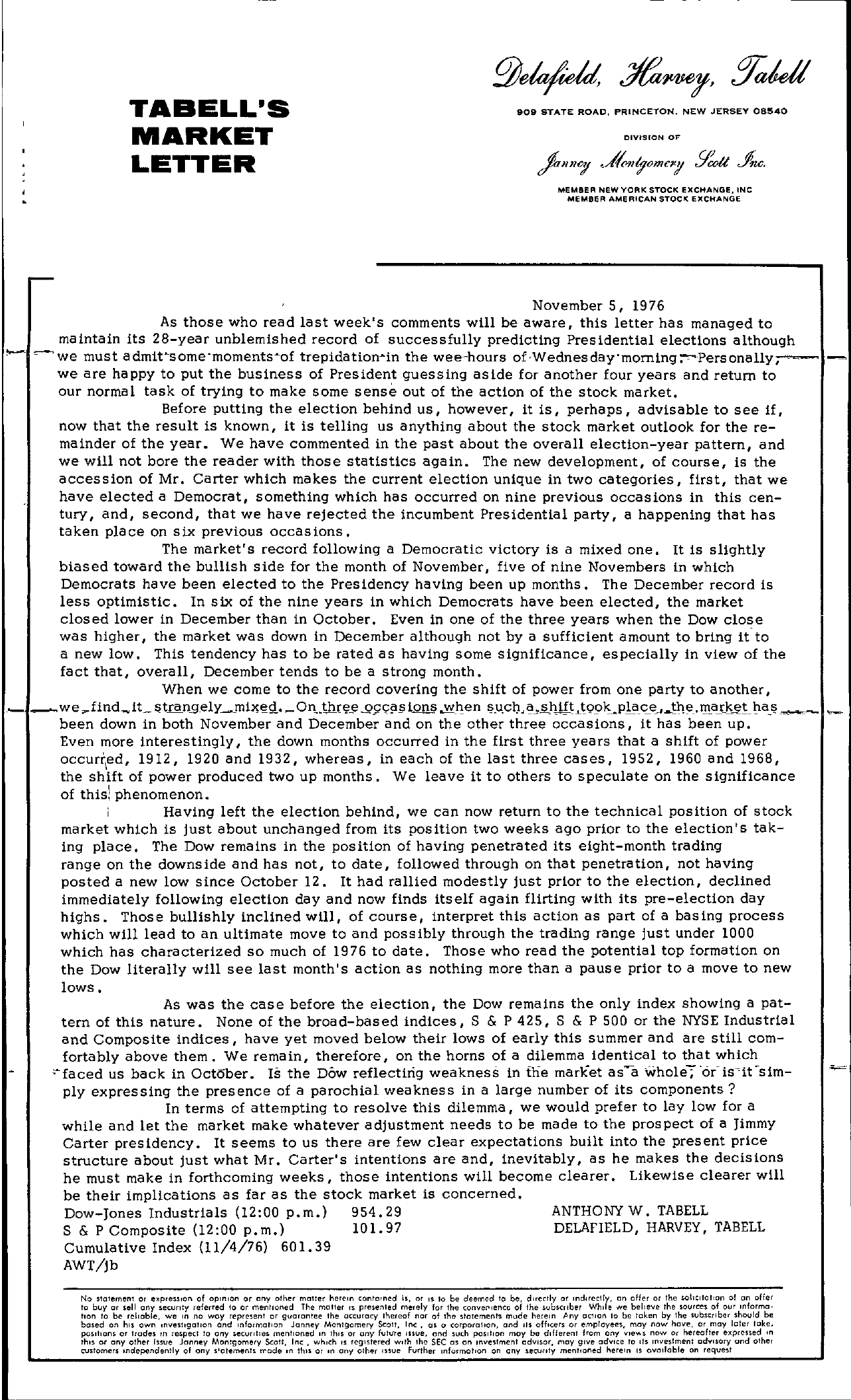 TABELL'S MARKET LETTER 909 STATE ROAC, PRINCETON. NEW JERSEY 08540 DIVISION OF MEMBER NEW VORK STOCK EXCHANGE, INC MEMBER AMERICAN STOCK eXCHANGE November 5, 1976 As those who read last week's comments will be aware, this letter has managed to maintain its 28-year unblemished record of successfully predicting Presidential elections although 'we must admit'some'momentsof trepidationin the wee–hours of-Wednesday'morningPersonally;— we are happy to put the business of President guessing aside for another four years and return to our normal task of trying to make some sense out of the action of the stock market. Before putting the election behind us, however, it is, perhaps, advisable to see if, now that the result is known, it is telling us anything about the stock market outlook for the re- mainder of the year. We have commented in the past about the overall election-year pattern, and we will not bore the reader with those statistics again. The new development, of course, is the accession of Mr. Carter which makes the current election unique in two categories, first, that we have elected a Democrat, something which has occurred on nine previous occasions in this cen- tury, and, second, that we have rejected the incumbent Presidential party, a happening that has taken place on six previous occasions. The market's record following a Democratic victory is a mixed one. It is slightly biased toward the bullish side for the month of November, five of nine Novembers in which Democrats have been elected to the Presidency having been up months. The December record is less optimistic. In six of the nine years in which Democrats have been elected, the market closed lower in December than in October. Even in one of the three years when the Dow close was higher, the market was down in December although not by a sufficient amount to bring it to a new low. This tendency has to be rated as having some Significance, especially in view of the fact that, overall, December tends to be a strong month. When we come to the record covering the shift of power from one party to another, we find it s trangelymixQ.. On.thr,e 29i!' ions -,hen suclJ. a!,hiftLt9Ikp!'lCeA!he. rna,rke! has been down in both November and December and on the other three occasions, it has been up. Even more interestingly, the down months occurred in the first three years that a shift of power occurr\ed, 1912, 1920 and 1932, whereas, in each of the last three cases, 1952, 1960 and 196B, the shift of power produced two up months. We leave it to others to speculate on the significance of this! phenomenon. Having left the election behind, we can now return to the technical position of stock market which is just about unchanged from its position two weeks ago prior to the election's tak- ing place. The Dow remains in the position of having penetrated its eight-month trading range on the downside and has not, to date, followed through on that penetration, not having posted a new low since October 12. It had rallied modestly just prior to the election, declined immediately following election day and now finds itself again flirting with its pre-election day highs. Those bullishly inclined will, of course, interpret this action as part of a basing process which will lead to an ultimate move to and possibly through the trading range just under 1000 which has characterized so much of 1976 to date. Those who read the potential top formation on the Dow literally will see last month's action as nothing more than a pause prior to a move to new lows. As was the case before the election, the Dow remains the only index showing a pat- tern of this nature. None of the broad-based indices, S & P 425, S & P 500 or the NYSE Industrial and Composite indices, have yet moved below their lows of early this summer and are still com- fortably above them. We remain, therefore, on the horns of a dilemma identical to that which 'faced us back in October. Is the Dow reflectirig weakness in Hie marKet asa whole;or'is-itsim- ply expressing the presence of a parochial weakness in a large number of its components In terms of attempting to resolve this dilemma, we would prefer to lay low for a while and let the market make whatever adjustment needs to be made to the prospect of a Jimmy Carter presidency. It seems to us there are few clear expectations built into the present price structure about just what Mr. Carter's intentions are and, inevitably, as he makes the decisions he must make in forthcoming weeks, those intentions will become clearer. Likewise clearer will be their implications as far as the stock market is concerned. Dow-Jones Industrials (1200 p.m.) 954.29 S & P Composite (1200 p.m.) 101.97 ANTHONY W. TABELL DELAFIELD, HARVEY, TABELL Cumulative Index (11/4/76) 601.39 AWT/jb No statement or expresSion of opinion or any other mallcr here'n contaIned Is, or IS 10 be deemed to be, directly or mdHcclly, on offer or the So!JCllollon of on offer to buy or sell any sec;unly refelTed 10 or mentioned The moIler IS presenled merely fOf the convellcnC(I of the subscriber WhIle we believe the sources of our Informahan to be reliable, we In no way repreent or guarantee the accurocy thereof nor of the statements mude herein tny action to be token by the subscriber should be based on hiS own investigation end information Janney Montgomery SCali, Inc, as a corporation, and ItS officers or employees, may now have, or may later toke, poSlhons or trades m respecl to any secunlles mentioned In Ihls or ony future nsue, and such poSition may be different from any Vley,s now or hereafter e;o;pressed In Ih,s or ony other Issue Janney Montgomery Scott, Inc, which IS registered With the SEC as on Investment adVisor, may give adVice to Its Investment adVISOry ond other customers Independently of any s'clements IT'ode ' thn or In any other Issue Further Information on any security menlloned herein IS oVOIlable on request